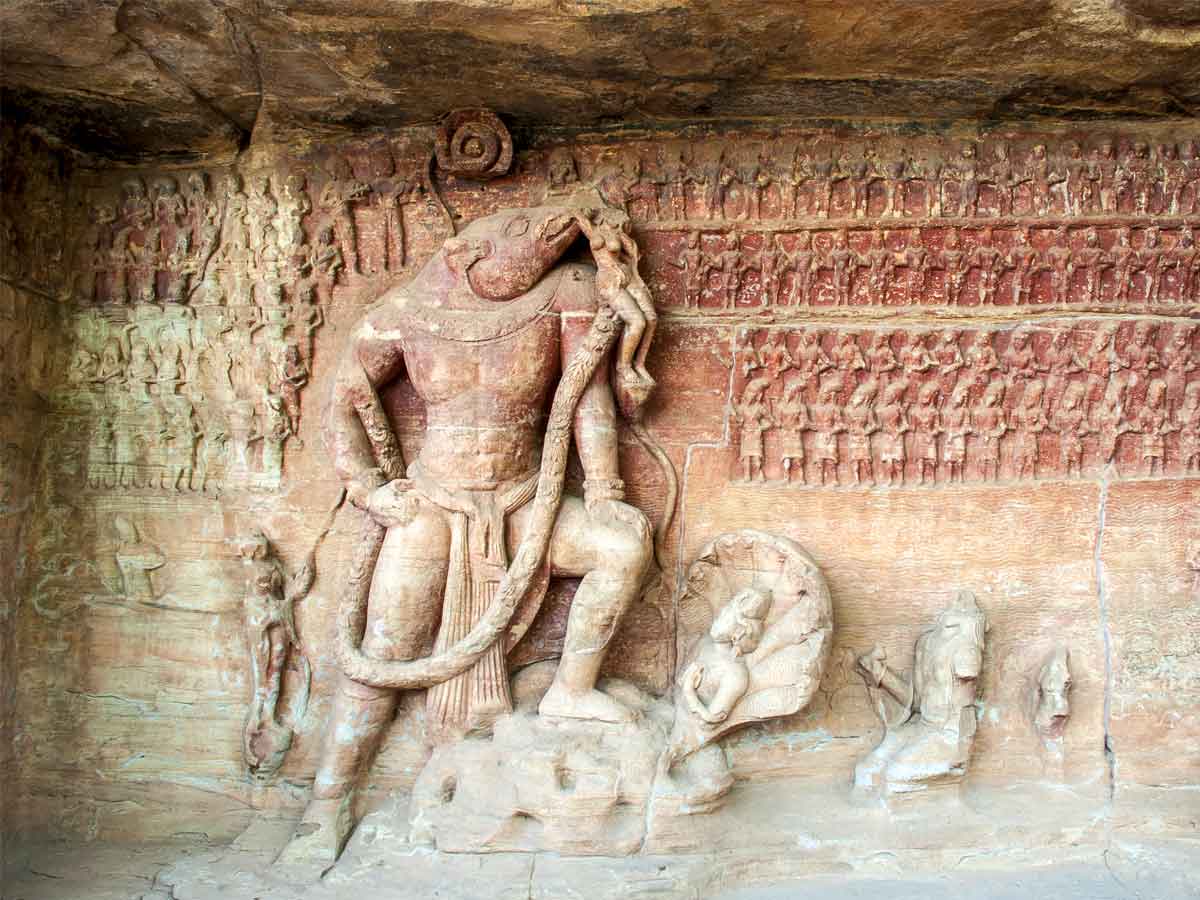 The Udayagiri Caves are a group of 20 rock-cut caves in Vidisha, Madhya Pradesh, that date to the early 5th century CE. They are home to some of India’s oldest surviving Hindu temples and imagery. They are the only site whose inscriptions can be shown to be related to a Gupta dynasty king. The Udayagiri hills and caves, one of India’s most important archaeological sites, are protected monuments overseen by the Archaeological Survey of India.

If the Sanchi collection of monuments is a virtual history of Buddhism in India, the Udayagiri Caves near the ancient city of Vidisha are said to be the site of the oldest known types of Hindu imagery. The Udayagiri Caves in Sanchi contain sculptures, symbols, and inscriptions from the Gupta Period, which dates from the 4th and 5th century CE. The most well-known is the colossal Varaha Image at Udayagiri. Continue reading to learn more about the fascinating Udayagiri Caves in Madhya Pradesh.

The iconography of the Udayagiri caves includes Vaishnavism (Vishnu), Shaivism (Shiva) and, Shaktism (Durga and Matrikas). They are noteworthy for an old massive relief sculpture depicting Vishnu in his incarnation as the man-boar Varaha, saving the earth symbolically symbolised by Bhudevi clinging to the boar’s tusk, as related in Hindu mythology.

The site has notable Gupta dynasty inscriptions from the periods of Chandragupta II (c. 375-415) and Kumaragupta I. (c. 415-55). In addition to these, Udayagiri features a number of rock shelters and petroglyphs, as well as ruined structures, inscriptions, water systems, fortifications, and settlement mounds, all of which are still being studied by archaeologists.

“The Udaigiri caves are an outstanding example of the native art style.”

After conquering the Shakas in the 4th and 5th centuries Vikramaditya created these. The major motivation for the construction of these caverns and the installation of statues of various deities appears to be the promotion of Jainism among the general public. There are a total of 20 caves, two of which are directly related to Jainism and the rest eighteen to Hinduism. The ruins of the Mauryan, Shunga, and Naga kingdoms, as well as Buddhist stupas, have been discovered at the top of the caverns.”

The Udayagiri Caverns complex is made up of twenty caves, one of which is devoted to Jainism and the others to Hinduism. The Jain cave has one of the oldest known Jaina inscriptions, dating from 425 CE, while the Hindu caves include inscriptions dating from 401 CE.

There are several sites in India with the same name, the most noteworthy of which are the Udayagiri Mountain in Rajgir, Bihar, and the Udayagiri and Khandagiri Caves in Odisha.

The beautiful Varaha in Cave number 5 is the most memorable and enduring sight that will haunt you long after you leave the Udayagiri Caves Vidisha. When you stand in front of the gigantic Varaha panel, your breath will almost certainly come to a halt for a few seconds. This remarkable piece of art chiselled in rock, housed in a cave that is more of a niche, tells volumes about the artistry of the workers who designed and created it thousands of years ago.

This rock-cut sculpture is said to be one of the oldest Hindu iconographies, dated from the fourth and fifth century. Aside from its massive scale, the Varaha artwork dazzles with its intricacy. The Varaha sculpture depicts one of Hindu mythology’s most renowned episodes. This episode is described in several ancient Vedic writings, notably the Yajurveda’s Taittiriya Samhita. Vishnu is referred to as Prajapati in this verse. Varaha, as Vishnu’s avatar, emerged later on.

Cave number eight, also known as Tawa Cave. The cave’s roof is flat and formed like a girdle, hence the name is self-explanatory (Tawa). Aside from the peculiarity of its design, the significance of Cave 8 is an inscription on its back wall mentioning the visit of Chandragupta II and his minister Virasena. The Sanskrit inscription is generally translated into English as follows:

“The miracle known as Chandragupta is the inner light that, like the sun, which fills the heart of the educated yet, is rare to discover among mortals on earth.” The minister […], whose name was Virasena, became a saint among great monarchs as a result of him. He was a poet who lived in Pataliputra and was well-versed in grammar and jurisprudence.

In Cave 13 of the Udayagiri Caves, a colossal sculpture of a sleeping Vishnu in the traditional Sheshashayi or Anantashayana pose welcomes you. Vishnu is seen sleeping on the coil of a primordial serpent, Adishesha, with his chariot, Garuda, nearby. His head is resting on one of his four hands’ palms. The figurines of two men prostrating respectfully at Vishnu’s feet may be observed. It is said that they are pictures of Chandragupta II and his minister, Virasena. This Vishnu sculpture is among the earliest known sculptures of Vishnu in this stance. This Vishnu Cave is also known as the God’s Gorge.

The closest airport to Udayagiri and Khandagiri Caves is Bhubaneswar Airport, which is just approximately 10 kilometres away. It has daily flights too many major Indian cities, including Chennai, Kolkata, Delhi, and Hyderabad.

The nearest major railway station is around 6 kilometres away, at Bhubaneswar. It provides strong rail access to all the state’s major towns as well as all of India’s major cities.

Udayagiri and Khandagiri Caves are easily accessible through National Highway NH-5 and public transportation buses. Buses to Bhubaneshwar town run on a regular basis from Puri, Cuttack, and other important neighbouring cities. Local transportation is provided from Bhubaneswar cabs to the caverns.