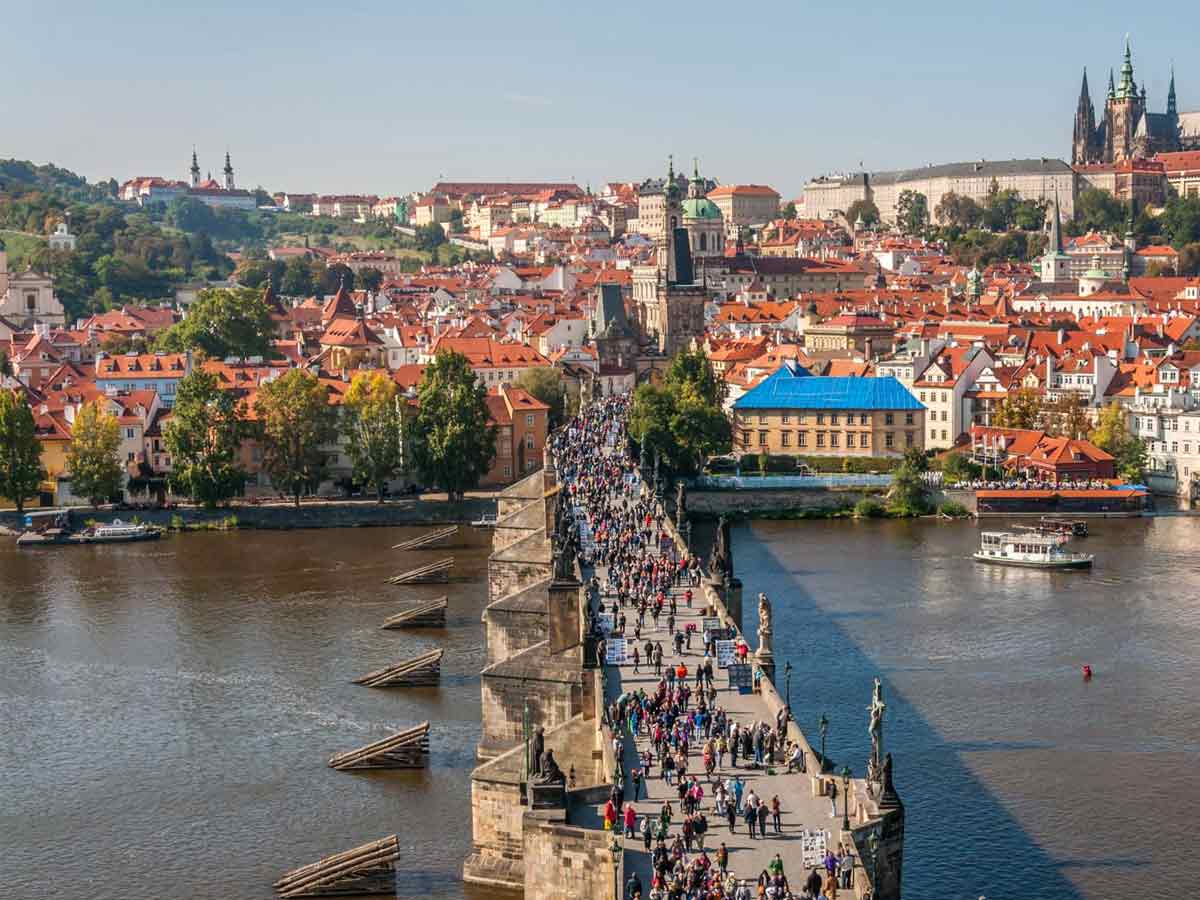 Prague, the capital city of Czech Republic, is one of the most beautiful and touristic cities in the entire Europe. Also known as the “City of Hundred Spires”, Prague is famous for its colourful historic architecture, picturesque bridges, query cafes and a very romantic atmosphere. With so many picturesque corners in the city, it is one of the most preferred European holiday destinations for travellers.

It is an equally great place for history buffs with hundreds of years of glorious history whose tales are told in museums across the city. The city is bisected by Vltava River and connected by several bridges, including the very famous pedestrian Charles Bridge, which is one of the many jewels on the crown that Prague is.

Spread across an area of over 496 km square, the city is a perfect European getaway. From lively music to exquisite dishes and from cobblestone streets to picture postcard bridges, there’s so much to explore in Prague. The nightlife here is amazing as well, with so many clubs waiting to welcome you with your favourite drinks and lively music.

You can start your day in Prague by taking a day tour of all the historic sites and churches and end it with your favourite drink in one of the clubs or a walk on one of the city’s bridges where you can click some memorable pictures.

The city can be explored well in 2-3 days, but even if you have one day in hand, you can cover most of the important spots in the city.

Walking On The Charles Bridge:

Prague and its romance with the Charles Bridge is a never ending love story and you can be a part of it while in the city of romance. The 14th century bridge is among the key tourist attractions in the city. It was commissioned in 1357 to replace an older bridge. The name Charles was given to the bridge only in the 19th century. A trip to Prague can’t be complete without taking a walk on the famous bridge. It is also one of the most photographed spots in the city and you should also get yourself clicked atop the bridge.

The Prague Castle is among the most important historic structures in the city. In the Castle District, the breathtaking architectural marvel once served as the seat of Czech rulers. It now serves as official residence of the President. While one can explore the grounds of the castle free of cost, an entry ticket is required for visiting key buildings such as Basilica of St George, Golden Lane. If you have limited time, you can skip the long queues and go for a guided tour at a special price.

Golden Lane is like a European dream. One of the most Instagrammable spots in the entire Europe, the Golden Lane, is within the grounds of the castle. As per the legends, alchemists used to look on these streets before they found a reaction to turn ordinary materials into gold. Dotted with colourful European style buildings, Golden Lane is one spot in Prague that you can’t afford to miss. Have an hour in hand while exploring the street. A picture on the street is enough to make people jealous of you.

A Cruise on the Vltava:

Vltava river bisects Prague, and it is over this river that the famous Charles Bridge exists. Offering an exquisite and unique experience to visitors, the combo of Vltava and Charles Bridge can make anyone fall in love with the city. Exploring Prague on foot is one thing, but looking at the city from Vltava is something that you will remember for a lifetime. You can book a slot from many cruises within the city that offer a meal with the package. A 2 hour cruise is ideal for exploring the scenic beauty of Prague while enjoying a meal.