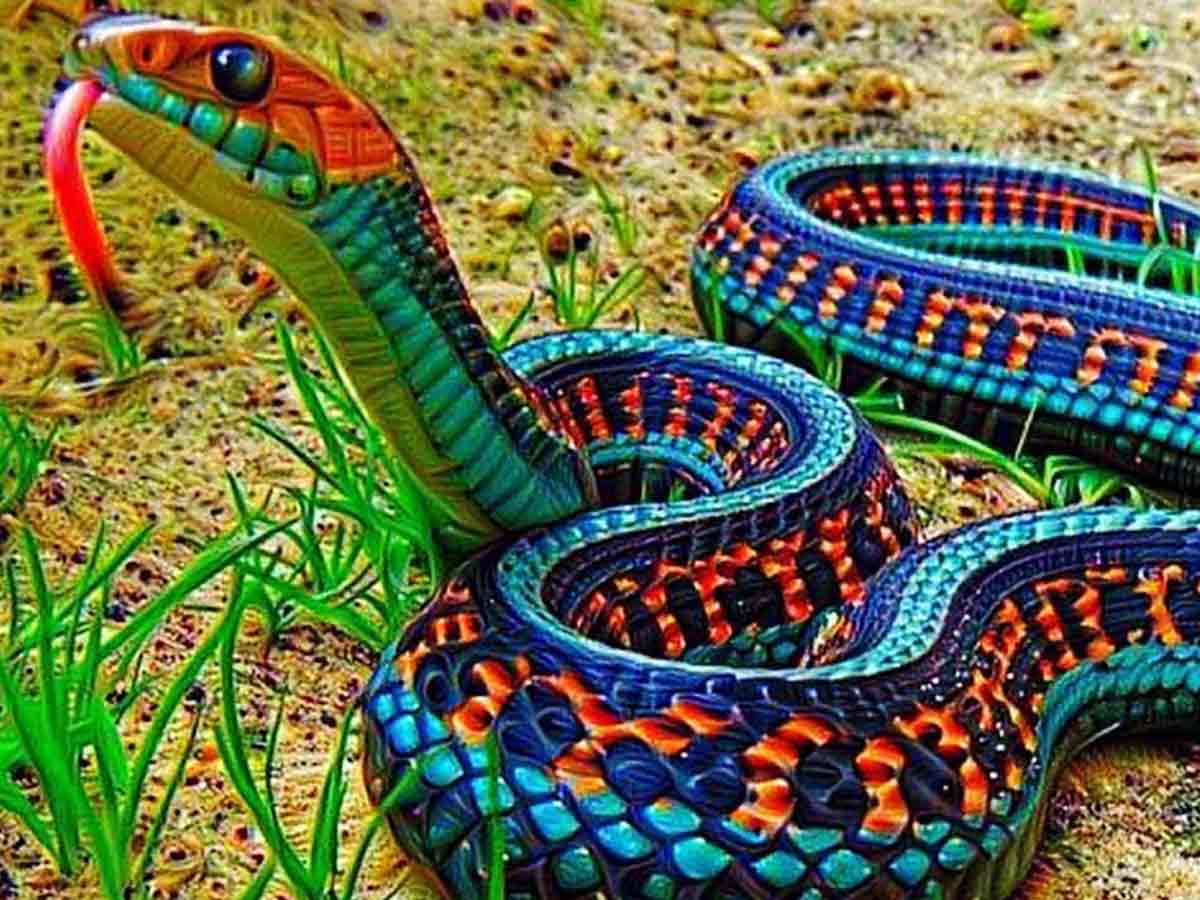 The Summer season has arrived, and so have the Snakes. This is the favorite season for this creepy crawlies to come out of their burrows, sunbathe and procreate. Summer is also the season that witnesses the most snake killings in India. Although justified, it is best to avoid needlessly killing something. Snakes come under the family of reptiles and consist of venomous and non venomous snakes.

Often, it is the non venomous snakes that get killed after being mistaken for being venomous. Snakes cannot be non-venomous in people’s minds. That is not the case, however. Although snakes can be deadly and dangerous, not all of them threaten humans, and it is not fair that we kill whatever snake we see because of our fears. Non venomous snakes are large earthworms that are just trying to survive!

There are 270 kinds of snakes in India. However, only 60 of them are venomous. The remainder, on the other hand, is completely harmless.

Here is a list of the non venomous snakes in India so that innocent snakes won’t be killed needlessly. 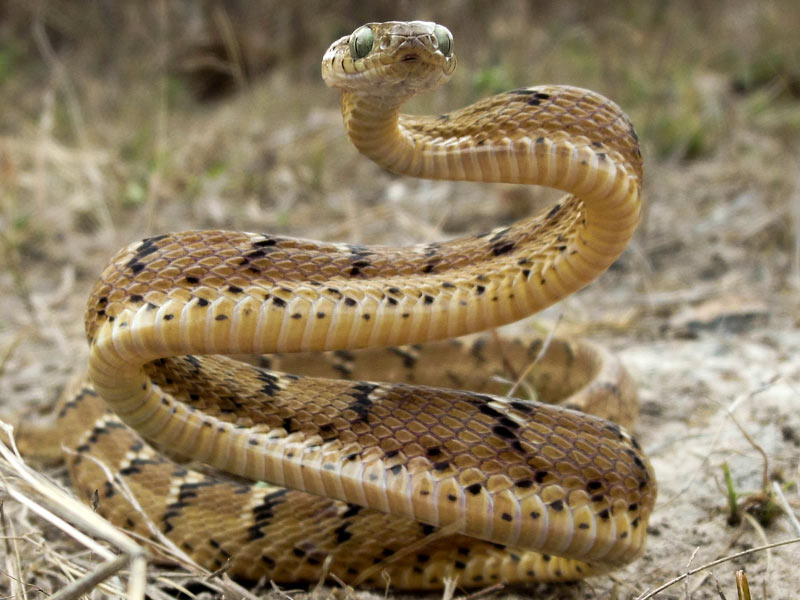 Because of its triangular head form, the common cat snake is possibly the most immediately recognized Indian snake. It is wider than its neck. This snake is primarily nocturnal, and it is most active between the hours of midnight and dawn. It is also known as the Indian gamma snake. Mixed deciduous forests are where they can be found. Spends the day wrapped up in Palmyra fronds, bushes, thatched roofs, tree bark, or stone. The species is oviparous, with a female laying 3-10 eggs in a clutch in August in North India.

In holes and under rocks, the eggs are laid. They are somewhat poisonous and have neurotoxic venom, but it isn’t particularly effective against humans. When startled, it may coil tightly, strike multiple times, and shake its tail. Except for the Andaman and Nicobar Islands, the common cat snake is found across India and most South Asia. This species is found in Chhattisgarh, where it is usually found in deep forest regions. So yet, just a few human encounters have been documented. Because the common cat snake is minimally venomous and resembles a saw-scaled viper, it is vulnerable to human killing. This species is also threatened by road deaths and deforestation. 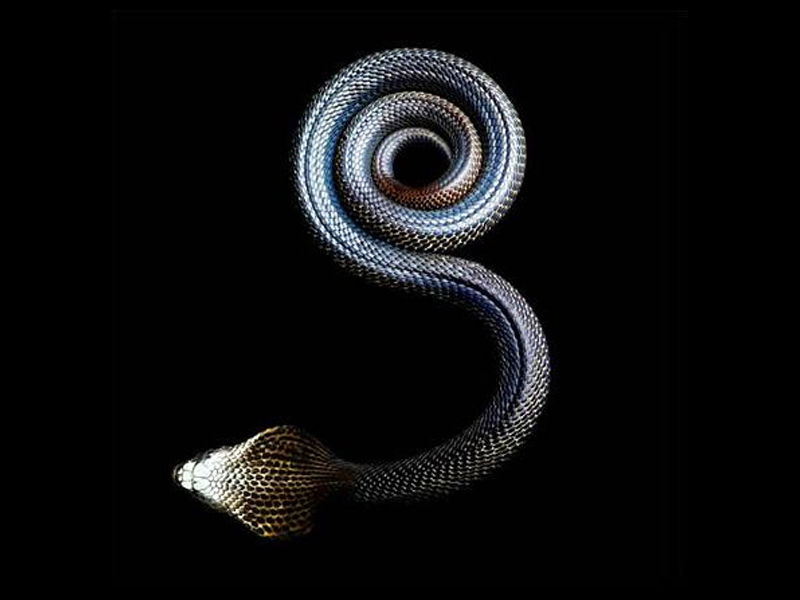 The Indian Rat Snake, also known as the Dhaman Snake, is also known as the Oriental Rat Snake. Although this snake can survive in practically any environment, it prefers to live in cities. They also prey on rats since they are the most plentiful. The Indian Rat Snake has a short head and a lengthy body. It has large eyes with circular pupils and moves quickly. Colour varies greatly and cannot be identified just based on color.

The Lip scales are separated by vertical black lines, while the Underside often has noticeable dark cross-bars. Their colors range from pale yellow, olive, and brown to grey or black. When confronted, the species is normally wary and tries to flee. If confronted, they inflate their throat and forebody with snarling and strike hard. The bite of a large rat snake can be extremely painful, even though it is completely harmless.

The Indian rat snake can be found in various environments, including coastal, dry, wet, mountainous, open fields, and forest. This species prefers to hide in rat holes and termite mounds. It is one of the snakes that has adapted successfully to human-dominated environments.

Myths about them stinging by their tails and their likeness to cobras rendered them susceptible to humans. It is also killed due to a lack of awareness. They are still plentiful in Chhattisgarh and other locations, despite their use in the skin trade. 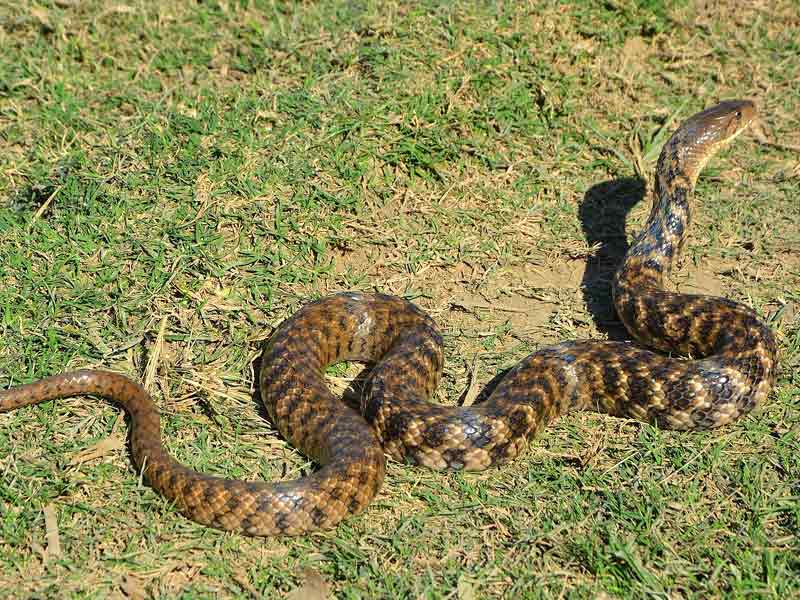 They have a blackish surface with patches of greenish, yellow, circular, or brown color. Freshwater bodies and paddy fields are where they can be found. Frog eggs, tadpoles, and water invertebrates are eaten by young snakes; larger snakes devour fish, frogs, and rodents. Mating occurs most commonly during mid-summer, but it has also been reported after the monsoon.

It is oviparous, laying eggs in the shade, barks, and other places from December to March. When they are cornered, they bite quickly. When cornered and threatened, they become aggressive. When threatened, it flattens its head and inflates the ribs of its neck to dissuade the threat. Except for the Andaman and Nicobar Islands and higher altitude portions of India, it has been recorded throughout India and Southeast Asia.

Typically, the species can be found on damp surfaces, such as river or pond edges. Because of its lack of awareness and aggressive temperament, it is prone to human slaughter. Although this species is prevalent in human-dominated areas, wetland acquisition for development projects is gradually destroying its habitats. 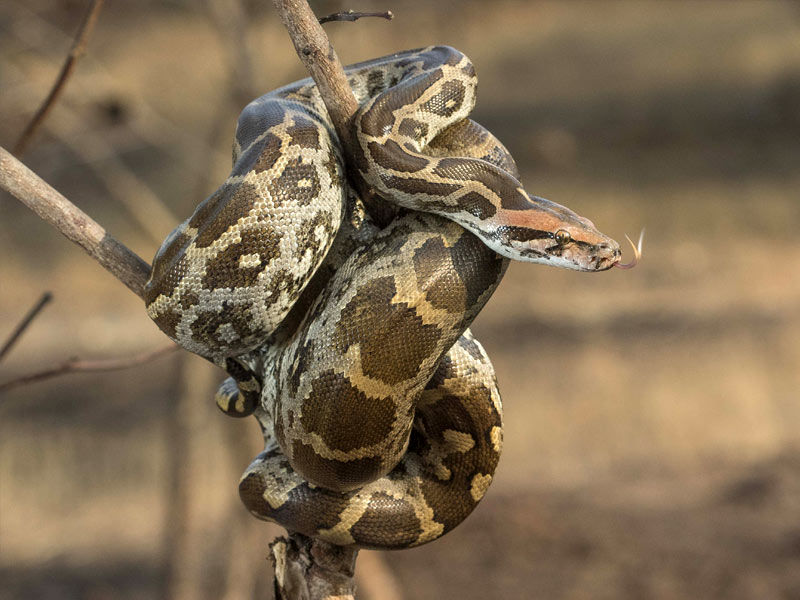 In India, the Indian Rock Python is referred to as Ajgar. It can be found in wetlands, meadows, and rocky areas, among other places. The spectacular Sundarbans’ mangrove forests, as well as the Eastern Himalayas, are their native habitats. The majority of prey is warm-blooded (rodents, fruit bats, birds, jackals, deer, and other small mammals). The species is oviparous, and females lay 100-107 eggs each clutch in March-June after mating.

For 60-70 days, the female remains with the eggs. They have been spotted coiling on the eggs for the duration of incubation. Although this species is non venomous, its bite can be extremely painful. This species faces two major threats: skin trafficking and illegal pet trade. They are also experiencing habitat loss as a result of land conversion for agricultural and construction uses.

Also read, The Mythological snakes of all time 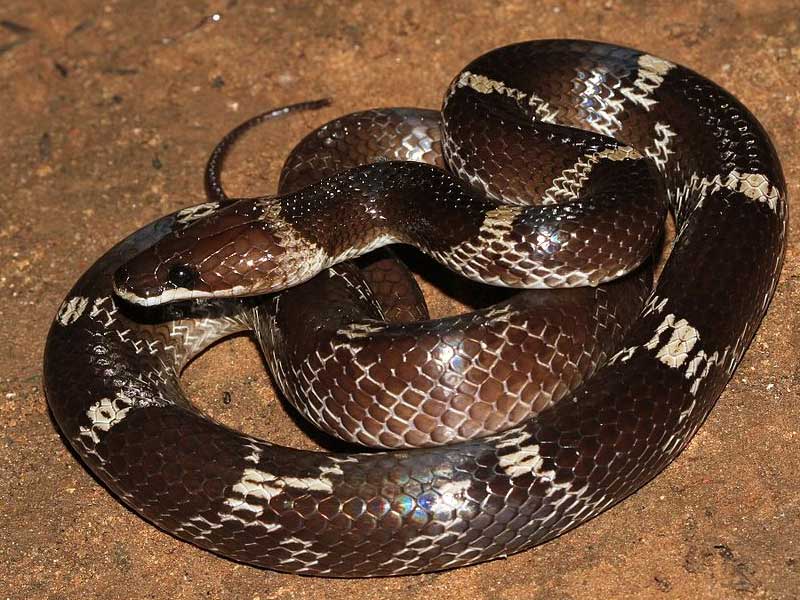 The well-known colubrid snakes include the Common Wolf Snake. The Andaman Islands are the most prevalent location for these. Rodents, skinks, and geckos are among their favorite foods. In addition, they prefer to hide behind heavy things or in small cracks. The oviparous common wolf snake lays a clutch of 5-7 eggs around December-January in South India and March-July in North India.

When aroused during handling, this non venomous creature bites. Humans are unaffected by this species. The distribution of this species has been documented throughout India, including Lakshyadeep, but not in the Andaman and Nicobar Islands. Pakistan, Bangladesh, Nepal, Sri Lanka, and Myanmar have also been recorded. They are present in most sections of Chhattisgarh and are a common species in human-populated areas. 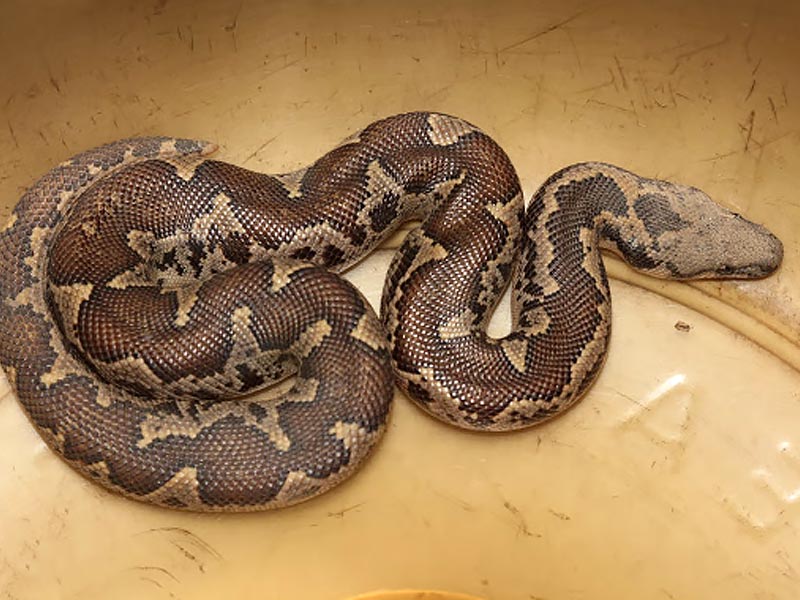 In Hindi, the Common Sand Boa is known as a “do-Muha” snake. This is since its tail resembles its head. These snakes can be found in gardens, agricultural regions, brick heaps, rat burrows, and rock piles. They are likewise non venomous and devour small animals, rats, geckos, and birds, among other things. They are endangered because of the skin trade, pet trade, and overuse of snake charmers.

This species is demonstrated by charmers because it has two heads. In addition, traffic deaths and land conversion for agriculture raise the chance of extinction. There are records from all around India, but the drier regions are the most common. The species can be found around water bodies in sandy environments. At higher elevations, it is non-existent. The range of this species has been documented in Pakistan and Nepal. 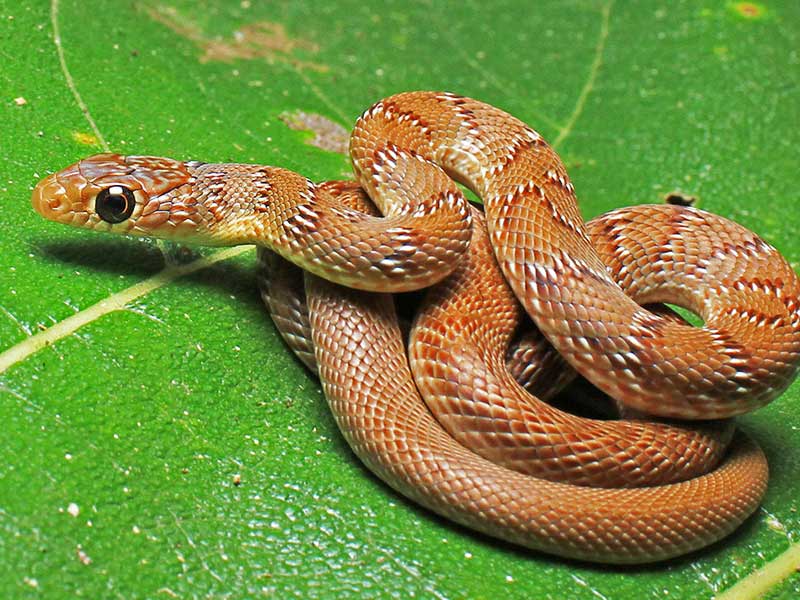 The natural habitat of this snake is shrubbery, hedges, and tall grass. This snake is likewise a member of the colubrid family. It is unusually small compared to other non venomous snake species. This non-venomous snake and will only bite if you try to catch it. They display hoods to deter predators and danger. Otherwise, when provoked, it flees. The banded racer may be found all over the state of Chhattisgarh.

The species can be found in dry deciduous woodlands and urban areas. People are startled by its cobra-like habit of displaying hood to warn of threats, and these snakes are killed due to this misunderstanding. The destruction of its habitat puts its population in jeopardy. 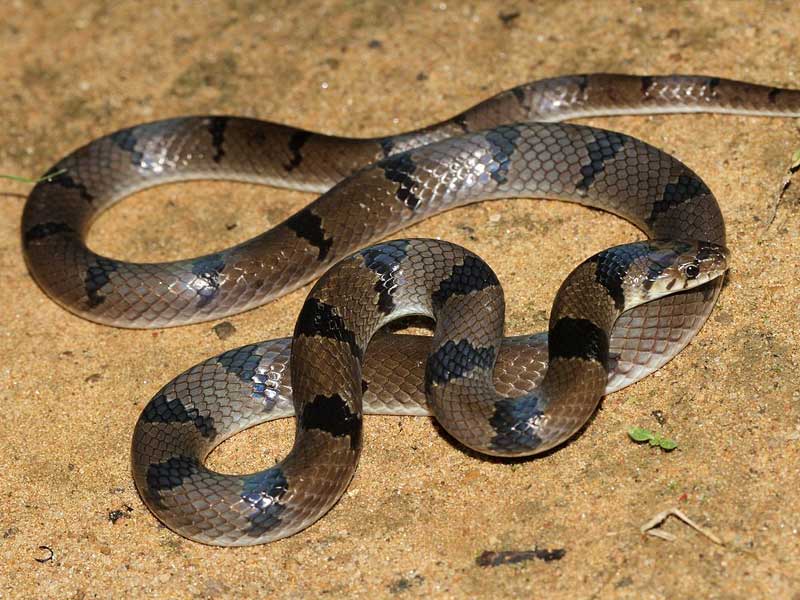 The banded Kukri is a member of the colubrid family. These snakes can be found in large numbers in India’s Himalayan region. However, the Banded Kukri Snake can also be found in Bangladesh, Sri Lanka, Nepal, and Bhutan. Reptile eggs, larvae, insects, and rodents are the most common foods they consume. They can be found in the Sal forest and close to human settlements. Mating takes place in the middle of the summer, and the female lays three to nine eggs in late June. When threatened, they flatten their bodies and are normally docile. However, they might strike sideways if provoked.

Because this species is non-venomous, it poses no harm to humans. Except for the northeast, the Andaman and Nicobar Islands, and greater altitudinal ranges, distributions are known from continental India. Pakistan, Bangladesh, and Sri Lanka have all reported sightings of this species. They are mostly found in forests; however, they can also be found near human settlements. This species has been found in the Dhawalpur range of the Udanti-Sitanadi Tiger Reserve in Chhattisgarh. 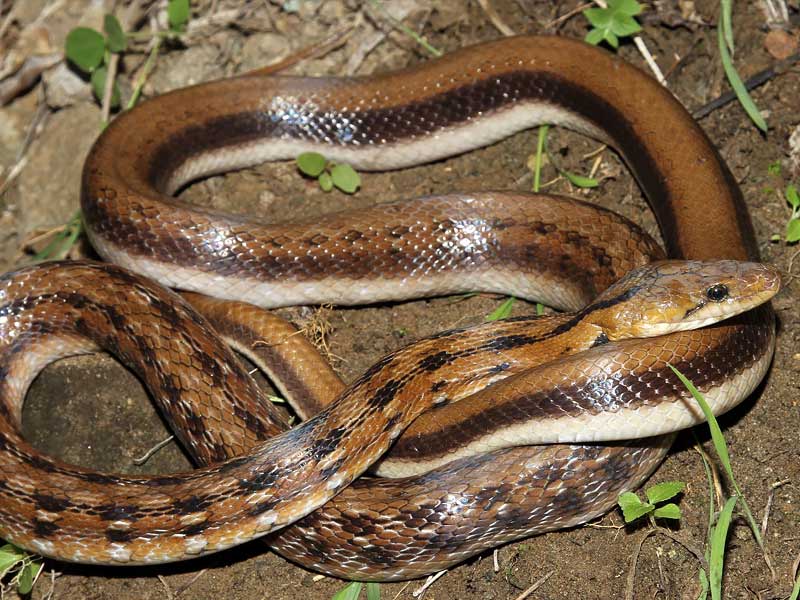 Vishakhapatnam is the most prevalent location for the common trinket snake. They can get violent if they detect a threat approaching them, which is why it’s important to keep an eye on them. Their size is medium, and they can be found in Pakistan, Nepal, Sri Lanka, and Bangladesh at higher altitudes. They coil their bodies into an S form and repeatedly strike if they feel threatened. It can inflict a painful bite when provoked. Because this species is non-venomous, it poses no harm to humans.

This species can be found across India, from Jammu and Kashmir (Poonch) north to Manipur and the Naga highlands in the northeast. This species’ habitat ranges from mixed deciduous forests to urban areas. Jashpur, Rajnandgaon, Gariyaband, and other districts have a lot of them. Because of its aggressive nature, it suffered at the hands of humans. Some of the factors that endanger this species include roadkill and deforestation. 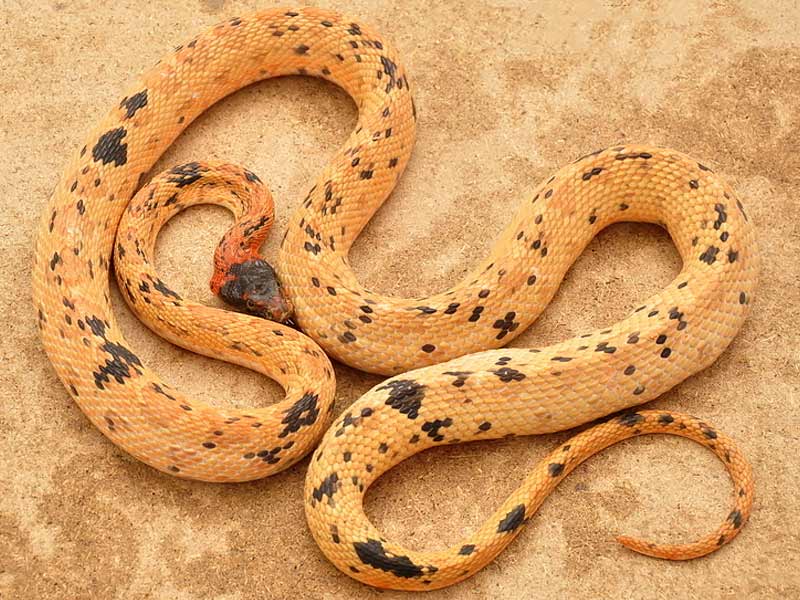 Another non venomous snake found in India is the Black Headed Royal Snake. They are mostly found in India’s semi-deserts and deserts. Because these snakes are nocturnal, they are most active at night and also prey during that time. Black-headed Royal is the largest member of the Colubrid family on the Indian subcontinent.

With a body length of up to 2 meters and a magnificent yellow-orange and black coloration, this species is considered a symbolic snake of Western India. It has two or three distinct morphological shapes in patterns throughout three life phases. Adults have a reddish-brown or orange color with more or less black patches across the body. From Kutch (Gujarat) to non-Himalayan areas of Jammu & Kashmir, it can be found in the deserts and semi-deserts of northern-western India. Nepal and Pakistan are also home to them.