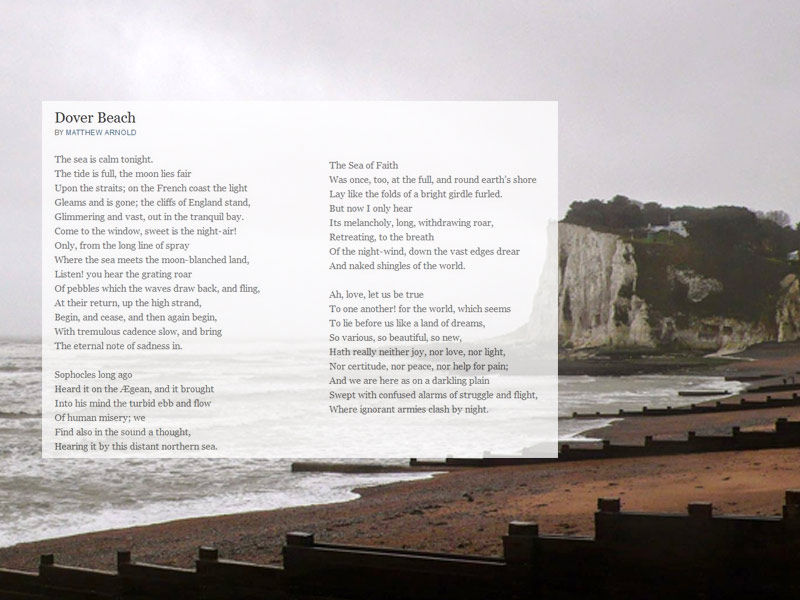 Speaker in the poem sees Christianity as being unable to withstand the development of scientific discoveries. The poem comprises four stanzas containing a variable number of lines each. They range in length from six to fourteen lines in the length. Moreover, there is no consistent rhyme scheme in the whole poem and the poem is written in an irregular iambic pentameter.

The poem, Dover Beach, by Matthew Arnold is a poem that laments the loss of the true faith in Christianity in England in the mid-1800s as science captured the minds of the public. The speaker in the poem is believed to be Matthew Arnold himself. The poem begins with the description of a quiet and calm sea out in the English Channel. Speaker in the poem is standing on the Dover beach and is looking across to France where a small light can be briefly seen but then it vanishes. This light here symbolizes the diminishing faith of people in England over Christianity.

In the whole poem, the poet has crafted an image of the sea receding and returning to land with the faith of the world as it changes with time. But at this point, the sea is not retuning; it is receding farther out into the strait.

Faith is used to encompassing the whole world that holds the populous tight in its embrace. The poem, Dover Beach, concludes pessimistically, making it evident to the readers that all the happiness and beauty that one may believe they are experiencing is never true. The whole world we live in is actually without the peace, help, or joy for those who are in need and the human race is too getting distracted, but its own ignorance to witness where true assistance is needed anymore.

Loss of faith and certainty:

The poem was written by Matthew Arnold in the Victorian era. The poem laments the loss of religious faith that is the result of the advancement in science and technology. The poem, Dover Beach, senses the historical turn and finds this change echoed in the transitional figure of the beach- the blurry border between the land and the sea. Poet in the poem asks its readers to consider what is lost in the movement of mankind away from the certainties of the Christian faith.

Poet has equated the loss of faith to the loss of certainty. Dover beach itself seems to embody this loss, in its sight and sounds both. The descriptions of the sound of pebbles on the beach turn out to be charming at first, but they mask the ‘eternal note of sadness. In the poem, the sea symbolizes two different ideas, the major shifts in the fabric of the society and the slow and repetitive movements of the sea symbolize the gradual but inevitable loss of faith.

Dover Beach is an attempt by Arnold to capture the complexity of human experience is just one part of the natural world instead of its center. Poet looks at the scene that appears to be beautiful on one hand and is a powerful reminder of nature’s indifference to mankind. The sea and the beach both have played a prominent role in the poem.

The next theme that is visible in the poem, Dover Beach, is love. With the retreat of the religion that is causing a crisis in religious faith, the poet in the poem turns to love as a reply to the loss of God. The poem suggests that perhaps love between the people can compensate for the loss of faith and connection between God and mankind.

However, this classic piece of poetry doesn’t end on a positive note. It ends with casting doubt on the idea that love will actually save the day.