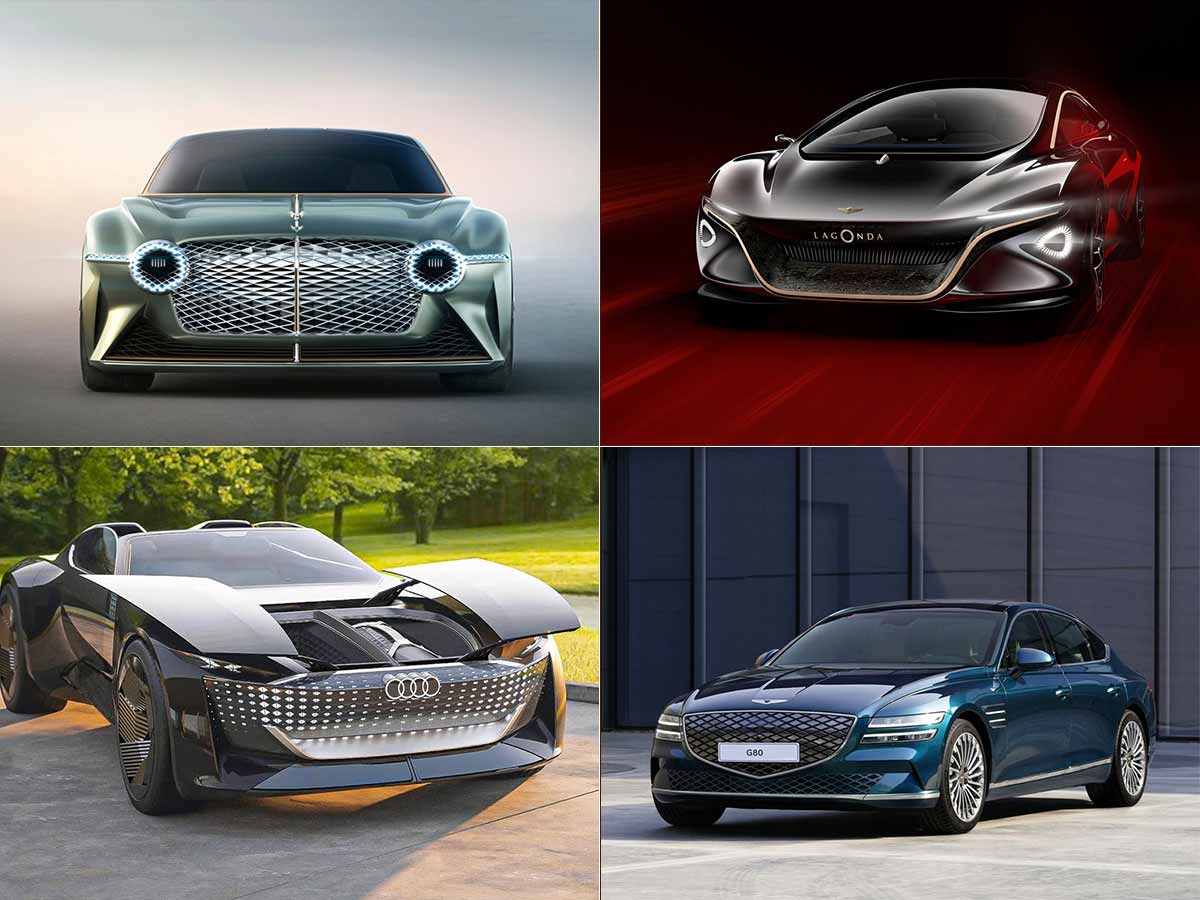 It’s been an interesting decade for concept cars. Retro style is still popular, but often it’s just a clumsy attempt to use nostalgia to ease people into the notion of electric drivetrains. There are also incredibly futuristic conceptions that attempt to reinvent the wheel (literally), but it’s always a cyclical thing. Finally, there are the fantastic idea vehicles.

Concept cars are an odd and wonderful kind. Their motivations might range from simple test mules too far-fetched design showpieces. They never fail to fascinate when they are introduced at exhibits or design contests, since, as concerned as we are with the present moment, the future ultimately consumes most of our attention. As a result, concept cars are the ideal solution, serving as a peek of what may be.

These elusive unicorns, however, seldom make it to production as you see them; instead, they’re frequently softened or watered-down, tailored to current trends so that they don’t defy the established Quo. And it’s a travesty. Rather than being concealed or regarded as an unwanted bystander, these vehicles should be praised for their daring and often-challenging designs. After all, concept cars herald in each new age of automotive principle.

In the 1950s, General Motors introduced and popularised the concept cars, which were later imitated by other automotive manufacturers. The notion of vehicles refers to how cars may look in the future and what technology they may have. For constructing concept cars, there are no limits to imagination, and innovators can push the envelope.

Introducing a new concept cars is always thrilling. Although most of them never make it into production, at least not in the form they are presented in, they frequently give a vital look into the brand’s future in terms of design and technology. But what makes a concept car memorable? We look back at some of the finest concept cars to ever grace a motor show exhibit and explain what makes them so unique.

Here are the most intriguing concept cars to have appeared on show floors in recent years.

The BMW GINA concept, which debuted in 2008, is one of the most memorable. It has a fabric-like external body that can change shape based on the speed of the automobile and is resistant to temperature changes and water. The headlights are shown in the same way that the eyelids disclose the eyes.

The form-shifting Chris Bangle created the BMW GINA (Geometry and functionality in ‘N’ Adaptations) idea as a break from traditional design concepts and standard manufacturing procedures. Whereas most vehicles’ bodies are constructed of metals, carbon fibres, or plastics, the GINA concept’s body is built of a special polyurethane-coated Spandex fabric skin. Besides being highly durable and temperature-resistant, the body could change shape in response to environmental conditions or at the driver’s command.

The GINA’s skin was supported by an aluminium wire frame that was controlled by a variety of electric and hydraulic actuators. As a result, the GINA only featured four “panels” in total: one on the hood, two on the sides, and one on the trunk.

Also Read, 7 Fastest Cars Ever: They Can Break the Sound Barrier

Mazda has no plans to develop a commercial version of the Furia. From the outset, the manufacturer envisioned it as a racing vehicle, meant to take part in the American Le Mans series. The Furia was decked out with extravagant red and silver aero work, as well as the number “55,” an homage to the Le Mans-winning 787B. However, a few obstacles prevented the idea from ever getting off the ground.

The Furai, which translates as “Sound of the Wind,” was the final concept car in Mazda’s Nagare series and was unveiled at the end of 2007. It participated in the American Le Mans series, with a chassis based on the C65 Le Mans prototype and a 450hp three-rotor Wankel engine. It was decked out in a spate of silver and red aero work, as well as the number 55 of the 1991 787B, which won the 24 Hours of Le Mans.

Although the Furai was planned for production, it was destroyed during a road test by Top Gear Magazine when it caught fire as it crested a hill. Its skeletal remnants are claimed to have been transported to Mazda’s Advanced Design Studio in Irvine, California.

Now that the SEMA Car Show is in full gear, it’s critical to keep one eye on the horizon and plan for the next big auto show on the schedule. It just so happens that the LA Auto Show is coming up at the end of the month, and one of the most important aspects of the festivities is the annual Design Challenge. Automotive design studios from all around the globe are encouraged to take part in this year’s theme, “Hollywood’s Hottest New Movie Car.”

The Mercedes-Benz Silver Arrow is inspired by Mercedes-W125 Benz’s series, notably the Silberpfeil racer from the late 1930s and the Uhlenhaut SLR from the 1950s, as well as the company’s Formula racing heritage. The car’s long-slung, sculptured appearance speaks to the design’s futuristic context, accentuated by a diagonally constructed, hub-less roller track allowing ‘Omni-Directional’ handling.

The Silver Arrow is an adventure waiting to unfold from the geniuses that brought you the Mercedes Biome a year ago.

Most car aficionados are constantly seeking for the next big thing, and Adriano Raeli, an Italian designer, is no exception. Although Ferrari had recently introduced the LaFerrari, Raeli felt it was appropriate to reveal his Ferrari F80 Supercar. Sure, it’s only a notion, but it’s surely one worth considering. The car will be propelled by a hybrid motor that combines a KERS technology and a combustion engine to generate 1,200 horsepower. While this sounds fantastic, the way it’s handled may ruffle more than a few feathers.

Ferrari, with its traditional red look, has also developed a series of concept cars that have wowed the globe. The red frame is kept in the F80, with a few tweaks to the structure, and it is expected to enter the market soon. The hybrid drivetrain paired with a KERS system and combustion engine powers the Ferrari concept cars. This car is believed to have a 1200hp engine. The F80 is a two-seater vehicle with twin-turbocharged V8 batteries and AI help.

Faraday Future, the California-based electric vehicle startup that has been working in a stealth mode for the past year and a half, made its first big impact this week with the debut of the FFZERO1, a high-performance concept car, on the eve of CES. With a claimed 1,000 horsepower, a 0-60 time under 3 seconds, and a peak speed of over 200 miles per hour, the sinewy machine appears more fit for a racing track than a city street.

The pilot of the FFZERO1 enters the vehicle through a canopy that opens like a fighter aircraft. The single seat cradles the driver at a 45-degree angle inside, and the Halo Safety System may give oxygen and water to the driver via a helmet. If laps around a racetrack become too boring, the FFZERO1 has self-driving functionality, and a smartphone incorporated into the middle of the steering wheel.

The Renault MORPHOZ represents the French automaker’s idea of personal sharing of electric transportation soon. It can be hybrid of a saloon, SUV, and coupe, and it represents a unique answer for sustainable transportation and the smart city ecosystems. As a result, it may change size, shape, and range according to the demands of the user. The automobile accomplishes this by switching between two modes: city and journey. The former is the most convenient for day-to-day travel at 4.40m in length, the latter grows to 4.80m to provide more capacity for long distance journeys.

The city version of the automobile is 4.40 metres and has a wheelbase length of 2.73 metres. It is powered by a 40-kilowatt-hour battery with a range of up to 249 miles, making it ideal for daily commutes to work or the grocery store. When in travel mode, the automobile expands to 4.80 metres long with a wheelbase of 2.93 metres, offering a more roomy cabin with greater legroom and capacity for two more luggage. In trip mode, an extra 50kWh battery may be added to the automobile, giving it a total battery capacity of 90kWh. This would increase the vehicle’s range to 435 miles.

Morphoz is also AI-powered, with sensors detecting and recognising the motorist as they approach before triggering a light sequence on the doors to signal identification.

The Skysphere is only a concept, but the SSP architecture’s flexibility would allow it for a comparable GT of the future. Audi Skysphere concept provides a first look at the brand’s next generation of design language. The Skysphere is an electric two-door convertible designed with Level 4 autonomy in mind, which means it can drive alone on highways with the requisite infrastructure.

The Skysphere is a pure-electric vehicle with an enlarged front bonnet evocative of historic grand touring cars. Gael Buzyn, the president of Audi’s Malibu design studio, who oversaw the concept’s development, stated that this was done to provide a “traditional feeling of prestige.”

The idea has a changeable wheelbase, which works by extending the bodywork front of the A-pillar to provide two distinct driving experiences: one as an autonomous luxury grand tourer and the other as a more focused sports vehicle.

The Skysphere is 5,190mm long when fully expanded, rides on massive, 23-inch wheels, and weighs around 1,800kg. To provide a more immersive driving experience, the wheelbase can be lowered to 4,940mm and the ground clearance is also decreased by 10mm in sports mode. The extra length is achieved by extending the part in front of the A-pillar.

Hyundai Genesis concept car offers a really futuristic appearance and feel. To put it mildly, the structure is quirky, elegant, and sophisticated. The all-electric four-seater car is enormous, opulent, and entertaining, with butterfly doors and artificial intelligence. The expanded hood, carbon fibre frame, and ample of baggage capacity round out the design. AI Genesis Assistant enables an interactive experience in which you can converse with your car and make payments from the comfort of your Hyundai concept cars.

The vehicle was unveiled at the 2018 New York International Auto Show and is an exciting statement for the Korean automaker. The manufacturer takes pleasure in the beauty and tranquillity of their newest automobile; as gorgeous as the car is, this perception may alter after a trip outside the Javits Convention Center during rush hour. The automobile is inspired by legendary grand tourers from the 1960s, with Gran Turismo proportions, a tall bonnet, and a swept-back seat–all while modernising the look to current preferences.

The appearance of this Genesis car is undeniably beautiful, with smooth LED lighting and graceful curves, but the inside of Essentia employs a mixed-material approach influenced by high fashion to produce the sensation of a cockpit. According to Genesis, “a slender centre console wrapped in Oxford blue leather bisects the interior.”