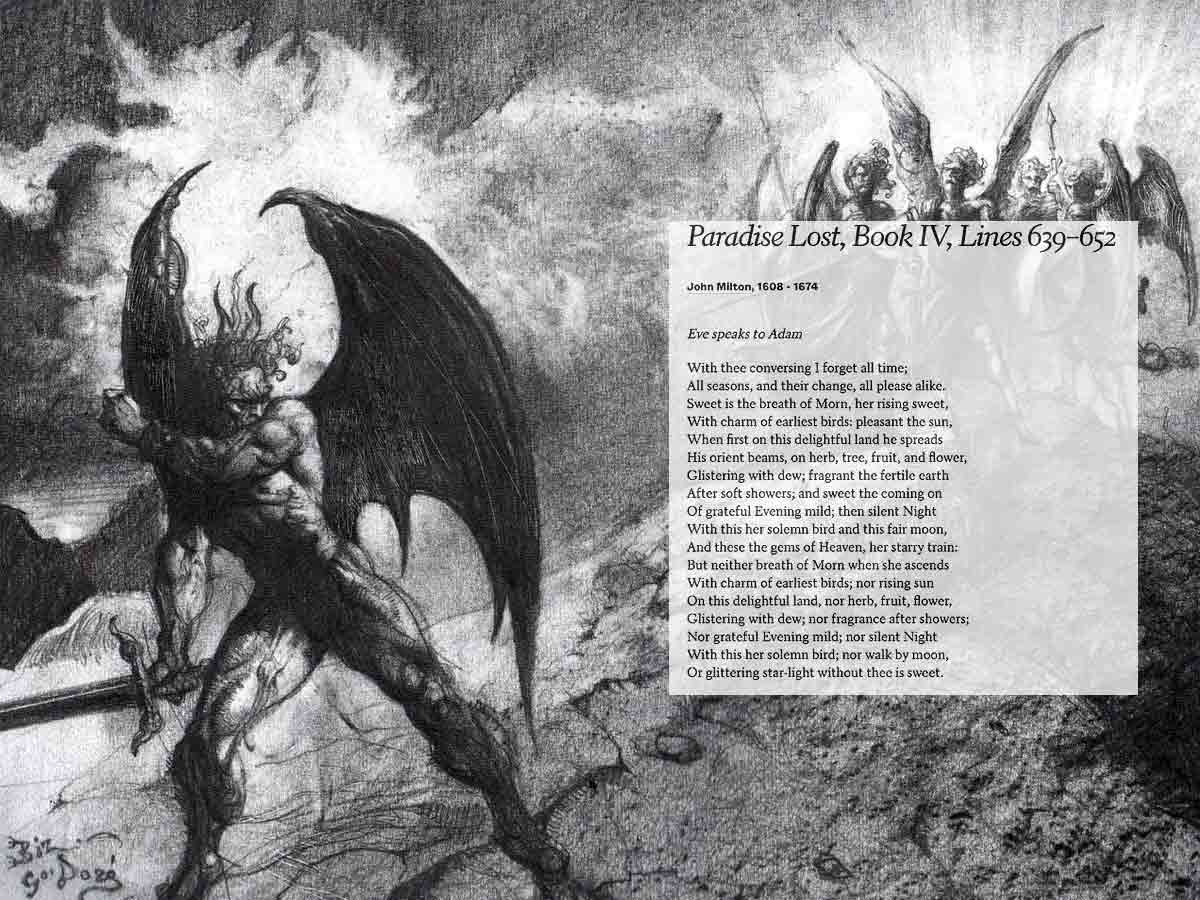 Paradise Lost is a fable or tale is drawn from the Bible; it is the straightforward and popular account of Adam and Eve’s fall from God’s favour owing to their disobedience to Him. Paradise Lost expands on the biblical account slightly. In heaven, Lucifer (who became Satan after being sent into hell) was unwilling to accept God’s dominance and launched a rebellion against His almighty power. After a horrible fight with His Angels, he was ultimately sent into hell, where he and his Angels spent nine days on a flaming lake.

Then Lucifer awoke from the flaming pitch, determined—though despairingly—that “all was not lost,” that he would get revenge on God. Arousing his pals, he tried his best to raise them to spirits, and determined that his goals might be achieved via deception rather than force; he intended to exact revenge on God by destroying his most recent creation, Eden, and the humans who lived there. The demons constructed Pandemonium, an opulent palace in which Satan convened a meeting to decide on urgent action. Moloch counselled war. Belial advocated for a sedentary existence in Hell.

Mammon recommended that hell be gently improved so that it might match and challenge Heaven. Beelzebub, the second in charge, emerged and notified God that he had created Earth and populated it with good beings known as humanity. It was Beelzebub’s idea to examine this new creation, take it, and persuade its occupants to join the cause of the fallen angels, as Satan approached Earth. Under God’s instruction, God’s angel Gabriel appointed two more angels to protect Adam and Eve, but they came too late to stop Satan. Eve’s dreams have already been impacted by him.

Eve had been enticed to sample the fruit of the Tree of Knowledge in her unusual dream. After they had done the evil act of disobedience, God sent the angel Raphael to warn them. Raphael detailed the narrative of the Great War between the deity and the wicked angels to Adam and Eve (many of such stories are told in such conversation and flashback).

He described the creation of the universe and how the Earth was formed in six days, with an angelic chorus chanting God’s praises on the seventh day. He warned Adam not to be overly curious. Adam then described how he was cautioned not to eat from the Tree of Knowledge of Good and Evil, and how Eve was fashioned from his rib.

After Raphael’s departure, Satan took the form of a sleeping snake. Eve offered they work separately while they were in grief. Adam, recalling Raphael’s warning, objected to her intentions, but Eve triumphed, and the couple split. Eve was alone until she was approached by the snake, who enticed her to taste the fruit of the Tree of Knowledge. Eve brought the fruit to Adam, who was initially frightened, but ate it out of love for Eve.

The pair experienced desire for the first time shortly after eating the forbidden fruit. They had experienced horrible embarrassment. The guardian angel arrived on Earth to render judgement. Christ condemned the snake to be a despised foe of people for all time.

He also declared Eve’s punishment: her misery would be increased by childbearing, and she would be Adam’s servant till the end of time. Adam, Christ declared, will eat in sadness, consuming food only through toil and sweat. This was the man’s curse. But he gave up God’s grace. Death and sin fled the gates of Hell to join their father Satan on Earth as Christ declared the punishment. As his messengers on Earth, Satan sends sin and death. He returned to hell to find that all of his disciples had turned into hissing snakes. God brought about significant changes on Earth.

He replaced the everlasting spring with the changing seasons; he brought about the ferocity and suffering of storms, winds, hail, ice, floods, and earthquakes; and he expelled Adam and Eve from Eden. Adam and Eve considered suicide, but Michael, God’s sent angel, gave them new hope.

He offered Adam a vision of life and death, the rise and collapse of kingdoms and empires, and also showed them how the future Adam and Eve’s progeny would go through their evil days, to the flood when God would destroy all life except the good seedlings preserved by Noah, and finally be redeemed through Christ’s incarnation, death, resurrection, and ascension as the redeemer!

The ‘invocation’ is the epic’s very first line, in which John Milton asks the Muse, the Christian spirit, to help him write effectively. The ninth book is the epic narrative’s climax, as well as a book that incorporates various thematic concerns throughout the whole epic.

The epic’s most obvious topic is justifying man’s fall, God’s punishment, and the reopening of his road of redemption to them; the epic defends how God is justified in his treatment of man during all of this. Milton has investigated the sin that led to man’s demise.

The primary cause of the fall is disobedience to God; Eve’s disobedience is because of her passion overpowering her proper reason. Adam is likewise a disobedient person; his fault is fear of loneliness, as well as the surrender of his God-given reason to passion. He quickly resolves to share Eve’s destiny out of love. Milton stresses the significance of logic. Man is noble by nature, but since he has free will, he is free to choose and capable of moral good or terrible behaviour, for which he is solely responsible. Milton does not believe in Calvinism, which holds that God has decided everything and that a man’s destiny is predetermined before his birth.

Milton is a brilliant humanist who believes in man’s independence and adventure. Milton argues God was right in leaving Adam and Eve open to evil and free to reason; only this identifies humans as superior creatures. God was also correct when he punished Adam and Eve.

As a result, the aim of Paradise Lost is to affirm everlasting providence and defend God’s method to humanity.

John Milton believes in the traditional concept of redemption. When men are redeemed by Christ, they will ascend to a higher condition than the Paradise from which Adam and Eve were cast out. As a result, Adam performed a valuable act while sinning. “Paradise Lost is a mental voyage;losing one paradise and the discovery on this planet of a paradise within ourselves, that is happier far,” Tillyard argues. The paradise in which Adam and Eve lived before to eating the forbidden apple was reminiscent of a prison. It would have satisfied God, but it would have kept man spiritually immature. Man’s loyalty to God was futile as long as knowledge was kept from him.

The virtue that Adam and Eve enjoyed in Paradise was a “fugitive and cloistered virtue,” and hence, it was not a true virtue. What man lost because of his disobedience was simply his innocence and ignorance. Controlling one’s passions leads to spiritual rebirth in men. And they will discover a Paradise within themselves that is ‘happier than far’. Man has all the abilities to work out the best for himself, to climb ahead, and to achieve paradise inside himself. This could not be accomplished by paying respect to God in Eden’s paradise while in a condition of ignorance. Eve sins because of a lack of reason, whereas Adam sins because of a lack of volition.

Milton’s writing style in Paradise Lost has been described as a “splendid style,” which shows it is elevated, serious, carefully polished, and apart from everyday speech. In fact, it is so foreign to ordinary English, and even to literary language, that Dr. Johnson accused Milton of pedanticism. The accusation is mostly based on his excessively Latinated writing. Many detractors have claimed that Milton harmed the English language. However, he has contributed to the growth of the English language as a literary language in other ways.

Milton’s “grand” style may be broken down into four or five categories: rhythm and music, word game and figures of speech, diction and decorum, syntax, and the remoteness and sublimity of language and topic.

Milton’s epic poem’s metre or rhythm is sometimes referred to be blank verse, however it is not the normal blank verse (lines in iambic pentameter without rhyme); Milton altered it to his own convenience and purpose. The lines of Paradise Lost are normally 10 syllables long, however they can have many stresses from three to eight. As a result, it would be incorrect to claim that this is accomplished through the use of typical variety approaches.

The degree and location of the stressors vary. Pauses, or caesura, is an even more significant aspect of Milton’s rhythm. The pause occurs at several points throughout the lines, and the weight of each stop varies; light or shorter pauses, as well as heavy or longer pauses, have varied impacts on the narrative.

Milton’s language is largely influenced by Latin. Even when he employs English terms, they are tinged with Latin meanings. Many reviewers have criticised his language as being excessively laborious since the words are so carefully picked. Milton ‘developed’ an exceedingly alien and pedantic English.

He uses words in such a way that they always have both literal and symbolic meanings, with both English and Latin implications. His descriptions are flowery and gorgeous. He employs visuals to emphasise the idea. With each variation in description and place, he changes his tone. That aids him in shifting emotional intensity or avoiding monotony.

Jabberwocky: A Nonsensical poem with a Beautiful Meaning