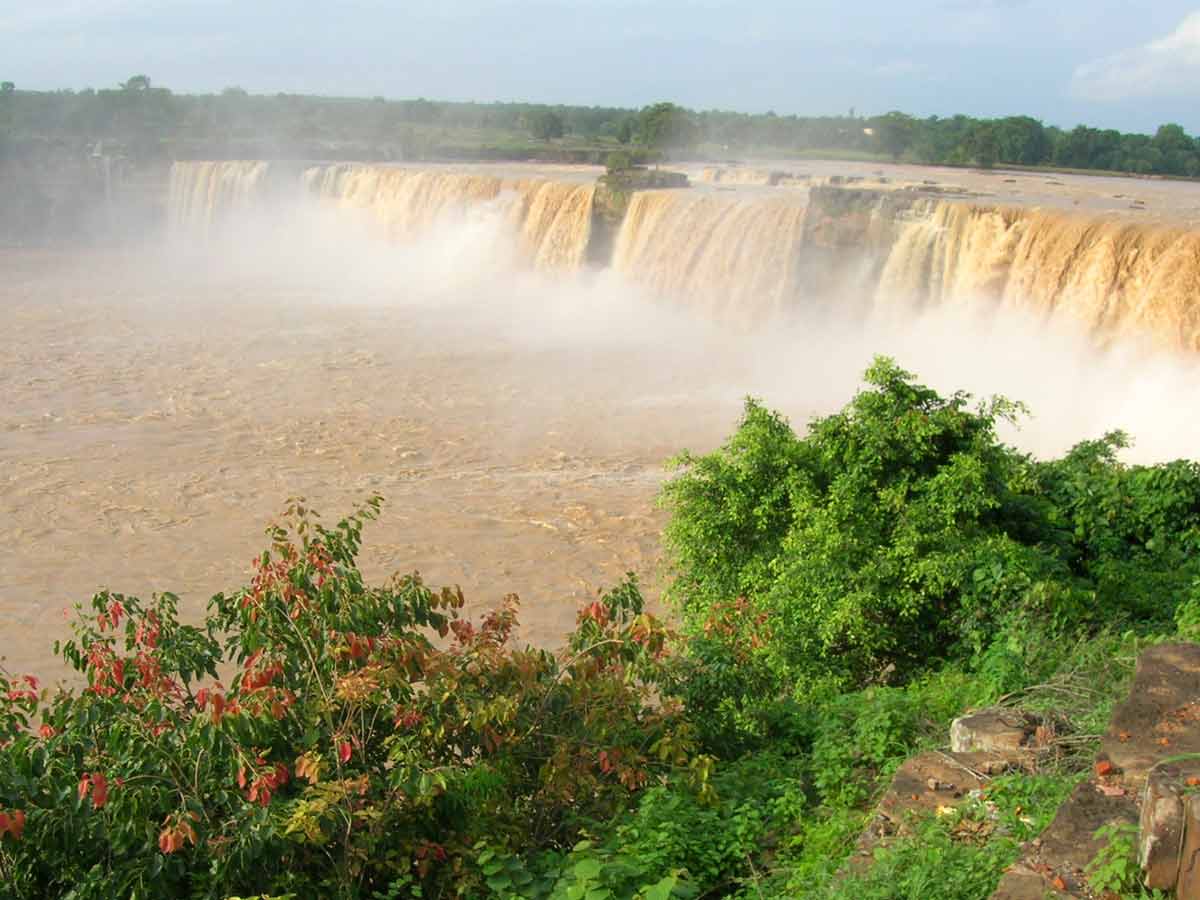 The famed Chitrakote falls, often known as the “Niagra of India,” may be seen at any season, but visiting it during the rainy season is a more exciting experience. The boom of massive water from the heaviest rain causes thrills and shudders. The splendor of these springs during the rainy season is breathtaking. It is acceptable for guests to come here between July and October.

The picturesque waterfalls are surrounded by dense forest, which adds to their natural beauty. This location has been illuminated with full lights in the river. The magnificence of the waterfall’s cascading water may be observed with the tourist light. On different occasions, at least three and up to seven streams flow from this waterfall.

There are many tourist attractions near Chitrakote Falls that are worth seeing due to their scenic beauty and cultural value. 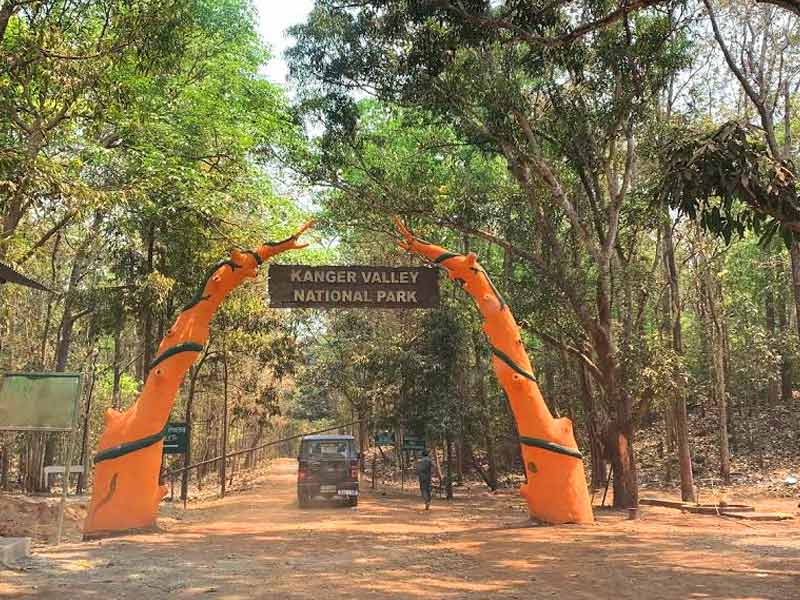 Kanger Valley National Park, established in 1982, is an exquisite joy for nature enthusiasts. The national park is only a couple of hours away from the falls and makes for an ideal day trip for those with the luxury of time.

Because the national park isn’t exactly a popular tourist site, it doesn’t get many visitors. The park’s tranquil atmosphere also makes it one of the top tourist destinations near Chitrakote Falls for couples. This means that, amid a lush green forest, the chattering of birds, and the presence of only a few other people, you can spend the day fully connecting with your wild side.

Additional Information: The biodiversity reserve contains a lot of sites worth seeing. However, all of these locations are only accessible after a short jungle journey of a few kilometers. Kotamsar (5 kilometers), Kanger Dhara (7 kilometers), Kailash Zheel, and Lake (1.5 kilometers). This versatility makes Kanger Valley National Park one of the most adaptable tourist destinations near Chitrakote Falls.

Also Read, The Majestic Waterfalls of Goa you Must Visit Once 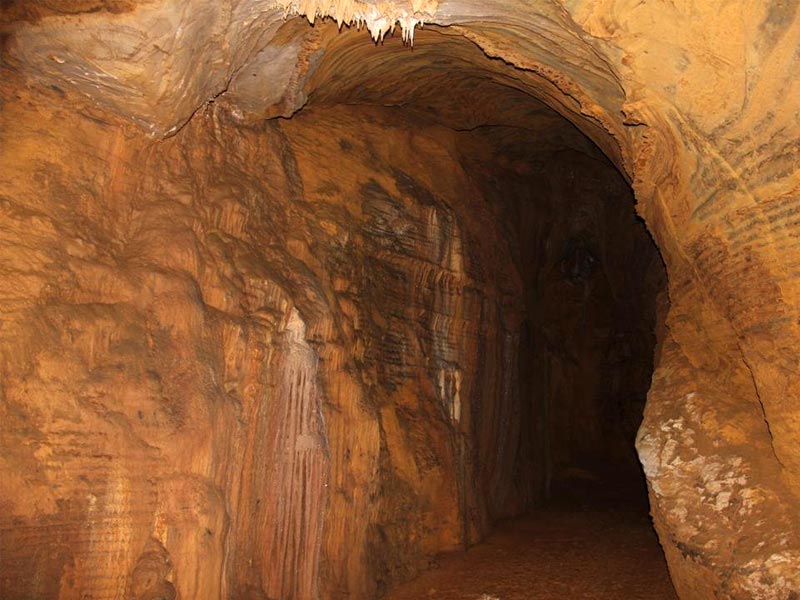 Let’s start with the recently found (1993) Kailash Caves. The cave system is short, approximately 250 meters long, but it provides beautiful vistas of stalactite and stalagmite formations. The caverns were named Kailash Caves because the stalagmite formations at the cave’s end resemble a Shivling. Another fascinating aspect of the Kailash caves is their acoustic capabilities, which emit a sound when tapped by hands.

The Kutumsar Caves are the enigmatic counterpart to the Kailash Caves. Surprisingly, the cave is also India’s most biologically investigated. The caves are 1370 meters long and 35 meters below ground level. As a result, several regions within the cave have never seen sunshine. There are also dark pools and frigid corners, and a few spots with low oxygen levels. The cave system is divided into five chambers, each with exceptional natural acoustics.

Due to monsoon rains, the caves are closed to the public between June 15th and October 31st. Because of the rain, many materials accumulate within the caves, which must be removed before reopening to guests. 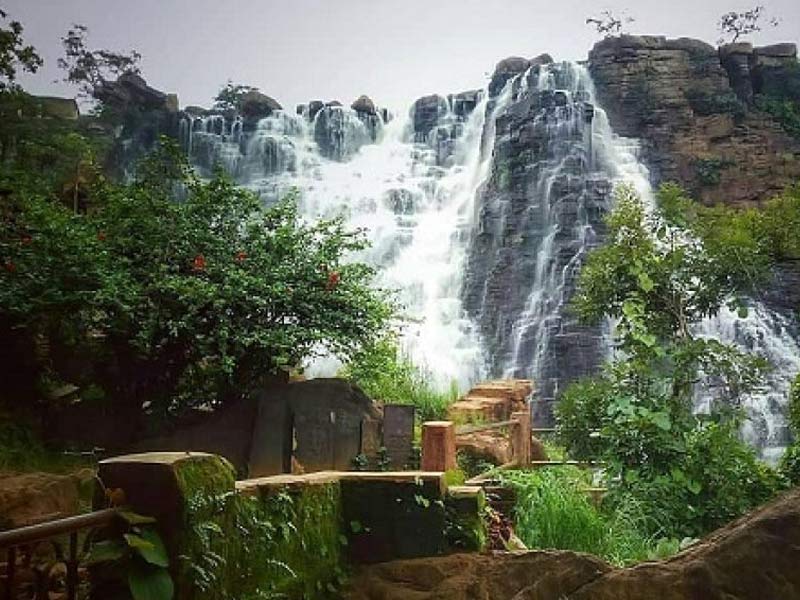 This waterfall is roughly 35 kilometers from Jagdalpur’s city center and is very close to Kutumsar Cave. The waterfall has a single drop of 91 meters (299 feet) and is truly a sight to behold for nature enthusiasts. The waterfall region is surrounded by beautiful green forests. It is a popular picnic spot among locals, making it one of the most popular tourist destinations near Chitrakote Falls.

There is an option to go to the bottom of the gorge produced by the waterfall for those wanting a little extra excitement. A total of 210 stairs must be climbed to reach the bottom. This stairway is well-kept and easy to navigate for persons of all ages and fitness levels.

Additional Information: The restaurants and shops around the Tirathgarh Waterfall have a horrible reputation for serving bad, if not stale, cuisine and expired merchandise. To avoid an event that could ruin your entire trip, we recommend bringing your own food and water when visiting Tirathgarh Waterfalls. 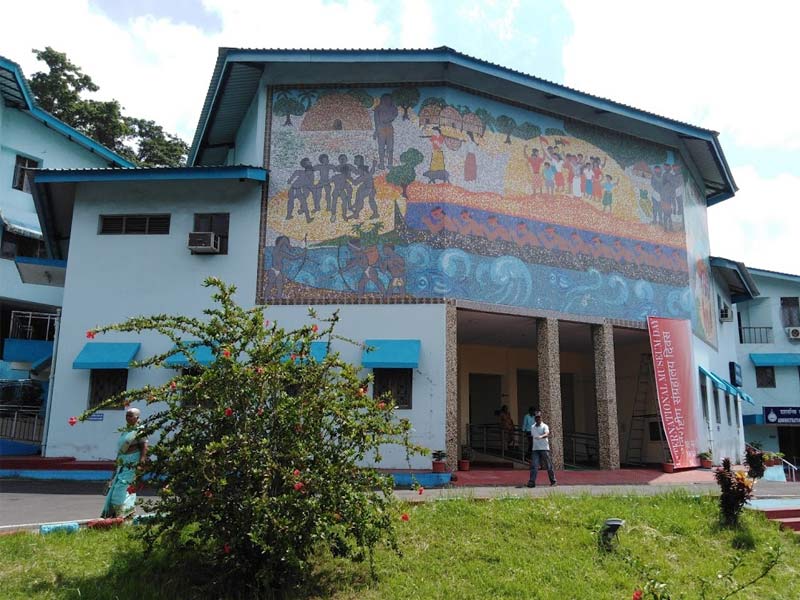 Like most other museums, the Zonal Anthropological Museum allows visitors to have a peek into a different age. Unlike most museums, however, this one focuses on the history of the homogeneous Bastar Tribe.

The museum, which opened in 1972, houses an extraordinary collection of artifacts, art, weaponry, utensils, ornaments, and clothing obtained from the tribe during the 1970s and 1980s. The museum has placed these relics in an effective manner that presents a narrative of the “Adivasi” lives of the Bastar Tribe before the onslaught of infrastructure revolution in the area.

Additional Information: The museum is located within the Anthropological Survey of India offices and is about a 4-kilometer drive from the city center. The museum is available to the public from 10 AM to 5:30 PM. The museum is closed for half an hour between 1:30 PM and 2:00 PM at this time. Visitors are not charged an admission fee. 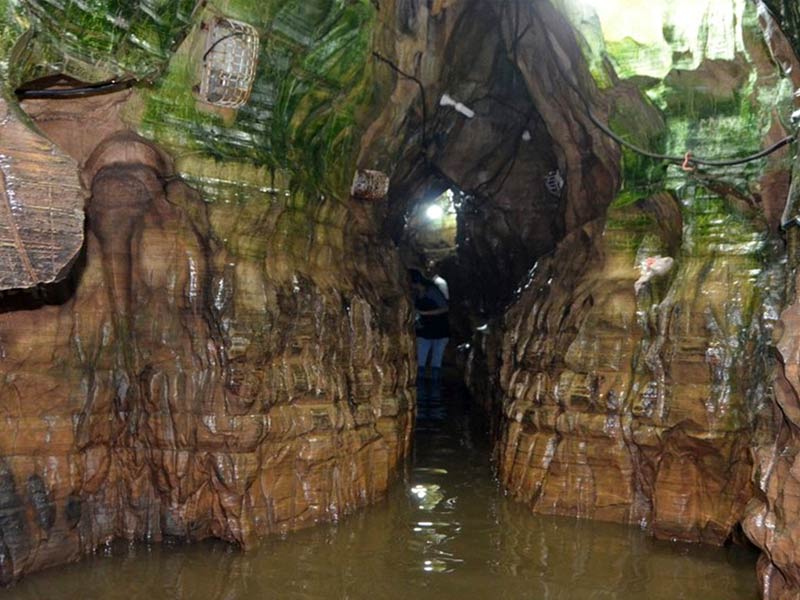 Gupt Godavari is a pair of caves with an extensive legendary history. According to Hindu mythology, Lord Rama and his brother Lord Lakshman utilized the caverns to have secret meetings.

The Gupt Godavari caverns are generally untouched by tourists, despite their grandeur comparable to well-known Indian caves such as the Elephanta Caves.

While one of the caverns has a relatively narrow entrance through which visitors may barely pass, the other contains a running torrent of water that can become knee-deep at times.

Additional Information: The legend of Lord Rama and Lord Lakshman holding secret meetings and court sessions within the caverns arose because one of the caves houses a throne-like structure that is thought to have been utilized by Lord Rama as his throne during court sessions. 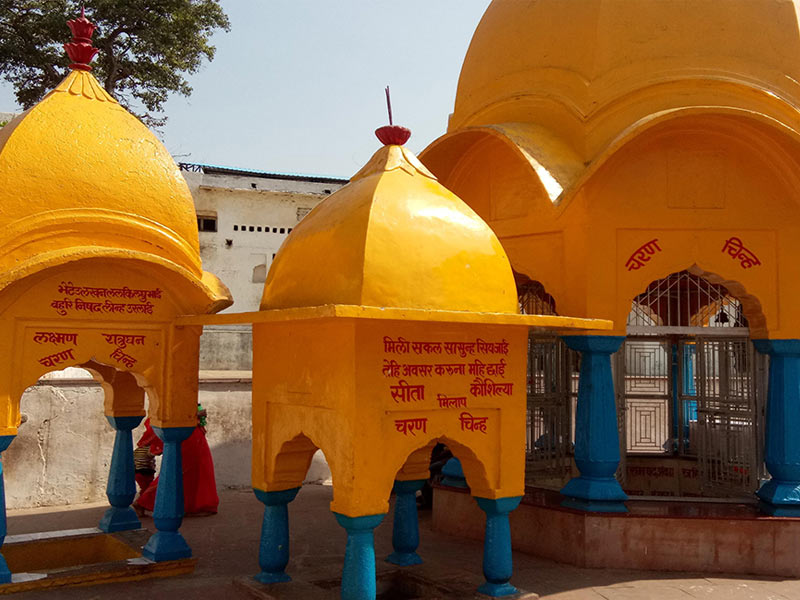 Those who are familiar with Sage Valmiki’s Epic Ramcharitmanas will recognize an event known as Bharat Milap. For those who are unfamiliar with the incident, it occurred following the death of King Dashratha, Lord Rama’s father. King Bharata, Lord Rama’s elder brother, came down to Kamadgiri Mountain to encourage his elder brother to return to their homeland in Ayodhya and recover the crown.

According to legend, this incident was so dramatic that it melted the rocks in the vicinity, leaving the footsteps of Lord Ram and King Bharata engraved in the rocks. Those who think this story unbelievable should go to the Bharat Milap Temple to see the footsteps that have been carved in the rocks to this day.

Other Information: For pilgrims, another interesting activity near the Bharat Milap temple is the parikrama (circumambulation) of Kamadgiri hill.

Also Read, Seven Unique Yet Breathtaking Waterfalls That End Up Into The Sea 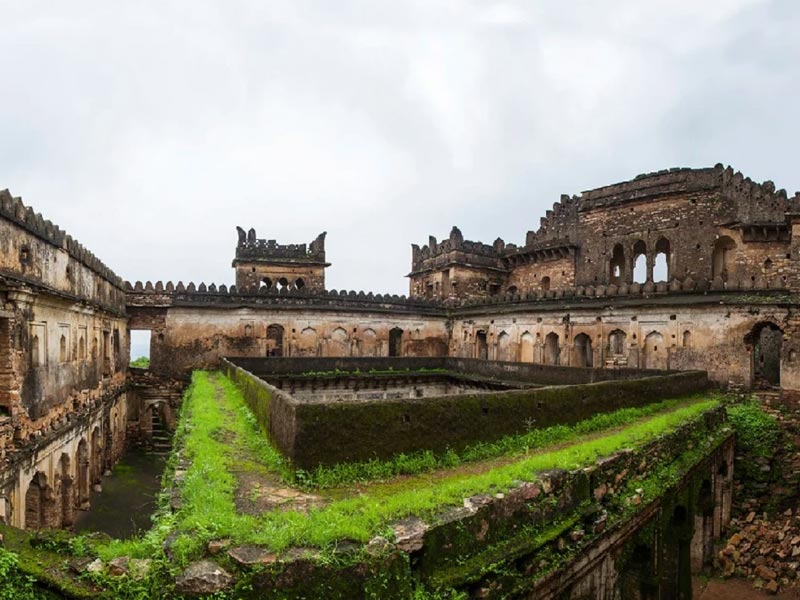 The Kalinjar Fort, about 88 kilometers from Chitrakote, is an ancient archaeological masterpiece with breathtaking views of the plains around it. The Chandela Kings built the Kalinjar fort in the 9th century, rising slightly more than 1200 feet above the ground. Historically, the fort was considered as a sign of immense power by local Indian kings, attracting a great deal of struggle over control of the area.

The fort also features several temples on its grounds, including a shrine with wall inscriptions representing Lord Shiva, Ganesha, Hanuman, and Kala Bhairon. It has thus become an important pilgrimage destination for Hindus from all over the country.

Additional Information: The Kalinjar Fort is India’s oldest remaining architectural marvel, with a rich and fascinating history dating back to the 9th century. Interestingly, struggles for control of the fort occurred as late as 1569, when Mughal King Akbar took control of the fort and eventually donated it to his famed companion, Birbal.