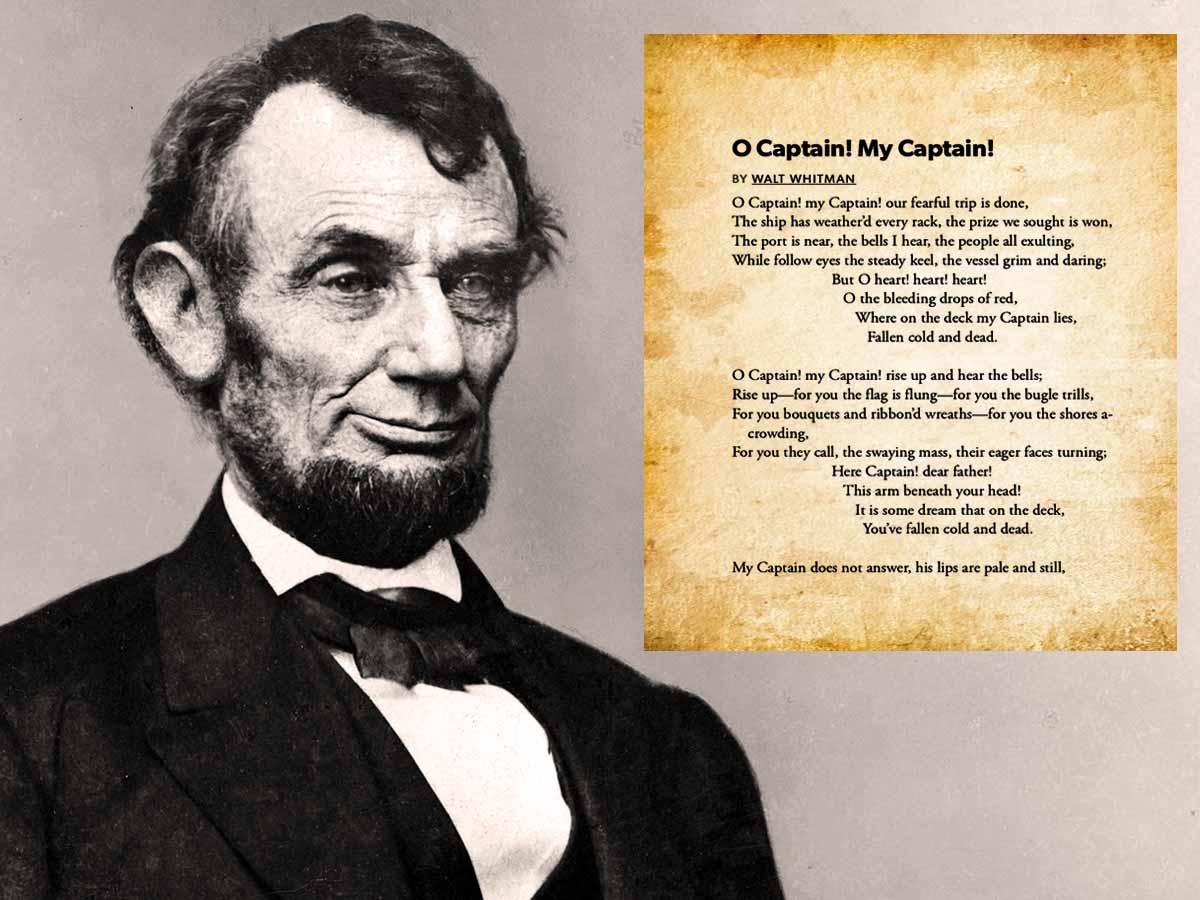 In 1865, Walt Whitman, saddened by the outcome of the American Civil War, composed the elegy ‘O Captain My Captain’ in remembrance of fallen American President Abraham Lincoln. Whitman was a fervent supporter of unionists during the American Civil War. ‘O Captain My Captain,’ Walt Whitman’s masterwork, proceeds with a solemn melancholy tone throughout. He was the new-age poet, prepared to break free from the constraints of traditional literary forms and forge new ones, much as America was formed for a different cause, shaking off the yoke of colonialism while avoiding weakening the proletarian class.

Walt Whitman employs comparable literary methods as William Wordsworth and Dante Alighieri. Walt Whitman sought to be the voice of the nation, speaking on behalf of the American people speaking in the language of regular men. As a result, he has beautifully captured the events, moods, and spirit of the period.

Summary of ‘O Captain! My Captain!’

The major theme of ‘O Captain My Captain’ Is that speaker coming to grips with the death of his fallen companion? As he examines his deceased captain on the deck at the beginning of the poem, the speaker strives to return to reality. He gradually learns that the transformation is irreversible and that life must carry on despite. The conclusion of the Civil War was a time of celebration for the American people, but it instead became a time of sadness. The end of the Civil War ushered in a time of national grief and introspection.

The poem’s title, ‘O Captain My Captain,’ refers to Abraham Lincoln as a ship’s captain. In this context, the “ship” represents the civil war fought to free the slaves. According to the poet, the ship is getting closer to the coast, showing that the conflict is ending. They have attained their desired outcome. Everyone is thrilled since it is a triumph moment.

They must recognize that their metaphorical “captain” of the ship is no longer present. When he was alive, he directed the masses with his fatherly wisdom. The nation is fatherless after his death. The poet composes the lines whilst in misery. However, the poem’s tone is not depressing. Even though they have lost Lincoln, the dream he has witnessed will not be forgotten.

What changes in the refrain’s meaning?

Three times in the ‘O Captain My Captain’ the refrain “fallen cold and lifeless” occurs. It focuses on the speaker’s emotional journey as he struggles with the death of his captain. It also carries the reader along, generating and then easing the suspense over whether the catastrophe actually occurred.

The first time it’s mentioned, we learn the Captain is no longer alive. The speaker has yet to embrace this truth. In the following phrase, he requests that his Captain “stand up.” Similarly, the second occurrence occurs immediately after the speaker expresses optimism that “it is just a dream.” The speaker acknowledges what has transpired in the third and last time. Before he can leave the ship, he must cope with his sadness.

Structure of ‘O Captain! My Captain!’

‘O Captain My Captain’ is a poem composed of three stanzas, each with two quatrains. A quatrain is a stanza of four lines. This poem is an elegy. An elegy is a type of grieving poem. Aside from that, Whitman writes, ‘O Captain My Captain in free verse form. As a result, the poem’s lines do not rhyme at all.

However, there are rare cases when rhyming can be found. In the second portion of the first verse, for example, the words “red” and “death” rhyme together. Following that, the author mostly employs iambic meter in this poem. For example, the first line is written in iambic hexameter. The next two lines are written in iambic heptameter. The second quatrain does not adhere to any metrical pattern.

Most Walt Whitman’s poems employ repetition and rhythm to create compelling lyrical beauty. He used anaphora frequently since multiple verses begin with the same word/phrase. For example, in ‘When I Heard the Learn’d Astronomers,’ the word ‘when’ appears four times to create a poetic tone.

Anaphora is typically used for joyful chanting and portraying jubilant sentiments on a poem. ‘O Captain My Captain’ uses the words ‘father’ and ‘heart’ to lament the assassination of Abraham Lincoln. The fallen ship’s commander alludes to Abraham Lincoln, while the ship alludes to the United States of America during its early years of freedom.

Themes in ‘O Captain My Captain’

Walt Whitman highlights the value of self throughout the bulk of his poems, from ‘I Hear America Singing’ to others, in which he encourages the American people to trust in themselves. He employs symbolic references to emphasize a point. He may employ inanimate items to do this. Apart from that, Whitman’s poem ‘O Captain My Captain’ explores themes of victory, sorrow, grief, melancholy, and loss.

The Idea of Individual vs Nation

“O Captain My Captain” illustrates the immense anguish and trauma that followed one of America’s most legendary political killings. It implies that the country will go on and even prosper following the death of its leader. In doing so, ‘O Captain My Captain’ questions the relationship between the individual and the larger political community, ultimately implying that the United States as a nation is a political project that can and must transcend the life of any single person—although individuals are still very important.

The poem’s extended metaphor compares President Lincoln to a captain commanding the “ship of state” during the Civil War. However, the “captain” of the title turns out to be less important to the nation’s continued prosperity and togetherness than it may appear at first. At first glance, the “captain,” President Lincoln, is only responsible for the ship’s safe return after it has “weathered every rack,” that is, survived every storm and ultimately arrived home.

The poem, however, suggests that this is not exactly the case: even in the opening verse, the speaker refers to the journey as “our scary adventure,” meaning that the community has weathered these difficulties by coming together and accepting shared responsibility.

When the populace continues to exult after their commander has died, President Lincoln was not fully necessary to the nation’s success. Even while the “Captain lays / Fallen cold and dead,” the people rejoice with bugles, bells, and public commemorations. Their sadness at the president’s killing did not prevent them from continuing their celebrations and going on with their lives.

Although the speaker states the festivities are “for you,” as the poem progresses, this appears to be dreaming. The people do not appear to require President Lincoln’s personal presence to rejoice; the commemoration of the Union’s victory takes on a life of its own, lasting as a community celebration even in the absence of a leader to command it.

However, the speaker’s conflicted attitude to the people awaiting the ship’s arrival complicates this focus on community power. He appears to have little in common with them, since his anguish separates him from the prevailing celebratory attitude.

This contrast shows the importance of people (such as the fallen “Captain”) inside collective efforts, even though those activities can still succeed without them. Each stanza of the poem is divided among the first four lines, which usually show social moments of joy, and the last four lines, which usually involve statements of the speaker’s personal anguish. This constant gap shows that, despite the delight of his larger group, the speaker feels a significant individual anguish at the death of his leader. The speaker even stays on board the ship during the communal celebrations. This physical separation emphasizes the severity of the captain’s death.

While the country goes ahead without President Lincoln, the speaker cannot join in the festivities, since the death of his leader is still painful, even if the country has survived. Finally, the poem appears to imply that collectivity is vital for the survival of the United States, but it also recognizes that individual persons play critical roles in this collective endeavor.