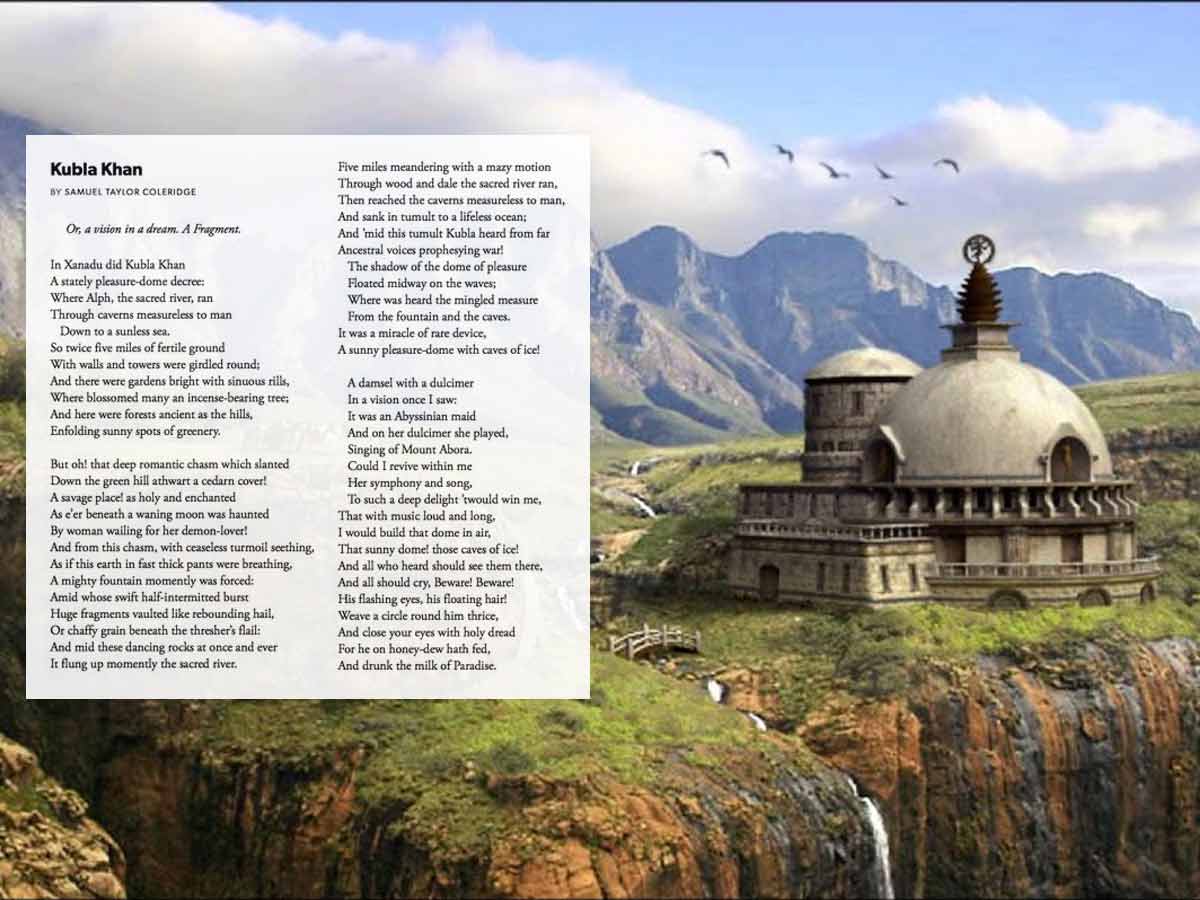 All these three poems were written by Coleridge in between the time period of 1997 and 1998. Most of the poems of Coleridge are based on supernatural characters wrought with the glamour of the Middle Ages. Kublai Khan, of Coleridge, belongs to the dream territory of art and this poem is more sensuous and colorful than the humdrum of real life.

The name and fame of Samuel Taylor Coleridge as a romantic poet is somewhere because of Coleridge’s marvelous dream faculty. The poem, “Kubla Khan” also has its origin in one of the dreams of Coleridge. He dreamt of Kublai Khan in his sleep induced by opium. In the year 1797, Coleridge read a passage about Kublai Khan and about the palace that he commanded to be built in Purcha’s Pilgrimage. After having a dream of Kubla Khan, Coleridge decided to write a poem on Kublai Khan.

Waking up, he recollected all the scenes and thoughts of that dream and took his pen to instantly pen it down. After writing only 54 lines, he was interrupted by a visitor and hence, the existing poem has remained a fragment.

TITLE OF THE POEM “KUBLA KHAN”

As soon as we read the title of the poem, “Kubla Khan” immediately brings the image of the world-famous and powerful, dictatorial Mongol emperor, Kubla Khan. He was one of the renowned rulers of what is now China. Kubla Khan was the successor of Genghis Khan and has completed the conquest of China that was started by his forefather. After achieving all this success, Kubla Khan became the first Yuan ruler of all of China.

Also Read, The Waste Land: A Beauty of poetry that Defines Death by…

The title of the poem, “Kubla Khan” undoubtedly creates the interest of every reader in the poem, as we all want to know what Coleridge has kept in his treasury for such an outstanding personality. Once you begin reading the poem, you will get to know how fond Kubla Khan, Coleridge himself, was. Through his poem, “Kubla Khan”, Coleridge has portrayed so well the Mongol emperor Kublai Khan and his highly majestic and magical palace, and spectacular and mesmerizing surroundings.

“Kubla Khan” by Samuel Taylor Coleridge is a result of the dream or vision of Coleridge about the great Mongol leader and his palace and its magical surroundings. The poem is the expression through words of a dream-soaked imagination. And at first, does not appear to possess any rational point of view and logical consistency. The whole poem reflects the images that are colored in the rainbow that is expressed in the language of haunting melody. The poem does not have any kind of moral, logical consistency of ideas, story, or allegory in it.

However, the poem, “Kubla Khan” is logical as well as rational. Both parts of the poem are connected logically. The poem has the richness of imagery, symbolism, pictorial qualities, and romantic elements. In fact, the poem is of pure romance that has all the romantic associations- hills, music of dulcimer, ancient forests, measureless caverns, Milk of paradise, and demon-lover. All these elements are concentrated within a short compass to create a good sense of mystery and awe. Besides this, the poem, “Kubla Khan” also stands by the sheer beauty of its shadowy vision.

Kublai Khan built a magnificent pleasure-dome in Zanadu on the banks of the river of Alph that flows through a deep cavern in a hill into the sea. The palace stood within the

area of ten miles of level land that is surrounded by walls with towers at the interval and containing beautiful gardens, meandering streams, and ancient forests.

From a deep cavern on the side of a green hill gurgled out a fountain intermittently throwing out the fragments of rocks and volumes of water that produce the river Alph. This stream flowed in a zig-zag manner for full five miles through picturesque scenes and at last fell into a quiet sea. Kublai Khan seemed to hear in the tumult of the stream of ancestral voices prophesying war.

In the pleasant dome, Samuel Taylor Coleridge, in his vision saw that an Abyssinian maid is playing on a dulcimer and is singing Mount Abora, He fancies that if he can reproduce that music, he will be able to build up the very pleasure-some in the air under the stress of poetic frenzy.