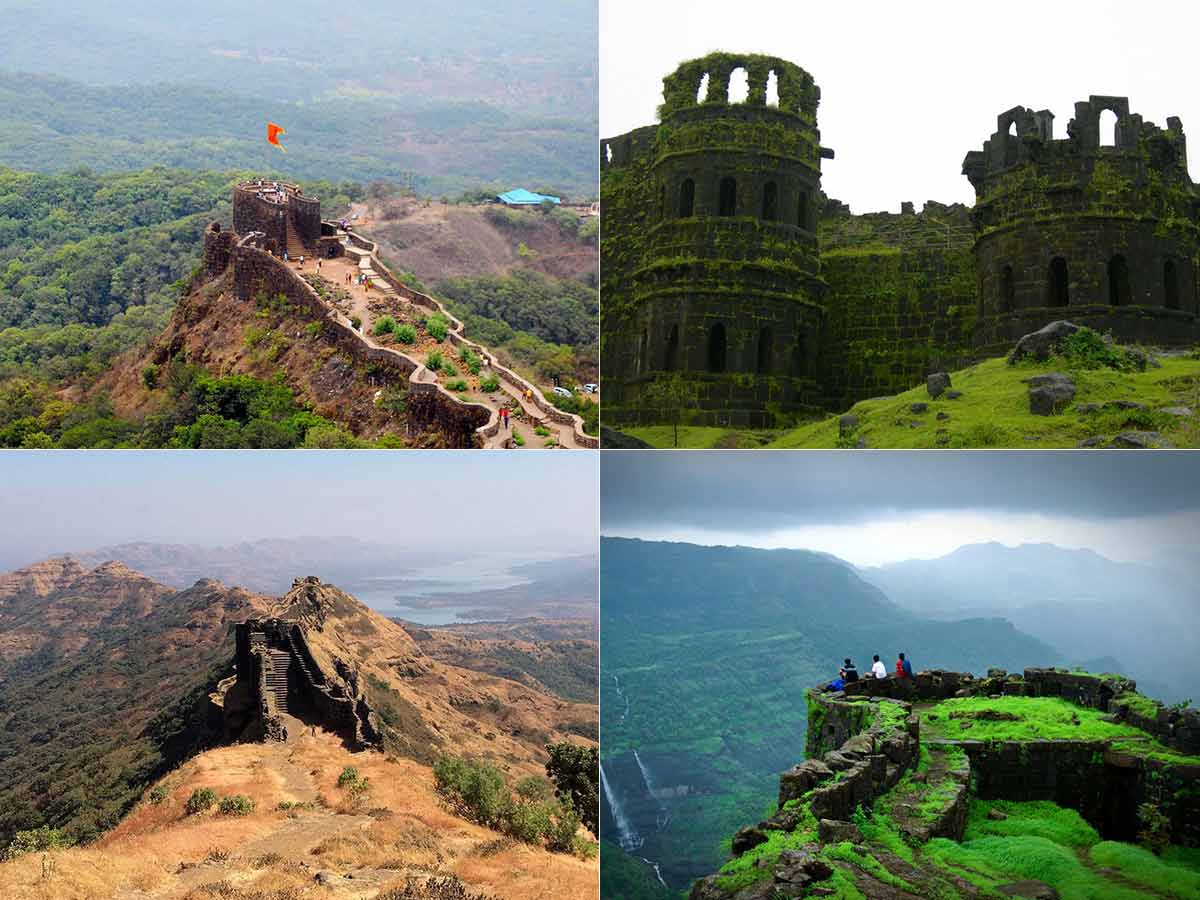 Does Maharashtra strike you as a state of forts? But, in reality, the state is home to some of the best historical forts in the country, offering scenic views, magnificent history, and a time to remember. Maharashtra is famous for its mesmerising beaches, monsoons, and, of course, Mumbai, the city of India’s dreams.

Aside from that, Maharashtra’s hill stations are well-known. However, this blog will take you on a virtual tour of Chhatrapati Shivaji Maharaja’s Maharashtra, which is rich in heritage and adorned with magnificent forts.

Here are the top historical forts in Maharashtra that you should see at least once in your life: –

When discussing historical forts in Maharashtra, the Shivneri Fort must be mentioned. It is one of the most well-known trekking destinations near Pune and has a long and illustrious history. The Shivneri Fort, built in the 17th century, is a military fortification and the birthplace of the great and mighty Chhatrapati Shivaji Maharaj, the founder of the Maratha Empire.

The Shivneri Fort is beautifully designed with rock-cut architecture, has a water system, and houses the Shivneri Caves, making use of this location since the 1st century more evident. The Mughals also eyed the fort. After being tossed back and forth between the Mughals and the Marathas, it was taken over by the British Army in 1820, resulting in the Third Anglo-Maratha War.

The Rajgad Fort, located yet again in Pune, was previously known as Murudev. For 26 years, during the reign of Chhatrapati Shivaji Maharaj, this fort served as the capital of the Maratha Empire. What makes the Rajgad Fort even more interesting is that it was built with the treasures of the Torna Fort. This is one of the highest forts in Maharashtra, perched at the height of 1,376 metres above sea level, and its ruins include caves, palaces, and water cisterns, to name a few.

The Rajgad Fort is built on a hill known as Mumbadevi Dongar, which translates to “Mumbadevi’s Mountain.” The fort takes pride in standing in such a beautiful setting. This fort’s history is both fascinating and disheartening. Interesting because Rajaram Chhatrapati, his Chhatrapati Shivaji Maharaj’s son, was born here, and disheartening because the fort is the deathbed of Chhatrapati Shivaji Maharaj’s queen, Saibai.

The Pratapgad Fort, located 1,080 metres above sea level and offering a breathtaking view, is known as the ‘Fort of Valour.’ The fort is extremely important because of the Battle of Pratapgad, and it is the subject of numerous historical discussions. This Maharashtra fort overlooks the lovely villages of Par and Kinesvar and has four lakes on its grounds. The lakes overflow during the monsoon season, and it is regarded as one of Maharashtra’s best historical forts.

The main entrance to the Pratapgad Fort is the Maha Darwaja, and the watchtower flanks it. The watchtower provides scenic views of the cliffs surrounding the forts, pleasing the eyes and justifying your visit.

The Tung Fort, one of Maharashtra’s most beautiful and well-known forts, is known for its picturesque views and enthralling treks. It is 1,075 metres above sea level and surrounded by lush greenery and beautiful tropics. The fort’s structure is peaky and oval, making it visible from a reasonable distance. Atop the Tung Fort, visitors can enjoy breathtaking views of Pawna Lake, Tikona, and Visapur Fort. Trekkers and other visitors can also visit the Tunga Devi and Ganapati Temples, located within the fort’s complex.

The Lohagad Fort is a military marvel that was one of the Marathas’ strongholds. A small range connects the fort to the nearby Visapur fort, which is built at a soaring height of 1,033 metres. It guards the Parvana Reservoir and has four gates that are still strong and in good condition. The Lohagad Fort in Maharashtra is another scenic trekking trail for adventure seekers, particularly during the monsoon season. If you take a small detour on the way to the fort, you can see the magnificent Bhaja Caves. A tar road also leads to the fort, making it vehicle accessible.

Last on the list of Maharashtra forts is the Vijaydurg Fort, one of two forts where the mighty Chhatrapati Shivaji Maharaj himself hoisted the saffron flag. The fort is known as the ‘Victory Fort’ because it represents the Marathas’ victories over their enemies. It is the oldest and most beautiful fort on the coast of Sindhudurg. It was close to Girye village and had local fishermen still use a natural port nearby. Because of its proximity to the Arabian Sea is also known as a beautiful sea fort in Maharashtra.

The Rajmachi Fort trail passes through several waterfalls, deep gorges and valleys, quaint and rustic villages, and water streams. If you’re a painter or photographer, this trail is Pandora’s box of ideas. Wait until you get to the two fortified peaks at Rajmachi, Shrivardhan and Manaranjan before you think the trail was everything. The scenery is breathtaking, and you can even witness fireflies dancing in the air during the monsoon season.

Raigad Fort, the embodiment of Maratha pride, is one of Maharashtra’s most historically significant forts. It is located on the Sahyadris highlands, 820 metres above sea level. It belonged to the illustrious Maratha monarch, Chhatrapati Shivaji Maharaj, and was dubbed the “Gibraltar of the East” by Europeans. He conquered the Raigad Fort from Rajchandraji More in 1659.

Still, the Mughals recovered the fort shortly after his death and it was later purchased by the British Empire. Despite the damage done over the years, the fort still stands majestically and will let you picture its magnificence and splendour in 1030 CE.