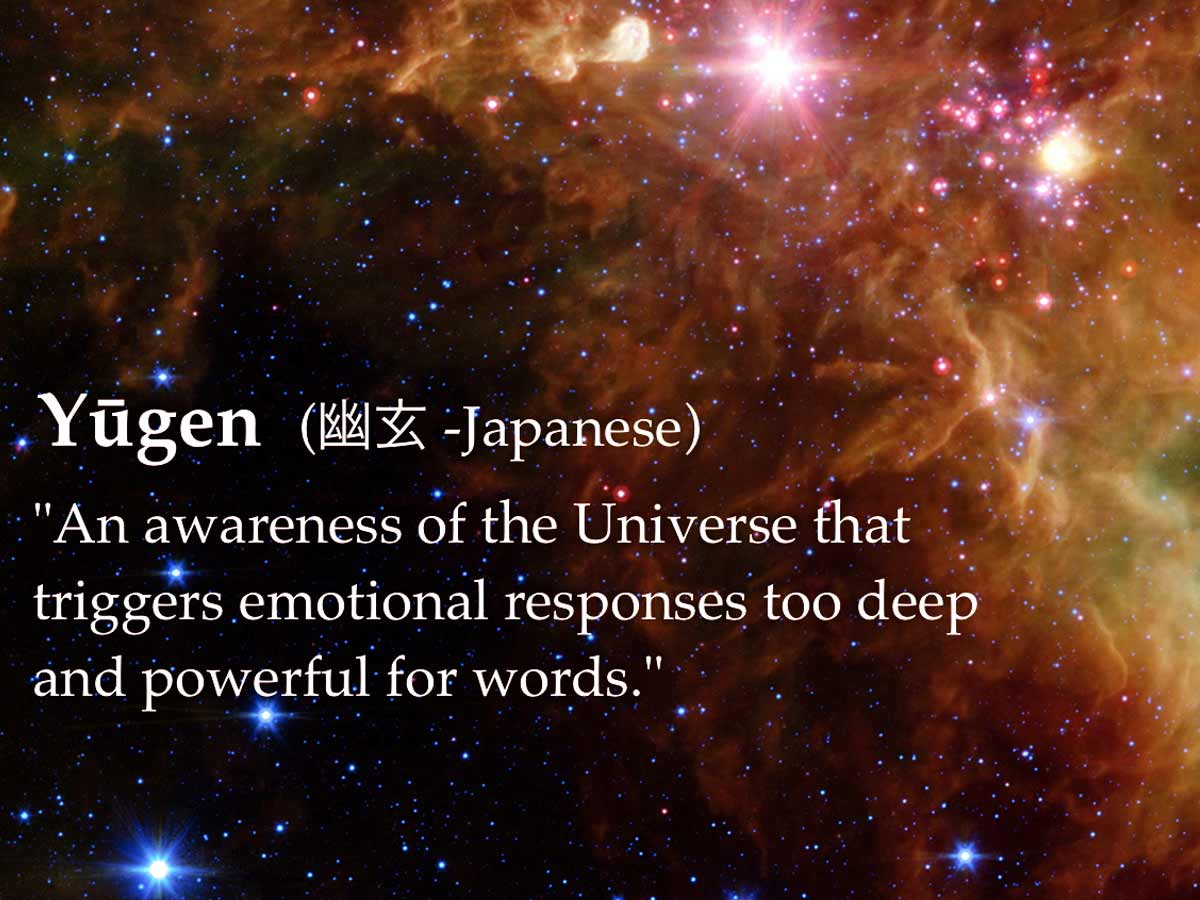 An awareness of the Universe that elicits emotional responses that are too deep and powerful to put into words.

“Yugen Concept” is a fundamental notion that impacts many Japanese arts, including literature, painting, performing arts, and architecture. The term originated in China and was employed in Chinese schools of thought such as Buddhism, Laozi, and Zhuangzi. The prominent Japanese poet, Fujiwara no Toshinari, then began utilizing the phrase, Yugen Concept, in his criticisms of Waka poetry from the late Heian period to the early Kamakura period.

Over time, it became a key term in Waka poetry treatises. It eventually influenced other Japanese arts such as Noh Drama, Zen, Renga (connected verse), Sad (tea ceremonial), and Haiku during the medieval period (a type of amusing and playful Waka).
It was eventually used as a common term in Japanese culture.

The word Yugen Concept is commonly translated as “mysterious profundity.” Yugen Concept refers to the beauty that we can perceive in an object, even though the beauty does not exist in the literal sense of the word and cannot be seen literally. Yugen Concept is a sense that allows us to imagine the latent beauty of an object rather than simply enjoying its surface beauty. For example, when we see a flower, we think it is lovely.

This is the beauty of the surface. The flower has withstood wind, rain, and snow in the past and will eventually wither, no matter how beautiful it is now. Although the beauty of the flower itself is remarkable, the beauty will be more impressive than the superficial beauty when we envision its past and destiny.

You can better grasp Yugen Concept if you think of it as a hint, lingering recollection, aftertaste, or inference. Because imagination is crucial for feeling Yugen Concept, many artists in Japan have developed a method to urge their viewers to use their imaginations since ancient times. Unpainted blank space, simplification, asymmetry, irregularity, imperfection, calm colors, composition, gold paint – are some ways artists in the Japanese-style painting world invite their viewers to participate creatively in the viewing.

Japanese Buddhism has had the greatest influence on Japanese aesthetic ideals. Everything in the Buddhist tradition is either developing from or fading into nothingness. This “nothingness” is not a vacuum, and it is more of a potentiality space.

If the seas represent possibility, everything is like a wave that emerges and returns to it. There are no continuous waves, and there are no such things as ideal waves. Even at its crest, a wave is never complete. Nature is regarded as a dynamic whole worthy of admiration and appreciation.

This love of nature has been central to many Japanese aesthetic ideals, “arts,” and cultural components. The concept of “art” (or its conceptual counterpart) differs significantly from Western traditions.

Japanese aesthetics is a collection of traditional concepts such as “Wabi” (transient and stark beauty), “Sabi” (natural aging beauty), and “Yugen Concept.” These and other principles serve as the foundation for much of Japanese cultural and aesthetic conventions. Thus, while aesthetics is seen as a philosophy in Western nations, it is regarded as an inherent element of daily living in Japan.

Wabi and Sabi are terms that relate to a thoughtful approach to daily life. Their meanings merged and merged through time until they were fused into wabi-sabi, the aesthetic characterized as the beauty of objects that are “imperfect, ephemeral, and unfinished.”
Things in blossom, or decay, as it were, are more evocative of wabi-sabi than full bloom because they represent the transience of things. When things arrive and depart, they leave indications of their presence or absence, and these signs are seen as lovely.

Beauty, in this context, is an altered state of awareness that can be found in the everyday and simple. Nature’s signatures can be so subtle that they require a calm mind and a trained sight.

Also Read, Kintsugi: The Beautiful Art of Healing your Soul

These elements can be found in nature, but they can also represent human character virtues and acceptable behavior. This implies that morality can be imparted via enjoyment of, and participation in, the arts. As a result, aesthetic values have an ethical connotation and are prevalent in Japanese society.”