Home Arts & Entertainment Poetry The Shield of Achilles: A Deep Analysis you Must Read… 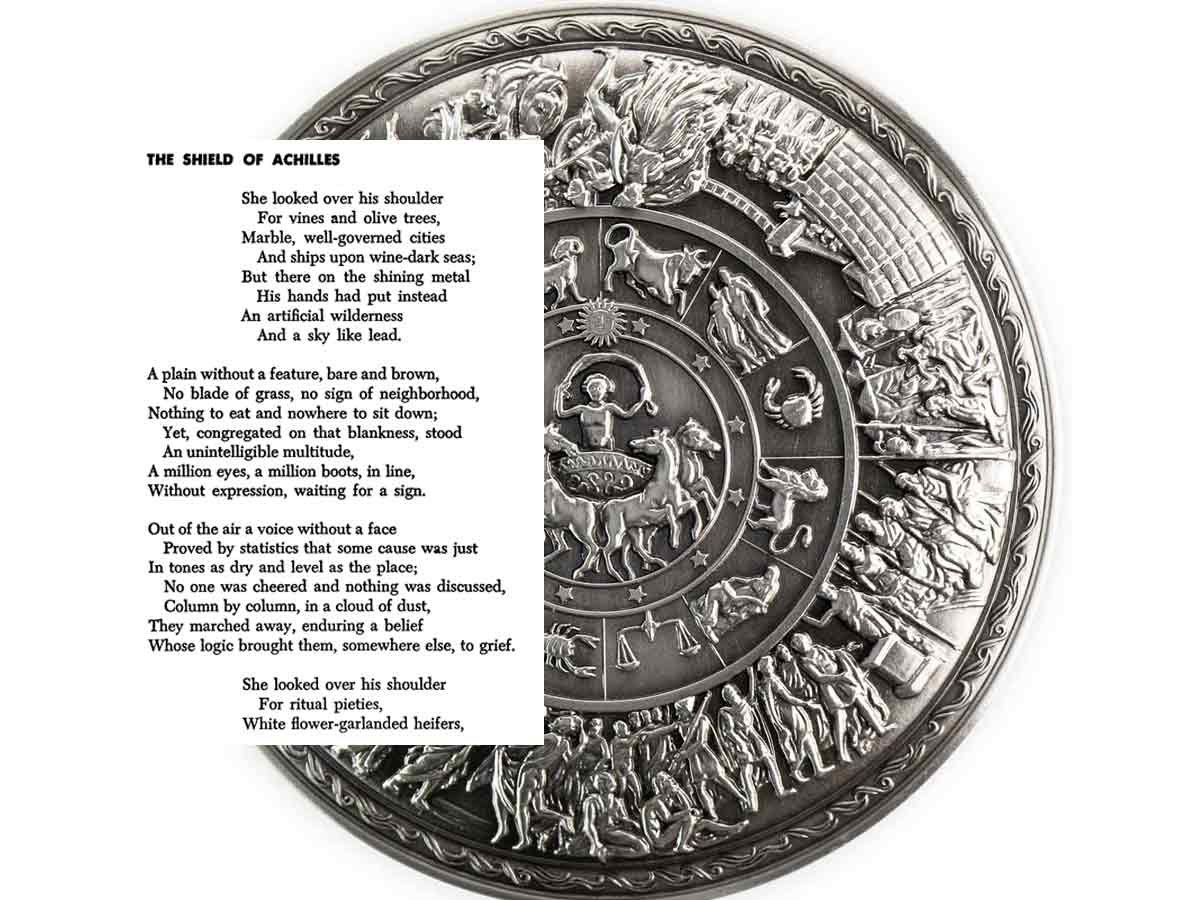 W. H. Auden produced The Shield of Achilles in 1955, in which he renders the Homeric topic in a mock-heroic manner, with alterations. In Greek mythology, Thetis, Achilles’ mother, peers over her son’s shoulder at the shield. W. H. Auden’s ‘The Shield of Achilles’ innovatively depicts an episode from Homer’s epic poem “Iliad.” This poem combines the ancient and modern worlds in order to show the futility of the latter.

In his poem ‘The Shield of Achilles,’ W. H. Auden creates an imaginative account of what Thetis observed on her son’s shield. Thetis, according to Greek mythology, was a sea-goddess. She was Achilles’ mother, the greatest of the Greek heroes in the Trojan War. Hephaestus, the god-maker of armor, created armor and a shield for Achilles at her request. On the shield, he also etched pictures. In this poem, Shield of Achilles, the poet discusses the pictures or scenes painted on the shield by Hephaestus’ deft hands.

During the Trojan War, Hephaestus, the Greek god’s blacksmith, created the shield for Achilles. She had expected to see olive groves and vines, marble towns, and ships on stormy seas etched on the shields, but Hephaestus has changed it. Under a leaden sky, he created “an artificial wildness.” The plain is depicted as barren and brown, yet an enormous mass of boots stands ready for battle.

There are depictions of the artificial and desolate existence of the modern wasteland, with no food or shelter. This is the contemporary wasteland, full with puppets that cannot think for themselves and blindly obey their leaders and overlords. They are all hollow on the inside. The radio announcer speaks in an impersonal tone, presenting data that their cause is legitimate for the conflict and therefore persuading people to go to war.

Thetis wished to view the religious motifs etched on her son’s shield, but barbed wire encloses a military camp in “an arbitrary site,” and bystanders watch from a distance while some pale-faced captives are punished. Before their bodies perished, the inmates died. The crucifixion of Christ was required for humanity’s regeneration and redemption. However, the slaughter of innocent people in the name of war or any other form of violence is meaningless. These indiscriminate killings are manifestations of the modern people’s spiritual degradation.

In the third verse, Thetis searches for people dancing and listening to music, but instead discovers sculptures of spreading weeds, a poor child alone throwing stones at birds, a girl being raped, and boys killing one other. The children have never known love or peace, let alone human pity. At the end of the poem, Thetis tears in despair because modern existence is depicted as violent and beastly.

“The Shield of Achilles,” Themes

The subject of war is presented by the merciless troops and the “unintelligible mass” standing aimlessly on a desolate terrain. Following that, Achilles’ shield became a symbol of heroism. Shield of Achilles, however, is neither a celebration of valor or any heroic deed. It is rather about the hollowness of heroism.

The Atrocities of War

The Shield of Achilles is based on a passage from The Iliad in which the goddess Thetis requests new armor for her son, the famed Greek warrior Achilles, from Hephaestos, the god of blacksmiths and crafters. In the ancient narrative, Hephaestos forges Achilles a magnificently complex shield that juxtaposes themes of warfare with depictions of ordinary life and the natural environment, implying that conflict is noble and glorious.

Auden’s narrative presents a totally different perspective on conflict. Thetis expects such gorgeous artwork to decorate the shield, but sees a desolate countryside destroyed by battle (specifically, the Shield of Achilles implies, by World War II). Rather than celebrating war, the Shield of Achilles focuses on the devastation and suffering that it always leaves in its wake.

Initially, Thetis seeks the beautiful countryside described on the shield in The Iliad—images of “vines and olive trees,” an orderly city, and the untamed ocean. She then looks for sports persons competing, dancers “moving… to music,” and religious folks taking part in rites and celebrations. In summary, she expects conflict images to exist alongside depictions of “well-governed cities”—a moral civilization whose preservation and growth justify war.

These descriptions of a desolate environment are mixed with evidence of personal suffering, shattering any romantic ideals of wartime valor even more. For example, soldiers who go out to battle eventually suffer “grief” because of their instructions. They’re also not swayed by passion or moral conviction, but by dry “numbers” supplied by some distant commander, making their suffering and death more harsh and arbitrary.

Also Read, The Raven by Edgar Allen Poe: The Beauty of Death

Although it allegedly addresses a historical fight, the Shield of Achilles has several allusions to twentieth-century warfare, notably World War II events. The figures who perpetrate and witness violence in these scenarios are profoundly apathetic—that is, they don’t appear to care about or respond to the atrocities before them. The speaker compares this apathy with the purpose and emotion that pervades The Iliad’s depiction of battle. In saying so, the speaker implies that the gradual acceptance of war as a part of life leads to complicity in violence.

The shield’s image of modern warfare is characterized by a collective acceptance of violence. For example, the second verse mentions “a million eyes, a million boots”—the quantity of troops implying an allusion to a world war—and so reduces individuals to their components; the soldiers are perceived as “an unfathomable crowd” rather than as individual human beings. Their lives are undervalued, and they become cogs in a bigger war machine, which is subsequently contrasted with Thetis’ mental turmoil over the possibility of losing her son.

Bystanders are likewise profoundly disappointed. A group of people that stand by and watch while three individuals are tortured “never moved nor talked” and are deemed “ordinary good persons.” These bystanders feel no duty to interfere, and their inactivity, tellingly, has no bearing on their position as sensible, acceptable members of society. In this sense, the Shield of Achilles links modern battles and military equipment with a growing indifference to the suffering of others. This apathy originates from the “every day” nature of modern violence—it is so prevalent that human misery is accepted as an unavoidable feature of existence.

Achilles’ shield is an exquisite work of art in The Iliad that presents conflict as an essential aspect of a good civilization. It’s a decoration and a tool, and the detailed artwork is lovely. Shield of Achilles imagines what the shield might look like if its aesthetic considerations were removed, revealing frank pictures of war’s genuine consequences. The speaker compares the original shield’s magnificent aspirations of battle with war’s terrible reality in order to call into question the legitimacy of art that takes war as its topic. The poem appears to question whether any work focused on aesthetics, with being beautiful, can properly convey the truth of something as heinous as war.

The intricate, romanticized depictions of wartime life that cover the original shield convey a romantic vision of combat. Hephaestus, for example, is expected to construct “ships upon untamed oceans” and “athletes at their games,” according to Thetis. These pictures of courage and adventure, which appear alongside scenes of combat, depict battle as a valorous and thrilling event. The towns that the troops guard are “marble” and “well-governed.” Such dignified adjectives elevate their duty.

Naturalistic beauty abounds in the original shield, with lush flora, “white flower-garlanded cows,” and dancers “dancing their beautiful limbs.” This aesthetically appealing and beautiful backdrop for violence subtly promotes conflict as an essential component of a utopian society. Throughout Shield of Achilles, the speaker vividly recounts the captivating picture that covers the original shield. By doing so, the speaker conveys to the audience that the shield celebrates combat by appealing to their aesthetic senses.

The speaker’s contemporary version of the shield is marked by austerity and desolation. The environment on the shield is desolate and “devoid of feature.” In fact, the speaker mentions everything that isn’t on the shield: “no blade of grass, no trace of neighborhood, / Nothing to eat and nowhere to sit down.” When structures exist, they are no less foreboding—concentration camps encircled by barbed wire.

‘The Shield of Achilles,’ a poem by W. H. Auden, has a reference to Homer’s epic poem “Iliad.” The poet refers to Hephaestus’ shield-making in this verse. Thetis peered over his shoulder as he worked on it. Aside from that, “untamed waters” is a metaphor used by the poet. The poet compares the sea like a wild beast in this passage.

The phrase “shining metal” contains synecdoche. Following that, in the last line of the first stanza, there is a usage of simile. This stanza includes not only the methods discussed above but also the use of alliteration in the line “His hands had.” The poet repeats the term “million” in the second verse. Palilogy is the term for this recurrence.

The poet employs sarcasm in the third verse with the phrase, “Proved by statistics that some reason was just.” Similarly, there are various sarcastic remarks in The Shield of Achilles. The word “flickering forge-light” has a ring of truth about it. Then, in the line “That conveys weight and always weighs the same,” Auden delivers an epigram. The statement “And died as men before their bodies perished” contains a contradiction. Similarly, the sentence “That females are raped, and two lads knife a third” is contradictory. “Iron-hearted” features metonymy in the final stanza.

Two Key Symbols of the Shield of Achilles

The Shield of Achilles, as shown in Homer’s Iliad, is not physically present in this poem. It looms, though, as a symbolic counterpoint to the speaker’s contemporary depiction of the shield.

Thetis characterizes Homer’s shield as “packed with imagery of adventure, natural beauty, and a devout, ordered society.” These romanticized depictions of ordinary life are interwoven with depictions of heroic conflicts. As a result, the original shield comes to represent old beliefs in battle, namely that violence is a vital aspect of a respectable society.

This shield, however, is no longer there and has been replaced by a contemporary one that clearly depicts the heinous consequences of war. The original shield, in this context, also reflects the risk of glorifying conflict, particularly in works of art. Despite its magnificence, the shield cannot rescue Achilles from death.

In contrast to Homer’s original, the contemporary Shield of Achilles depicts lifeless landscapes, apathetic spectators, and unmotivated bloodshed. Its depiction of war is centered on death and moral decay. The current version of Homer’s original shield, which reflects the (perceived) role of battle in classical Greece, represents the dismal reality of war. The contemporary shield has the trademarks of twentieth-century warfare—”barbed wire,” “statistics,” and “a million boots.” As a result, it emphasizes the horrors of modern combat in particular.

WH Auden in Shield of Achilles used myth as a symbolic metaphor by concretizing and universalizing it. It is unlike history because it is not factual, but it is like history because it is explanatory; and it is unlike the novel because it is not mimetic, but it is like the novel because it is created. These features may be found here. Auden can depict one of the direct forms of ‘the riddle of being’: the difference between conceptions of harmony and compassionate society and acts of mass manipulation, moral blindness, and militarism. He can distill known realities into a timeless metaphor of themselves.