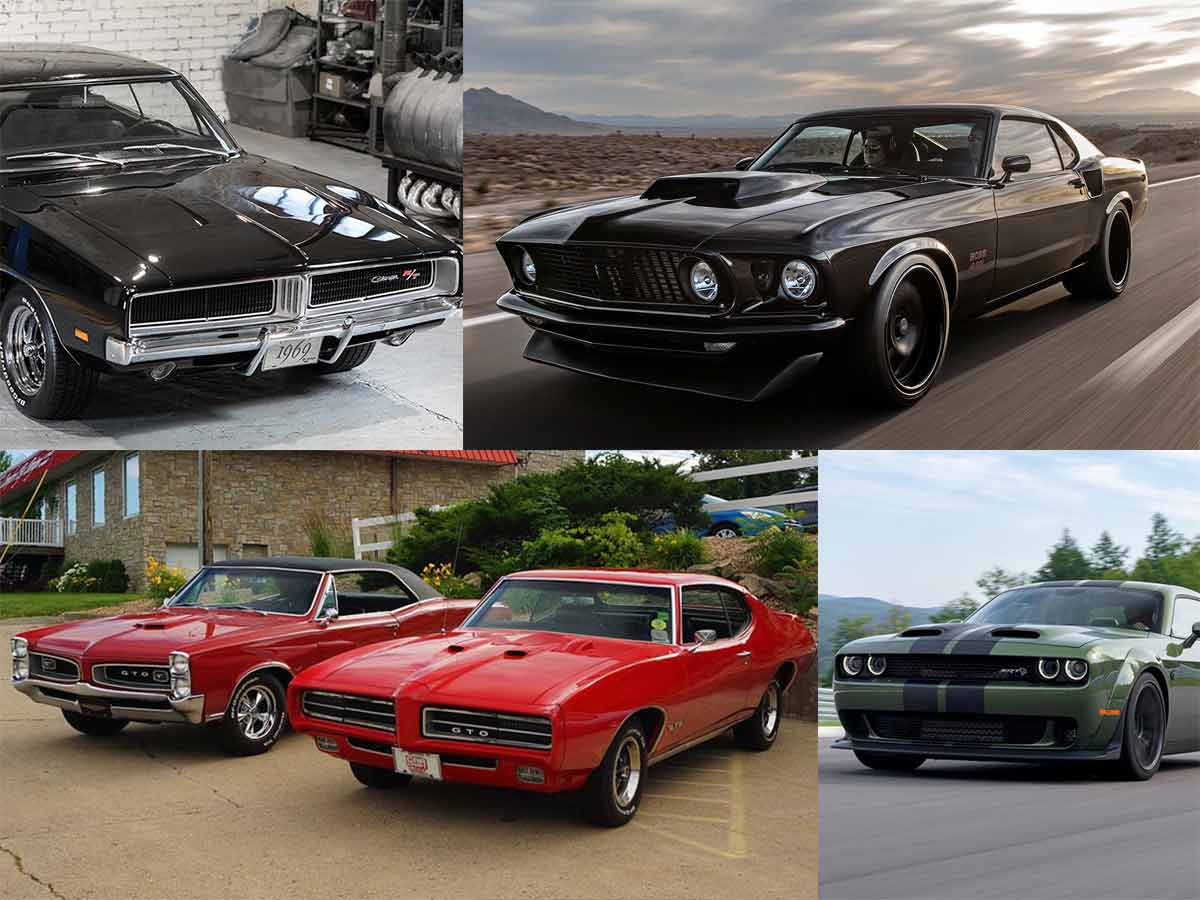 The 1960s and 1970s were perhaps the pinnacles of American automotive manufacture, with a bevy of US-based marques launching a slew of what were then seen as highly attractive, macho, and high-performance vehicles. Of course, we’re referring to the legendary muscle car. Even though these famous machines have been out of production for over half a century, these rolling icons of Americana are still highly valued and sought after by car enthusiasts and collectors.

While nearly every American muscle car from this era radiates a brawny, aggressive, and purpose-built look, there are a few cars that stand out as true masterpieces. Many of these models were available with higher-spec enhanced performance packages and certain aesthetic packages that added to their already high-performance characteristics. We’ll look at 15 of the best American muscle cars ever made in the gallery below.

What Is the Definition of a Muscle Car?

In a nutshell, the notion of a muscle car is primarily derived from a hot rod and drag racing culture. The fundamental theory is to take a tiny, relatively lightweight car, cram in a larger engine, and strengthen it with improved brakes and suspension. These mean-looking cars are nearly always two-doors, with a bare minimum of comforts, are generally powered by V8 engines in the 400-425ci (6.0-7.0L) range, and are, by definition, performance-oriented.

Brock Yates, an automotive writer, invented the phrase “the muscle car” in 1964 when seeking to characterize the character of that year’s Pontiac GTO for Car and Driver Magazine. Despite this, the 1949 Oldsmobile Rocket 88 is commonly regarded as the first-ever American muscle car and the first domino to fall in what became a cultural phenomenon in the automobile industry. Not only did domestic sales skyrocket, but the advent of the muscle car piqued the curiosity of international markets in US-made vehicles, prompting several of the world’s major automakers to commission their designers to create muscle cars of their own. Like, the De Tomaso Mangusta and Aston Martin V8 Vantage.

So, we bring you the fastest, rarest, and the best Muscle Cars of All-time… 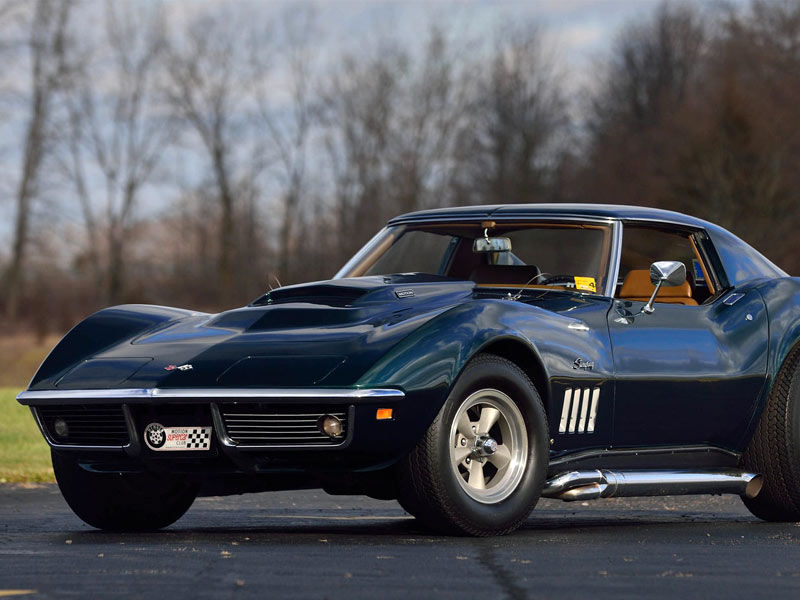 These ultra-elite Corvettes were created for a brief period between 1969 and 1971, thanks to a collaboration between Long Island auto dealer Baldwin Chevrolet and Motion Performance, before the US Justice Department stopped the activity. These distinguished specimens — only 10 were constructed — were individually customized to the customer’s specifications. Still, they had Edelbrock intake manifolds, Holley carbs, recessed lighting, a ram-air hood, flared fenders, slit taillights, unique wheels, and considerably wider tires, among other minor changes.

The sensuously designed Phase III GT was a sight to see. It had a distinctive fastback rear window, a performance suspension, and up to 600 dyno-tuned horsepower from a 427 cid or 454 cid big-block V8. Despite this, one Motion Vette had a smaller LT1-spec 350 cid V8.

Also Read, 5 Most Expensive Supercars In The World 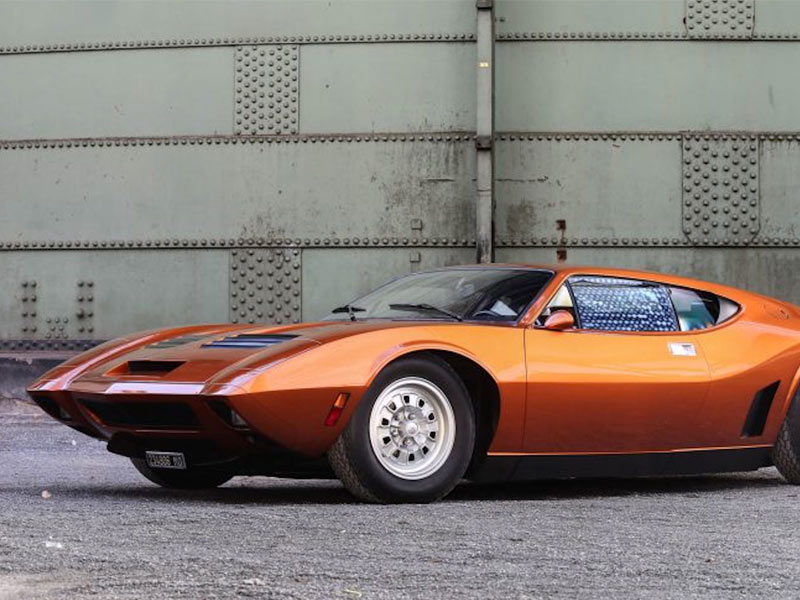 The AMC AMX/3, probably the oddest muscle car on this list, was an American-designed, Italian-manufactured prototype. This sleek muscular American supercar, first shown at the 1970 Chicago Auto Show, was clearly inspired by the exotic Italian automotive options of the day.

Despite being planned for a limited manufacturing run of 1,000 devices, government safety requirements in the United States would eventually lead to the project’s cancellation after just five proto-specimens were created. The 3,300-pound sports vehicle was powered by an AMC 390 cid V8 with 340 horsepower and a four-speed manual transmission. It allegedly has a peak speed of 170 mph. It can accelerate to 60 mph in a little over 5 seconds—excellent figures for the period. 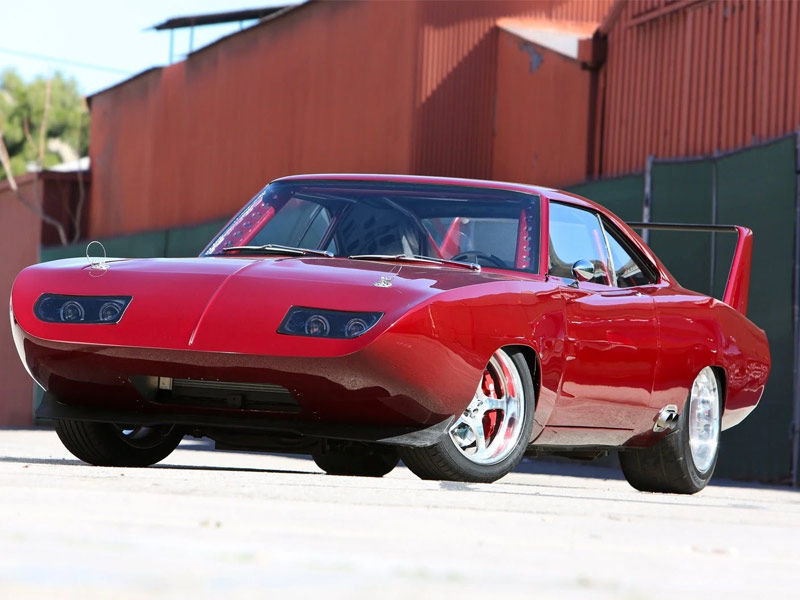 After a disappointing race season with a 1968 Charger 500, Dodge returned in 1969 with the new and better Charger Daytona. This high-performance vehicle, named after the historic Florida race circuit, had an exceptionally distinctive bodywork with a pointed nose and a huge rear wing. Although manufacturing was halted after the 1977 model year, the popularity and notoriety of this iconic vehicle prompted Dodge to reintroduce a new version of the Daytona in 2006.

Engineers brought the Charger to the wind tunnel to enhance peak speed. A roughly 2-foot-tall rear wing, a flat back window, and a larger, sloping nose cone were among the aerodynamic changes made to the huge Dodge. The outcomes were remarkable. The race version of the Daytona was the first Nascar vehicle to surpass 200 mph. Following many Dodge victories in 1969 and others by Plymouth in 1970, Nascar’s new rule book prohibited the use of these vehicles. The production vehicles, either with a 440 big-block or the renowned 426 Hemi, are now highly sought-after collector cars, fetching more than $150,000 at auction. 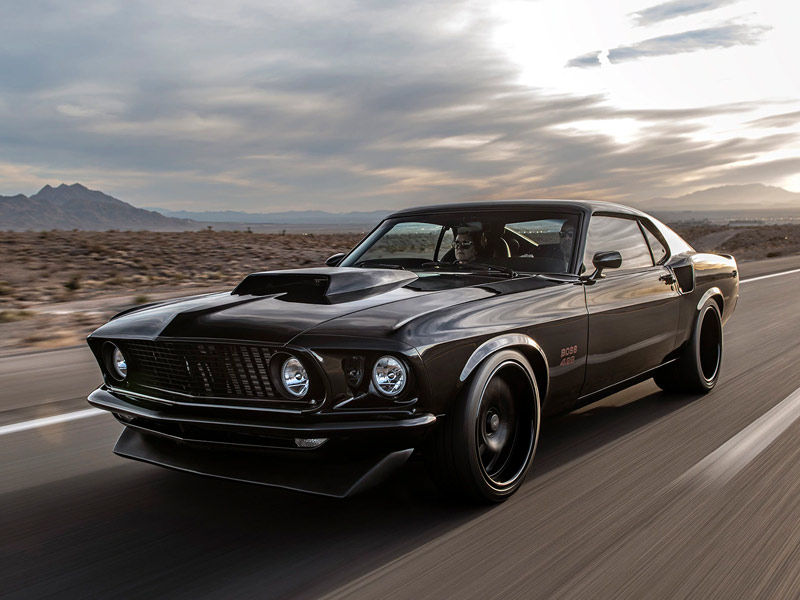 Nascar was at its peak in the late 1960s and early 1970s. Automakers took stock-car racing seriously, designing engines and bodies for racing that were frequently too crazy for the street. All the automakers needed to do was sell 500 of these crazy vehicles to race them in Nascar.

The Boss 429 Mustang was an absolute beast. Although the Mustang did not compete in Nascar, the 375-horsepower 429-cubic-inch V-8 under the hood was developed for racing and could reach 6000 rpm. The issue was that this motor did not function properly on the road. It was slower than the other big-block Mustangs on the market at the time. 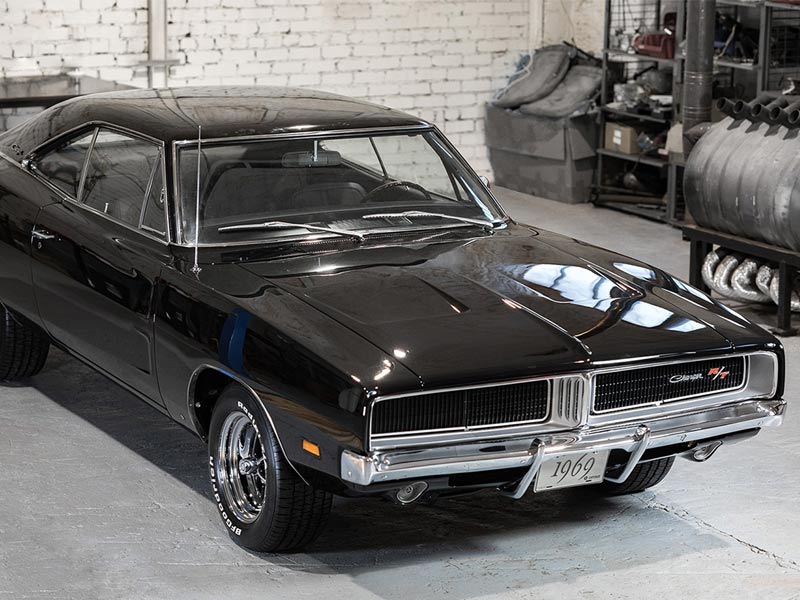 The initial year of the second-generation Charger was a hefty sedan weighing over 4,400 pounds. However, in these 0-to-60-second test runs, the Hemi reigns supreme. This combination would cover the quarter-mile track in 13.5 seconds at 105 mph. Because these engines were leaned-out for smog purposes, the carburetors may have been tweaked a little.

Given all of these options, it’s somewhat odd that the automobile was only available in one body type, a two-door hardtop. The 1969 Dodge Charger was an upgrade of the fully restyled ’68 model. Thus it had a 117-inch wheelbase with Chrysler’s famous torsion-bar suspension up front and leaf springs in the back. A vertical center divider in the grille and horizontal taillights were new elements for basic and R/T Chargers. 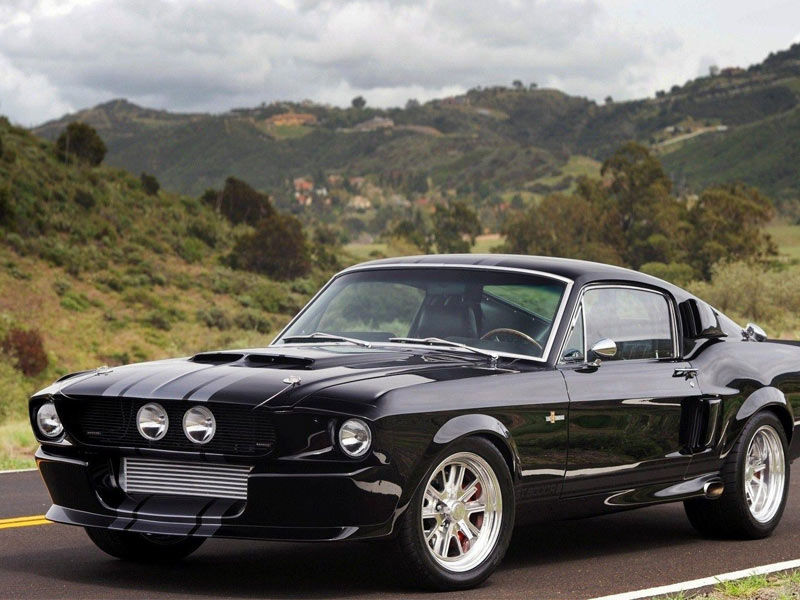 Many Mustang enthusiasts consider the first two years of Carroll Shelby’s Mustangs to be the most desired. Those 1965 and 1966 GT 350s were light, simple, and ideal for track use. However, the later 1967 and 1968 vehicles provided more excitement under the hood. They were the machines of choice for winning drag races.

For the first time, 355-hp 428-cubic-inch big-block engine was available in GT 500 Shelbys from 1967 through 1968. Quarter-mile times for the day’s car testers were in the mid-to-low 14-second range—quick for the day.

The Shelby Mustangs gained bigger scoops and a flashier appearance to complement the increased power and torque than previous models. In 1968, the even faster KR (King of the Road) high-performance variant was also offered. 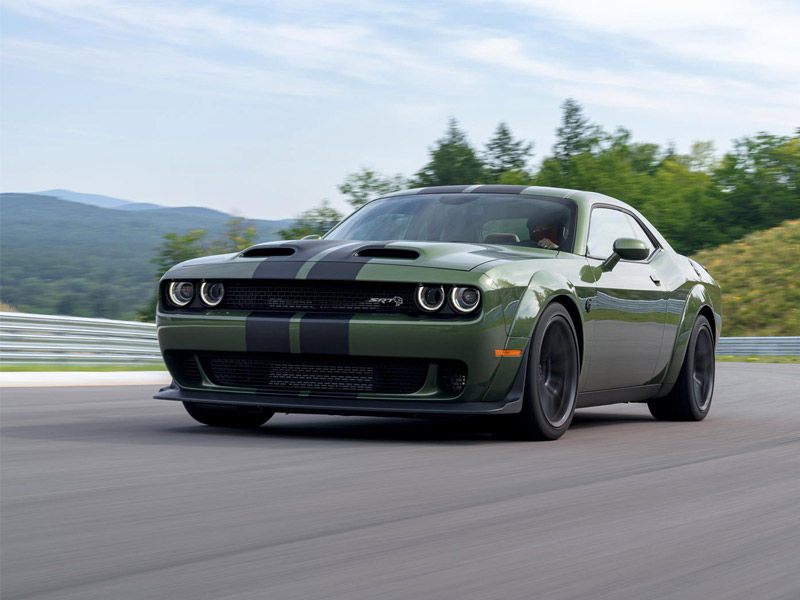 This beast is Dodge’s most powerful Challenger. Dodge debuted the Challenger in 1969, with the Hellcat arriving considerably later in 2015. The standard 2020 model (seen) will set you back around $70,000, to begin with.

The Redeye has a strong punch and can run a quarter-mile in 10.8 seconds. And when we say powerful, we really mean it. The Redeye weighs a staggering 4,514 pounds, but due to a 797 horsepower engine, it can still haul ass. What’s the best part? You get the stunning appearance of a vintage automobile with the modern conveniences and features we all know and appreciate. 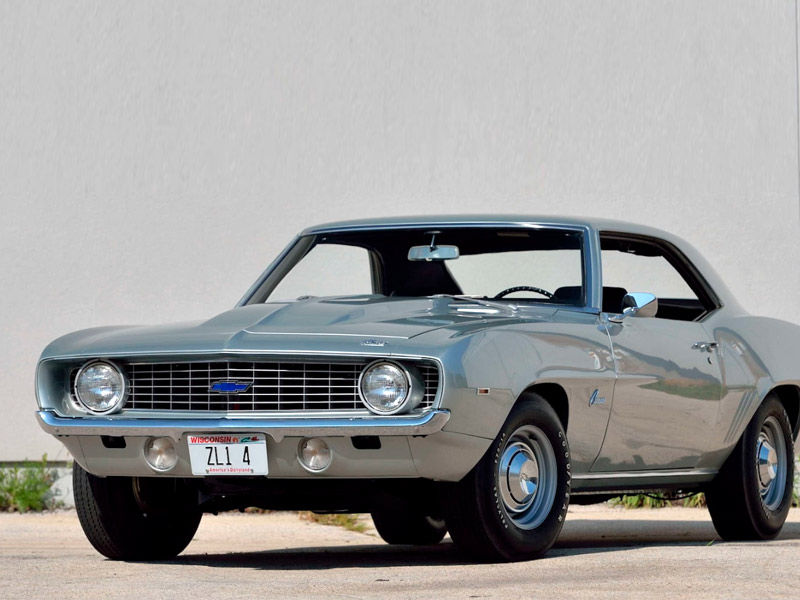 The ZL1 you’ll find on dealer lots today was inspired by this 1969 beauty. Still, the predecessor unquestionably outsells the current model in terms of popularity. Only 70 famous cars were ever manufactured, and BankRate calls the original Chevy Camaro ZL1 the “rarest production automobile Chevrolet ever made.” This resulted in a respectable $7,200 price tag on the secondhand market. However, we believe an owner would want more, especially if the car is in good shape.

The muscle car had the most powerful engine in the brand’s history, capable of producing 430 horsepower. The engine was really inspired by the company’s renowned 427 V8 unit from back in the day. The revised design resulted in one of the most beloved systems of all time! 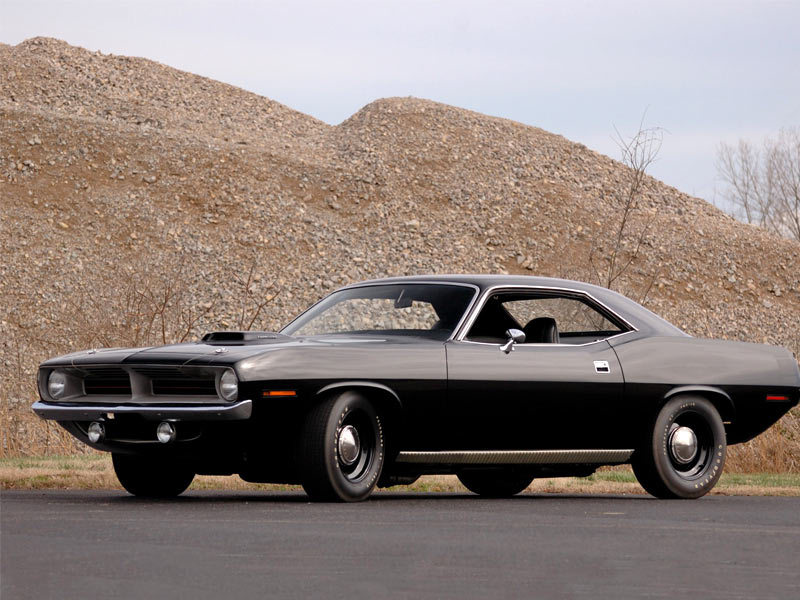 While the Plymouth Barracuda couldn’t compete with the Ford Mustang in terms of sales and popularity, it was a strong challenger at the time and is now a great classic. The muscle car that overshadowed the Barracuda was its more powerful sister, the Hemi’ Cuda.

The Plymouth Barracuda, which was produced from 1964 to 1974, is unquestionably one of the most renowned muscle vehicles in history. The vehicle had a significant makeover and was redesigned in 1970, resulting in its most popular (and most appealing) body shape. With up to 425 horsepower on tap, these Hemi-powered beasts proved popular with club racers in the car’s home market of the United States and abroad.

In 1970, Plymouth took a redesigned Barracuda. It installed the King-Kong engine, the 7.0-liter Hemi V8, giving the Hemi’ Cuda 425 horsepower, beating away the rivals in the horsepower wars. Racers were given a new ride all of a sudden. 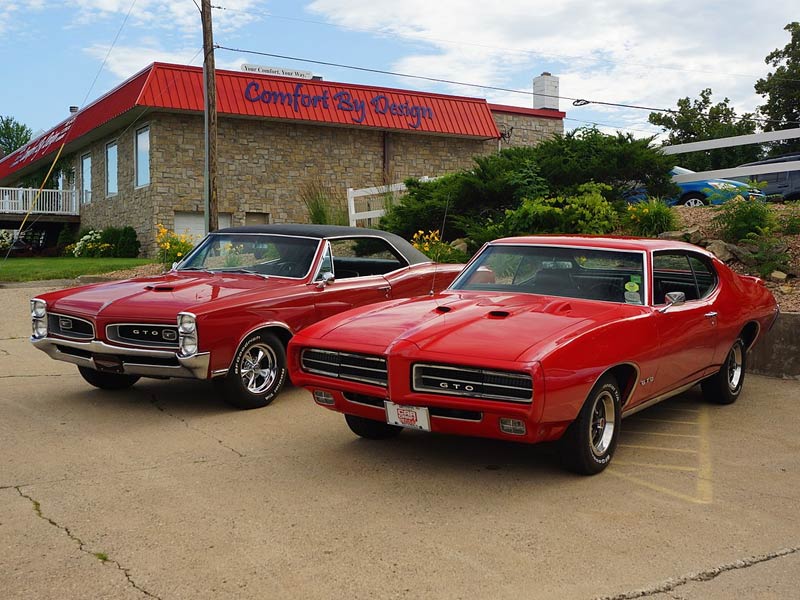 The GTO Judge was Pontiac’s answer to the Plymouth Road Runner, with a Ram Air IV engine, Rally II wheels, a Hurst shifter, beefier tires, and a ram-air hood. While its strong performance and affordable price point made it popular with car enthusiasts, Pontiac believed that the canary orange livery and factory “The Judge” badges would help it stand out from the competition.

While many auto enthusiasts would argue that the 1949 Oldsmobile Rocket 88 was the first muscle car on the market, many would say that the 1964 GTO was the moniker that helped make the class of vehicles so popular. Because of the revolutionary 389-cubic-inch V8 engine, the ride influenced many future muscle cars.

When GM outlawed all factory-sponsored racing, Pontiac’s best minds, including John DeLorean, decided to build the Pontiac GTO. The name, of course, irritated Ferrari because it was based on the Ferrato GTO, which stood for “Gran Turismo Omologato.”

However, on Pontiac, the GTO stood for “Grand Tempest Option” since the automobile was based on the Pontiac Tempest. With tri-power carburetion, the 6.4-liter V8 produced 325 horsepower and could take up to 348 horses. Needless to say, this vehicle became legendary.