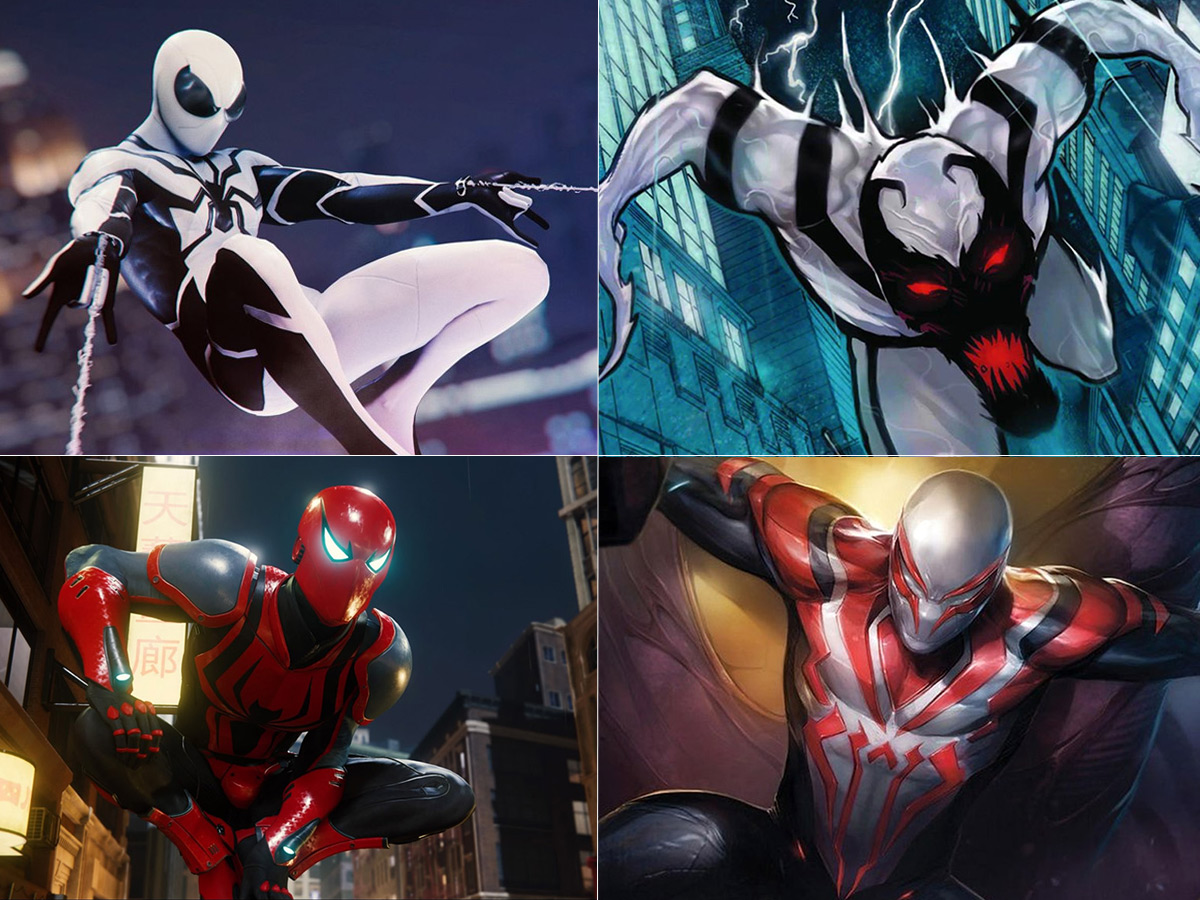 Spider-Man, alias Peter Parker, is the most well-known Marvel character of all time. His spider-powers not only offer him wall-crawling skills, but they also boost his brain. It enabled him to construct several Most Powerful Spider Man suits throughout the years.

For almost fifty years, he has been Superior, Spectacular, Sensational, and Amazing, and he has gone through quite the wardrobe metamorphosis. We’ll be looking at the 10 coolest Spider Man suits to commemorate the Wall-enormous Crawler’s array of costumes over the years. The choices we have will be based on their first appearances, which will be noted with each entry, although some have their own versions in various forms of media. While the other versions will be described briefly, the initial appearances will take the top position on our list.

Spider-Man is one of the most recognizable comic characters of all time, and there have been many fantastic outfits worn by different incarnations of the hero throughout the years.

Spider-Man has gone through many various threads throughout the years, and some of them differ from the iconic red and blue costume that fans are familiar with. Some of his many outfits gave him particular abilities, while others were just a method to change his appearance for a new audience and a new period.

Regardless of aim, there are several Spider Man suits that stand head and shoulders above the others as some of the greatest, not only for the character, but for all comic characters.

For the Spider-Man mythology, Marvel stepped up their game by time-traveling into the future and inventing a completely new wall crawler in the shape of Miguel O’Hara. He got his abilities after taking the drug rapture, which forced him to heal himself via a genetic surgery that mistakenly fused his DNA with that of a spider.

O’Hara wanted a proper Spider Man Suit to match with his newfound skills. It’s one of the coolest ever made, with a reversal of Peter Parker’s primary red/blue theme and a cape that resembles webbing, allowing him to glide. Over time, the suit would be improved with enhanced durability, sensors, wings, jets, and holographic projects.

There are hundreds of Spider-Mans in each parallel reality, each with their own Spider Man Suit. And one of them is Spider-Man 2099. The fascinating part is that he possessed telepathy, which he used to converse with others. The scientific reason for it has yet to be discovered, although it is due to increased spider-sense, which mutated very differently. His given skills and abilities were always there to support him. Miguel is the strongest Spider-Man ever known, with abilities such as superior reflexes and healing factor.

The second Spider-Man 2099 is Miguel O’Hara’s son Gabri, whom Miguel named after his late brother Gabriel. Gabri serves as the next Spider-Man, succeeding his father, alongside Captain America 2099 and his mother Honey Bee. Gabri wears a Spider Man Suit identical to Miguel’s original “Death’s Head” costume, with a few thousand minor changes.

Peter designed Miguel’s new suit using the greatest technology Parker Industries offered, which resulted in a better costume for Miguel, despite the absence of visual iconography from his old costume. The new Spider Man Suit was dubbed Miguel’s “White Suit,” and it even featured as a suit in Marvel’s Spider-Man for the PlayStation 4.

Spider-Man joined the Future Foundation at Johnny Storm’s request shortly after his death. Spidey took the honor seriously, even discarding his regular red and blue Spider Man Suit in favor of one that fitted the team’s visual style.

As a result, he created the new suit to complement the Foundation’s basic black and white color scheme, with the latter being the primary hue and black serving as an accent. It was eye-catching and well suited to the character, without detracting from what made Spider-Man such an instantly identifiable icon.

Mr. Fantastic’s Future Foundation Spider Man Suit never gets filthy, since it is constructed of unstable molecules. There would be no problem if Sandman used the Sand power to strike. It’s also a long-lasting one. The suit may revert to its original Red-Blue color scheme whenever Peter desires.

Spider-Man could hold his own with his basic conventional Spider Man Suit, but he required something more capable. Enter Horizon Labs’ MK III suit, which should resist off attacks from many supervillains which were no easy accomplishment.

Spider-Man hearing acuity technology based on Daredevil’s physiology was included in the suit, as well as a cyber-control helmet capable of manipulating surrounding devices. It could fly, endure a direct blow from the Rhino, and resist Electro’s shock bolts, among other incredible powers.

The ‘End of the Earth’ suit, commonly known as Spider-Armor MK III, contains several fighting capabilities to combat Sinister Six at the same time. To summarize, it’s an Iron Spider 2.0 with no Spider legs. The Spider-Armor III suit has no restrictions. But, honestly, if Peter Parker wore this Spider Man Suit, it would be quite tough for his adversaries to beat the neighborhood web-slinger. In Amazing Spider-Man #682, Peter Parker designed this costume as a trump card against the Sinister Six’s invasion on the city.

This set of armor was created especially for Peter Parker when he sided with Tony Stark during the dark and frightening Civil War narrative. It was used in clashes against other superheroes, making it one of the most divisive outfits in the superhero’s entire career.

It’s also one of the most recognizable for the same reason. The Iron Spider suit, which was painted in a red and yellow color scheme similar to Iron Man’s armor, provided Parker with a slew of unique tech enhancements, including a set of artificial spider legs that could perform a variety of defensive and offensive duties.

We won’t be looking at the Iron Spider version shown in Avengers: Infinity War, but the classic red and gold from the comics. During the Civil War narrative, Tony Stark constructed the Iron Spider costume for Peter Parker as a method for Spider-Man to show he had sided with Iron Man rather than Captain America. Armed with three more mechanical limbs that aid in combat or navigating across New York City.

During the 1980s, while the Secret Wars narrative was in full swing, both Spider-Man and the Marvel Universe were flipped on their heads. He discovered the suit on the Battleworld, assuming it to be nothing more than sophisticated technology fashioned into a suit that would offer him enhanced abilities.

He returned to Earth and maintained the suit, which he subsequently discovered was an aggressive extraterrestrial symbiote that connected physiologically and psychologically with its host. He soon rejected the creature and returned to his original costume, allowing the symbiote to join with Peter Parker’s adversary Eddie Brock, transforming him into the supervillain (and subsequently anti-hero) Venom.

It’s not the only color; the alien Symbiote boosted Peter’s skills, taking the host’s abilities to a whole new level. The extraterrestrial Symbiote originally appeared in Marvel comics in Amazing Spider-Man #252, where Peter embraced Symbiote for the first time and battled for good. Aside from that, the suit allows the wearer to imitate clothes (it would be simpler to convert him into a Symbiote suit in public locations), breathe underwater, and exist in space. Apart from the original, it’s arguably his coolest and most famous Spider Man Suit to date.

When Spider Man suit was updated with Captain Universe’s powers, he won the proverbial jackpot. Spidey developed several exceptional talents as a host to the Uni-Power, besides significant improvements to his current senses.

He could shoot energy blasts and employ telekinesis in combat, which was well beyond anything he’d seen as a New York City wall crawler. Because the Uni-Power gives onto each individual host a unique combination of talents, it gave upon Spidey the abilities it believed he need to complete his mission.

Marvel has a one-of-a-kind character who will wow you. When Peter Parker awoke from the blast, he discovered that the Omni-Power had left his body. Unfortunately, Peter lost his Captain Universe superpowers. Despite becoming one of the most powerful superheroes in the Marvel world, Peter Parker’s reign was brief.

Spider-Man was no stranger to pull off a black-themed Spider Man Suit, but the stealth suit was beyond the rest. He created it with technology taken from Tony Stark and Hank Pym, and its goal was to hide him from his enemies, thus the name.

The armor was designed particularly to counter the Hobgoblin’s sonic scream assaults, which could knock Spider-Man out. It was most notable for its ultra-sleek black material, which was stressed with flashing red lines. Kaine and Doctor Octopus would eventually wear variations of the Spider Man Suit.

Because this Spider Man Suit is composed of unstable molecules, no one can destroy it. Even if it is damaged, the suit possesses self-repair capabilities that allow it to restore itself. In summary, the Stealth Suit would be most effective when Peter Parker is confronted with enemies that have sound-related skills.

Few Spider Man suits were as powerful and competent as Tony Stark’s Fear Itself suit, which was created in collaboration with the Dwarves of Nidavellir. Uru, a metal as old as the cosmos itself, was used to make the suit, which has been employed in everything from Thor’s hammer to Odin’s spear and sword.

Spider-Man, armed with two gauntlet blades and infused with tremendous magical qualities, basically became an epic demigod with never-before-seen powers. It didn’t survive long until it was destroyed once it accomplished its function, making it one of the web slinger’s most short-lived outfits. However, it did not endure long enough.

The Fear Itself Spider Man Suit had two gauntlets with blades that could be used as combat weapons. When the Serpent, the self-proclaimed True All-Father of Asgard, terrorized Earth by instilling dread, Earth heroes defended him. To combat such a deity’s wickedness, Tony Stark created Fear Itself suits for everyone, and Peter’s is one of them.

Can you picture Otto Octavius as Spider-pleasant Man’s neighbor? Notable only for its original tale premise. Dr. Otto Octavius developed Superior Spider-Man by swapping bodies with Peter Parker. Otto is left in Peter’s body when Peter’s psyche dies in Otto’s body. Instead of continuing his criminal career, Octavius embarks on a fresh path as a hero. This Spider-Man has yet another fantastic red and black look, as well as a slew of new astounding devices and gear designed by Otto Octavius.

In Amazing Spider-Man #700, Otto Octavius’ dying brain was switched with Peter Parker’s while the original Spider-Man was stuck in the villain’s body. After Peter Parker dies, Otto Octavius takes up the mantle of “Superior Spider-Man.” Octavius enhanced the genuine spider costume to a greater level, such as by developing computerized optics and much more. When viewers see limbs on the suit’s back, Superior Spider-Man resembles Iron Spider most of the time. Otto resurrected Peter, allowing the original Spider-Man to become the true owner of one of the Most Powerful Spider Man Suits.