Home Arts & Entertainment Film The Unbearable Weight of Massive Talent: Too Much of Nicolas Cage 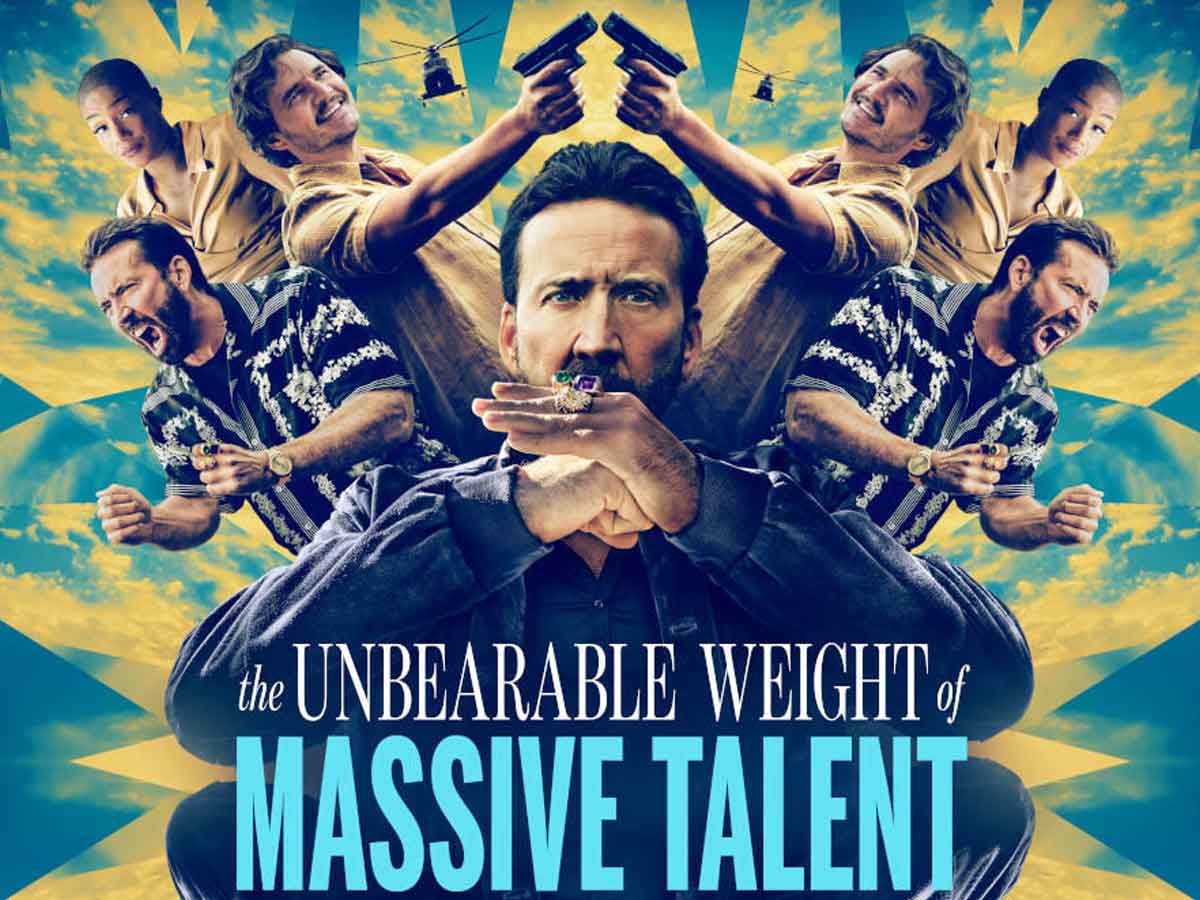 As a movie, The Unbearable Weight of Massive Talent is a Nicolas Cage meme.

Tom Gormican’s The Unbearable Weight of Massive Talent is a romp aimed at cultists who have sought out the Crazy Cage performances and forgiven the misfires in between—inventing a fictionalised version of the actor who struggles to live a human life while being goaded toward greatness by the ghost of his wild-at-heart younger self.

Perhaps this is since, while not quite nasty, this type of praise isn’t fully complimentary. Many meme cultures are becoming fascinated with something you despise, distancing art from its creators as genuine human people. And while Massive Talent may poke fun at Cage on occasion, it is primarily concerned with simply getting along with him.

Nicolas Cage is a cultural joke, but he’s also an actor famed for making great films amazing and otherwise bad films interestingly bad. The Unbearable Weight of Massive Talent, directed by Tom Gormican, falls into neither category. The film, which features a largely fictitious version of Cage, is ostensibly a self-aware parody of fans, Hollywood, and Cage’s legendary reputation. In actuality, it’s a frequently amusing but aimless action-comedy that diagnoses rather than fixes its narrative flaws.

Cage’s “Nicolas Cage” opens the picture with a very in-character whoo-ah of eagerness, but he quickly displays his flaws. He failed as a husband to Olivia, played by Sharon Horgan. His genuine attempts to engage with his daughter Addy always end up being more about him than her. He’s so desperate for a comeback after a run of critical and commercial flops that he stands at a valet station and gives an uninvited audition to a terrified-looking David Gordon Green. He does not get the part.

To elaborate on the statement above, The Unbearable Weight of Massive Talent is about a version of Nicolas Cage. He is professionally successful but personally a shambles. He’s destitute, divorced, and has just lost a lifetime role. He’s worried that his teenage daughter Addy doesn’t like 1920s German expressionist movies. (Fun fact: Cage is presently married and the father of a boy named Superman.) “Nicky,” an uncanny valley version of himself who epitomises all of Cage’s famously odd excesses, including his propensity for yelling a lot, lectures him about his life choices.

At the end of his rope, Cage accepts a $1 million offer to visit the secluded Spanish home of a rich superfan and amateur scriptwriter named Javi Gutierrez (Pedro Pascal). Then, a CIA agent (Tiffany Haddish) intercepts him and informs him that his new patron is a gangster who abducted a politician’s daughter. She convinces Cage to find the girl, a Nicolas Cage admirer, by stating that he wants to create a film with Javi. The trouble is that Cage seems to like the man a lot. He’s not a particularly good spy despite his “nouveau shamanic” theatrical instincts.

Also Read, The Bold Type: The Show that depicts and explores Diversity

Unfortunately, the whole experience remains somewhat disjointed. There’s some very subtle Hollywood humour and a brief series of scenes where Cage tries his hand at spycraft. As Cage learns to reconnect with his daughter and his profession via Javi, there’s a loosely conceived “cynical egotist gets his mojo back” narrative. Through gags about Cage and Javi’s writing, there’s a recurring metacommentary on The Unbearable Weight of Massive Talent’s narrative, including the implication that the spycraft is only a hook to lure in fans. However, most of this appears to divert from seeing Cage and Pascal interact.

The Unbearable Weight of Massive Talent is, at best — and I say that sincerely because it has a rational and delightful raison d’être – real-person fanfiction. It unites Cage with Pascal’s original character for several freewheeling moments. They take LSD, debate about movie ideas, leap off scenic cliffs, and, in a nod, a 2021 immensely popular joke, determine Paddington 2 is pretty wonderful.

However, like all fanfiction, the film relies on you already having a deep affinity to its protagonist. The Unbearable Weight of Massive Talent doesn’t go much beyond Cage’s initial physical performance in terms of character development. His ex-wife and daughter are only generic placeholders for family relationships. The film skips over what makes him tick as an actor. It expects you to come in with a firm understanding of Cage’s prodigious career and its strange combination of highbrow and lowbrow performances.

The Unbearable Weight of Massive Talent also studiously avoids some of the most distinguishing features of Cage adoration, which stems as much from performative cultural hivemind dynamics as conventional Hollywood celebrities. Characters react to fictional Cage as they would to any other big-name action star with a varied career, rather than someone beloved in part because he takes a lot of roles in surrealistically bad movies and sparks heated public debates about whether he is fundamentally good or bad.

These fictitious Cages allow the actual Cage to marvel at his mythmaking, the genuine influence on his followers, and a platform to remind Hollywood of his versatility. It is an actor that can play popcorn fluff and voice characters in family-friendly animated flicks and the craziness of “Mandy” or the sorrow of “Pig.” The filmmakers don’t impose a value judgement on which of Cage’s films have the most worth, realising that a favourite picture is intimate and personal. What counts is that it does resonate on some level.

There are none of the quasi-ironic hyper fixations that transforms him from a person to an abstract emblem through things like pasting unhinged-looking images of Nicolas Cage about your house.

Perhaps this is because, while not quite nasty, this type of praise isn’t fully complimentary. Many meme cultures are becoming fascinated with something you despise, distancing art from its creators as genuine human people. And while The Unbearable Weight of Massive Talent may poke fun at Cage on occasion, it is primarily concerned with simply getting along with him.

Despite all of his meta-commentary on current cinema, Hollywood mechanisms, and the emotional weight of fans, Cage the man always understands what is expected of Cage the myth. In “The Unbearable Weight of Massive Talent,” he achieves the ideal combination of the two, resulting in one of his most intricate but crowd-pleasing performances.