Home Arts & Entertainment Poetry Ode on a Grecian Urn: The Beauty of Odes by John Keats 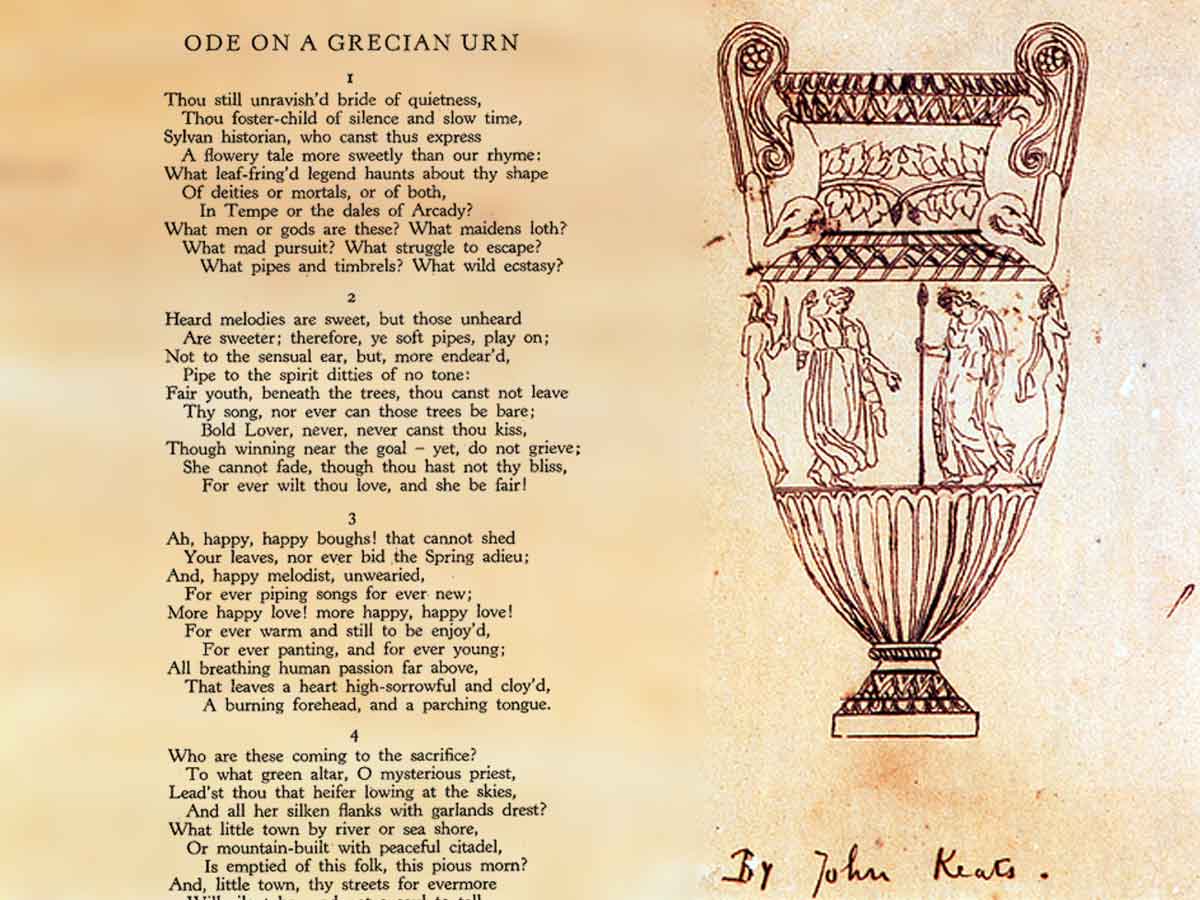 Also, the poem throws light on the contrast between the transient nature of him and love and the enduring art of mother nature, which had frozen their passion for all time and made it eternal.

CENTRAL IDEA OF ODE ON A GRECIAN URN

The central idea of the poem involves the belief that, whereas the brief experience of beauty is fleeting, the embodiment of the same experience in art is a source of joy that is eternal. Happiness and human life may be brief, yet art may enshrine them with an ideal beauty that outlives the years. The figures and all the symbols on the urn are gone, but the art has given them lasting durability and hence links the ages together. The Grecian Urn is considered as the happiest stroke of invention, the sudden and surprising detachment of the beauty from the flow of change and time.

OCCASION OF ODE ON A GRECIAN URN

The poem Ode on a Grecian Urn was written by Keats in the spring of 1819. The poem is not inspired just by a single urn, as no known urn portrays both Bacchanalian processions that mean a scene of dancing, singing, and merry-making and a pastoral sacrifice. It is believed that the urn, in the poem, is imagined by Keats that he has described by a mental combination of subjects derived from different urns. The urn has portrayed the scene of a pastoral sacrifice in the outline and also the poem uses the commoner Greek sculpture, Bacchanalian procession. Keats has combined well both the scenes on the imaginary urn and has described in his Ode.

CRITICAL INTERPRETATION OF THE ODE ON A GRECIAN URN

There are two things that make this poem a remarkable one. Firstly, it is the matures, almost final word, on the vision of Greek life and culture by the poet and secondly, it has been interpreted in a quite different manner and has given rise to endless controversy. In the first stanza of the poem, we can get the introduction, and in the second, third, and fourth we get the exposition of the main theme, and in the fifth, we get the conclusion.

The poem opens with the invocation and the urn is referred to as the “unravished bride of quietness”. Thus, the Urn is a symbol of timelessness and calm repose. The two opening lines together constitute one of those rich passages which have been described by Rossetti as the “pillars of Hercules of the human language”. Then follows a string of questions, which are in the same pictures. Then the poem proceeds with the answers to the questions in the second and the third stanzas.

This is how the main subject of the poem continues, which includes the scene of a Bacchanalian procession comprising the flute players, that youth singing under the trees, and the lover about to kiss. The scene makes the poor thing: the carven life- the silent music of the marble pipes, the unuttered song, the bold lover on the point of kissing, the beautiful maiden- all this imagined life is more real than the human life of audible melody and physical embraces. The lover on the urn is happier, for he may not enjoy the fruition of love, but he would always live and the beauty of her beloved would retain her beauty forever.

Poet prefers spiritual enjoyment to sensual enjoyment. In the fourth stanza, the poem portrays another scene on the urn which showcases a procession that is going to sacrifice a calf and is headed by a priest. Here again, Keats catches his poise and asks his mysterious priest about the procession with a series of questions. Then in the answering lines of the question, Keats gives a picture of the town which the people in the procession have vacated. According to Keats, the town will always remain desolate and no one will ever tell its tale.

In the last stanza, we get to know that the Urn is a beautiful object in Greek art and its surface is carved with so many beautiful objects. It also has pictures of men and women. Moreover, the urn includes the carved patterns of wild grass and branches, which are walked over by three revelers. In the last stanza, the poet has conveyed the message to his readers that it is the imagination alone that enables us to look into the life of things: intellect can lead us to nowhere.