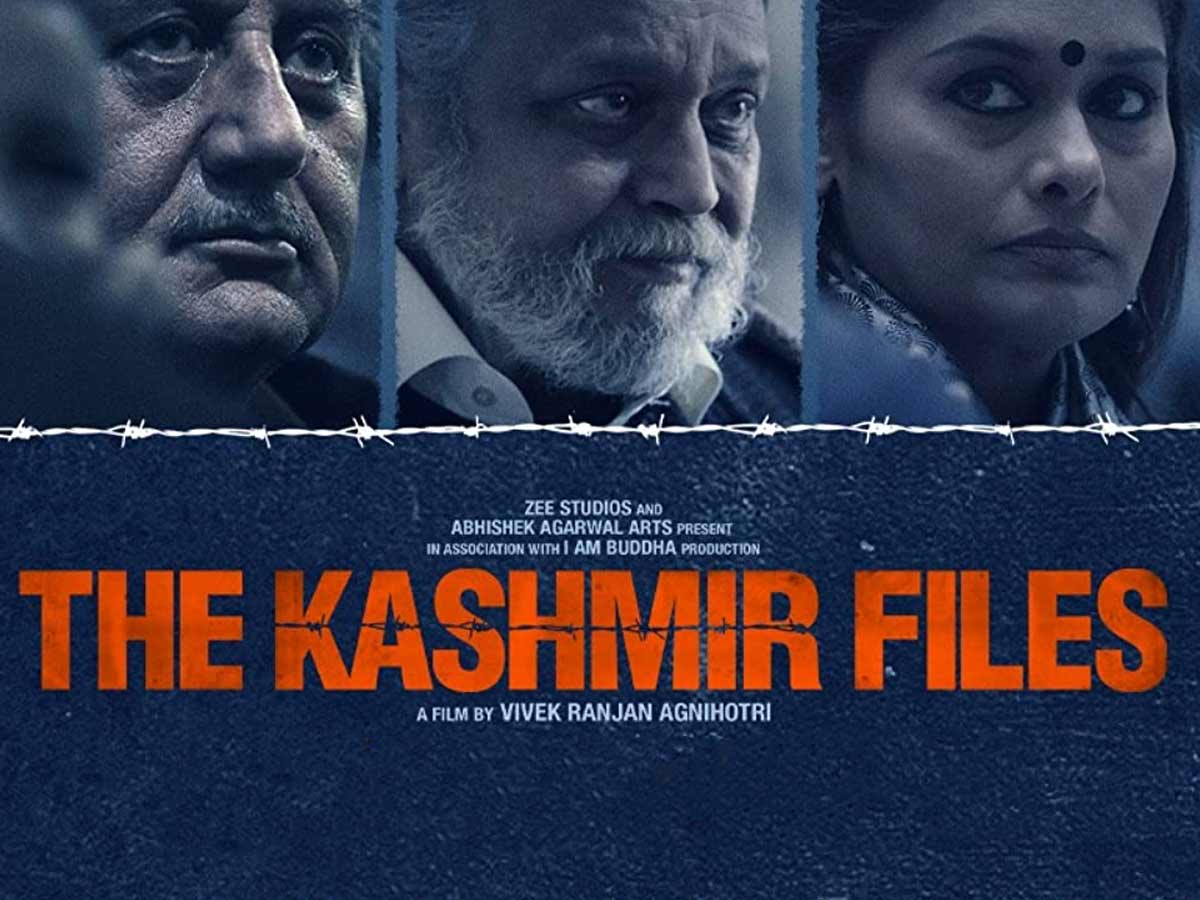 The Kashmir files need to be watched more by non-Kashmiri elements of society to comprehend the facts concerning Kashmir, and the film’s English subtitles would tremendously assist them in this respect.

The Kashmir Files, a much-anticipated Bollywood production, premiered in India on March 4, 2022. A small group of people viewed it at the multiplex hall of Wave Mall in Jammu’s Narwal Bye Pass. Political leaders, social activists, philosophers, authors, intellectuals, prominent current and former civil and police personnel from Jammu and Kashmir, and the film’s producers and actors gathered in Jammu on occasion. At the event, selected local media members were also present. The Kashmir Files will be released in theatres worldwide on March 11, 2022.

The Kashmir Files deviates from the standard Bollywood film structure in that it is centered on a story, mostly a love tale. In actuality, the picture isn’t based on a typical conventional narrative. Its narrative is directly based on video interviews with first-generation Kashmiri Pandit victims in 1990. That adds an element of genuineness to the film’s subject and pace. Because Kashmir and Kashmiri Pandits are such complex issues for anyone wherever in the globe, there may be some gaps in the picture in terms of study and development.

The Kashmir Files’ primary focus is on four key dimensions:

The filmmaker intelligently eliminated some areas that may have sparked unnecessary criticism and controversy to compensate for these flaws.

The Kashmir Files may be seen in two ways.

One, with unadulterated zeal! The world must learn the heartbreaking account of the 1990 genocide, which history has failed to record.

The 1984 Sikh riots have had primetime and cinematic moments (Hawayein by Amitoj Mann and Amu, starring Konkona Sen). Still, their culprits remain at large, and justice has yet to be served. Slanted narratives on the Gujarat riots of 2002, which condemned the majority group, have also been occasionally shot (Rahul Dholakia’s Parzania, Nandita Das’ Firaaq), garnering plaudits and prizes throughout the years.

All genocides, wherever they occur and whatever the victim, must be denounced as they have been in the past.

Vivek Ranjan Agnihotri wades in with a pile of accurate information, lays bare the scars, and films it all with the ferocity it deserves 32 years after the genocide and ‘ethnic cleansing’ that transformed the demography of Kashmir. When Article 370 was in effect in the 1990s, Kashmir enjoyed special status. Most political dynasties had pro-Pak sentiments and supped on terror. The valley resounded with lusty shouts of ‘Azadi.’ It was sprayed with graffiti reading ‘Indian dogs go home.’

Youngsters play cricket with an Indo-Pak commentary booming from a transistor during this history. Shiva, one of the cricket-playing kids, applauds Sachin Tendulkar, causing a community outburst. The community’s peace has been shattered, and the pressure cooker of seething communal rage explodes.

Vivek’s honest documentation of events as they happened involves the gunning down of entire families and using a bullet to silence sobbing newborns. It’s been told without embellishment. There are harrowing eyewitness descriptions of it, and it’s used as a final scene of the Kashmir Files.

Women of all ages are raped and humiliated, and it’s shown in all its heinous rawness.

Is it Kayar or Akalmand? Cowardice or survival instinct? A Kashmiri Pandit, prompted to practicality by his wife, hides under a barrel of rice till a neighbor discovers him. When terrorist Farooq Malik Bitta (Chinmay Mandlekar) shoots enough holes in the barrel for blood to mix with the rice, the deceased man’s wife is given a choice: take a handful of the bloodied rice or lose the rest of her family. It wasn’t a dramatic film, but rather a true story. If you can, watch it.

After Bitta, the student-turned-terrorist leader, forcibly feeds Sharada (Bhasha Sumbli) food and spares the family, watch grandfather Pushkar Nath (Anupam Kher) with his makeup on Mahashivratri and depart with her and grandsons, Shiva and Krishna, who are still infants. Watch as the inhumanity of the refugee camps is blatantly overlooked, even insulted, by the Netas of the day.

They are all unadorned truths that have been documented. For decades, a strong link between terror, politics, and complicit media has been dismissed.

Vivek Agnihotri revisits and retells the atrocities of the 1990s as an adult Krishna Pandit (Darshan Kumar) indoctrinated by bindi-wearing Professor Radhika Menon (Pallavi Joshi). Krishna, an activist with the ‘Azadi’ movement on the politically charged Delhi campus, is oblivious of the shocking truth about his family.

Pushkar’s arthi will remain until he returns to Kashmir with his grandfather (ashes). He also encounters a group of retired Kashmiris. Brahma Dutt (Mithun Chakraborty), an IAS official, a cop (Puneet Issar), a doctor (Prakash Belawadi), and a media guy (Atul Shrivastava) all played their parts in being helpless bystanders to the 1990 genocide. Krishna also meets Farooq Malik Bitta. The terrorist who went on Indian television without remorse admitted killing Kashmiri Hindus and then walked free.

Given the heinous horror that befell Kashmiri Pandits in 1990, The Kashmir Files is an essential record that needed to be filed in public and defies a conventional ranking.

The second approach to see The Kashmir Files is objectively cinematically when one feels sad and wishes that the tale had been significantly more compelling.

The narration loses much of its intended sharpness with flashbacks and a framework that provokes concerns rather than carrying a punch. It’s unclear why Krishna was permitted to grow up and give his all to the exact people who murdered his family.

Why the aged quartet, led by Brahma Dutt, insist on an elaborate cover-up to keep the truth from Krishna is self-defeating, considering that their irritation was that the genocide was never given its due in the public realm. In addition, no justice was sought for the victims.

Unveiling the terrible reality via Krishna’s self-discovery was an excellent method to present the tragedy of what occurred in and to Kashmir. Krishna was particularly moving when he looked at a group image and wondered who the people in the background were.

The overlong and non-linear script, on the other hand, does not provide the gratification of viewing Krishna’s entire arc; his journey from darkness to light needs to be conveyed with greater clarity. It would have been more heartbreaking if there had been heart-piercing music that lingered rather than poetry that wails. The last scene of the massacred family is unmistakable, and however, it may have been put sooner.

And watch it because it’s a long-overdue narrative that deserved to be told.

Some would even call some of the scenes’ too violent.’ Still, they allow the director to deliver his message of ‘Right To Justice,’ especially in light of the community’s trauma. The Kashmir Files was shot in Kashmir, and maintaining loyalty to the setting adds a lot more realism and feel to the story. The film’s pace is expertly edited, but the speech stays genuine to the location, and subtitles come in help when you struggle to grasp the language.

Documentation has a significant influence on events in our lives, and this fact is fully supported and acknowledged in the Kashmir Files. Despite being disproportionately focused on a humanitarian viewpoint, the image offers a relevant socio-political message. The transformation of hard-core terrorists and terror planners into political and social influences in Kashmir valley has been shown professionally.

The moral of the story emphasizes the importance of remembering historical truths. They must be recognized to prevent previous mistakes from repeating in the future.

The Kashmir files need to be watched more by non-Kashmiri elements of society to comprehend the facts concerning Kashmir, and the film’s English subtitles would tremendously assist them in this respect. In the end, the Kashmir Files sends a perfect message.

The filmmaker places the onus and obligation of bringing the positive parts of Kashmir to the world on the shoulders of Kashmir’s younger generations, in whom he has tremendous faith. True, this picture does not mark the narrative’s conclusion, but it does pave the way for new aspirations and chances in Kashmir. There is an urgent need to take the film’s thread forward for the welfare of Kashmir.

Atrocities perpetrated against minorities after 1990 have also made their way into the Kashmir Files and have a powerful message to impart. Except for a few undesirable situations, Bollywood has a general desire to bring in sensationalism in films to play its role, which this production has typically avoided. The use of extended duration frames often introduces an element of monotony, and such structures may have been divided into two or three, if possible.

However, the number of threat calls and texts has abruptly escalated, with many of the callers urging him to cancel the film’s distribution in India or risk losing his life.”