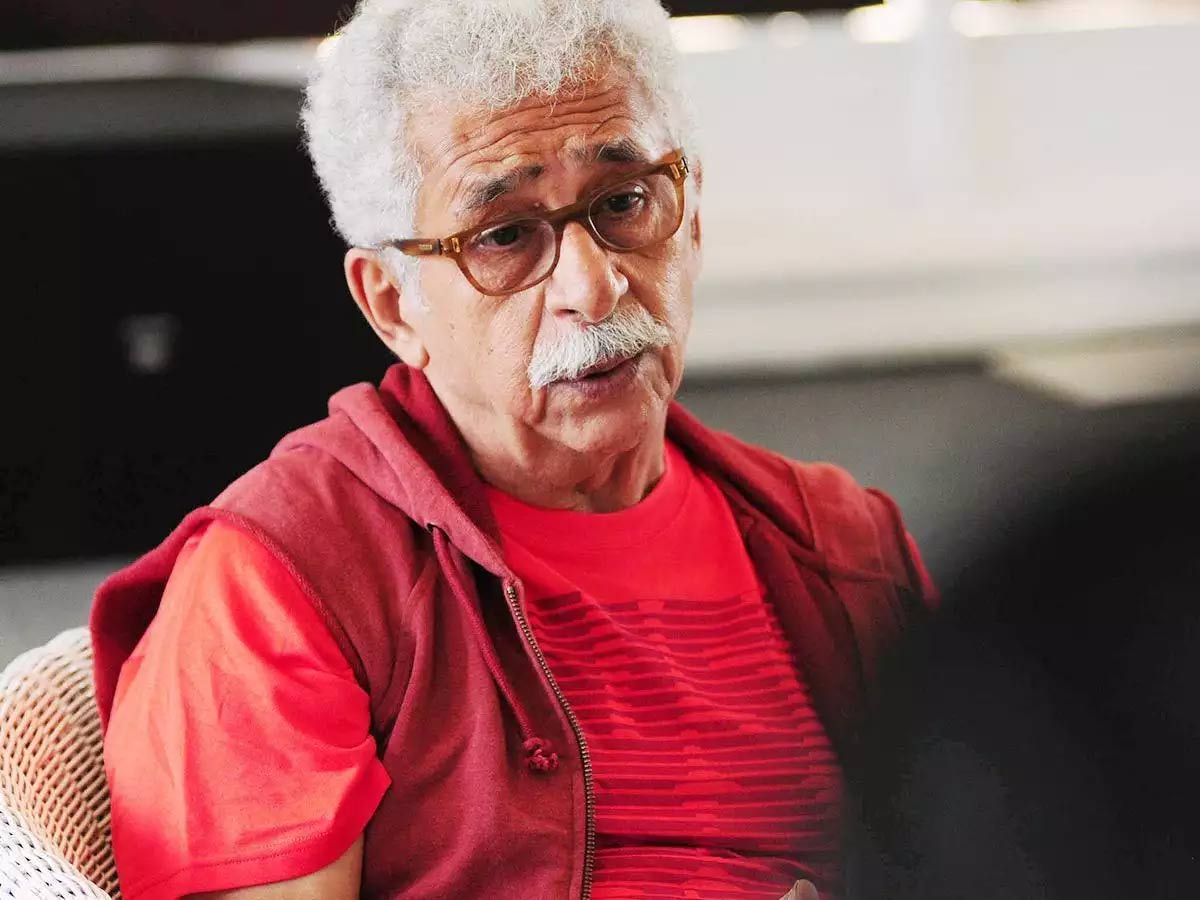 ‘No form of art reaches beyond ordinary consciousness like film does, right to our emotions, deep into the darkness of the soul,’ Swedish filmmaker Ingmar Bergman once said.

Naseeruddin Shah’s artistry has always struck me in the same way. His greatest achievement as an actor and celebrity is his flexibility, which is fascinating outside the confines of filmmaking.

In one film, he’ll break your heart with his terrible discoveries about the human psyche; in another, he’ll mock those very principles; and in yet another, he’ll be just plain cruel seeking no atonement. Every line on his face tells a narrative, and every twinkle in his smile opens a new chapter.

There is no end to lauding the magic and method of one of India’s greatest magicians.

Critics have recently hailed Kundan Shah’s film, Jaane Bhi Do Yaaro, as a prophetic look into the post-truth era. I have to disagree. It’s a picture that feels all too true, nearly universal in its depiction of subjects like media corruption, power, and relationships. The plot revolves around the misfortunes of two photographers, Vinod Chopra (Naseeruddin Shah) and Sudhir Mishra (lt. Ravi Bhaswani), who are attempting to generate money for their new shop in Haji Ali, Bombay (now Mumbai). It’s both humorous and dark in equal parts. Watch it for the Mahabharata play sequences alone, and you’ll understand why it’s a cult classic in Indian cinema.

Critics have recently hailed Kundan Shah’s film, Jaane Bhi Do Yaaro, as a prophetic look into the post-truth era. I have to disagree. It’s a picture that feels all too true, nearly universal in its depiction of subjects like media corruption, power, and relationships. The plot revolves around the misfortunes of two photographers, Vinod Chopra (Naseeruddin Shah) and Sudhir Mishra (lt. Ravi Bhaswani), who are attempting to generate money for their new shop in Haji Ali, Bombay (now Mumbai). It’s both humorous and dark in equal parts. Watch it for the Mahabharata play sequences alone, and you’ll understand why it’s a cult classic in Indian cinema.

It received the ‘Golden Peacock’ for Best Film at the International Film Festival of India, as well as Best Film at the National Film Awards Hindi feature film category, directed by Govind Nihalani and written by Vijay Tendulkar. Lahanya Bhiku (Om Puri) is a humble peasant who has been arrested to cover up his foremen’s rape and subsequent murder of his wife, Nagi (played by Smita Patil). The violence he witnesses silences him both literally and metaphorically. Even during the climax, when the final act of violence occurs, it is interspersed with metaphors without becoming overly didactic.

In this social drama, Naseeruddin Shah plays a significant part. He is the government-appointed young upper-caste lawyer who would handle Bhiku’s case. He is met with complete silence on his behalf, forcing him to delve into Bhiku’s sociopolitical background for answers. Through him, the audience learns essential things.

Shah is unyielding in his role, desperately trying to persuade Bhiku to speak, insistent with empathy in his voice, the desperation in his voice ringing clear when he says “… aise chup baithe rahoge toh main bhi kya kar paunga tumhare liye” (roughly translated as: If you are so silent, how will I be able to help you?) While Om Puri’s quiet acting is lauded as excellent, which it really is, Shah’s performance plays out like a dramatic monologue. In 1981, it earned him the Filmfare Award for Best Actor.

This film, written and directed by Neeraj Pandey, has served as an inspiration for a new breed of OTT thrillers, such as A Thursday (2022). It depicts the lengths to which a common guy, played by Naseeruddin Shah, will go to shake up the system to express his dissatisfaction with the administration. Surprisingly, no official records remain of this episode, and our narrator, Prakash Rathod (Anupam Kher), the retiring Mumbai police commissioner, feels everything transpired for the best.

Shah is the film’s sole protagonist-antagonist, opposing the government while remaining an “aad aadmi” (common man). He skillfully walks the line between didactic and melodramatic, weighing out the scale of the part with every dialogue he gives, notably when he tries to explain to Rathod the reason for this procedure and uses the analogy of cockroaches in his home. If you look attentively, you will notice that his pride (as well as a tinge of patriotism) borders on an uncontrolled nature that is threateningly noticeable, even as you view it on your screens now. In addition, Shah collaborated with Pandey on another similar performance in Aiyaary (2018).

The film, directed by Sai Paranjype, follows the lives of a crippled school principal, Anirudh Parmar (portrayed by Naseeruddin Shah), and a young widow, Kavita Prasad (played by Shabana Azmi). It was quite pioneering in its treatment of disability concerns, particularly the ‘touch’ (read: sparsh) of love among the disabled, earning the National Film Award in the Hindi feature film category that year. It is rife with metaphors for sight and blindness, adding a layer of complication to a plot that is already preoccupied with the grey regions in human relationships.

Shah’s face stiffens during the incident in his office where Kavita refers to the blind as “Bechara” (poor thing). He nonchalantly removes his grin to inform her that they may be blind, lacking in something, and in need of assistance, but they don’t want to be reminded of their helplessness over and over. As the story progresses, his head and heart combine, blinding him to love. Every time I watch the film, I am moved by his performance as a crippled guy, observing the subtle aspects that make it so nuanced.

I recognize that having a fully capable actor play the role of a crippled guy is inherently wrong, but this was Bollywood in the 1980s, and I’m afraid we have to be lenient. Shah’s performance earned him the Filmfare Award for Best Actor that year.

Abhishek Chaubey’s directorial debut transports us to the North Indian hinterlands and into the lives of the Vermas. Khalujaan (Naseeruddin Shah) and Babban (Arshad Warsi) are two criminals who have a love-hate relationship that is so charming that it makes you forget about the heinous acts they are capable of committing. Once they seek refuge with Krishna Verma (Vidya Balan), the three embark on a beguiling voyage of love and secrets. In the Indian context, it skillfully incorporates aspects of the spaghetti western and neo-noir.

We are compelled to break into a bewitching smile at the old man’s courting skills in a scene where Shah is explaining to Balan why his names, which seem ancient, do harm to him and that he should be addressed as “Jaan.” He is amorous, but in a vulgar way, which adds to Khalujan’s attractiveness, who is already extremely eccentric in his dress and remarks for his age. Shah admitted to Anupama Chopra for NDTV that this was a major job for him to break out of the father-son roles he was being offered at the time, and he shows every inch worth it during the film’s 115-minute length.

Masoom, directed by Shekhar Kapur and based on Erich Segal’s Man, Woman, and Child, has been recognized as one of Bollywood’s classics, starring Shabana Azmi and Naseeruddin Shah as the Malhotras, blissfully married with two kids, Pinky and Minni. However, the revelation of Mr. Malhotra’s nine-year-old kid, Rahul (played by Jugal Hansraj), from his previous romance with Bhavana (Supriya Pathak), causes havoc in his otherwise happy existence. What follows is a mature story about betrayal, marriage, and love that holds up a mirror to childhood innocence.

The abrupt shift in character that occurs in Shah during this film has a profound impact on me. Initially, he is full of laughing, jokes, and songs, but they quickly turn into a sense of confusion. Shah’s acting traces the growth so brilliantly that when he is at the railway station, enquiring if everything is for Rahul’s voyage, you begin to notice how frivolity has transformed into responsibility and only affection abounds. The film is beautifully filmed, and the narrative is extensively detailed, all of which contribute hand in hand to bringing across the basic complexity of D.K. Malhotra’s predicament.