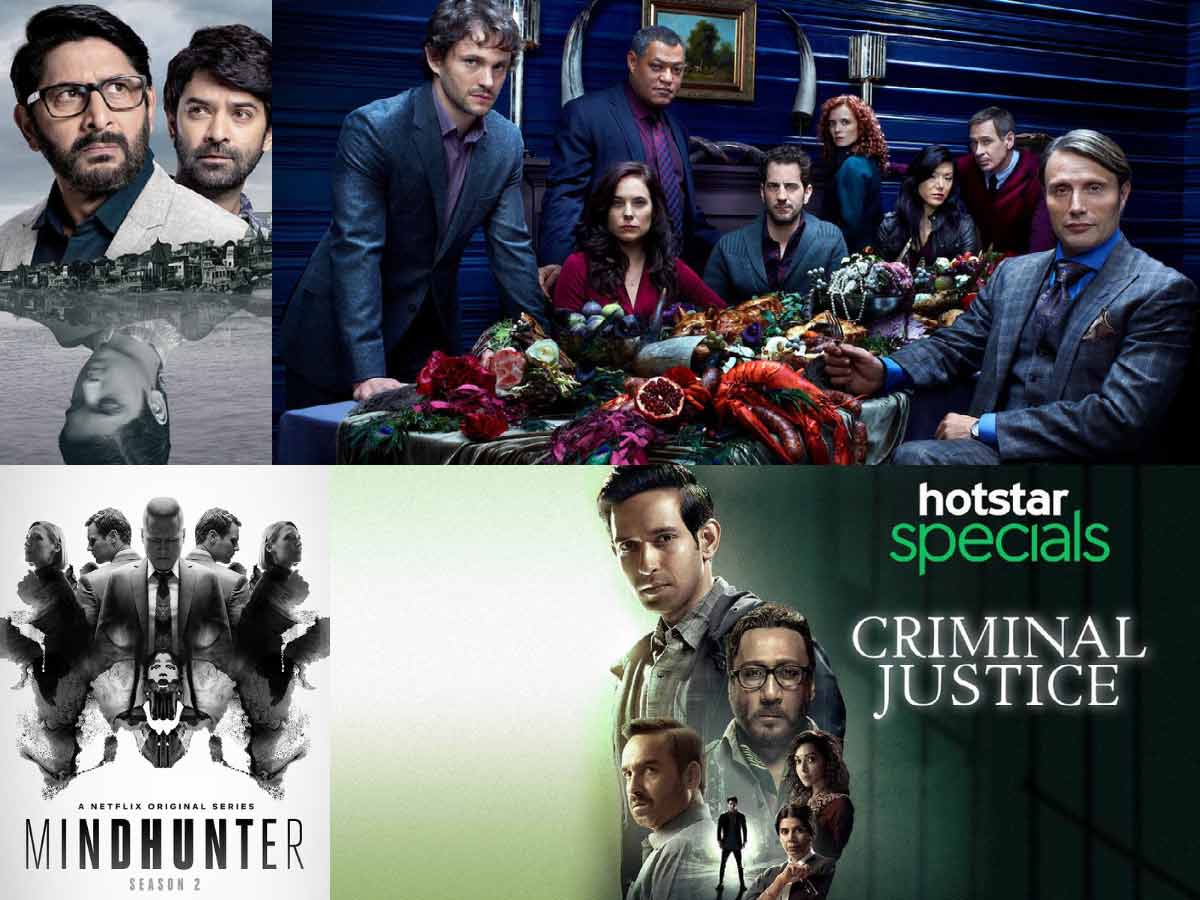 These thriller web series will have your heart racing.

Suppose there’s one genre we can confidently recommend. In that case, it’s thrillers: What might be more pleasurable than the sensation of being on the edge of your seat, interspersed with action scenes and high-stakes romance?

So, the next time you’re looking for titillating thrills that won’t cease just because one episode is over, check out these heart-pounding thriller web series. If you’d rather watch a series, we have some suggestions for you as well.

The thriller concept has brought the film industry several jewels. They are full of excitement, intrigue, and surprises that pump up the viewers’ adrenaline on a dull night. On the other hand, the Thriller web series keeps your eyes glued to the video until the very end. The thrilling essence of these series still catches you off guard. They’re also fascinating because of the breathtaking scenes and layered plotlines. Here are several thriller web series to watch on an OTT website.

This thriller web series on Netflix’s OTT channel revolves around real-life suspects and the FBI’s Behavioral Science Unit throughout two seasons. Mindhunter is one of the best psychological thriller web series, based on a true crime book by the same name and written by David Fincher. The series’ slow-paced movement is satisfying in the shape of the narrative and subplots. There are descriptions of actual events used in the depiction, not for the faint of heart. The intriguing plot of the series will hook you right away.

David Fincher is a big fan of serial murderers. When he adapted his grim, brooding aesthetic to a certain kind of sociopath, the director of Seven, Zodiac, and The Girl With the Dragon Tattoo introduced Netflix into the realm of original programming.

In Mindhunter, Fincher (who directed a few episodes) follows a young, conscience FBI agent, Holden Ford (Jonathan Groff), his boss, Bill Tench, and psychologist-turned-consultant Dr. Wendy Carr (Anna Torv), as they create a branch of the Bureau charged with investigating a “new kind of crime” that ignores what other law enforcement officers consider logical motivations.

The mythological thriller web series Asur marked Arshad Warsi’s first foray into the OTT domain. The story’s plot is set in the gullies of Benaras. The correlation between the modern-day serial killers and the mythological background and the characters’ histories adds to the plot’s intrigue. Vishesh Bansal, who most recently appeared in TVF’s Yeh Meri Family, gives a surreal performance in this film. Asur takes the untapped and theoretically great genre of mythology and makes it his own.

Asur has everything that one can suspect. A mystery series will hold you hooked for the whole season, and the final episode will take you by surprise.

Unbelievable deals with the delicate subject of rape by presenting the case of a prostitute and female police officers investigating it. The series would not shy away from depicting the grim realities of a victim’s life. Around the same time, it depicts the hard effort that the police put forward into apprehending the suspect. It is one of Netflix’s must-see mystery thriller web series.

Toni Collette and Merritt Weaver lead a talented ensemble in this miniseries adaptation of a Pulitzer Prize-winning story about searching for a serial rapist and the vexing policy lapses that should have minimized the severity of the crimes. Kaitlyn Dever stars as Marie Adler, a rape survivor. The latter pleads guilty to making a false police claim after prosecutors question what happened to her, causing her rapist to operate in a separate state. Unbelievable take an unemotional approach to the shortcomings of the justice system and the difficulty countless survivors face only to be taken seriously throughout its eight seasons.

It’s one of the most terrifying thriller web series you’ll have.

Before the debut of the celebrated Criminal Justice: Behind Closed Doors, the series had a previous season that went unnoticed. Criminal Justice is a reboot of the same-named British television series set in India. In this story, a bizarre turn of events lands an innocent man in prison. What happens next serves as the series’ foundation. Vikrant Massey, Pankaj Tripathi, and Anupriya Goenka all deliver outstanding performances.

Vikrant Massey adds Criminal Justice to our list of thriller web series to watch with a consistent success alongside Jackie Shroff and the very talented Pankaj Tripathi.

The storyline revolves around obtaining Justice for an innocent citizen who is not the prime suspect in the murder of a young child. The ending, like all movies and web series, would announce the main character.

The series gets boring after a few episodes; however, the show’s biggest draw is the series’ leads.

Hannibal, a reimagining of author Thomas Harris’ cannibalistic supervillain Hannibal Lecter (Mads Mikkelson) by Pushing Daisies showrunner Bryan Fuller not for the faint of heart. That is unless you find imagery like a mushroom-covered skeleton or an unsettling stag-man beast strangely calming. It’s remained an incredibly adventurous procedural since it first aired on network TV. However, even with just three seasons, it’s well worth picking up a fork for. You’ll devour it between the carnage and spine-chilling terrors.

Anushka Sharma’s production company, Clean Slate Productions, is still looking for new and exciting projects. Pataal Lok, a highly complex web series, was introduced to the public. The plot depicts glimpses into the lives of characters, both offenders and investigators. Around the same moment, it bears the intriguing pursuit of underworld suspects. It contains several powerful dialogues that do, in fact, pose the issue of our social outlook. Jaideep Ahlawat, Abhishek Banerjee, and Neeraj Kabi all give outstanding performances. It is, without a doubt, one of the best mystery web series to have appeared on OTT in recent years.

How to Get Away with a Murder

With a title like that, you know it’s going to be a good one. The thriller web series, created by Peter Nowalk under the Shondaland banner, is a legal thriller with a kick featuring criminal defense attorney and law professor Annalise Keating (Viola Davis) and her inner circle law students who become entwined in a murder. For its long, multi-Emmy-nominated run, the show produced a steady stream of complicated mysteries, outstanding results. And unexpected surprises as Annalise and everyone around her attempted to avoid the law, shed light on government conspiracies, and made harmony with their inner demons. That is to say, this network show could not be more binge-worthy.

It’s clear why early reviewers likened Ozark to Breaking Bad: both feature drug money and morally ambiguous characters. But, as Marty Byrde, a genius Chicago-based investment analyst who relocates his family to Missouri’s Ozarks on a life-or-death deadline to wash truckloads of cash for Mexico’s second-largest cocaine cartel, Jason Bateman never goes full Heisenberg, even as he gets closer and closer to the line in later seasons. His character’s biggest reason for doing so is to protect his family since he’s been trapped in this underworld for decades rather than wanting to take it over.

Laura Linney, Jason Butler Harner, and Julia Garner all give unforgettable performances that help this slow-burn work wonders despite its tense and gloomy (literally—it looks so dark) runtime. The Byrde saga isn’t as amazing as its spiritual forefather, but it’s stronger than all of its cousins (including Bloodline!). It would be a shame not to give it a chance.

Also Read, What are the best romantic web series on Netflix?

It looks like the Lifetime-iest of Lifetime shows since it was once a Lifetime program that only found an audience after the network sold the streaming rights to Netflix, transforming it into a binge-worthy smash. You know just how to make any good-bad TV episode, from the character names (i.e., Peach Salinger—yes, like J.D.) and cringe freshmen English lit major bookishness to the seriousness in which the cast engages in its absurd.

About the fact that it is a juicy serial killer story, Joe (Penn Badgley), the serial murderer with a Dark Past in question, slithers his way through the lives of a helpless girl and her strange friends, killing them all before fleeing to LA to escape capture, where he, indeed, murders again. The best show, in my opinion, includes a massive country house, an almost-threesome, a phony suicide, and a character simply leaving a jar of urine on a shelf. That concludes the first episode.

Honsla Rakh: A Comedic Journey and Fun for Family