Home Arts & Entertainment Fiction Death Note: An Amazing Anime with a Dark Side 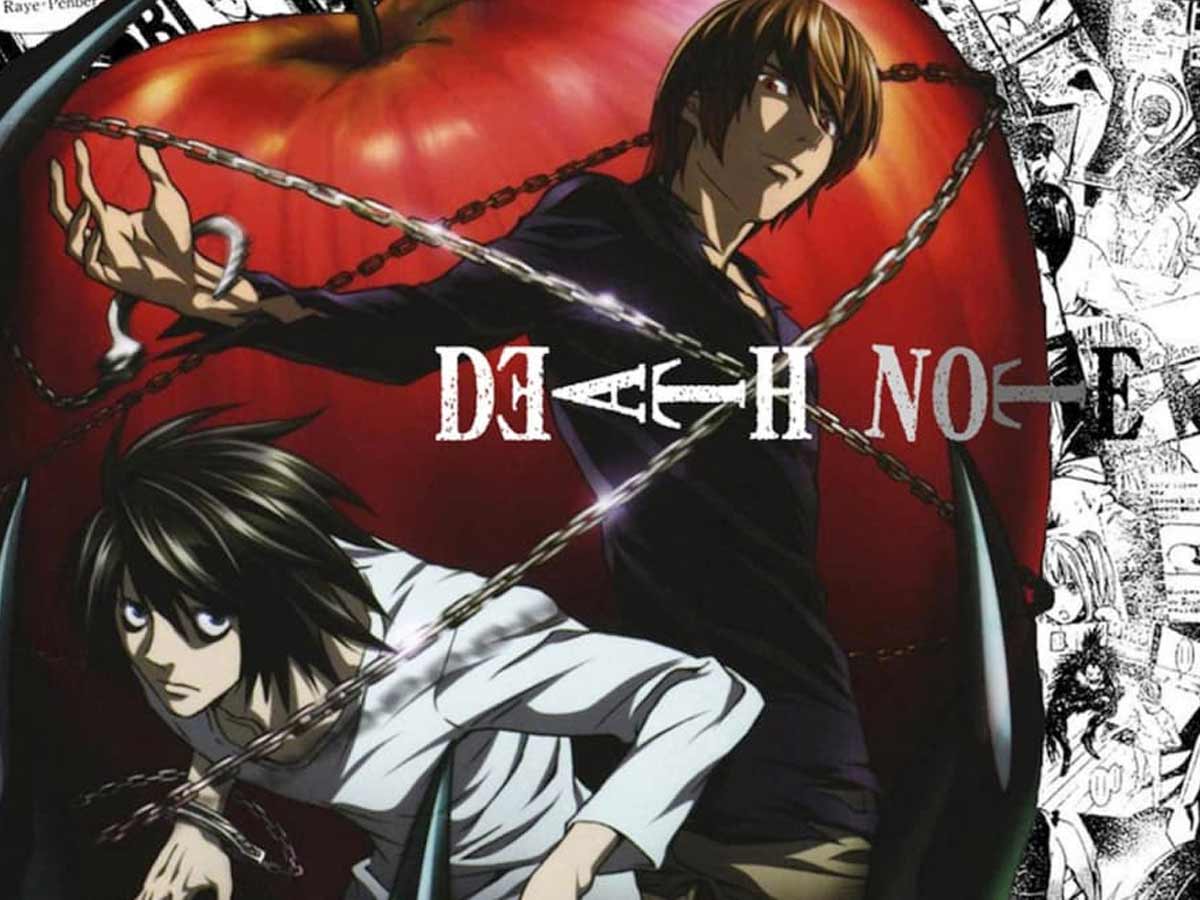 The anime initially broadcast in October 2006 and was finished in June 2007. This 37-episode narrative, with a sleek graphic style and animation, progresses with many twists and turns while maintaining amazingly complete characters. There’s a reason this is one of the finest anime series available.

Death Note is a Japanese anime based on Tsugumi Ohba’s manga of the same name, which was written and drawn by Takeshi Obata.

The anime begins with “Light Yagami,” an intelligent and handsome high school student and the son of a police officer. He is concerned with crime in the globe and wishes to rid the world of criminals. One day, he comes upon a Note book labelled “Death Note.” It is a notebook of a “Shinigami,” a Japanese Death God. Reading the rules in the book, he discovers he can murder someone just by putting their name in it. He proves it by assassinating an escaping convict. “Light Yagami” is now virtually a deity. As the number of offenders killed increases daily, the police and the public grow afraid. Light Yagami assassinates criminals he sees on the news.

Light makes public pronouncements via recorded cassettes and explains why he is executing criminals. People referred to him as “Kira.” The true adventure and excitement begin when “Shinigami” arrives in the real world and a new cop, “L,” is assigned to discover this “Kira.” The battle of wits between “Light” and “L” to discover “Kira” becomes the anime’s major topic. What follows is a hazardous game of cat and mouse, as Light (now going by the nickname Kira) and L tries to figure out who the other is while keeping their own identities hidden.

Death Note is the story of Light, a remarkably gorgeous and smart young man who one day discovers a notebook belonging to an extraterrestrial monster known as a Shinigami – a “god of death.” To cut a long tale short, when you write a person’s name in the book according to the instructions, that person dies. A “Death Note” has seldom come into the hands of a human, and no one has ever utilised it to impressive effect in the past. But Light isn’t like that. Light has a distinct–indeed, crazy–sense of justice. He believes that by using the Death Note to eliminate the world’s criminals, he can genuinely make the world a better place.

Before long, a slew of mafiosos, killers, and ne’er-do-wells are found dead in strange circumstances. Light is only known to the rest of the world by the alias Kira, which is based on a mispronunciation of the English word “killer.” But soon after long, Kira’s name is on everyone’s lips.

Having a rampant serial murderer on the street who murders by supernatural methods causes considerable concern among world governments and police forces, not to mention ordinary individuals who are aware that Kira is only targeting criminals and not law-abiding civilians. Enter L, a brilliant young investigator who has worked on some of the world’s most infamous cases.

Also Read, Hellbound: The art of Webtoons into Live Action

Mostly, it’s a solid formula, and as the episodes advance, Death Note subverts expectations with a few well-executed plot twists that turn the entire narrative upside down. After so much story development, one episode dubbed “Renewal” functions as a recap, showcasing all that has happened up to that point before rushing into the epic anime’s last spectacular act.

Every episode feels momentous as well, and despite the series’ mainly gloomy, brooding tone, Death Note breaks this stifling tension with occasional well-worked spurts of humour to provide some welcome brightness. It’s not overbearing, either, and it keeps the programme from devolving into melodrama.

However, it is the characters that make this series so charming. Light Yagami is an intriguing pick for the main character. Throughout the series, his pessimistic opinions are continually presented. Although his motivations become increasingly unstable and aggressive as the story progresses, there is still some sympathy for his cause. In contrast, L begins as an alienating figure when we first meet him, but rapidly becomes a lovable character as the series progresses.

Although his motivations become increasingly unstable and aggressive as the story progresses, there is still some sympathy for his cause. In contrast, L begins as an alienating figure when we first meet him, but rapidly becomes a lovable character as the series progresses.

The supporting cast is similarly intriguing, yet with a book based so strongly on the notion of death, there are a good number of significant and small characters that meet their deaths in Death Note. This maturely written series undoubtedly explores some extremely fascinating issues around death and morality, integrating neatly with the series’ primary narrative line but never impeding the main tale being conveyed.

In terms of ultimate focus, Death Note was written from the perspective of a little child regarding the world. This anime has the potential to break you down psychologically. It’s chock-full of drama and disturbingly pertinent real-life circumstances. We’re not sure whether to feel sympathy or rage towards the primary characters. If you want to watch a suspense series, Death Note is the finest choice. Enjoy your viewing.

Unlike Light, L has no sense of fashion, cradling himself into a near ball so he can think properly, and despite being rail thin, he has a sweet tooth. Except for their intellects, L and Light are diametrically opposed. When Light sneaks his way onto the Kira investigative team and becomes L’s sole genuine buddy, the game is on.

Of course, Death Note’s point of view is that the protagonist is actually Light’s Moriarity to L’s Holmes. A villain as an entertainment highlight is not a new concept; consider Shakespeare’s Richard III, which has an ignoble main character who addresses the audience while plotting. More recent examples include The Sopranos, Pulp Fiction, and the eerily similar Showtime series Dexter. Indeed, it is not Light’s fame as a megalomaniacal lethario that jeopardises the Death Note series. In fact, this point of view is so uncommon in the anime industry that it’s invigorating.

What makes Death Note so disturbing is its complete absence of a moral compass. The manga’s writers have stated that the series’ purpose was never to investigate the consequences of Light’s actions; rather, it was to offer a dramatic thriller with a cat-and-mouse game. I understand that Tsugumi Ooba and Takeshi Obata were not intending to do a philosophical comic for Shonen Jump.

Light is portrayed as a hero. Even members of L’s squad say that they are unsure whether capturing Kira is the proper thing to do because he is doing so much good for the globe. L himself isn’t concerned with justice; he just wants to get his guy.

As the story develops, Death Note becomes not just ethically unstable, but also unrealistic. Wars come to a halt as Kira’s work progresses. Crime rates are falling. People all throughout the world are living in harmony. Doesn’t it sound fantastic? However, as we discover throughout the series, the Death Note can only be used if the possessor knows the name and face of the person to be killed.

Could Light/Kira help to reduce crime in first-world nations where the names and images of individuals on trial are publicised every day? Perhaps. However, large portions of the earth are not in the first world. Countless nations throughout the world are virtually “off the grid,” many of which have some of the greatest levels of corruption and anarchy.

Nobody reports when a hamlet is destroyed in a remote corner of Africa. Nobody knows the identity of the thousands of troops in some want to be dictator’s army who are slaughtering people indiscriminately. You must have media in order for the Death Note to function. There will be no luck if there is no publicity. What a reasonable gap in the plot!

Death Note is both fascinating yet engaging. Despite my disdain for the programme, L rapidly became a fan favourite. His quirky demeanour and distinct style, as well as the fact that he is the genuine hero of the programme, make him a distinctive figure. There is a surprising amount of comedy that helps to brighten the depressing tone (and not in a perfunctory or inappropriate way). The Shinigami universe is inventive, and while the programme cannot capitalise on it, the Death Note’s “what if” notion is a philosopher’s dream.

I thought the morality displayed was imperfect throughout, and it has other issues, such as a reliance on overused shonen archetypes like internal narrative and an incredibly perplexing plot twist two-thirds of the way through that nearly ruins the final third–but the twists and turns along the way kept me engaged throughout.

The long and short of it is that Death Note is completely unsuitable for the Shonen Jump demographic that it is aimed for. Teens in middle school and early high school will have a tough time distinguishing between the good and the terrible. (In fact, some adults do!)

The developers may have intended to build a straightforward thriller, but they created a universe that begs for ethical explanations. It is unforgivable to provide none. My grade strikes a compromise between the facts: it’s a good thriller, but it may be ethically damaging to the audience it’s attempting to entice.