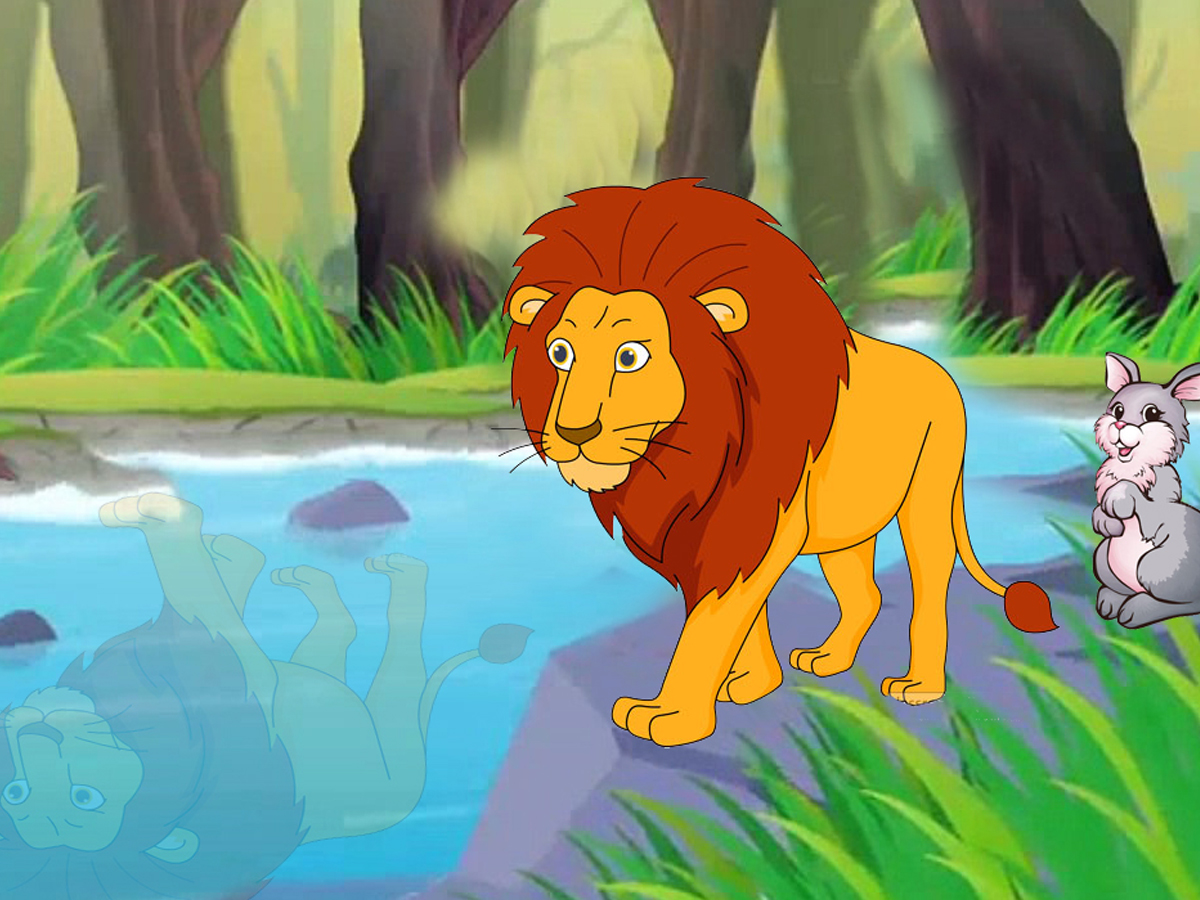 Any of these are concise and straightforward stories. Currently, these are so simplistic that they are most possibly used somewhere in children’s literature. The depth of the message endures the same, however.

These Short Stories with morals are still strong and have values and messages behind them. Really, exactly how strong a 200-word story can be is nuts.

Here are some more of the best brief moral tales:

The Short Stories with Morals!

An Old Man Lived in the Village 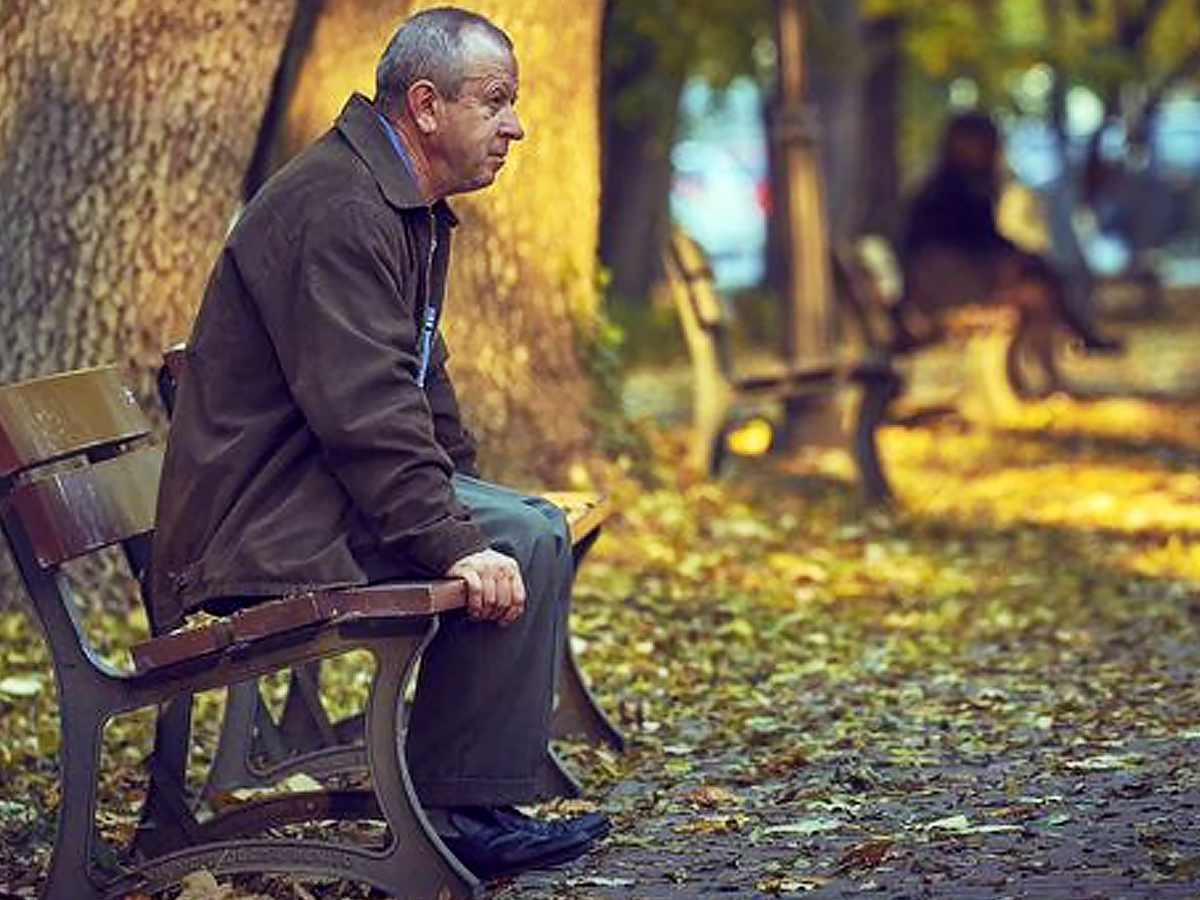 In the village lived an elderly man. He was one of the world’s most unlucky individuals. He was bored with the whole town; he was always gloomy, he complained endlessly, and he was still in a low mood.

The longer he lived, the larger bile he grew, and his words became more poisonous. He was avoided by people, and his misfortune had been infectious. Even being comfortable next to him was unnatural and insulting.

He generated in others a sense of unhappiness.

Yet one day, when he was 80 years old, something unique happened. Everyone immediately began to hear a rumor:

Today, the old man is happy. He doesn’t whine, he laughs, and even his skin is freshened.

The entire village assembled. They asked the old man:

Villager: What was going on with you?

“Nothing unusual. I have been seeking pleasure for eighty years, and it has been futile. And so I wanted to live and love life without happiness. That’s why now I’m happy.”—An Old Man.” 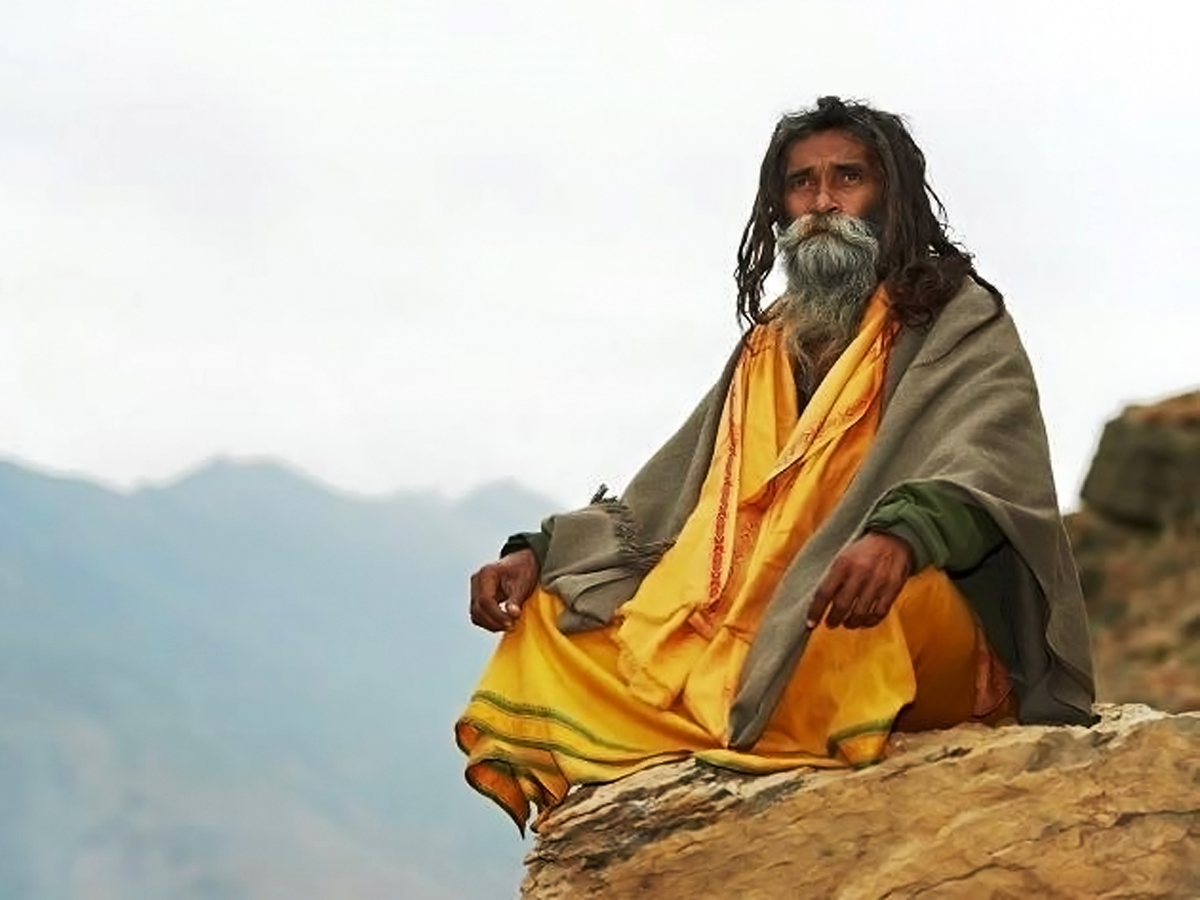 People came to the wise guy, each time moaning about the same concerns. He told them a joke one day, and everyone erupted with laughter.

He told them the same joke after a couple of minutes, and just a handful of them grinned.

No one smiled some more as he said the same joke for the third time.

“You can’t laugh over and over at the same joke. Then why are you crying over the same thing at all times? 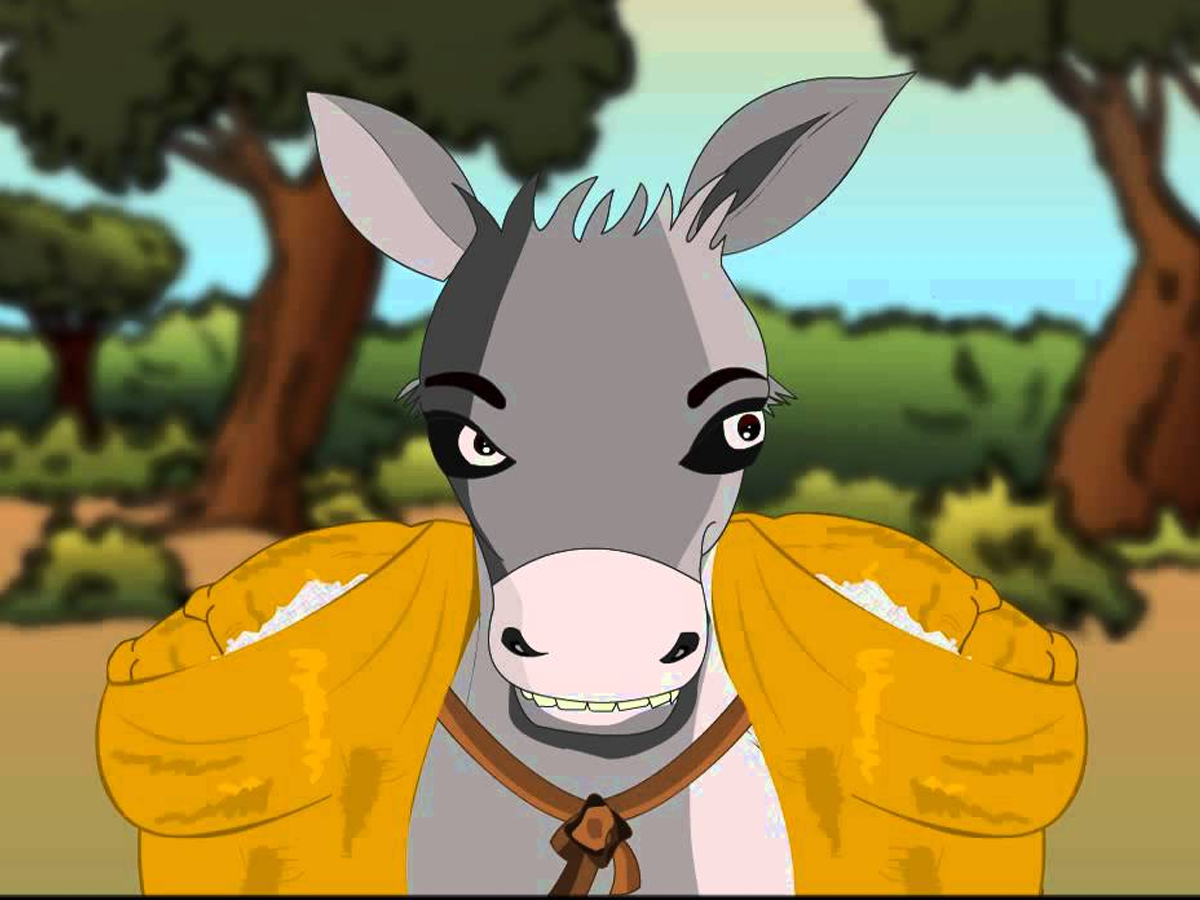 A salt trader used to pull a salt bag to the market every day on his donkey.

They had to pass a creek along the way. The donkey accidentally tumbled down the stream one day, and the salt bag plunged into the river as well. In the bath, the salt melted, and thus the bag is very light to hold. The donkey was delighted.

Then each day, the donkey continued to play the same trick.

The seller of salt came to understand the trick and wanted to show him a lesson. He loaded a bag of cotton onto the donkey the next day.

Again, in the expectation that the cotton bag would always get lighter, it played the same trick.

But it became tough for the dampened cotton to bear, and the donkey suffered. A lesson was learned. After that day, it did not play the trick anymore, and the seller was satisfied.

Having A Best Friend 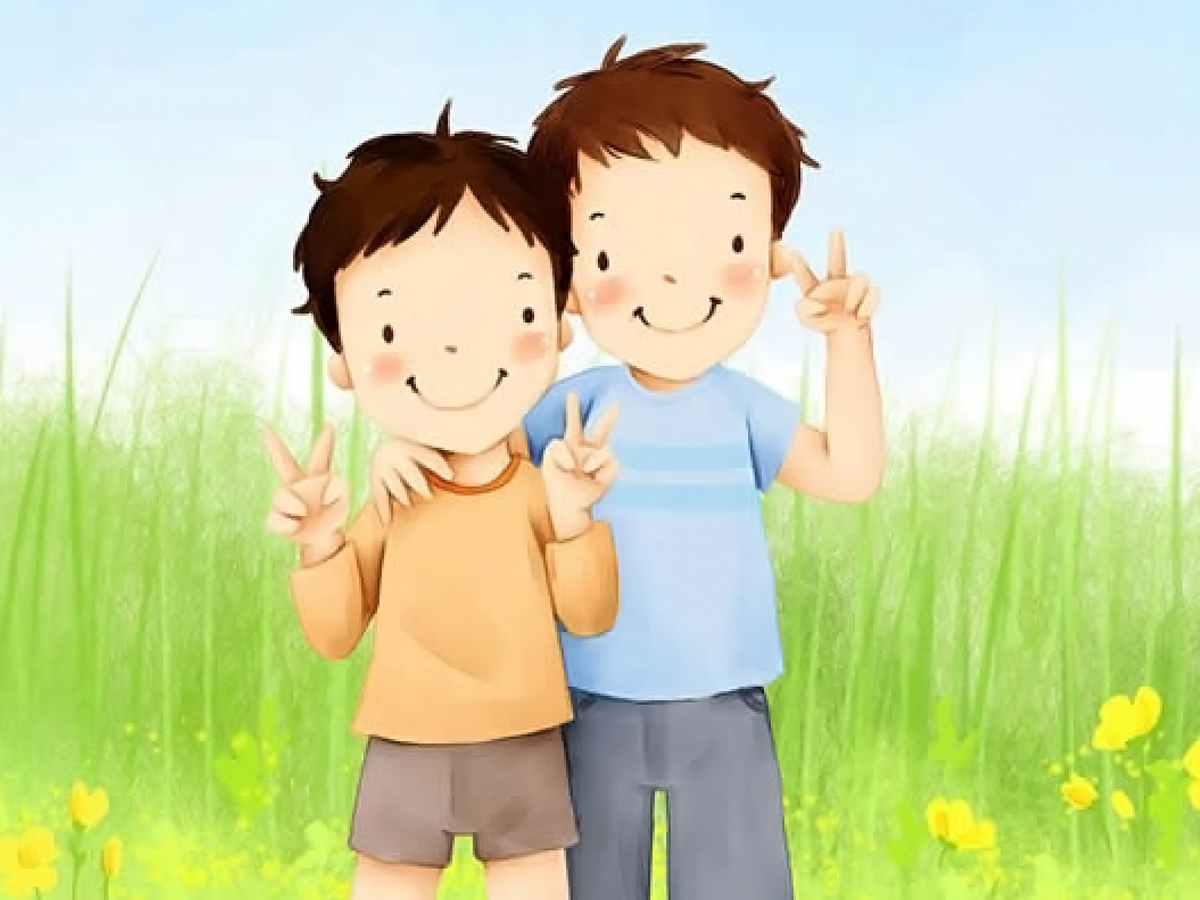 A myth tells us that two friends were wandering in the desert. They had a disagreement at some stage of the trip, and one friend slapped the other in the face.

The one who was slapped was injured but wrote in the sand without saying anything;

My best friend punched me in the chest today.’

Before they reached an oasis where they wanted to take a bath, they kept going. The man who had been slapped got trapped in the mire and began to drown, but he was rescued by a neighbor. He wrote on a stone after suffering from a near-drowning;

He was asked by the friend who had slapped and rescued his best friend.

You wrote in the sand after I hurt you, and now you’re writing on a wall. Why?”

The other friend replied,

If anyone hurts us, we can write it down in the sand to be erased by the winds of forgiveness. When someone does a kind thing for us, we have to engrave it in cement, where no breeze will ever remove it.

Don’t value the things of your life that you have. Yet respect who you have in your life. 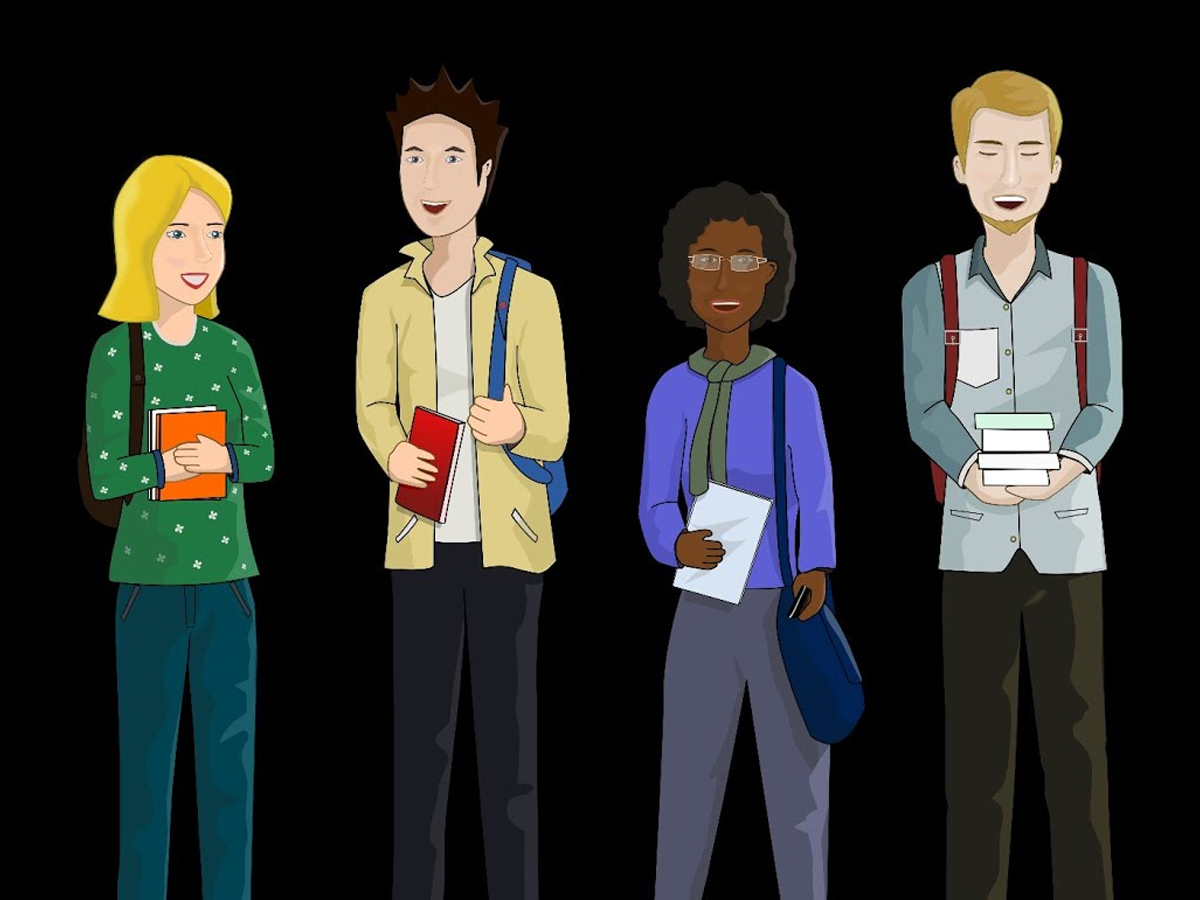 One weekend, four college students were out drinking late at night and did not prep for the next day’s exam. They thought of a plan in the morning.

Of grease and ashes, they made themselves look filthy.

And they went to the Dean and said that last night they had gone out to a wedding and the tire of their car had exploded on their way back, and they had to drive the car all the way around. So they were in no state for the exam to be performed.

The Dean deemed for a minute and said that after 3 days, they should have the re-test. They praised him and said that by that time, they would be set.

They came before the Dean on the third day. As this was a Special Condition Examination, the Dean said, all four were expected to sit for the test in different classrooms. As they had trained well in the last 3 days, they all decided.

The test consisted of just 2 questions with 100 points in total:

1) Name of yourself? 2) Which tire was bursting?

The moral of the tale:

Take accountability, or your lesson cannot be learned. 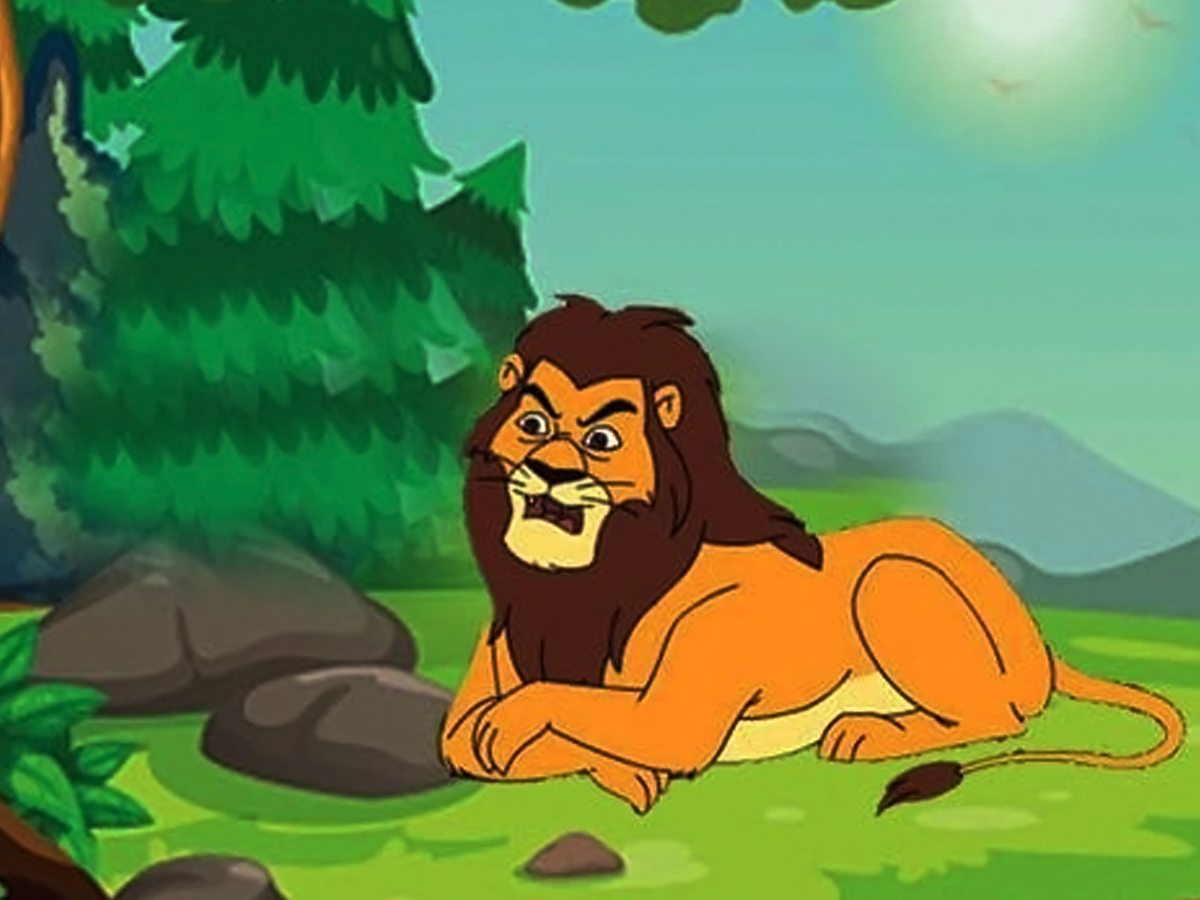 It was a sweltering day, and the lion felt very hungry.

He stepped out of his den, looking here and there.

He could only have found a little hare.

With some reluctance, he caught the hare. “This hare cannot fill my belly,” the lion said. A deer fled that direction as the lion was about to kill a hare. The lion was becoming arrogant.

He’s been thinking, “Let me eat the great deer instead of eating this little hare.” He let go of the hare, and he stepped behind the deer.

But the deer fled into the trees.

Now the lion feels guilty to have let the hare go.

The morals of the tale:

In the bush, the bird in his side is worth two. 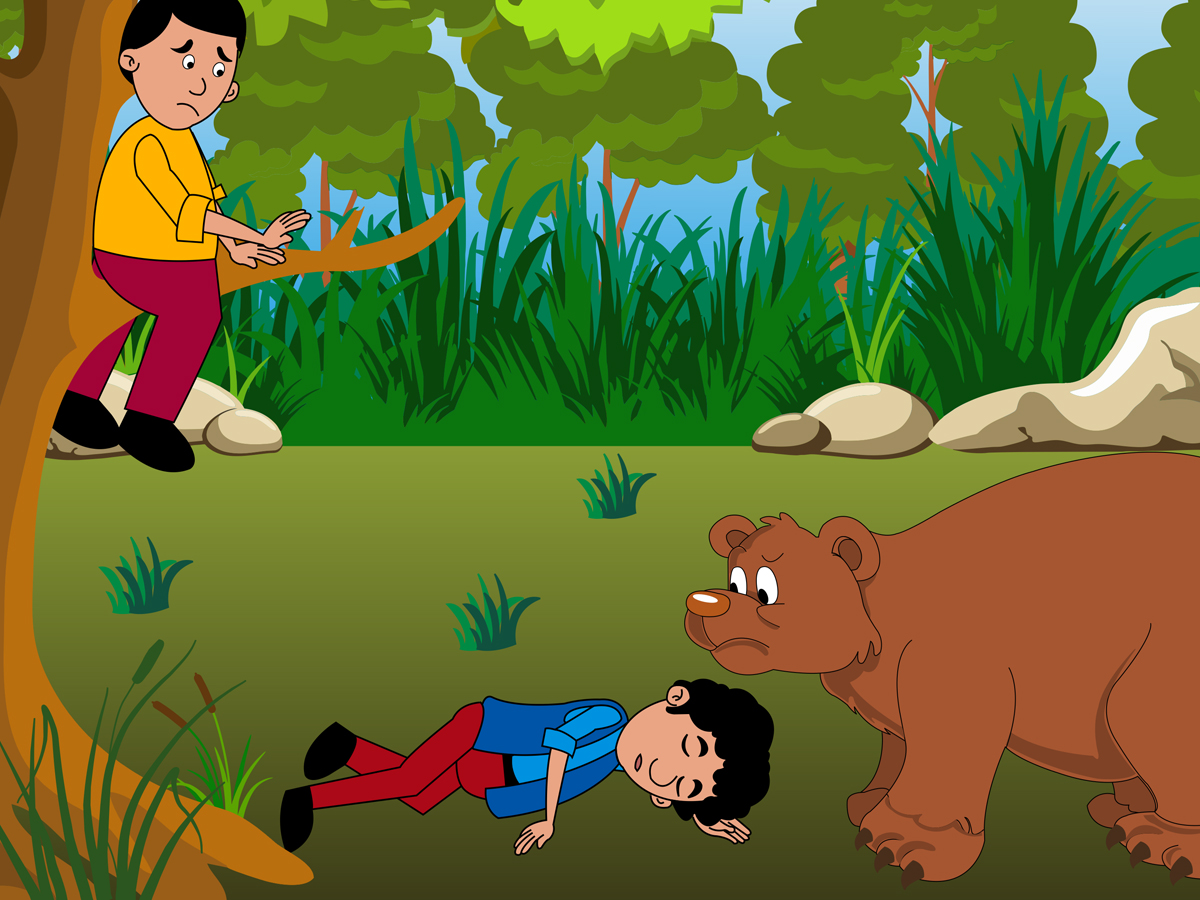 Raju and Vijay became friends. They went on a holiday to stroll through the park, loving the beauty of nature. They immediately saw a bear coming towards them. They were afraid.

Raju, who knew all about climbing trees, raced up to a tree and quickly climbed up. He hadn’t dreamed about Vijay. Vijay didn’t know how to climb up the trunk.

For a second, Vijay thought. He had learned that animals do not like dead bodies, so he collapsed to the ground, holding his breath. Sniffing him, the bear thought he was gone. So, on its way, it went.

What did you whisper in your ears about the bear?”

“The bear asked me to stay away from friends like you,” Vijay replied……and went on his way.

A buddy in need is always a friend. 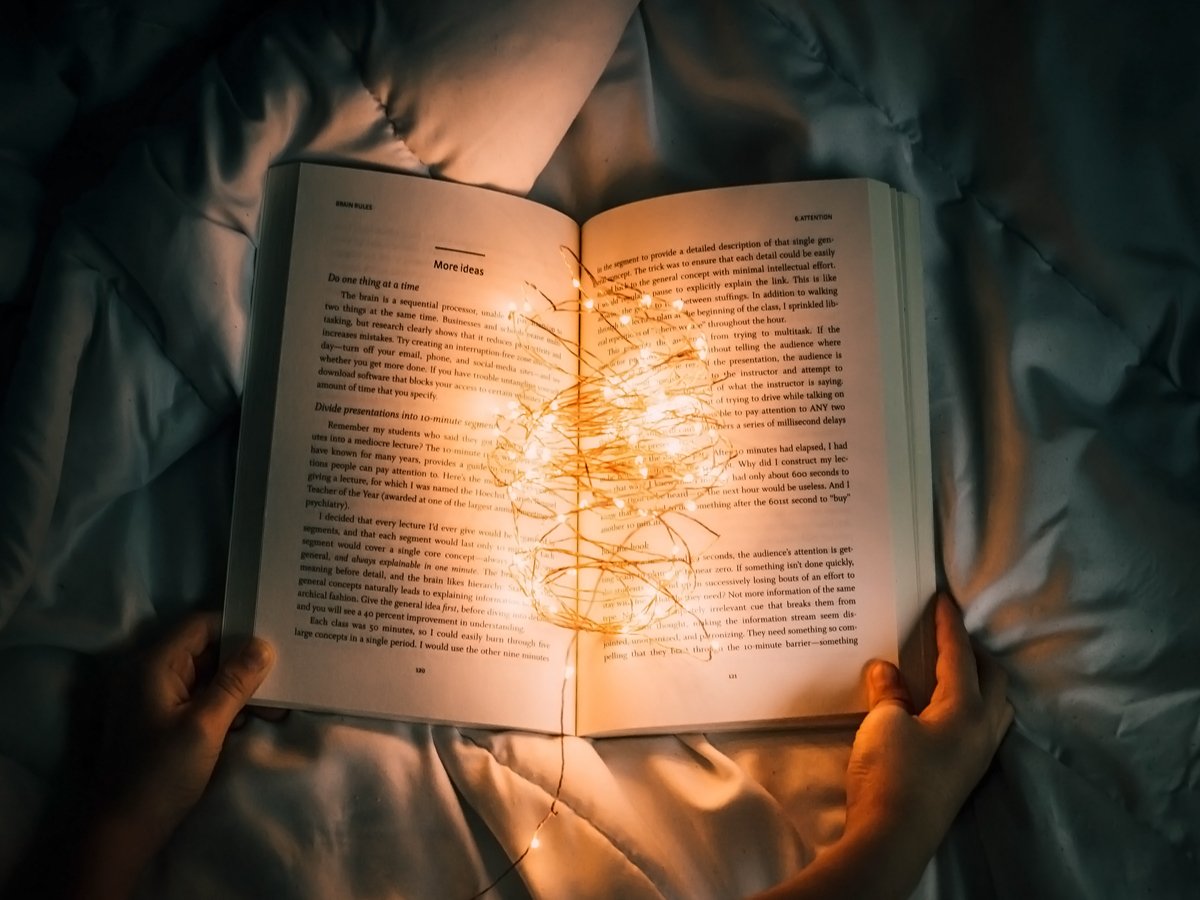 A daughter once lamented to her father that her life was boring, and she did not know how to make it happen.

The entire time, she was tired of battling and failing. Just when one issue was solved, it appeared, another one quickly followed.

She was taken to the kitchen by her dad, a chef. Three pots of water were filled, and he set each one on a high fire.

He placed the potatoes in one pot, the eggs in the second pot, and the ground coffee beans in the third pot as the three pots started to boil. Then he let them sit and simmer, without giving his daughter a word.

The daughter, crying and waiting impatiently, asked what he was doing. He switched the burners off after twenty minutes.

He got his potatoes out of the pot and placed them in a tub. He took out the eggs and put them in a cup. Then he ladled out coffee and poured it in a cup.

As he asked, turning to her. “What do you see, daughter?”

“He said, “Look a little closer, and touch the potatoes.” She did, noting that they were soft.”

Then he asked her to take and crack an egg. She found the hard-boiled egg after taking it off the shell.

He asked her, eventually, to taste the coffee. It brought a smile to her face with its rich fragrance.

What does this imply, Father? “Asked her.

He then stated that the same adversity had been met by the peas, the eggs and coffee beans, the boiling water. Each one responded differently, though. The potato was reliable, challenging, and unyielding, but it became soft and frail in boiling water.

The egg was delicate, its liquid interior covered by the thin outer shell until it was placed in the boiling water. Then it became rough inside the body.

The ground coffee beans were remarkable, however. They modified the water after being introduced to the boiling water and developed something different.

“Which one are you?” his daughter asked him.

“How do you react when adversity knocks on your door? Are you a potato, an egg, or a coffee bean?”

Stuff happens around us in life, things happen to us, but the only thing that really matters is how you want to respond to it and what you make out of it. Life is all about relying upon, accepting, and making all the challenges into something good that we witness.

The Grapes & The Fox 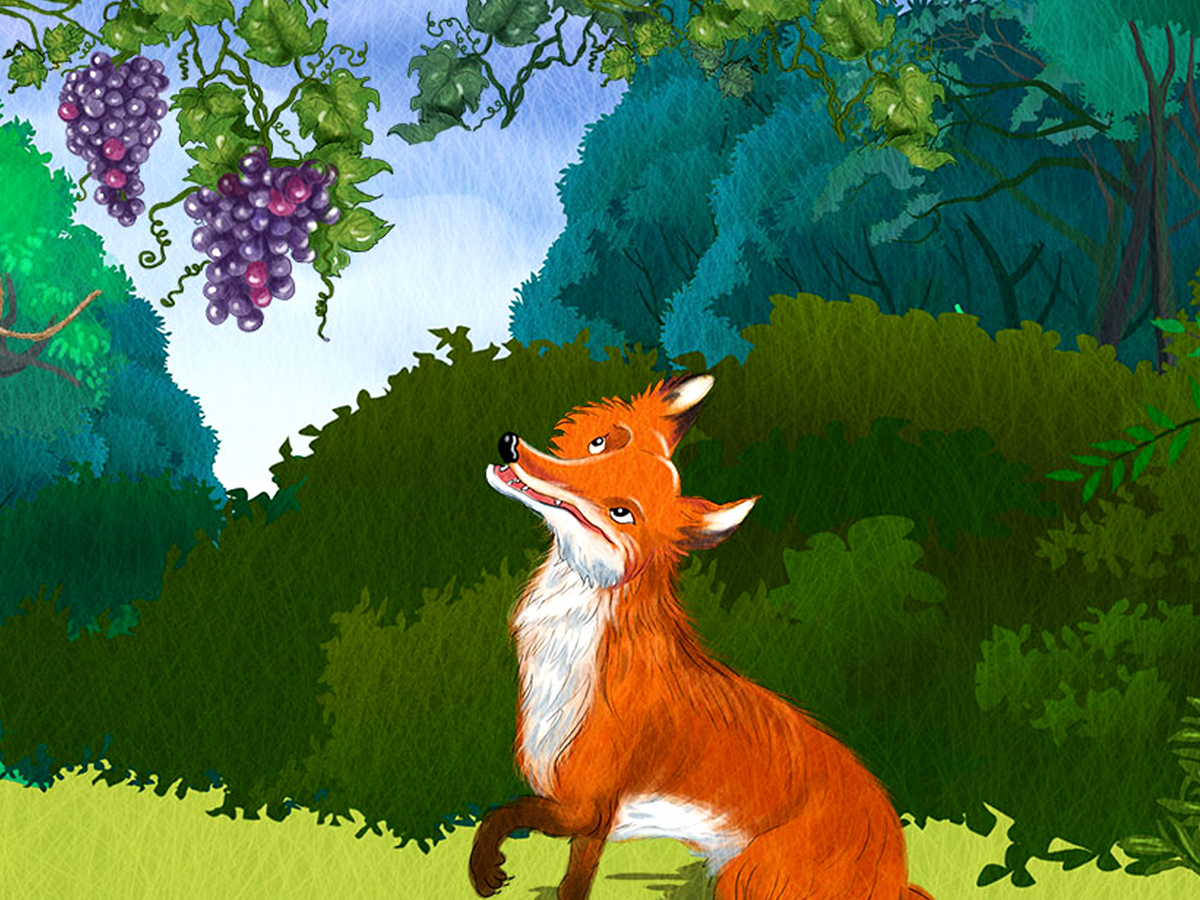 One afternoon, a fox crossed through the forest and found many grapes dangling over an ornamental vine.

He thought, “Just the thing to quench my thirst.”

The fox jumped and narrowly missing the hanging grapes, taking a couple of steps back. The fox took a few steps back again and attempted to catch them, but it still failed.

Finally, giving up, the fox turned his nose and muttered, “Anyway, they’re probably sour,” and walked away.

What you can’t get is easy to hate.

The Miserable Slave & The Lion

A slave runs away to the jungle, ill-treated by his owner. There, because of a thorn in his hand, he comes across a lion in agony. The slave goes in bravely and softly removes the thorn.

The lion runs away without injuring him.

Any days later, the owner of the slave comes to the forest hunting and captures many animals and cages them. The slave is spotted by the lord’s men, who capture him and lead him to the ruthless owner.

The owner demands that the slave be tossed into the cage of the lion.

When he discovers that he had helped the same lion, the slave is facing his death in the enclosure. The slave saved the lion and all the other creatures that had been caged.

We get the benefits of our helpful deeds in return. One should help those in need.

Jaadugar: Gully football, the real show stopper of the film