Home Arts & Entertainment Film Venom Let there Be Carnage: A Rollercoaster of Gory 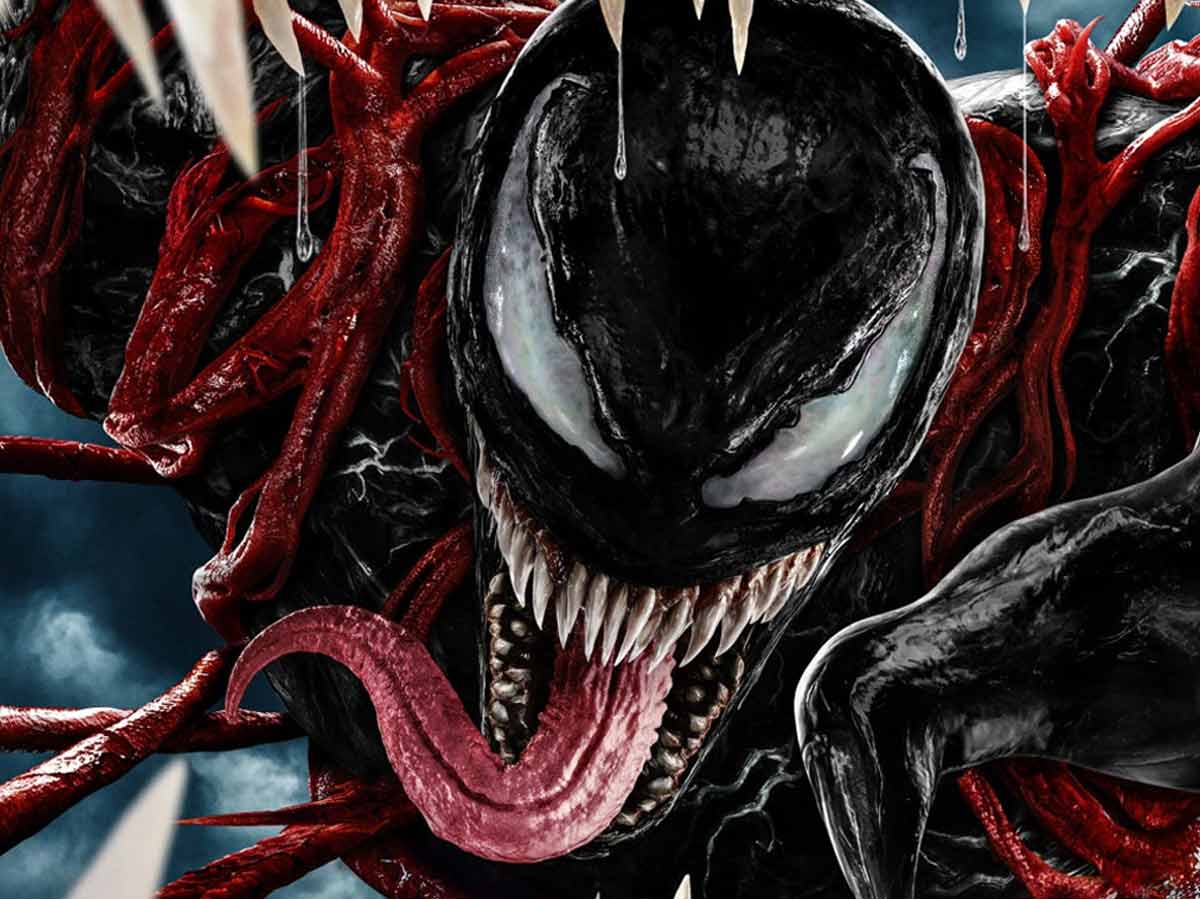 Instead, Venom Let There Be Carnage should have settled for more Tom Hardy ham.

When I was in school, grading on a curve always caused me to feel conflicted. If I didn’t know the topic as well as I should have, the stay of execution from a grade card hangman might be a lifesaver. When I realized what I was doing, though, the bell curve was a scourge, pulling entire classes down with it. While seeing Venom Let There Be Carnage, a same nagging quandary arises: Is displaying the most progress in the franchise’s brief existence the same as not failing?

Tom Hardy savors Venom Let There Be Carnage with uncontrollable delight. The Venom sequel creates a comic superstar out of goo.

The superhero genre does not suit Venom. Yes, the Marvel Comics symbiote is an extraterrestrial goo that gives abilities on its human host, but its least intriguing role is as a deadly guardian. Venom was popular because he was a darker version of Spider-Man, and changing him from villain to vigilante dampened his attitude and attractiveness in the late 1990s.

On the page, the character has evolved from alien-powered super soldier to space knight to cosmic god, separating himself from his beginnings as the huge black-and-white Spidey with sharp fangs and a spit-slinging tongue.

Nothing, however, has moved Venom as far away from his roots as the current film version, which completely ignores Spider-Man and uses the symbiote/host relationship as a source of comedy. In 2018’s Venom, an extraterrestrial, tormented a greedy, opportunistic jerk by taking over his mind and body. In the sequel, the duo must learn to live with each other without killing each other. Venom Let There Be Carnage excels when it departs from super-heroics and delves into romantic comedy and body horror, showing the challenges of living with a lover who craves human flesh.

Eddie’s symbiote friend has helped him become a better investigative reporter after the events of the first Venom. Venom examines the surroundings for clues and memorizes the artwork on Kasady’s cell walls when Eddie interviews him on death row. Later, Venom recreates what he witnessed in the jail by whirling Eddie’s body about his flat, collecting sketching supplies that Eddie devours at breakneck speed. With the frenetic intensity of a clown performance, Serkis controls the scenario. And the more outlandish, the better. In one scene, Venom prepares breakfast for Eddie while singing “Let’s Call The Whole Thing Off,” a wonderfully ridiculous routine that emphasizes how these characters work outside of the conventional superhero paradigm.

Venom was an unexpected box office success, drawing in crowds from all around the world to see one of Marvel’s most beloved anti-heroes come to life. While 2018’s Venom wasn’t the finest superhero picture of the year, it was one of the more memorable, owing to Tom Hardy’s quirky and lovable lead performance. Fortunately, Venom Let There Be Carnage, the film’s sequel, combines Hardy’s quirky rhythms to land a weird and original superhero movie.

The events of Venom Let There Be Carnage take place roughly a year after the events of the previous film. Eddie Brock (Tom Hardy) is adapting to his new life, which includes unexpected popularity for his coverage of serial killer Cletus Kasady (Woody Harrelson), which enrages the serial killer when he exposes details about his most recent victims. Eddie’s personal life is a disaster. His ex-fiancee Anne (Michelle Williams) has recently married Dan (Reid Scott), and Brock’s symbiote is becoming restless, which couldn’t come at a worse time. Kasady gets introduced to a portion of the symbiote and ingests it, transforming him into Carnage and giving him the opportunity to save his super-powered lover/fellow killer, Frances (Naomie Harris)

Even throughout the film’s heightened tensions, Venom Let There Be Carnage is a roller coaster that never stops cracking jokes and delivering crazy humor. Venom’s most memorable scene was its weird second act, which director Andy Serkis embraces from the start in Venom Let there be Carnage. Eddie Brock is a charmingly odd sad sack. His squabbles with the symbiote are equal parts petty, poignant, and ridiculous. Hardy, who also acts as an Executive Producer and has a “Story By” credit in the film alongside writer Kelly Marcel, completely immerses himself in the role of the silly protagonist. Eddie is firmly established as Marvel’s Charlie Brown in Venom Let there be Carnage.

Eddie and Venom’s relationship has progressed to where Venom isn’t embarrassing his host with massively antisocial behavior, which is disappointing; ultimately, Venom Let There Be Carnage never reaches the cringe-comedy high of the original Venom’s fish tank sequence. Eddie has the rare Venom-fueled public outburst, but Venom’s berating and demeaning of the reporter is more amusing. The Little Shop of Horror vibes are still strong, and the source of Eddie’s success is also his biggest pain since it’s so hungry for brains. Venom wants those huge meaty human cerebra, not the tiny popcorn chicken brains, and it doesn’t have much time for Eddie’s concerns about murder.

Venom Let There Be Carnage, at 97 minutes, avoids the sluggish middle portion that plagues so many action-packed superhero films. In reality, the second act is where Venom shines as a character. He’s tired of living in a host who doesn’t appreciate what he does for him and won’t let him eat the criminals he apprehends, so he takes his talents somewhere. Venom sinks his claws into the side of Eddie’s lovely little souped-up two-wheel drive and explores the city on his own, leaping from body to body and probably killing each new host along the way, full of self-righteous rage.

Venom ultimately ends up to a rave, where he postures himself as a champion of alien acceptance and free love. This scene, which features rapper Little Simz (who recently released an excellent new album, sometimes I am an introvert), has been dubbed Venom’s “coming out” moment. While it is a significant stretch, it accomplishes the heavy job of establishing who Venom is in the absence of Eddie in an unexpected and funny setting.

Also Read, Shang-Chi and the Legend of the Ten Rings: Something What MCU Needs…

The link between Venom and Eddie is no replacement for the type of true gay representation that superhero movies usually lack, and Sony Pictures don’t earn credit for a queer-coded friendship between a male human and a symbiotic blob spoken by the same actor. Their connection adds an intriguing romantic undertone to the tale, which is frequently played for laughs but also has true emotional implications.

Michelle Williams’ iconic line reading of “I’m sorry about Venom” was one of the funniest moments in the original Venom, but that brief acknowledgement of Venom’s importance in her ex-life boyfriend’s drives Anne’s character journey in the sequel. She may have moved on to a new guy (Reid Scott), but she still loves Eddie and is one of the few individuals who understands his strange position. When Anne isn’t chained to a thankless love interest role, which belongs to Naomie Harris, who portrays Kasady’s childhood paramour, Frances Barrison.

Even Venom gets a character development, with the symbiote exploring San Francisco in an odd moment that makes you chuckle. The ensemble of Venom Let There Be Carnage fits the film’s oddity and sense of fun, with Harrelson particularly hamming it up as Kasady. Both Harris and Williams employ strange small rhythms to give their characters edges that a poorer picture would not have. Venom Let there be Carnage is gory, especially when Carnage is released and the utter lunacy of his power-set is on full show, yet it never loses its humor.

The character of Frances is a terrible waste of an Academy Award-nominated performer, and the writing has little interest in moving beyond the most basic cliches about mental illness and love partners in crime. Meanwhile, Harrelson’s Kasady part seems tailor-made for him, an actor who can play over-the-top menacing with a sense of humour, albeit the execution falls short. This isn’t a sophisticated character, but Harrelson doesn’t have much to do other than snarl at the camera and offer cheesy one-liners like “something evil this way coming.” Through his tragic affair with Frances, the film seeks to humanize Kasady, but it does so at the price of Carnage’s terror.

The PG-13 designation also doesn’t help. Venom Let There Be Carnage revolves around a violent extraterrestrial and a serial murderer–a R rating may have made both of them more terrifying. Kasady’s prior crimes are not seen or described in any detail in the film, and when he ultimately gets his own symbiote, the most heinous brutality is inferred. Mature DC films like Birds of Prey and The Suicide Squad have really lifted the standard for superhero brutality in terms of battle choreography and graphic special effects, and if you have a villain like Carnage, you want him to live up to his name.

Venom is a figure steeped in sci-fi horror, yet his most terrifying scene in this film is a close-up view of him fleeing his current dead host, emphasizing the extraterrestrial creature’s stifling viscosity. In a way that the other spectacular visual images aren’t, that moment is physical and scary. The conspicuous use of Red Vines in a gas station scene feels like a sly reference to how the titular symbiotes fight like licorice monsters, and while the symbiote bouts aren’t as murky as the previous film, they still lack a lot of weight.

The flowing symbiote imagery that looks so fantastic in static comic-book art is tough to adapt into real action, but perhaps movies could consider beyond human hosts. The Venom symbiote bonded with a Tyrannosaurus Rex in 2008’s “Old Man Logan” narrative, which inspired the 2017 film Logan. Bringing an ounce of the inventiveness Hardy brings to character work to the infinite possibilities of the franchise’s action scenes would undoubtedly elicit applause from spectators.

Venom Let there be Carnage isn’t necessarily the finest film ever made. Serkis’ irrational fantasies can lead to certain discrepancies in Venom’s range. Unlike Carnage, Venom’s enigmatic powers make him fairly tedious to watch in battle. While the deliberately over-the-top banter might be entertaining during action moments, it primarily serves as a showcase for weightless CGI. It’s a straightforward narrative with little actual surprise. Venom Let There Be Carnage is a gained taste: if basic superhero stories with a gonzo sense of humour don’t appeal to you, this one might not be for you.

While Venom suffered from a tonal mismatch between its strange but unforgettable second act and the rest of the humdrum film that surrounded it, Venom Let There Be Carnage is firmly and boldly violent, hilarious, and over-the-top. Fortunately, everyone involved appears to be aware of the type of film they’re creating and throws themselves into it wholeheartedly. It succeeds considerably more than Venom, and the overall result is more than entertaining enough to justify a viewing.