Home Arts & Entertainment Film What if…? Season 1 Explained, and The Future of What…? 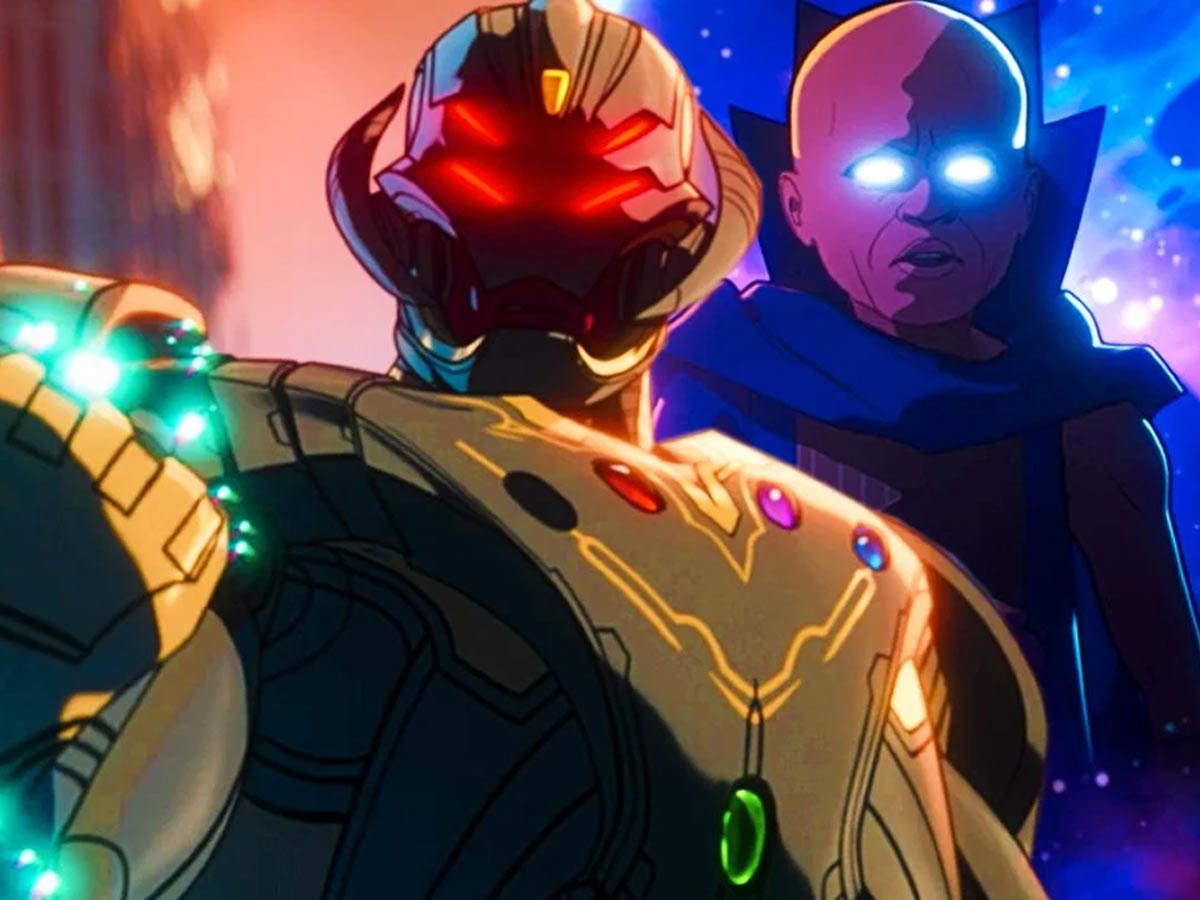 The season conclusion of What If…? saw the Watcher gather the Guardians of the Multiverse, establishing him as a prominent player in the MCU going forward.

The Watcher was turned into the “Protector of the Multiverse” at the end of Marvel’s What If…? season 1. What If…?, the MCU’s first animated TV series, was an examination of the Multiverse introduced in Loki. Season 1 of What If…? used an anthology approach, with each episode set in a different timeline, one where reality had taken a little fresh course – some more odd than others, some in apocalyptic form, some with obvious “happy endings.”

The latter few episodes took a different strategy, unleashing an unstoppable Ultron over the Multiverse. Even the Watcher could not destroy Ultron, so he picked champions to fight in his place, heroes and villains who could band together and vanquish the synthezoid life-form. He gave them all they needed to know, the consummate chess genius whose knowledge outstripped Ultron’s and allowed the Guardians of the Multiverse to prevail – although unexpectedly.

Of course, because every MCU TV program operates inside a shared world, the story it tells is essential not just, but it also acts as a setup for the future. Here’s how the Watcher outwitted Ultron, how the heroes of What If…? season 1 were changed by the experience, and how it will impact the MCU in the future.

The Guardians of Multiverse Explained

The Watcher scoured endless timelines for champions he felt could vanquish Ultron. They were the Multiverse Guardians, guarding all of reality from Ultron’s armies. They had the following members:

Doctor Strange Supreme, a warped version of Stephen Strange who destroyed his own reality to save the lady he loved. Strange functioned as the Watcher’s right-hand man, his powers boosted by all the mystical energy he had absorbed, allowing him to withstand even Ultron’s strength.

T’Challa, the charismatic warrior who had even redeemed Thanos from his reality, was snatched from his timeline midway through his confrontation with Ego on Earth.

Captain Carter, the living legend of World War II from a timeline in which Peggy Carter became a super-soldier rather than Steve Rogers, was plucked from her reality on a mission to the Lemurian Star – her equivalent of the events in Captain America: The Winter Soldier.

Gamora, champion of Sakaar, who apparently came from a universe in which she was never adopted by Thanos and was instead abandoned on Sakaar. In another version, she had Eitri create the Infinity Crusher, a device capable of destroying the Infinity Stones, and she murdered Thanos.

Killmonger, ruler of Wakanda and Tony Stark’s betrayer, was ironically picked because he would make the unethical actions at the time – and give a perfect means to remove the Infinity Stones from the equation.

The only person on Ultron’s Earth, Black Widow, is armed with a computer virus that will allow her to eliminate him. She was a kind of hidden recruit, started into the squad as events unfolded rather than from the start.

They’re a diverse group that was hand-picked to meet the Watcher’s standards. Interestingly, dialogue implies that the Watcher chose them in collaboration with Doctor Strange Supreme, after revealing that he’d studied information on heroes like Captain Carter.

What Happens Next After the Guardians of the Multiverse Disband?

The Guardians of the Multiverse dissolved and returned to their home dimensions, although the Watcher permitted them to preserve memories of these Multiversal occurrences, perhaps allowing him to call on them again.

In each scenario, What If…? episode 9 took a minute to reassure viewers they’d returned to a timeline where things were going normally, with the promise of more heroism and adventure to come. Party Thor was reunited with Jane Foster, who had apparently survived the Ultron invasion; Star-Lord T’Challa joined forces with Peter Quill to fight Ego, and because they were fighting on Earth rather than the Celestial planet itself, Ego’s power should have been limited enough to defeat him in that timeline.

Only one of the main futures was not revisited, the one in which Killmonger took over Wakanda, because his destiny meant he was essentially wiped, therefore freeing Wakanda. It is plausible to suppose he was going to lose in this reality, and the Watcher had removed him at a point where his absence would create the least amount of disturbance.

Because of the real-world consequences, the conclusion of What If…? episode 9 is bittersweet. Chadwick Boseman died shortly after finishing his recordings for What If…?, and this is his last appearance in the MCU. Marvel has decided not to recast T’Challa for the live-action MCU, but it remains to be seen whether another voice-actor will be cast in What If…? season 2.

The Ending and Future of Doctor Strange Supreme

Doctor Strange Supreme returns to his own reality, now in charge of Ultron and Killmonger’s pocket dimension. He accepts this duty, knowing that by doing so, he is safeguarding the whole multiverse from two potentially devastating dangers. What Would Happen If…? Strange and the Watcher consider each other as friends at the end of episode 9, and it’s apparent that the Watcher plans to see Strange Supreme.

The narrative has effectively rehabilitated its darkest, most sad person and elevated him to the position of Multiverse protector. That, of course, begs whether Doctor Strange Supreme will return in live-action form in Doctor Strange in the Multiverse of Madness, as has been speculated for quite some time; there has been no official word, but it can’t be ruled out.

It’d be fascinating to see Strange Supreme engage with a variant of himself who, he’d discover, is rather more ambivalent about his adored Night Nurse/Christine Palmer than he is; the story potential there is incredible, but it all depends on how intertwined Marvel wants What If…? to be with the main MCU.

The Watcher Has become The Multiverse’s Defender

Jeffrey Wright, who plays the Watcher, has always hinted that his character will change throughout the course of What If…? season 1. “In the comics, he’s an observer—plus some,” Wright added. “In the first season, he begins as an observer but progressively becomes increasingly driven by what he sees.” He suggested that What If…Watcher ?’s might intervene, which was realized when the Watcher was turned into a being eager to intervene when he believes it was essential.

What If…? Episode 9 confirms that this is not a passing phase in the Watcher’s conduct, but a new status quo. The Watcher is no longer only a multiverse watcher; he now fancies himself the Multiverse’s Protector. The Multiverse is crucial to the MCU’s Phase 4 and beyond, with Loki establishing Kang the Conqueror as its most dangerous enemy. As revealed in Loki, Kang, the Conqueror versions are doomed to fight war across realities, and the only way to prevail is to establish a single timeline and eliminate all others.

What If…? Season 1 establishes the Watcher as Kang’s real enemy, a cosmic creature that exists beyond of time and space and so has the potential to equal him.

Scripts for What If…? season 2 have already been completed, and showrunner A. C. Bradley has suggested it’s a difficult balancing act; while she wants to revisit certain characters, the MCU’s ever-growing nature means there are so many more potential stories to tell, and What If…? season 2 will have Phase 4 influences.

While the Guardians of the Multiverse will certainly return, their lineup may be changed, with the Watcher selecting whatever squad he believes is appropriate for the Multiversal dangers of What If…? season 2.

Also read, Every Episode of What if…? Ranked

The What if…? Episode 9 Ending Explained…

Captain Carter is introduced in What If…? episode 1, which depicts a reality in which Peggy Carter, rather than Steve Rogers, receives the first super soldier serum. In that timeline, Steve dons an Iron Man-style mech armor dubbed the Hydra Stomper to aid Peggy in her fight against the evil guys. Captain Carter, like in the original Captain America film, is taken from her time after defeating Hydra and transported to the current day, where she joins SHIELD and continues her heroic endeavors across the world.

Captain Carter asks if she may return to her native time period and be with Steve after assisting the Watcher in defeating Ultron as part of the Guardians of the Multiverse. However, the Watcher refuses her plea. Instead, he returns her to the ship at the opening of Captain America: The Winter Soldier, where she began the What If…? season 1 finale. However, after taking out the terrorists aboard the Black Widow, Peggy finds Steve may still be alive.

What If…? The Post-Credits Scene in Episode 9 Is Explained: Ending of Peggy’s Endgame

Though the Watcher does not send Captain Carter back to World War II, he must have known what awaited her in her present-day timeline — an implicit reunion with Steve. Natasha shows to Peggy that the terrorists aboard the ship were seeking a durable piece of cargo — a metal container containing the original Hydra Stomper suit, which, according to Black Widow, still has someone inside. The obvious inference is that Steve is still alive and well, allowing Captain Carter to have a different ending to Avengers: Endgame by reconciling with her love in the current day.

The What If…? episode 9 finale suggests a darker twist — that in Captain Carter’s reality, Steve became the Winter Soldier.

However, what if…? Although episode 9 does not explicitly state that Steve is the Winter Soldier, it is strongly inferred. The situation is reminiscent of the second Captain America film, which was largely about Bucky Barnes’ decades of agony and domination as the Winter Soldier. It is doubtful that Steve and the Hydra Stomper would have continued to operate without SHIELD’s knowledge, unless he was being influenced by a darker, more secret force.

And, given that Hydra is likely still operating in Captain Carter’s reality, as it was in the MCU’s Sacred Timeline, they might easily be behind Steve’s return.

What a Steve Rogers Winter Soldier might look like is less obvious. Because the Hydra Stomper is still in use, it’s doubtful that Steve was changed, as Bucky was. If the change had been completed, the Hydra Stomper would have been obsolete and better suited to a less powerful operative. But why would Steve have been kept around if he hadn’t been enhanced with super soldier serum?

In theory, anybody could learn to operate the Hydra Stomper, and if it fell into the wrong hands, it would have been far easier to train someone on the dark side to use it than it would have been to force Steve. There are several unanswered questions surrounding Steve’s apparent What If…? comeback, and they may be resolved in What If…? season 2.

What Is the Finale Credits Scene in What If…? Future of Season 2 a large chunk of Marvel’s What If…? season 2 will feature totally new worlds and variations of characters, including those from MCU Phase 4. However, the conclusion of What If…? season 1 leaves strong clues that some of the show’s characters may be revisited.

The most apparent one to return to is Captain Carter, especially given the setting in the What If…? episode 9 post-credits sequence. Will the show’s upcoming season, however, really disclose the truth about Steve Rogers’ ostensible Winter Soldier metamorphosis, or is it simply a tease?

Captain Carter was one of the most popular characters in What If…? season 1, thus revisiting her in season 2 would make sense. Because she now knows Hydra survived World War II because of her multiverse adventure with Black Widow, she might theoretically prevent the terrible events of Captain America: The Winter Soldier from ever occurring in her world.