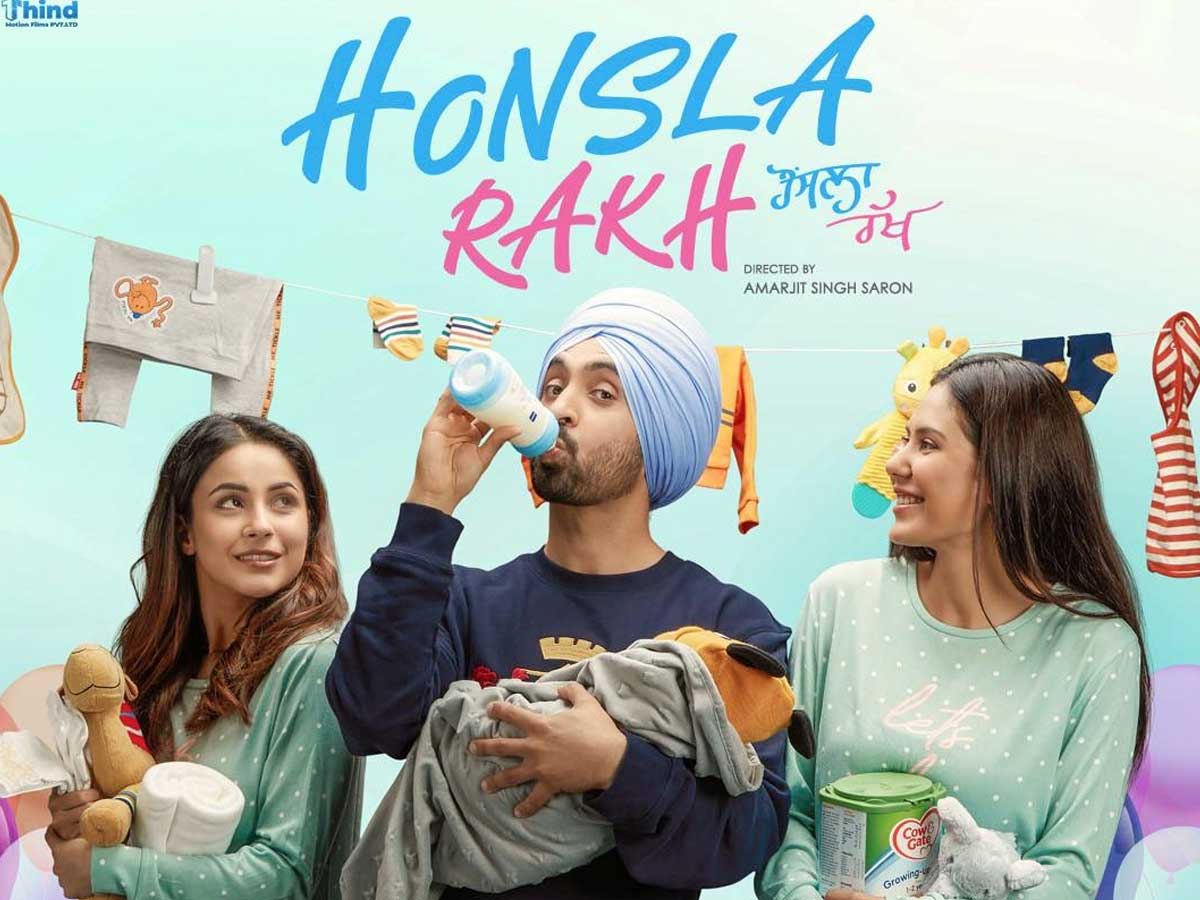 One of the most awaited Punjabi Movies of the year, 2021 Honsla Rakh, finally got released recently. This romantic comedy had already set its bar high because of its amazing cast of versatile actor and singer Diljit Dosanjh, very stunning and beautiful Shehnaaz Gill, and gorgeous Sonam Bajwa. The movie was also a hope for the fans of very famous Shehnaaz Gill because she made her comeback with this movie in the industry after a really long break due to his close friend’s sudden demise.

Moreover, the very talented Diljit Dosanjh with this movie has made his debut in the producing department. The movie has been set in Canada and portrays the story of a divorced father who raised his son all alone by himself. The songs and the trailer of the movie had already created high expectations in fans, but has the movie fulfilled those high expectations or not, let’s find out!

The movie, Honsla Rakh, with its release, brought a new wave of hope and happiness among the fans, especially the fans of Shehnaaz Gill. So many people took their social media handles to praise the movie and the actor’s performance in the movie. As per the review of fans, Honsla Rakh proved to be a perfect combination of comedy and emotions and called it a perfect outing during the festive time as the movie was released on Dusherra of this year.

However, the movie, Honsla Rakh, indeed has a perfectly cute plot designed with two charming girls, a talented star, and a very cute, adorable child. The script of the movie delivers perfect and expected fun to its audience. The whole movie has been directed in a typical format that makes the setting of the movie very clear and understandable. The movie begins with a song and the introduction of the premise and the critical characters.

Gradually the current and the past story of a single father, Yankee Singh, played by Diljit Singh, and his son Honsla, played by Shinda Grewal, gets revealed, who announced his divorce from his wife Sweety, played by Shehnaaz Gill.

The opening of the movie has back-to-back funny sequences and the movie gradually starts to become intense. The script of the movie changes when Jasmine, played by Sonam Bajwa, takes a good shot with her signature presence. Besides the fact that the movie was very predictable because of its songs, the movie did a great job because of its good storytelling, well-written dialogues, and highly entertaining performances of the actors.

The last 30 minutes of Honsla Rakh ended so happily. However, the fans of Sonam will miss her in the first half of the movie and the same is applicable for the fans of Shehnaaz as she also disappears before the climax of the movie. But the director manages well to maintain the balance between the two stunning beauties. However, the movie may not appear as a whole new experience for the audience, but it does offer great engaging content to its audience. And the movie knew its targeted audience and hence is well presented.

The movie is a fun family film that is well capable of entertaining the whole family. The film perfectly balances its drama with plenty of laugh-out-moments to keep the humor intact. Also, in the movie, fun never takes the backseat. It will make you laugh your gut out. Moreover, the story of the plot never drifts apart.

The film does not convey any message or moral, but only entertainment and a lot of drama. Besides everything, the film suggests the relationship dynamics of the couples. The best part of Honsla Rakh is that it does not focus on the seriousness of the relationship between the father and the son but encourages friendliness and a lot of independence in their bond.

With the full-on entertainment, the movie also throws light upon the little efforts that a single dad puts into the well-being of his son. Overall, nothing lets us down neither the plot nor the actors. Each and every cast of the movie has given their best. But Shehnaaz definitely deserves better than Honsla Rakh and better screen time in the movie too. There is nothing much to write about Honsla Rakh, as it is simply a perfect fun family movie to watch with the whole family together for entertainment. The movie is basically entertainment, entertainment, and entertainment!