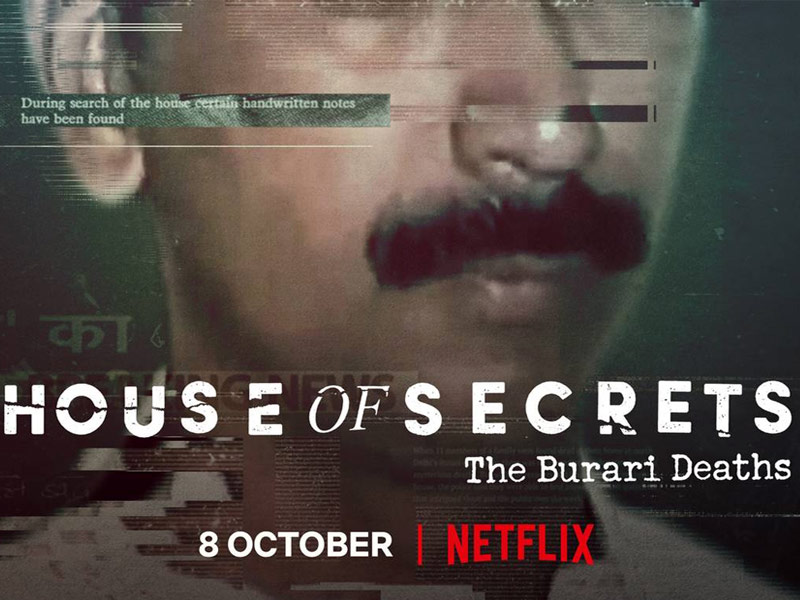 Inspired by the real incident of 30th June 2018, termed as Burari deaths by media House of Secrets, is a must-watch. Everybody woke up with this shocking and saddening news of 11 members of a family, from teen to grandmother. Everybody was found hanging in an open portion of their house. The movie explores the theories of the demise of 11 members of the same family that took place on June 20 in the year 2018.

It is a perfect docu series to give a watch on Netflix. Created by Leena Yadav and Anubhav Chopra, House of Secrets is receiving a significant amount of love. The series got released on October 8th, 2021, and is gaining immense popularity among netizens. It is a perfect series to give a watch and get acquainted with what actually happened on June 20, 2018. Let’s know a little more about these amazing docuseries.

CAST OF THE HOUSE OF SECRETS

The cast of the series, House of Secrets, involves relatives and friends of the Chundavat family, their neighbors, media reporters, eyewitnesses, and police personnel who were present at the house of the family. Also, it stars Dinesh Chaturvedi, the only survivor of the tragedy, and the psychologist.

REVIEW OF THE HOUSE OF SECRETS

Leaving behind the exploitative tone that is almost irresistible in the crime docuseries, House of Secrets is an amazing watch. The series, House of Secrets, goes beyond the insight details and addresses the psychological and sociological aspects of the June 30th, 2018 case that was given the name of Burari deaths by the media. Eleven members are found dead and hanging in the living room of their house in north Delhi one summer morning. The three generations of that family were found dead and bodies were discovered by their neighbors, who notice something unusual in their daily routine.

An hour later of this incident, the chief minister of Delhi, Arvind Kejriwal to Rinkiya ke Papa, arrived at the spot of the incident. After getting the information of the incident, thousands of locals flocks over that area. Some of them even climbed the rooftop to get a better glimpse of what actually happened inside the house or to check that whatever is being described by the news anchors is true or not. This was one of the most shocking crimes that happened in India in recent years.

After the Nithari Killing and Arushi double murder case, this crime too became a piece of national news within a day. However, call it a coincidence or the carelessness of officials. All these three cases took place in or around the capital of India, i.e. Delhi. This real incident of Burari actually resembles the crime scene in the series like Patal Lok and Delhi Crime.

The series, House of Secrets, is well-titled and actually deserves an applaud for putting the minute details and facts on the screen with utmost perfection and care. However, it is a little distressing to relive such a case that can completely give you goosebumps and force you to question the very idea of decency.

The access that filmmakers have been granted in House of Secrets is of great admiration. The series has done its best in providing the content by rounding up the next of kin, a bunch of journalists and whichever cop is ready to talk openly about the case and called it a day. But the series also involves a handful of psychologists to add a key perspective of what is usually missing in the programs such as this.

The whole Burari death case was presented as ‘only bizarre’ by the media. Some say by a clinical hypnotherapist in a show, but despite doing exactly what for the two entire episodes, the series reveals it is something more worthwhile. The series is a kind of rewarding in its last episode.

The series, House of Secrets has got every possible scandalous detail of the case of Burari suicide, the creatives of the series, Leena Yadav and Anubhav Chopra focuses more on the involvement of neighbors, the investigators, the friends, and all the people who have been the part of this tragedy some or the other way and those who have left with the emotional scars of this tragedy that will probably never heal.

The two of the cops go on telling the story of the incident but were not actually involved in the case’s investigation. At the end of the series, a family friend is seen asking out a question “Is there a God?” loudly. This shows the director’s great approach towards the creativity to end with a show on such a potential proactive note. House of Secrets is a great approach to investigate the crime that happened in June 2018, however it is now a closed case. The series tried it so well to cover up so many aspects of this case. The entire case has been summarised neatly in the series. This series is a good option to give a watch.