Home Arts & Entertainment Film Thar Movie Review : Is this film set in the 1980s destined for... 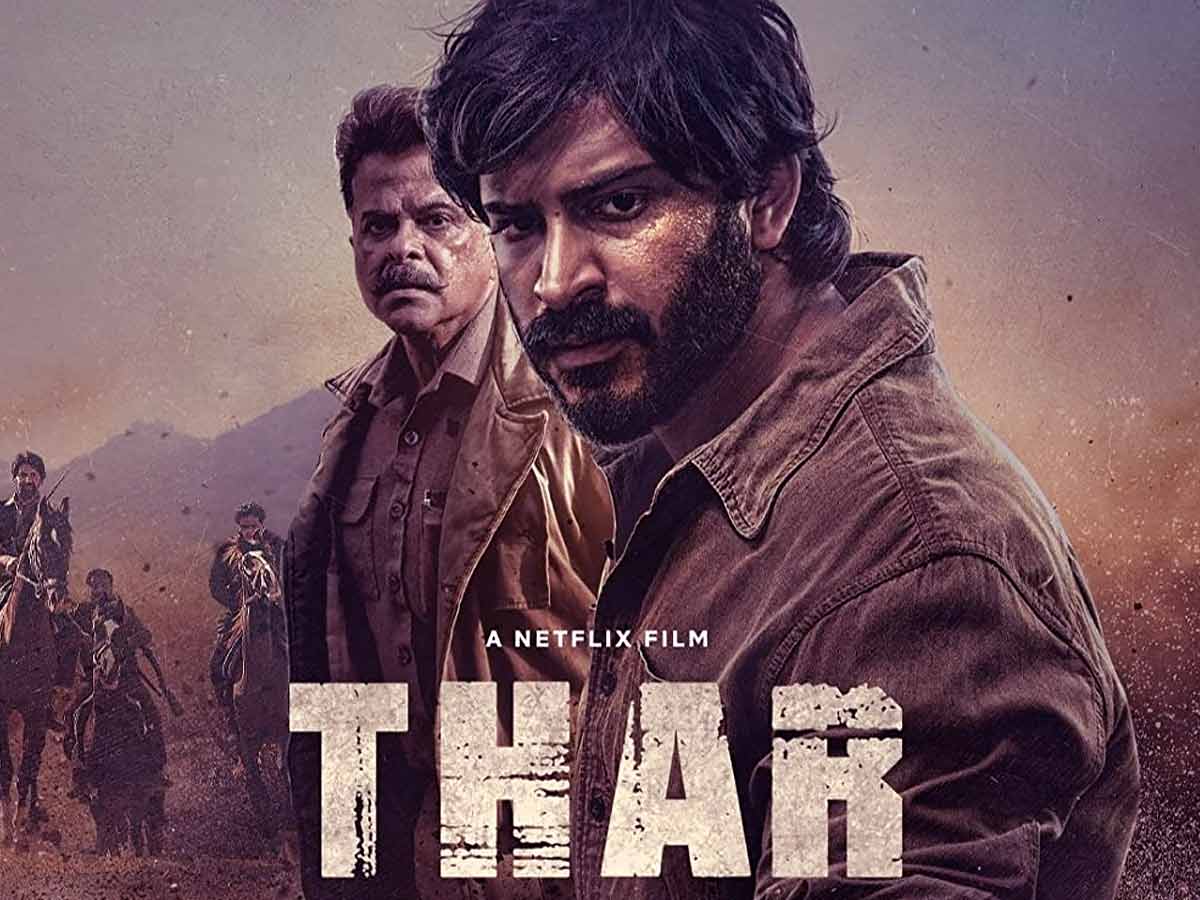 THAR is the story of strange occurrences in a remote town. Set in the 80s. A gang attacks a house in the Rajasthan town of Munabo, where the daughter is about to marry in a few days. The girl’s parents are murdered, and their wealth is stolen by the gang. Suwa (Akkshay Gunaawat) is tortured to death the next day. Inspector Surekha Singh (Anil Kapoor) is tasked with solving these cases. With the assistance of his colleague Bhure (Satish Kaushik), he conducts an investigation to determine if there is any link between the two murders. Meanwhile, a mysterious man named Siddharth (Harshvardhan Kapoor) arrives in Munabo.

He works as an antique dealer in Delhi. He requires trained men for his work, and his search leads him to Panna’s house (Jitendra Joshi). Panna, on the other hand, is in Calcutta, leaving his wife Chetna (Fatima Sana Shaikh) behind. Panna and Chetna develop feelings for each other. Meanwhile, Surekha discovers through his investigation that the murders are linked to the illegal opium trade, with Pakistani players also involved. The rest of the movie revolves around what happens next.

Raj Singh Chaudhary’s story is straightforward. However, Raj Singh Chaudhary’s screenplay (with additional screenwriting by Yogesh Dabuwalla and Anthony Catino) is excellent. The authors have sprinkled the story with some intense and unexpected moments. The characters are quite interesting, and the way they are all related to one another makes for an entertaining watch. On the other hand, the side tracks are not well developed. The dialogues in Anurag Kashyap’s films are razor-sharp.

Raj Singh Chaudhary’s direction is superb, propelling the film to new heights. First and foremost, he deserves praise for selecting such breathtaking locations. Hundreds of films have been filmed in Rajasthan. THAR, on the other hand, will astound you because it was shot in previously unseen locations. This in and of itself is entertaining to watch. Second, the director treats THAR as if it were a film from another country. The desolate locations, the silence, and the idea of an outsider visiting a strange town are all homages to Western and cowboy films.

Thar, directed by Raj Singh Chaudhary of Shaadisthan, is part neo-noir, part neo-Western, and entirely visually appealing. Shreya Dev Dube, the film’s cinematographer, makes full use of the setting – a remote and rugged village on the Indo-Pak border – to create an immersive visual experience that more than makes up for the barebones plot.

The Netflix original film, Thar set in 1985, revolves around a man with limited vocabulary and affect. Siddharth (Harshvardhan Kapoor) poses as an antique dealer but instead cuts a deadly swath through the sun-baked landscape.

Siddharth stands out like a sore thumb in the village, described as “resembling a Hollywood star” with “such deep eyes,” but manages to stay one step ahead of the investigating police inspector Surekha (Anil Kapoor).

Surekha, who is also on the lookout for opium dealers, gives Siddharth enough time to make eye contact with the wife of one of his targets. Chetna (Fatima Sana Shaikh) has the thick skin required to endure neighborhood gossip as well as the expectant demeanor of the cleavage-baring rural femme fatale.

Writer-director Chaudhary tries to give banal scenes of Surekha chasing clues and Siddharth being gruesome with an existential tinge. Even the profanity has a desperate edge to it, but Thar’s impact is purely visual. (The 108-minute direct-to-streamer film would look incredible on a large screen.)

A cop tries to make sense of senseless brutality among the bleached whites, deep browns, and intense reds. Anil Kapoor devotes himself wholeheartedly to another project that isn’t as involved as he is.

Sherlockian cop. Kaushik’s character is from a historically oppressed caste, but this revelation serves no purpose other than virtue signaling.

The film appears to be perpetually poised on the verge of transcendental revelation. Could we see the real movie, the structure behind the scaffolding, in the loops of suspense drawn around Siddharth and the clouds of dust kicked up by the tireless Surekha?

There isn’t a single one. The scaffolding is adequate but insufficient.

Finally, he crams a lot into 108 minutes. The scene in which viewers learn who the murderer is may be predictable, but it will still astound them. A few twists and turns in the second half keep viewers on the edge of their seats. The ending is suspenseful. On the other hand, the trail of Hanif Khan (Rahul Singh) and the opium trade as a whole is shaky. It’s not well integrated into the main story. Second, Surekha’s internal struggles should have been depicted more accurately. Finally, there are a few unanswered questions.

Also read : 14 Most Anticipated Movies of 2022 We Cannot Wait More For

THAR contains only one song, which is heard during the opening credits. It is quite impressive, composed by Shashwat Sachdev. The background score by Ajay Jayanthi is fantastic. The music adds to the mystery and intrigue, and it is undoubtedly one of the most memorable BGMs in recent memory. The cinematography of Shreya Dev Dube is superb. The DOP has done complete justice to the film’s virgin landscape. Wasiq Khan’s production design is grounded in reality. The costumes worn by Priyanka Agarwal are genuine. According to the script, Salaam Ansari’s actions are disturbing. Atomic Arts’ visual effects are convincing. The editing by Aarti Bajaj is razor-sharp.

THAR, as a whole, is a film of international acclaim. It’s the season’s biggest surprise, and it’s worth watching for the plot, direction, and music.