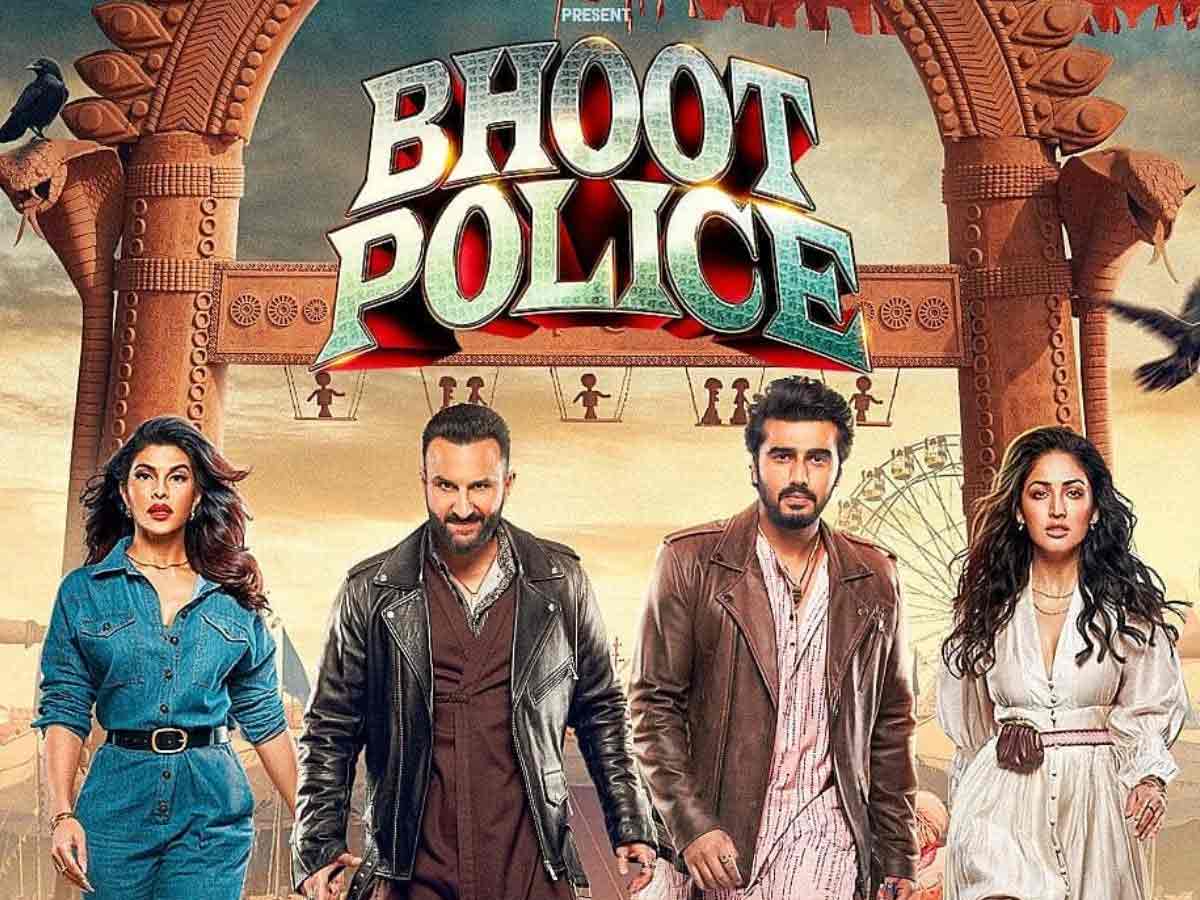 Bhoot Police is a Bollywood horror comedy film by Pavan Kripalani that premiered on September 10, 2021, at Disney+ Hotstar. The star cast of the film includes Saif Ali Khan, Arjun Kapoor, Yami Gautam, Jacqueline Fernandez, Javed Jaffrey. Produced by Raesh Taurani and Akshai Puri, the film takes a dig at self-styled god-man who dupe people in the name of faith. The aim of the film is to mock blind faith and superstitions without ‘saying it’ bluntly.

Saif Ali Khan has played the role of Vibhooti while Arjun Kapoor features as his brother Chiraunji. Yami Gautam is Maya whereas Jacqueline Fernandez features as Maya’s sister Kanika. The film also features Javed Jaffrey as Inspector Chedilal and Girish Kulkarni as Santo. The role of Kichkandi has been played by Kalsang Dolma.

The Plot of Bhoot Police

Vibhooti and Chiraunji are two brothers running an exorcist business. They are famously known as Ullath Baba and sons, and the two travel all over the country. The real trick is that the two brothers know nothing about exorcism or supernatural beings. They only exploit the superstitions of people for their own benefits.

In the opening scene, Vibhooti and Chiraunji arrive in a Rajasthan village to perform an exorcism on a young girl who is said to be possessed by the spirit of her late grandfather. The girl, however, was faking it and Vibhooti catches the girl’s lie. The girl reveals she acted like being possessed by her late grandfather’s spirit, as her parents wanted to get married while she wanted to continue her studies. Brothers helped the girl after getting to know about her story.

Ullat baba was actually the father of Vibhooti and Chiraunji, a real exorcist who helped people fight evil spirits. Ullat Baba left behind a book that Chiraunji tries to decipher but fails as it is written in an ancient script. Chiraunji, however, bumps into a girl named Maya, whose father was once helped by Ullat Baba in fighting a spirit. While the two brothers and Maya leave for Dharamshala, Maya tells them that Kichkandi, the paranormal entity that Ullat Baba helped her father fight against, is back and the workers at the tea estate in Dharamshala refuse to work after nightfall because of the fear.

The three are welcomed by Maya’s sister Kanika and as the two brothers are busy gathering more information about the paranormal entity, they come to know about a jar in the forest which contains a bone, in which Ullat Baba trapped the spirit of Kichkandi.

Vibhooti, who doesn’t believe in the supernatural, breaks open the jar and leaves the bone in the forest. The twist comes when a dog carries the bone in its mouth to Maya’s bedroom and she becomes possessed.

How will Vibhooti and Chiraunji deal with this? Will they be able to solve the mystery behind Kichkandi? To know the answers to all these questions, you need to watch the film.

Reviews: The critics at the Times of India call Bhoot Police a “Childish Horror Comedy”. The film certainly has its share of childish moments. The dialogues in the movie, including the one with the corona reference, are enough to make the audience laugh with the Kichkandi factor that intrigued him at the back of their minds.

Saif Ali Khan has done well with the village dialect that helps him in coming around as a funny character without having to try. Yami Gautam, like always, is very impressive and totally into the role. So is Arjun Kapoor. However, watching Jacqueline in such a role is totally a fresh experience for the audience and the Sri Lankan actress appears to be struggling with the role.

A lot of mountain districts are featured in horror and thriller TV shows, but for a horror movie, Dharamshala is a unique pick. The 128 minute long film can be a good weekend watch, but don’t expect it to be the best horror comedy film. It is more like an experiment that didn’t fail. However, the film has no songs and thus, no distraction. We can watch the movie in one go.

Despite being brothers, Vibhooti and Chiraunji are poles apart. While Vibhooti looks at exorcism as a moneymaking business, Chiraunji aims to carry forward the legacy of his father by gaining complete knowledge about exorcism. The screenplay is refreshing, but the actual issue is that the film looks a mash up of two different genres. Despite an impressive screenplay, the movie becomes predictable at moments and there is very little HOW factor to it.

Both Javed Jaffrey and Rajpal Yadav have tiny space in the screenplay and it is a complete waste of two brilliant actors. We can say the same for Jamie Lever. The writers are to be blamed for this. You couldn’t accommodate these actors properly in the storyline.