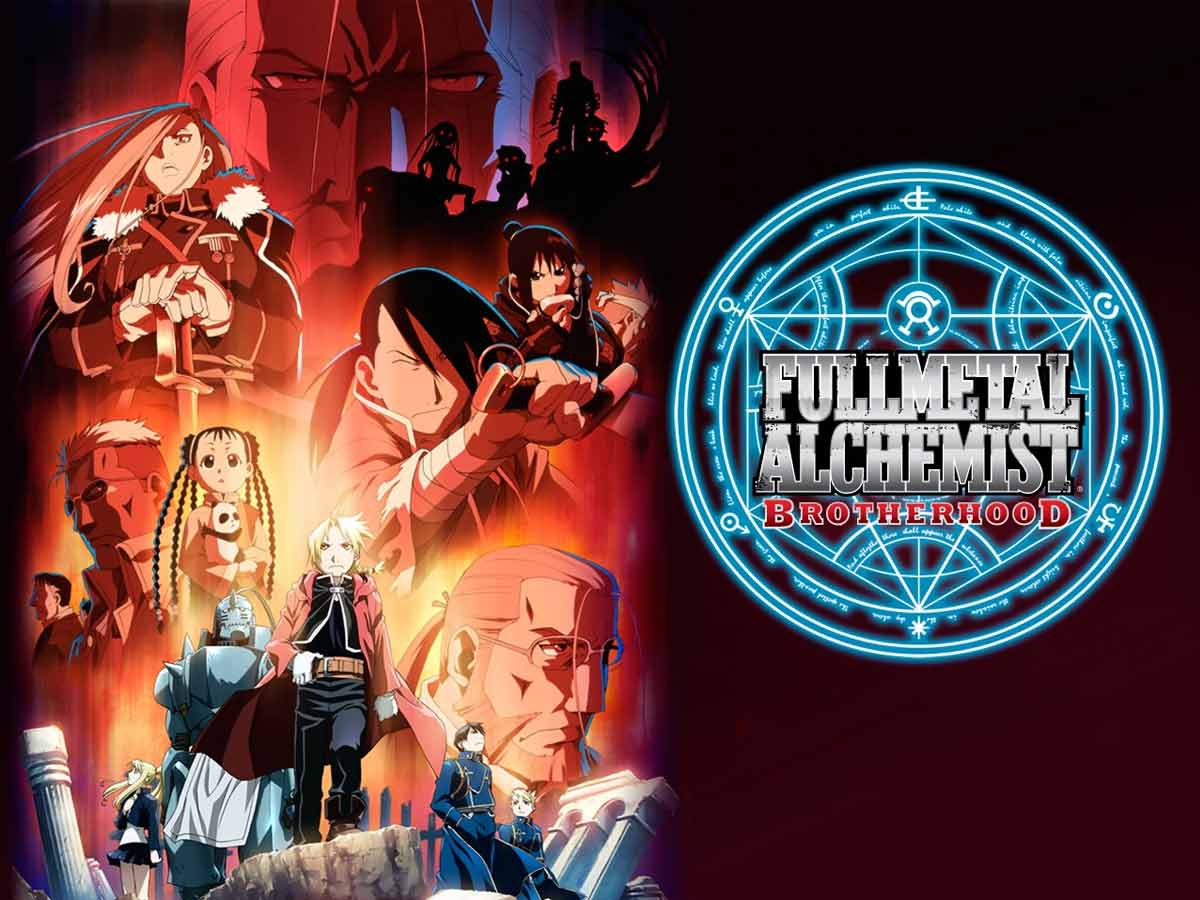 The essence of Fullmetal Alchemist Brotherhood is the same — brother alchemists Al and Edward Elric seek a way to repair their bodies following a failed transformation to resurrect their mother. You can still expect a dense narrative, interesting characters, conflict that isn’t aimed at youngsters, and fantastic lore. The squad is not let down by Brotherhood. Instead, I’ll concentrate on the distinctions for those who aren’t sure which series to watch first or if Fullmetal Alchemist Brotherhood is worth your time.

Two young brothers live in a world that resembles early twentieth-century Germany, but where “alchemy” is actual magic and has supplanted science in many aspects of life. Their father, a great alchemist, disappears one day and never returns, which still places him rather high on the overall list of outstanding anime dads. For the time being, the two brothers, Ed and Al Elric, are quite pleased to stay at their mother’s charming, gorgeous rural house. They read daddy’s alchemy books, hoping to become alchemists like him one day.

When their mother dies, though, things take a turn out to be worse. Not only that, but their father cannot appear or bring flowers… In their grief over the loss of their last remaining parent, they come up with the bright notion of using prohibited alchemy to bring her back to life.

It turns out that doing so has disastrous repercussions. Ed’s penalty is to lose an arm and a leg, whereas Al’s punishment is to lose his entire body, but his spirit is bonded to a suit of armour by Ed’s alchemy. And they don’t get their mother back.

Since that occurrence, Edward Elric has become a “state alchemist,” working for his country’s military in return for access to sensitive alchemical information and the Central Library. Edward hopes he may gain enough alchemy to reclaim his mother, as well as his arm, leg, and brother’s body. The brothers travel about their nation and have many thrilling experiences, becoming involved in political intrigues and clashes with otherworldly entities. They learn a lot about alchemy and the secrets peculiar to their own lived experiences, but they also aid a lot of others.

“We want to get to the new material as quickly as possible, but we have to display the old stuff for context, but we can get through it faster, but we must keep quality!” said the authors. As a result, if you plan to see both, start with Fullmetal Alchemist, as Brotherhood will ruin two-thirds of the original. Not does Fullmetal Alchemist Brotherhood adapt these arcs poorly, but there is no comparison to the original versions.

The comic timing in Fullmetal Alchemist Brotherhood is incorrect for the same jokes — humour breaks into serious times when it is genuinely unnecessary, and Brotherhood gives away the upcoming brief joke by going into ‘comedic art’ mode ahead of time. With the change in story pacing, it appears like they were unsure where to place the gags.

In Fullmetal Alchemist Brotherhood, alchemy is described as dismantling and then rebuilding something tangible. However, in both cases, the lesson is hammered home that for every benefit, a sacrifice must be made. In both stories, humanity is reminded that it is little and restricted, but that humanity has a particular warmth when it chooses forgiveness and collaboration over anger and greed.

Both programmes address the Western issue of religion vs. science. Alchemy is a legitimate science in this universe, however in an early episode, a false prophet uses alchemy while claiming people he is performing miracles.

However, as we will discover later, the show is certainly not as simple as “alchemy good.” Amestris is also responsible for the near-genocide of a people that resemble Middle Easterners, and their government is riddled with terrible secrets. Under the surface of their “educated” and “modern” civilization, unethical human testing is also all too widespread, reflecting the situation in the Western world in the first half of the twentieth century.

“Humanity cannot get anything until it first gives something in exchange. Something of comparable worth must be sacrificed in order to receive. That is the first law of Equivalent Exchange in Alchemy.” The notion of Equivalent Exchange appears several times in Fullmetal Alchemist. It appears early at the start of the novel (after the brothers’ failed effort to resuscitate their mother) and is so prevalent throughout the series that it might be considered its own character.

When Arakawa was researching alchemy for her series, she discovered everything contradicted itself. Instead, she found inspiration in a more humble setting: her youth on a farm. Her family ran a dairy and potato farm, and she and her sisters were required to help around the farm. The farm’s regulations were straightforward: if you didn’t work, you didn’t eat. The law of Equivalent Exchange derives from the concept of exchanging work for food.

Fullmetal Alchemist is full of weird symbols, such as transmutation circles, yet they all have meaningful meanings. The tree pictured on Edward’s Gate of Truth is known as the Sephirothic Tree of Life, and the rings reflect various truths revealed to humanity. The Tree is turned upside down to reflect the various ways truth may be viewed.

State Alchemists’ logo is a recurring emblem in the series: a white lion on a green backdrop. However, this is not a random design. The picture of a green lion consuming the sun is a frequent metaphor of the purifying process in real life alchemy, comparable to how plants absorb the sun’s rays to develop.

The insignia on Edward’s cloak and Alphonse’s armour is one most people identify with Fullmetal Alchemist, yet it has real-life origins. The Cross of Flamel is a symbol that portrays a snake curled around a cross. This sign occurred in the writings of Nicholas Flamel, a 14th-century French scribe who became known as an alchemist after his death. It’s also on the side of his gravestone, which he designed. The sign represents “fixing the volatile.” To put it another way, a curative. It comes from a Bible scripture.

The Ishval Civil War is a recent scar on the history of Amestris in Fullmetal Alchemist. Despite clashes over cultural and theological differences, the inhabitants of Ishval coexisted with Amestris in relative harmony. That is until an Amestrian soldier unintentionally shot an Ishvalan toddler. The consequence was first rioting, then all-out battle, with Amestris emerging victorious. As refugees, the Ishvalans were dispersed across the country.

The Japanese government seized Ainu territory: Arakawa drew inspiration for this plot from the real-life war between the Ainu (a Japanese indigenous people) and the Wajin (the mainlander Japanese). To push the Ainu to conform into mainstream Japanese culture, the Japanese government took up Ainu property and handed it to the Wajin in 1899. The statute was in effect until 1997, and the Ainu were not formally acknowledged as an ethnic minority until 2008.

Stereotypes are being deconstructed in Fullmetal Alchemist Brotherhood,

There were no female characters in early Shnen manga. Women were progressively incorporated in the stories in the 1980s, but they were restricted to the position of the adorable chic. Things have improved since then, and many recent Shnen manga now contain strong female protagonists.

Given that Arakawa has defied gender norms by making a Shnen manga, the female characters in Fullmetal Alchemist defy them as well. Because of her frigid personality and ruthless treatment of others, Major General Olivier Mira Armstrong is known as the Ice Queen. Winry is a tough and brilliant Automail mechanic. Instead of being protected by a man, Riza Hawkeye works as a bodyguard for one. And Izumi Curtis is an alchemist and a martial artist. If you’re looking for a new role model, I have a few recommendations.

The narrative is a powerful, emotionally moving piece of art. Fullmetal Alchemist Brotherhood is a must-see. You may skip the original anime or watch it afterwards for comparison.

While both series do a terrific job, and the tale is highly moving, creatively original, and amusing, I prefer Fullmetal Alchemist Brotherhood to the 2003 anime because it is a bit more serious and profound, but also more expansive and suspenseful.

In contrast to other anime of comparable genres, I believe Fullmetal Alchemist is one of the finest series available. Fullmetal Alchemist Brotherhood’s finale may not have pleased me to redress every wrong committed by the adversary or making all that much logical sense, but it was still a beautiful and touching finish. I felt the last 10 episodes seemed to drag on the fighting leading up to the climax, but that was probably because the authors were probably struggling to come up with such a meaningful and satisfying (mostly) finish for everyone of their storylines with such a large cast.

Even if you aren’t a big fan of action, which there is enough of in this anime, I believe the plot, characters, and intrigue are compelling enough to make it worthwhile to watch. I realise some people avoid famous anime merely because they are overhyped, but I believe that Fullmetal Alchemist Brotherhood is a highly unique anime in its own right that deserves to be recognised. That being said, I, too, am not a lover of hype, so I’ll simply say that Fullmetal Alchemist Brotherhood might not be for you if you don’t enjoy action and/or storylines with a lot of mystery / background components to consider while you watch.