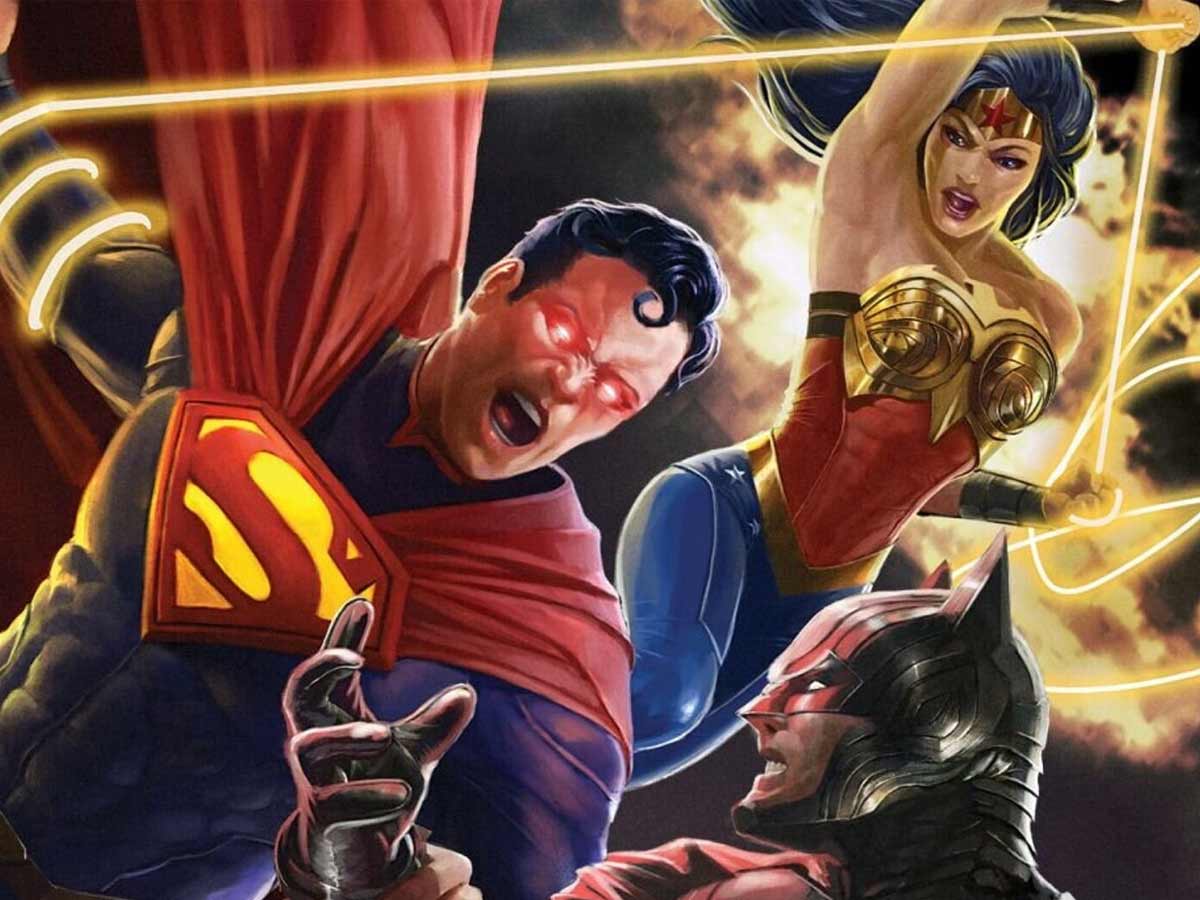 It’s easy to see why DC’s Injustice: Gods Among Us franchise is so popular. The original 2013 game offered an intriguing alternate reality scenario in which Superman cracks and becomes Earth’s tyrant, prompting Batman to lead an underground resistance. That notion has been significantly built upon by DC’s several Injustice prequel comics and the 2017 sequel game. It’s hardly unexpected to see the brand branch out into animated films. What is astonishing is how poorly that winning idea performs during the changeover?

It’s a bird, isn’t it? It’s a plane, isn’t it? No, it’s Emo Superman, and he’s about to take over the world. So it goes in Injustice, the newest DC animated film to hit home video, which is now available for review.

The concept of the world’s most recognisable boy scout succumbing to the evil side has always been a predictable, yet enticing, premise. Over the years, Superman has broken bad through a variety of tactics, most of which involved some sort of brainwashing/Kryptonite hijinks. However, there’s something more intriguing about the Man of Steel choosing to take that dark path himself. The animated film Injustice attempts to explore this issue, albeit with varied success.

The Injustice universe is a dark and twisted reimagining of the DC universe, but it has never been without subtlety. Its animated version abandons this in order to get to the game’s wicked Superman.

By the end of the film, it has skipped ahead to the game, bringing in an alternate Superman to vanquish the Injustice version. It appears out of nowhere with little to no preparation. We didn’t even get to MEET this parallel Superman before he arrived, so there’s no story/emotional connection to be made.

Injustice is largely concerned with Superman’s demise; his slow but unavoidable decline from a beacon of hope to a godlike despot. The comic’s force and strength come from fleshing out his fall from grace. He is severe in his techniques in Year One, but there are some limits he will not exceed. At that point in the tale, he is a Superman who will kill, but he is not a heartless madman. In the film, he just murders several youngsters who adore the Joker.

They are completely incorrect, but for Superman to go that far with no character development feels weak. At the very least, it simplifies a complex/compelling tale.

Both the comic book series and the video game Injustice were huge successes. The idea of Superman becoming a dictator and most of the Justice League backing him was intriguing. We’ve seen a villainous Superman before, but nothing like this. He felt he was the hero in this realm. It was understandable in some respects.

The film begins in the same place as the first issue of the comic, on the tragic day when the Joker’s terrible attack on Metropolis sets a bereaved Superman on a dark path towards dictatorship. To describe how much of the series’ timeframe the film covers would be a spoiler, but it’s a lot. Its fundamental error is that it tries to cover too much material, losing sight of the rich character work that makes the Injustice comics so memorable.

In comic book time, the conflict between Batman’s insurgency and Superman’s regime lasted five years. With that in mind, there should have been several Injustice films. Or, if they took the animated series route, they could go into more detail and make it continue longer. Instead, everything was condensed into a single feature, and the entire production was hurried.

Perhaps the most frustrating aspect of Injustice is that it attempts to deliver a strong multi-comic plot in a one-hour and eighteen-minute film. There are a few fatalities in this picture, but we cannot digest them adequately because of the film’s fast speed. That we spend so little time getting to know these individuals beforehand doesn’t help.

Getting to Superman slaying the Joker made perfect logic. That was the most famous scene in the series. Everything following that happened far too rapidly. Omitting the moment in which he was seated in the Fortress of Solitude with Joker’s blood still on his hands emphasises this. That was a pivotal moment that had to occur. We’d never seen Superman in this condition before, so it was stunning in the source material, but we didn’t get that here.

Another hurried scene was Wonder Woman’s effort to kiss Superman. It had just been a week since Lois’s death. That is not something Wonder Woman would do — not even in this universe. It gave her an emotive rather than a deliberate appearance. In the comic book story, Diana took her time and made sure her efforts didn’t jeopardise her relationship with Superman.

Then there was the conclusion. Five years of work on a film that might have been completed in a couple of months at most. There wasn’t much feeling left in Superman’s loss by the end of the last battle. It was simply another enemy that the heroes could fight. Meant something when Superman beat his evil counterpart in the comic book and video game. It wasn’t anything out of the ordinary here.

In a Flash, he was gone.

The Flash was a pivotal character in the comics. He was the only member of the Regime that seriously questioned Superman and everything he did. Flash did things out of respect for league and his teammates. It appeared as if he frightened Superman. Flash played no role in this scenario. Even after he died.

He was slain, and we heard nothing further about it. If nothing comes of a death, it is meaningless. How can you not acknowledge the death of one of the Justice League’s greatest members? That’s why Superman’s transformation into a tyrant after slaying The Joker was so significant. Breaking the Man of Steel is not something to be taken lightly. Unfortunately, it was the Flash’s.

Taking a Page from Marvel’s Playbook

When seeing Injustice, you’re not sure if you’re watching an adult or a children’s movie. This is due to the film’s wit. The writers clearly reviewed the Marvel Handbook of Mood Whiplash, because it incorporates a few ‘jokes’ to break up some of the intensity in various passages.

As an example, consider an early Superman and Batman scene. After dispatching a gang of armed thugs, the two indulge in some classic banter. Supes questions Bats about how he knows Lois is pregnant. The Dark Knight responds he is shaking, which he has never done when facing Doomsday. Scene cut to Superman’s hands trembling (and the silly grin). Maybe I’m just a grump, but this style of humour is infantile and, at most, groan-inducing.

Not that injustice lacks any characteristics. The primary tale is, mostly, a good recounting of events, with a few changes here and there to make things interesting. Ending, in particular, contains a lot of intriguing surprises, including a climactic combat that resolves in a more gratifying manner than the original source material. The film also shines a focus on other lesser-known DC characters, with heroes like Mr. Terrific and Plastic Man able to shine on a larger platform alongside DC’s heavyweights.

The animation and battle sequences are aesthetic pleasures that also portray a darker aspect to the DC universe than people may be used to. The voice acting isn’t nearly as outstanding, with certain lines seeming a little wooden in their delivery, but the voice work catches the essence of the characters, mostly. Justin Hartley’s performance as Superman is especially noteworthy, with his strengthened sense of righteousness amplified by agony that is all too obvious in his voice. Gillian Jacobs and Oliver Hudson, who play Harley Quinn and Plastic Man, respectively, provide light comedic relief and help keep the picture from becoming weighed down by its own seriousness.

It’s difficult not to feel that injustice was a squandered opportunity. The video games and comic books were extremely popular for a reason other than allowing you to play out Batman vs. Superman. The tale that holds this franchise together is fantastic, but its adaptation does an injustice to the work that came before it by rushing to the finish before we’ve even got to know each other.

To summarise this review, there is a lot of injustice in this cartoon film, although it isn’t totally in the tale. Rather, its presence is more noticeable in the film’s hurried execution, which packs in much too much for its own benefit. As a result, the film looks to be attempting to break the Guinness World Record for the number of DC characters in one film, rather than delivering a cohesive and entertaining plot. You’re best off skipping this one and going elsewhere for your superhero cartoon fix.

If you’ve never played the Injustice video game or read the comic book, you’ll likely love the Injustice animated movie. But, if you’re like me and a fan of both, you’ll be let down by the film’s squandered promise.

Welp! Injustice was an unjust depiction of the most crucial arcs of DC comics