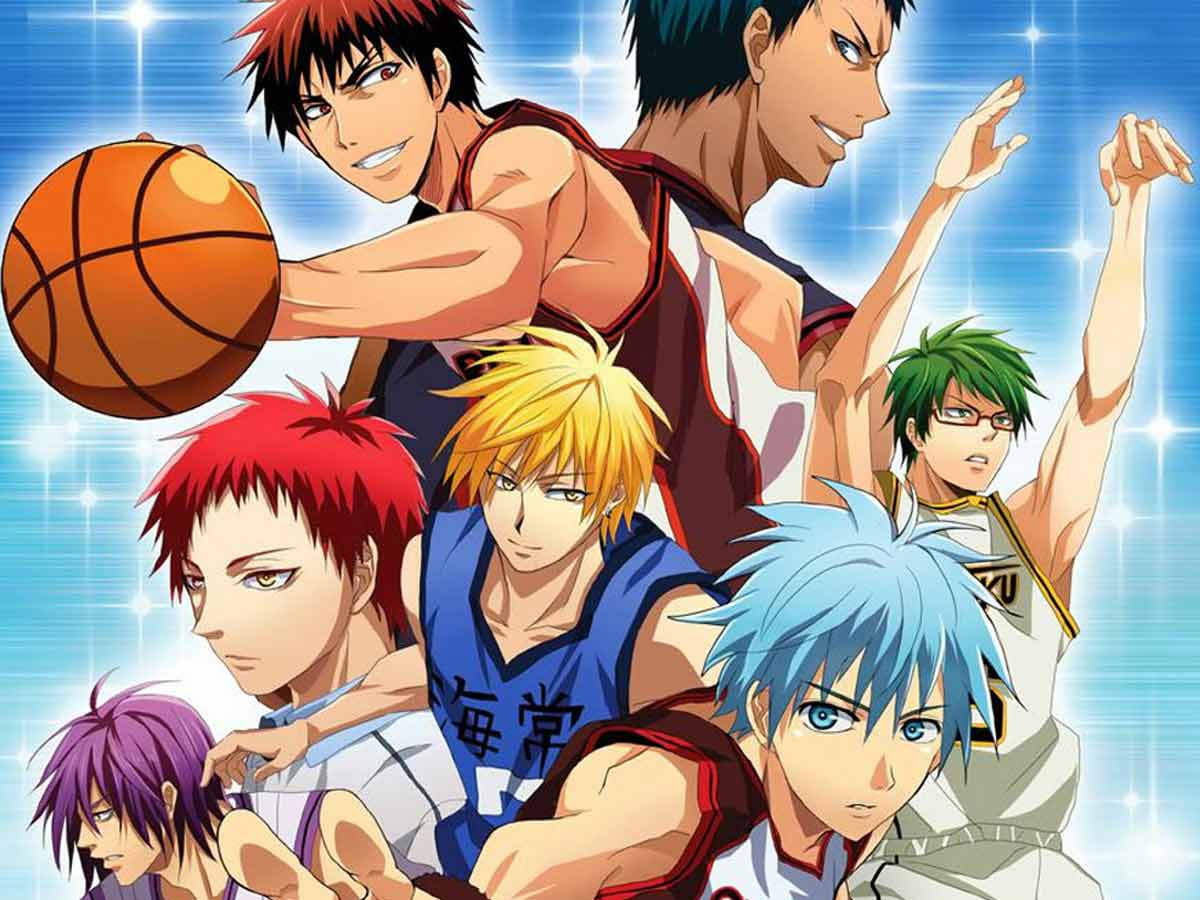 After the similarities to Haikyuu, the buzz for Kuroko no basket was real for me. Despite my low expectations, this anime disappointed me. It began nicely…

A middle school basketball team known as the “Generation of Miracles” has since graduated to separate high school teams. When people talk about the squad, they only name five players, oblivious to the ‘phantom’ sixth member, Kuroko, who is on the floor (just go with it). When Kagami, a footballer with immense promise, attends his high school, he receives fresh vigor. They work together to win Japan’s inter-high championships, even if it means defeating Kuroko’s old Miracles comrades. 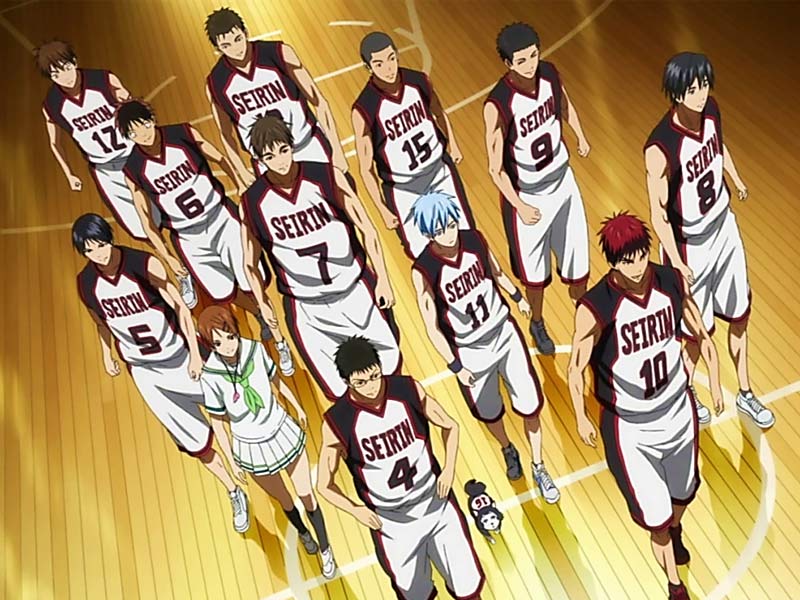 At first, I believed everything was well with Kuroko no basket. We get to know the characters quickly, the narrative doesn’t detract from the action, the coach is amusing, the first proper match is enjoyable, and the animation performs the sport properly. Adore Hinata, I like the running comedy of Kuroko being so subtle that people often forget he’s there. The anime does, however, strain the validity of this in bouts. Even the audience acts as though Kuroko has been wearing an invisibility cloak the entire time. It’s a little stupid, but it’s not a tremendous problem. The author’s failure to control the power creep is the source of the problem.

By the end, simply by gazing at you, one person may make you drop the ball. I’m not joking. When he stares at a player, they place a brick directly on the court. The mystical aspect in the tactics detracts from their impressiveness since, rather than success resulting from hard effort and planning, magic has the upper hand. When Superman bulldozes human linebackers to score a touchdown, it’s not spectacular. A hint of the otherworldly would have been welcome, but just when I think it can’t be much sillier, Kuroko no basket proves me wrong. 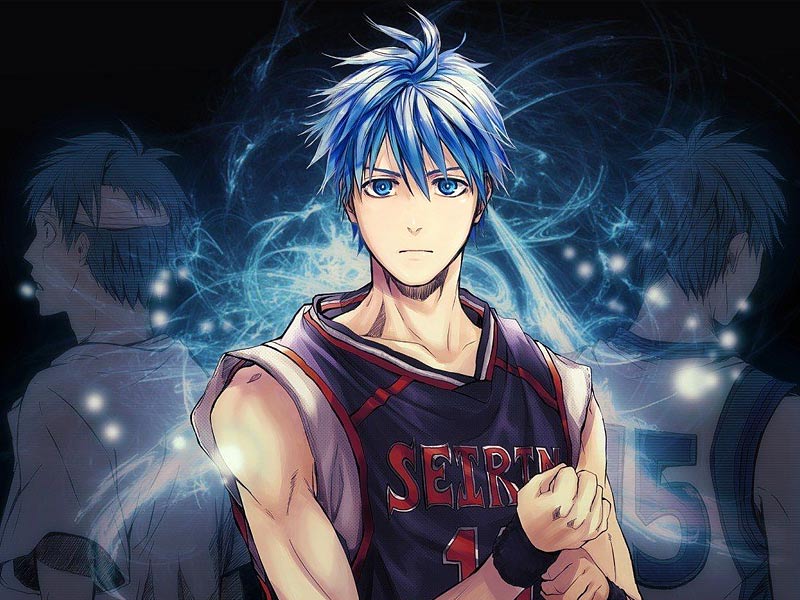 If it hadn’t taken itself so seriously, this mystical approach to basketball may have flourished. No one questions a player who rushes from mid-court to block the hoop faster than the pace of a pass. No one ever laughs at the absurd tactics on show. The author is eager to legitimize his sloppy technique to depicting basketball in literature. A little of Food Wars would do wonders here.

Seasons 2 and 3 are nothing more than a series of tournament matchups against other teams, each with one Miracle player. Season 1’s hints for potential external drama go by the wayside. This can be interesting if the Miracle players have depth. They aren’t. These shounen stuffers, like their abilities, have the ‘one quality’ that identifies them, with no layers to make them memorable. I don’t remember any of their names. I recall them in their rainbow color. Character depth attempts to enter the court near the conclusion of each match to middling results, which frequently amounts to a full 180 in personality.

Kuroko no Basket features a persistent sense of urgency to get the next game started as soon as possible, lest the audience lose attention on trivial things like “characters” and “plot.”

Kuroko no Basket is in such a hurry that it loses sight of Kuroko. What irony. Throughout several episodes, he is the least prominent character, while the next player on the rainbow gets all the attention. For too long, even Kagami becomes a shadow. Season 3’s airtime balance is appalling.

The Detailed review of Kuroko no Basket 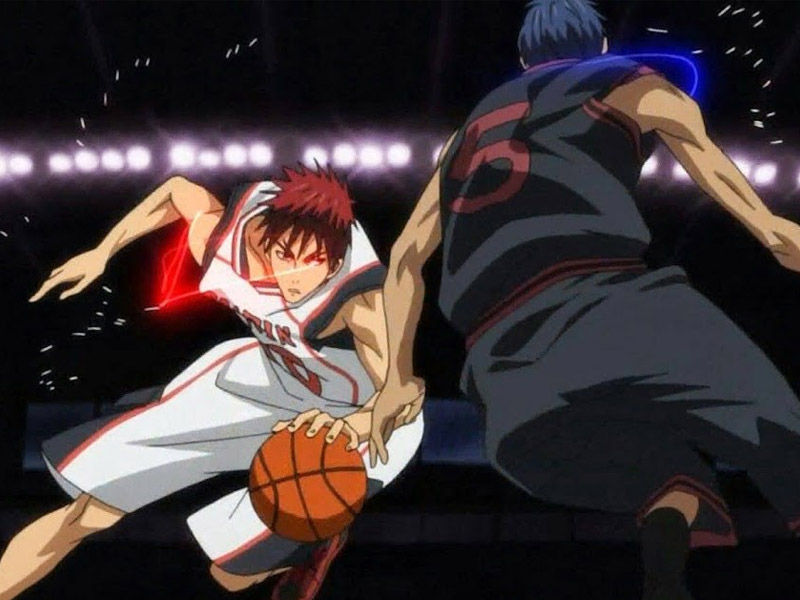 The characters are likable and make the show enjoyable to watch; the two main characters are foils to each other, which creates some amusing moments and banter between the two characters, but they are also highly in sync with each other while playing, creating a duo who is entertaining to watch and makes the action much more interesting. Haikyuu also performs an excellent job of this with its two main characters, who have very similar dynamics but opposite personalities. Overall, the interplay between the two major characters in Kuroko no Basket provides the spectator with a lot of delight.

Kuroko no Basket is jam-packed with excitement, including jaw-dropping dunks and overall pro-level play. Kuroko no Basket is what you’d get if you condensed all the significant points of an NBA game into a 23-minute episode. The actors act out almost-superhero-like plays and are animated in a way that shows how powerful these high schoolers are. While there are still spectacular plays exhibited with slo-and mo’s focus in Haikyuu, the plays in Haikyuu are far less superhero-like, which I shall discuss later.

Kuroko no Basket’s enemies are quite apparent; from the beginning, the audience learns about each adversary or figure who is a part of the Generation of Miracles, who Kuroko’s team would ultimately confront individually. In this approach, the program builds up the evil men before the good guys battle them, and we get a decent idea of who Koroko’s squad will be up against and what their skills are. In Haikyuu, the spectator is also shown who the adversaries are, albeit through flashbacks and references to background. Both programs are excellent at this. 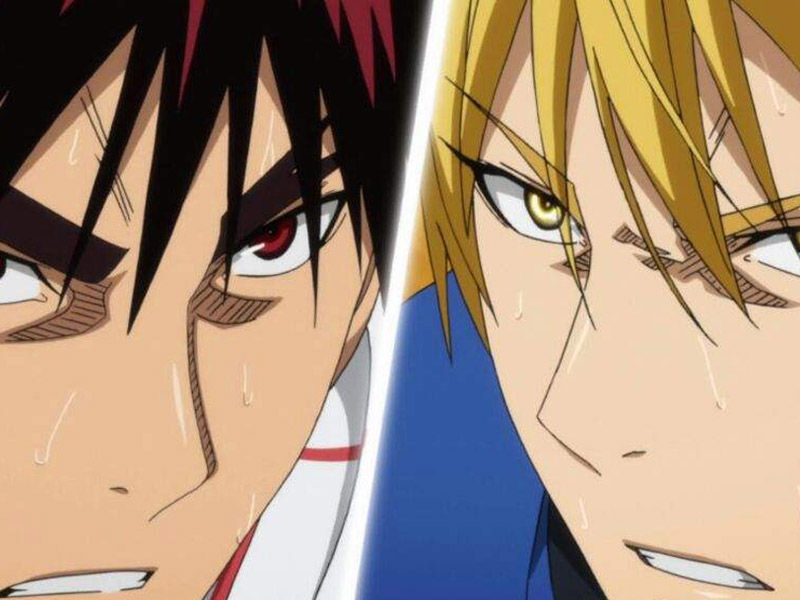 The first major disadvantage of Kuroko no Basket is its realism. Every key character in Kuroko no Basket is an expert at basketball, with some of them possessing unique basketball talents that are exceedingly ridiculous and more akin to fantasy anime abilities. While this makes the program considerably more action-packed, it also creates a greater distance between the characters and the spectator; this is also true of the character design.

They are all exceptionally fit, with enormous muscles, broad shoulders, and adult-like looks, although they are high-school students, making it difficult to relate to the characters and view them as high-schoolers at all. The characters in Haikyuu are slender, with enormous heads and infantile characteristics that distinguish them from the grownups in the program. The audience gets the impression that the protagonists are merely teenagers playing sports for their high school, rather than professional players who are talented in all aspects.

Haikyuu also maintains the sport’s realism in mind; while there are individuals who are extremely good in particular areas, their abilities are still within the realm of human capability. Perhaps “it’s an anime, so why does it have to be realistic?” which is true, but the reason it matters is that the show’s focus is on basketball, a sport played by regular people, and by giving the characters special inhuman abilities, it transforms from an anime based on a regular thing to an anime based on a regular thing that also has unexplained magic.

An anime can be set in an ordinary world but also contain distinct fantasy characteristics and function well, but the major difference is that in this anime, the focus of the show is typically on the fantastical aspects of the world and how they impact the world, with Parasyte: The Maxim being a notable example of this.

Kuroko no basket lacks the notion of development and progress. The characters in Kuroko no Basket are already the best of the best; they are not striving to become amazing players, but to be better than their amazing opponents and claim the title of greatest; they strive for the top and begin as the best players around already, with little improvement of the characters being shown in the show unless it is to beat an opponent’s specific talent. 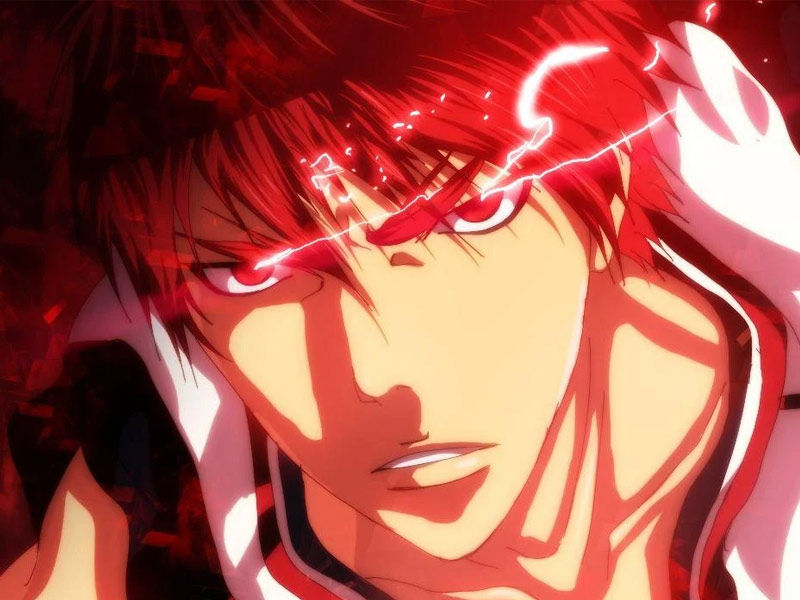 My last observation on Kuroko no Basket is that the audience never learns about basketball or its laws. Sure, we witness dunks and passes, but we’re never informed why this character had to pass or why that character went for a dunk there. We learn about the sport as the characters do in Haikyuu, with footage of the coach discussing a play they were about to try, or a player assisting another player who is unsure about a regulation.

Regardless of the show’s flaws, I strongly recommend that you watch Kuroko no Basket, which Netflix recently published season one of. The program is entertaining to watch, and its imperfections aren’t cause to shun it entirely. I also recommend watching Haikyuu, which I consider being a superior version of Kuroko no Basket and one of my favorite anime.

To end on a pleasant note, I must applaud Kuroko no basket for emphasizing the pressure that comes with becoming the best. Most anime, whether sports or warfare, depict the strongest characters as never letting the strain get to them, yet in fact, being the greatest comes with a distinct set of pressures that lower players cannot relate to. This is a great addition — it might have been the major conflict.

Why you should Watch Kuroko no Basket?

If you haven’t watched Kuroko no Basket, you are in for a thrilling and action-packed sports series. The manga and anime did an amazing job of depicting stressful in-game moments; characters are portrayed with dramatic facial expressions as they urgently want to win, and as viewers, we can’t help but cheer them on as if we were there in the audience.

However, it should be mentioned that this series has received some criticism for its inaccurate depiction of basketball. It’s true that the Generation of Miracles players have some incredible basketball talents; but perhaps these abilities aren’t as far-fetched as they appear, given that we witness some extraordinary ball-handling abilities from genuine NBA players. To draw parallels, Shintaro Midorima, a shooting guard who can shoot a three from anywhere on the field, is comparable to Stephen Curry of the Golden State Warriors and Damian Lillard of the Portland Trail Blazers. 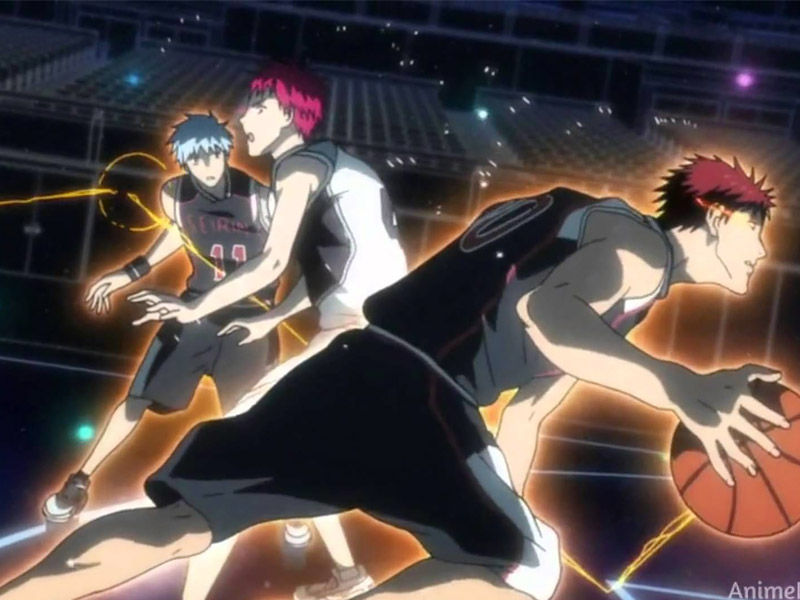 Another advantage of Kuroko no Basket is that Tetsuya Kuroko is not like other shonen sports anime characters. Rather than becoming the team’s All-Star, Kuroko wants to stay in the background, assisting his colleagues in becoming talented players. He has tremendous misdirection ability, which means opponents can’t keep their eyes on him to defend since he’s always moving with or without the ball. On and off the court, he shares a brotherly relationship with his teammate Kagami.

Aside from Kuroko and Kagami’s relationship, this story has some classic rivalries. In each episode, we watch members of Seirin High’s basketball team working to develop their skills in order to compete against the Generation of Miracles, who are presented progressively as the squad improves.