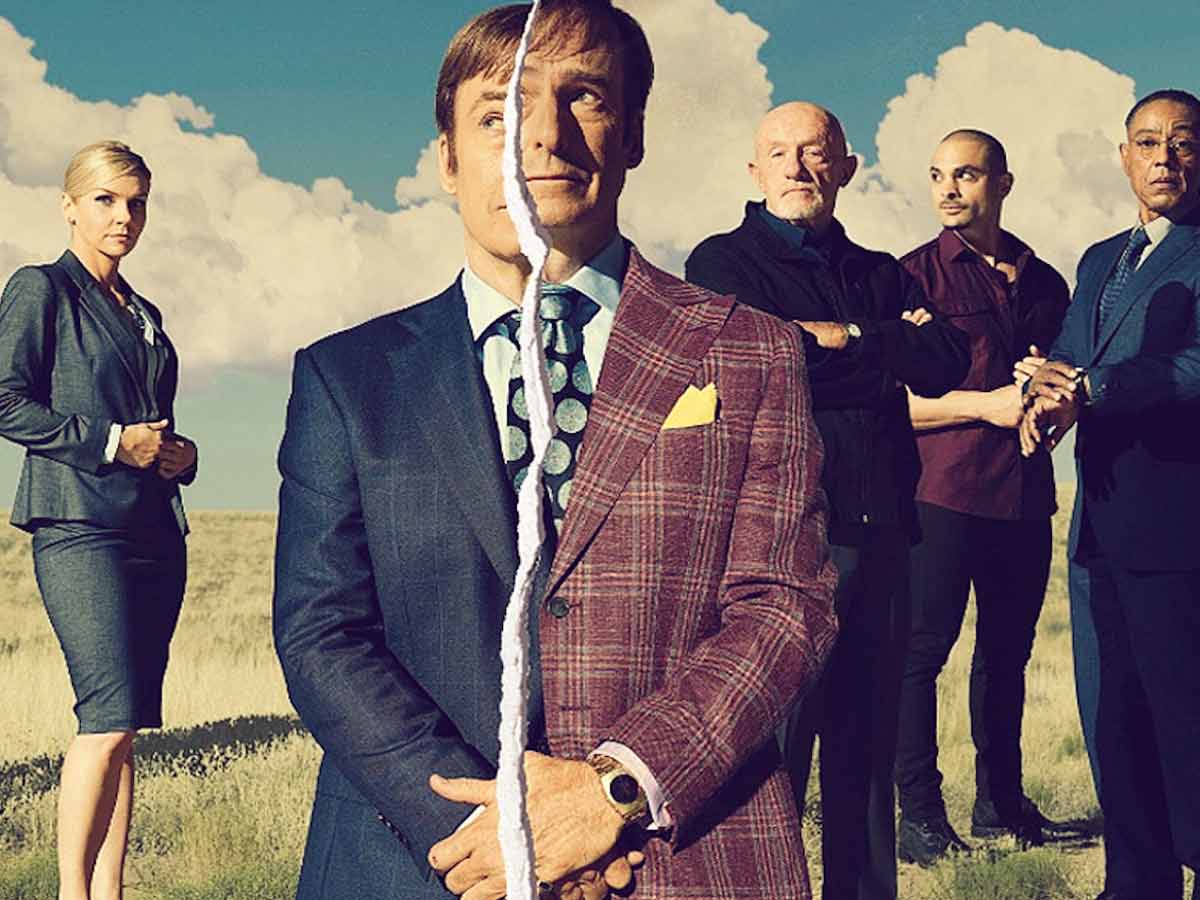 A country club sting, a motel refuge, and a violent storm on the horizon all collide in a season premiere in which no one has a complete picture.

So, instead of a Gene, Season 6 begins with a teardown. “Wine and Roses” begins with a head-fake rather than a flashback to Jimmy under yet another new identity, remembering instances of regret in his life and pain he has caused others. A monochrome cascade of ties (set to the instrumental that helps lend the episode its name) gives way to a lavish, full-color tour of the former Chez Goodman, as a full crew works to clear an ostentatious palace of everything but the ties.

It’s a sad reminder of the fate that Jimmy McGill (Bob Odenkirk) is doomed to face, just like the rest of the season’s cold opens. The tragedy of those Cinnabon scenes isn’t where he is, but what he leaves behind. While this opening sequence lacks the man himself, “Better Call Saul” adds a few more strokes to the tapestry that its predecessor series didn’t have time to fill in.

If the Gene we see is a hollowed-out man, switching between staring into nothingness and peering over his shoulder somewhere inside an Omaha shopping mall, this crash course in his opulent cartel lawyer lifestyle points to a guy who was trying to fill a void long before he had to flee the Southwest.

We’re off faster than you can say “chest of drawers” to follow the aftermath of last season’s compound raid, with Nacho (Michael Mando) on the run from any vengeance-seekers.

It’s easy for a show like “Better Call Saul,” where the characters are frequently in mortal danger, to become stagnant after a while.

But Mando, like so many others in this cast, can convey entire novels’ worth of emotion just by looking at you.

From Nacho’s desperation to get his phone to stop vibrating to the concerned looks out the motel window when he finally makes his way to temporary safety, writer Peter Gould and director Michael Morris trust Mando to say everything he needs to say with an intense stare and a furrowed brow.

Nacho, of course, is still saying actual words. His check-ins with Tyrus (Ray Campbell) are brief, but there are hints that someone is expecting something in return for his end of the bargain. In this case, the return is “some assistance in avoiding death.” Mike (Jonathan Banks) appears to have the same expectation, telling Gus (Giancarlo Esposito) in an icy office conversation that’s one signature of Mike’s tongue click shy of a confrontation.

Gus’ spider-sense tells him that the mission to take out Lalo (Tony Dalton) wasn’t exactly a smashing success, even when his entire strike force was wiped out in the process. If Lalo is still alive, any loose end becomes even more dangerous. That realization is probably why Mike doesn’t answer his cell phone: if someone falls off the marble run of Gus’ plans, he might be called in to catch them as well.

At this point, Lalo’s homicidal credentials aren’t exactly unproven. Nonetheless, this premiere provides a few more examples of human collateral damage left in the wake of the man. To be sure, these cold-blooded killings are heinous. There is still a concerted effort to demonstrate how Lalo’s methods work as further proof of how he has avoided death and remained in power for so long.

He’s ruthless and cunning in equal measure, a terrifying combination even before you factor in Dalton’s casual, matter-of-fact approach to the character. The fact that he can crack a faint smile seconds after killing total strangers — the pair of men running the border-crossing run — serves to demonstrate his view of these killings as a simple cost of doing business.

Also Read, Cleveland Abduction: The Most Disturbing series the

“Better Call Saul” has a tendency to focus on the threat of violence and the aftermath rather than the bloody middle section. Take, for example, the Los Pollos Hermanos explosion, the “Bagman” shootout, or Lalo’s murder of a Travelwire employee. (For those who haven’t made the connection yet, the latter was played by future impressionists of former presidents James Austin Johnson.) This show has its fair share of corpses, but it appears to be withholding showing in-the-moment brutality until it happens to someone who has more than a passing effect on the plot.

We know it won’t happen to Jimmy, who we finally see awake in bed after all the other series regulars have been found. He’s probably thinking about what he thinks was a close call. It’s also possible that he’s still a little shaken by the arrival of Finger Guns Wexler, who may not have taken his last name but maybe adopted some of the traits he dislikes the most.

Kim (Rhea Seehorn) and Jimmy’s diner conversation reflects this hesitancy. (The El Camino Dining Room is a real place, not just a fun nod to another “Breaking Bad” spinoff!) That Lalo living room brawl has continued to drive this couple apart. Kim is reenergized, albeit with a healthy dose of concern about Saul’s clientele.

Her public defender work gives her a sense of fulfillment, and she isn’t backing down from her casual remark about destroying Howard Hamlin’s professional reputation. Perhaps she senses that the two of them are already on borrowed time. Perhaps what’s coming through is a little bit of secondhand hubris, caught by spending too much time with the Brothers McGill. Whatever the reason, it adds some much-needed levity to the episode’s second half.

Morris and Gould understand, as evidenced by the show’s track record, that the key to a good heist is a laser-like focus on details. The sheer amount of toilet paper required to clog a drain, the precise location of Hamlin’s locker, and the strategic towel placement: are all precise cogs in a small-scale operation with large ramifications.

Ed Begley, Jr. deserves credit for allowing just enough skepticism to creep in while Clifford Main reassures Hamlin that he has nothing to worry about when the tiny packet of what-they-don’t-realize-isn’t-cocaine drops on the ground between them.

Jimmy’s arrogance has gotten the best of him in the past, but this time his instincts about his powder-planting efforts were spot on. Whether or not his actions were justified at the time, he’ll be pursued by more than just cartel bosses as he tries to establish his fledgling Saul Goodman practice.

To finish, consider the World’s 2nd  Best Lawyer mug, a late casualty of Jimmy’s desert misadventures. Kim gave him the gift, so she had the right to take it away. A cup that can’t really function as a cup anymore isn’t as tolerable as a duffel bag filled with wads of $100 bills, despite all the physical reminders of their respective brushes with mortality.

It’s a kind of poetic bookend. That single mug carries far more weight than the truckloads of clothes, furniture, and trinkets that began the episode. Jimmy is going to lose everything, no matter when it happens. Now we have 12 more chapters to figure out how.