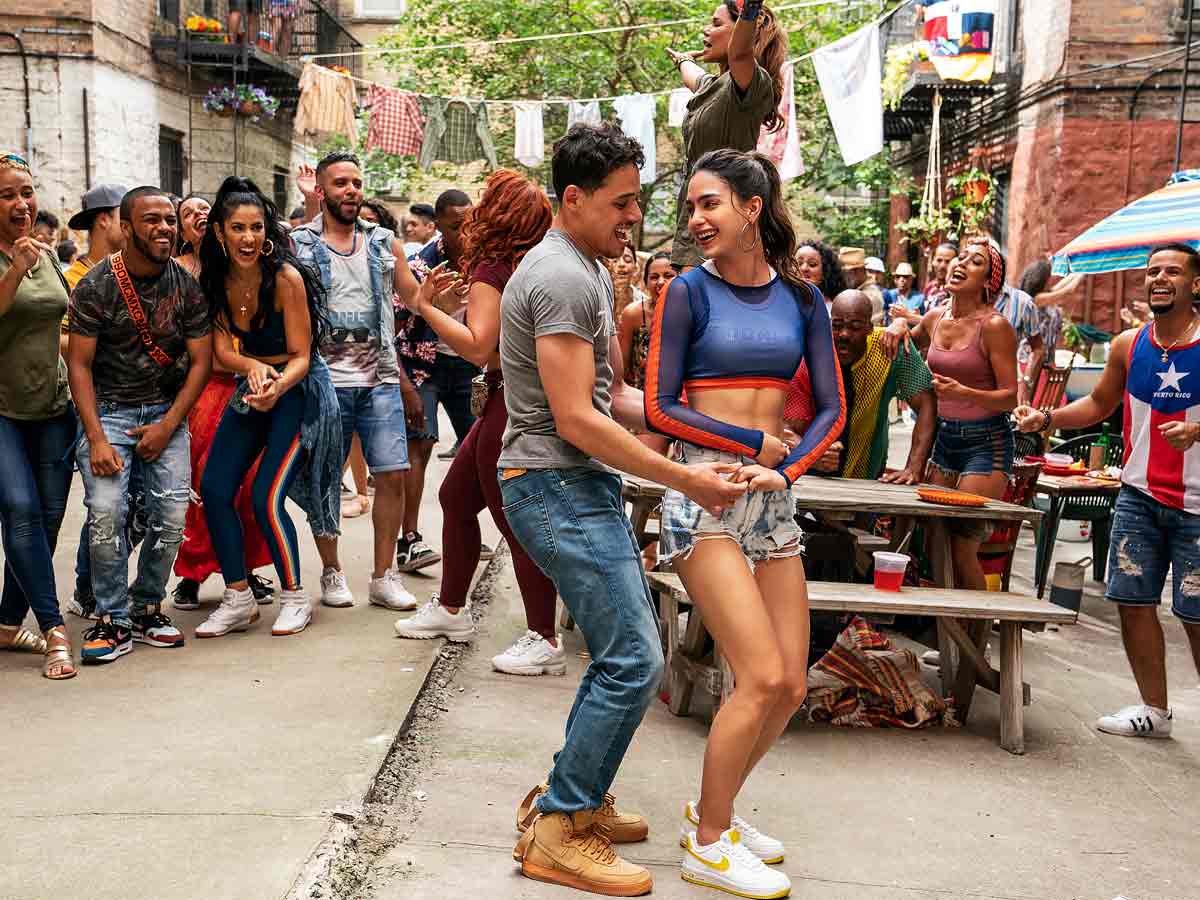 “In the Heights” opens with a man, Usnavi (Anthony Ramos), recounting a story to a gathering of children. They’ve gathered on the terrace of a tavern on a palm-fringed, sun-kissed Dominican Republic beach. El Sueito, or the Little Dream, is the name of the bar, and it serves as a hint, a spoiler, and a key to the themes of this vibrant and poignant musical.

A dream can be a delusion or a goal, an escape or an aspiration, a denial of what is, or an affirmation of what could be. All of these meanings are embraced in “In the Heights,” adapted from Lin-Manuel Miranda and Quiara Alegra Hudes’ Tony-winning Broadway play. It’s a dream come true after more than a year of sluggish streaming, mediocre entertainment, and panicked room scrolling.

Jon M. Chu (“Crazy Rich Asians”), the film’s director, leans on the anti-realist traditions of Hollywood song-and-dance spectacle to transport the characters (and the audience) to high realms of feeling and magic. In a lovely and exhilarating rejection of gravity, two lovers step off a tenement fire escape and twirl up and down the building’s walls. A public swimming pool is transformed into a lively and colorful Busby Berkeley kaleidoscope. A beauty salon shelf’s wigs bounce to the beat of a major production number.

Simultaneously, this multifaceted, intergenerational story of family, community, and upward mobility is grounded in the real-world soil of hard work and sacrifice. Usnavi’s and his neighbors’ and friends’ modest goals are mirrors of a much larger desire – the American ideal, which the film embraces without cynicism even as it points out certain paradoxes.

We have whisked away from the tropical serenity of El Sueito to the July sweltering of Washington Heights, a section of Upper Manhattan framed by the George Washington Bridge and illuminated by Hudson River sunsets. Its streets are like a two-poled magnet. The promise of economic opportunity drew immigrants from the Caribbean and other parts of Latin America in the twentieth century, including Usnavi’s father, who is now deceased, and the neighborhood matriarch Abuela Claudia (Olga Merediz).

Some established modest companies, such as the bodega where Usnavi and his cousin Sonny (Gregory Diaz IV) spend their days selling café with Leche, quarter waters, and other necessities. Across the street is a livery cab firm run by Kevin Rosario (Jimmy Smits), a Puerto Rican immigrant who has poured his aspirations into his daughter, Nina (Leslie Grace). Nina, the apple of his eye and the pride of the neighborhood — “the best of us,” as Kevin puts it — is a Stanford student.

She returns home for the summer, gripped by ambivalence as common in the Heights as open fire hydrants and piragua vendors. (Miranda, who played Usnavi onstage, appears as a purveyor of syrup-soaked hot-weather goodies, whose opponent is the controversial New York character Mister Softee.)

Usnavi recalls his Dominican Republic upbringing as the happiest years of his life. That island represents roots, origins, identity — everything that Nina associates with Washington Heights. He wishes to rediscover himself by returning to his father’s homeland. She is expected to recreate herself in a place Kevin, who never finished high school, can hardly comprehend. There may be no place like home, but in America, home is nearly never confined to a single location.

Miranda and Hudes created “In the Heights” long before “Hamilton,” but the film version, which arrived after the “Hamilton” avalanche, functions as a sequel in some respects. Usnavi, like Alexander Hamilton, is an orphan and an immigrant. His neighborhood is named for Hamilton’s commander-in-chief. And its citizens plant their flags in the land of the $10 bill, including Cuban, Dominican, Puerto Rican, Mexican, and others. The city may be a utopia where “the streets are made of music,” but it is also a purgatory of bitterly cold winters, deep-seated intolerance, and bureaucratic cruelty.

These complexities serve as both the film’s framework and its subject. Miranda is a political romantic and a passionate optimist at heart. Some viewers may want more nuanced examinations of themes like gentrification and immigration policies, as well as a critical viewpoint on family, sexuality, and gender.

But, while Miranda is a revolutionary artist in some aspects, he is far from a radical. He believes in the redeeming promise and democratic potential of popular culture, which includes not just commercially marketed music, movies, and dance, but also streetwear trends, block parties, and home-cooked meals, as well as the supremacy of love.

As a result, “In the Heights” arranges its tumultuous plot around parallel love tales. Usnavi is head over heels in love with Vanessa (Melissa Barrera), who wants to relocate downtown to pursue a career in design.

(She works in Daniela’s salon, which is owned by the wonderful Daphne Rubin-Vega.) Meanwhile, Nina is still in love with Benny (Corey Hawkins), her ex-boyfriend and Kevin’s loyal dispatcher. As the weather heats up and the power goes out, the two lovers sing their way through longing, lust, disappointment, and happiness – not always in that order, but with an ardent sincerity capable of melting the coldest heart.

The film, like Usnavi, puts its heart on its sleeve, bristling with ideas, linguistic humor, and musical innovation. It also symbolizes his character traits: charity, decency, hard work, and pride. Ramos’ personality fits the part nicely. His modesty is as endearing and genuine as his swagger, and he’s both a terrific theatrical singer and a sensitive film actor. To suggest he dominates the screen would be unjust to the rest of the superb cast and dishonest to the inclusive, familial ethos that makes “In the Heights” so appealing. He’s the one who keeps the party going and is the reason it’s even happening.

It’s a fantastic celebration, complete with fireworks, dance floor blowouts, kisses, tears, loud debates, and even more kisses and tears. That is not the same as a wonderful film. There are some plot holes and sequences, especially musical pieces, that are adequate when they should be spectacular.

Even though it had a somewhat long-running duration, I didn’t want it to finish. Chu knows how to provide a good time for everyone. The nightclub, swimming pool, and beauty salon sequences are upbeat and friendly, even if they aren’t very memorable or creative in terms of cinema. The editing and camera movements, which slice beautiful and athletic motion into a frantic patchwork of faces and limbs, undercut Christopher Scott’s explosive choreography.

One remarkable exception — an emotional high point in the film — is Abuela Claudia’s song “Paciencia y Fe,” a gorgeous, piercing remembrance of exile and adaptation. She recalls her exodus from Cuba as a little girl in the 1940s as she nears the end of her life. There is bitterness in the recollections of what came next, as well as estrangement and difficulty, to go with the patience and trust. Dancers in flowing linen robes and head wrappings twirl and lunge on old subway vehicles as she sings.

Miranda’s brilliance as a composer and lyricist is confirmed in the song, as is his specific genius as a cultural historian.

The pictures invoke both Caribbean dance traditions and midcentury choreographic modernism, while the music blends Latin American idioms on top of a solid show-tune foundation. The synthesis is a revelation in part because it reveals crosscurrents and influences that have always existed, even if they were not always recognized or represented in this manner. 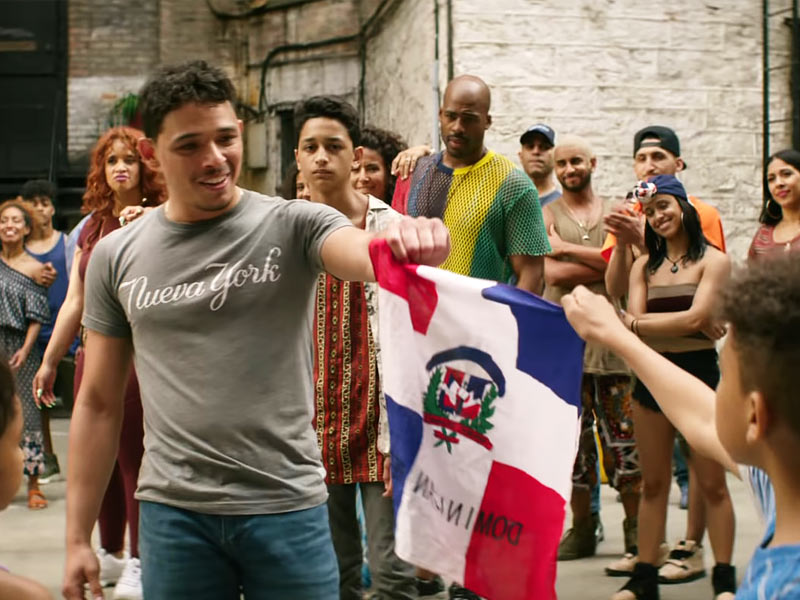 And “In the Heights,” which premiered on Broadway in 2008 and was scheduled to be released in theatres the following year, feels as fresh as a freshly scraped piragua on a scorching July day and as permanent as the girders of the George Washington Bridge. It’s popular American entertainment in the finest sense – an expression of impatience and faith, a celebration of communal bonds and individual bravery, a testament to the ability of art to transform adversity into the stuff of dreams.