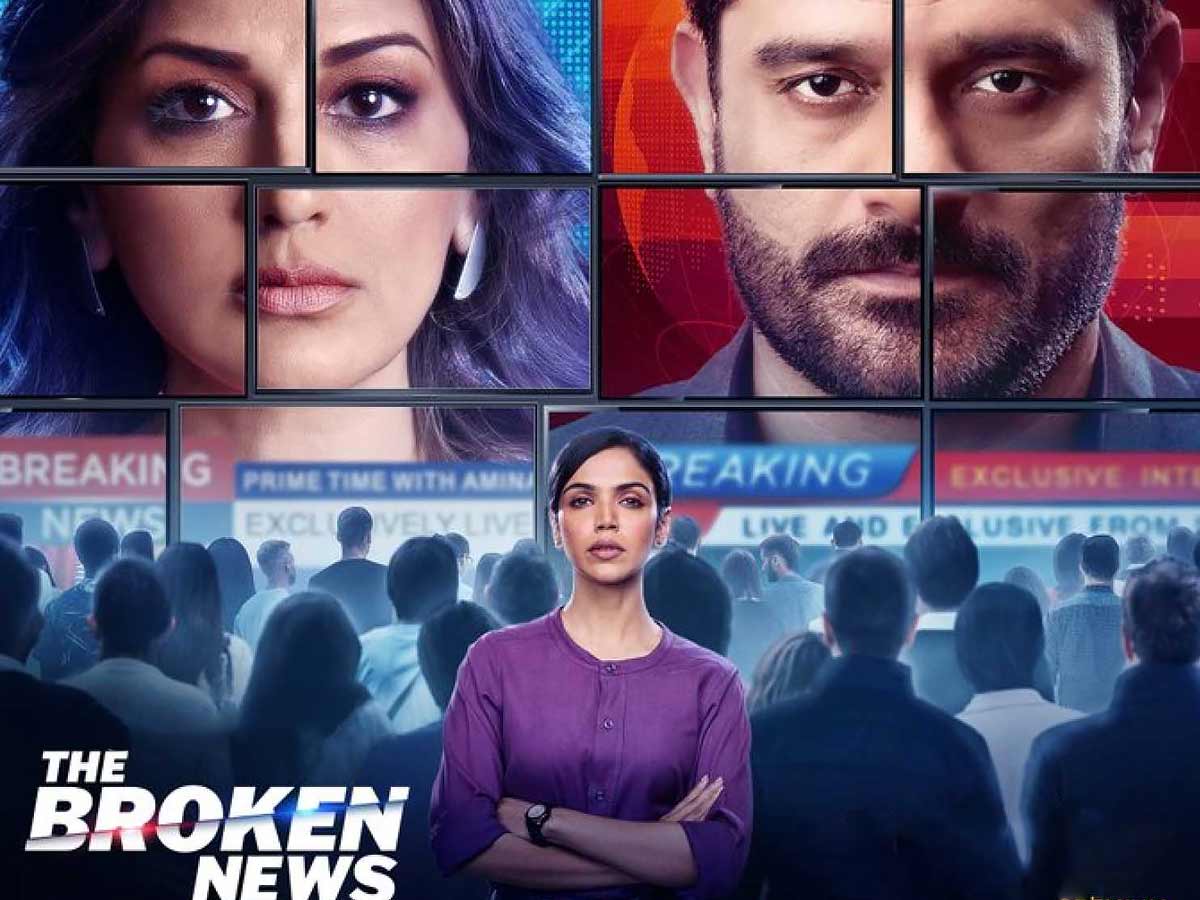 The Broken News frequently feels behind the current news cycle. The Zee5 show debuts at a moment when the old argument over sensationalism and crooked ratings has given way to a far more destructive trend: the expansion of hatemongering, government propaganda, and plain fakery on Indian television.

Can fiction ever match real-life deception? The eight-episode online series, at its best, is a cautionary story about how we got here — the murder of journalistic truth that precedes the slaughter of reality itself.

The show is an official remake and update of the British sitcom Press, which centered on rival newspapers. The Broken News, adapted and directed by Vinay Waikul (who also directed Aranyak on Netflix) and written by Sambit Mishra, follows two rival news programs with opposing ideas on how the day’s headlines should be presented.

Dipankar (Jaideep Ahlawat), the editor-in-chief of Josh 24×7, stoops to conquer viciously. He has no qualms about paying sources for stories and destroying reputations in pursuit of primetime dominance. Dipankar yells at his scared staff, “Where are the bites of the gay boy’s mummy, daddy, and boyfriend?” when a closeted student commits himself.

Dipankar’s network operates three stories above Awaaz Bharati, where Amina (Sonali Bendre Behl) heads a team of journalists attempting to practice journalism as it is taught in college. Radha (Shriya Pilgaonkar), the kind of tenacious investigative journalist Dipankar used to be, is her newsroom star.

Radha chases stories that could jeopardize the future of her channel and herself. Along with investigating a deadly project known as Operation Umbrella, Radha is also investigating the inexplicable death of her roommate in a fire.

The series, like its characters, walks a fine line between what may and cannot be expressed. It’s difficult to ignore the irony of viewing a show that praises unfettered media during a period of widespread state and unofficial control.

The Broken News takes place in Mumbai rather than Delhi. Rather than the Union government, Operation Umbrella has ties to Maharashtra’s home minister.

Over the closing credits, a wonderfully sung version of Faiz Ahmed Faiz’s motivating poem Bol Ke Lab Azaad Hain Tere plays. Despite the constant twists and detours into Dipankar and Amina’s personal lives, the “say it while you can” philosophy endures.

Meetings in dimly lit parking lots are common, as are hot tips sent in envelopes labeled “confidential,” a nod to the classic journalism film All the President’s Men.

A recent media controversy fueled the plot that threatens to engulf Radha and her channel. The realization comes only after many of the tropes connected with fictional depictions of television media have been established. The creators of The Broken News save their best material for the later episodes, which crank up the pace and ultimately bring The Broken News closer to the actual headlines.

Sonali Bendre Behl, cast as a thinking woman for the first time in her career, is among the uniformly efficient cast members. Amina, played by Bendre Behl, deftly balances professional ethics with her channel’s dwindling revenues.

Dipankar’s spineless employer is played by Akash Khurana, and Radha’s honest coworkers are played by Faisal Rashid and Sanjeeta Bhattacharya. Srikant Yadav is the scheming home minister, and Taaruk Raina is a shady reporter at Josh 24×7.

In the first episode, Radha declares that criticizing the government is patriotic. The “You go girl!” applause for the principled but naive Radha, whose acts are not always plausible, are revealed in flashbacks. Shriya Pilgaonkar plays Radha with vigor and devotion, guiding her character into unnecessary quandaries and inescapable controversies.

Dipankar, a composite of every unethical channel boss in the real world, is maybe unsurprisingly the most credible newsroom animal. Dipankar is immoral, obnoxious, and bullying. He’s also full of contradictions, capable of being predatory one minute and sensitive the next.

Dipankar also has the best lines, which are delivered at just the correct pitch by an amazing Jaideep Ahlawat. News is dull, so I fabricate stories! You must thoroughly prepare a story before serving it!

Ahlawat brings an unlikeable figure to life. He occasionally steals the thunder of his co-stars in the same manner that Josh 24×7 scoops Awaaz Bharati.

If Awaaz Bharati is about ideas, Josh 24×7 is about transactions, as one character puts it. The reprobate turns out to be more newsworthy than the woman willing to martyr herself for her cause in the race to the top of the rating curve and the bottom of morals.