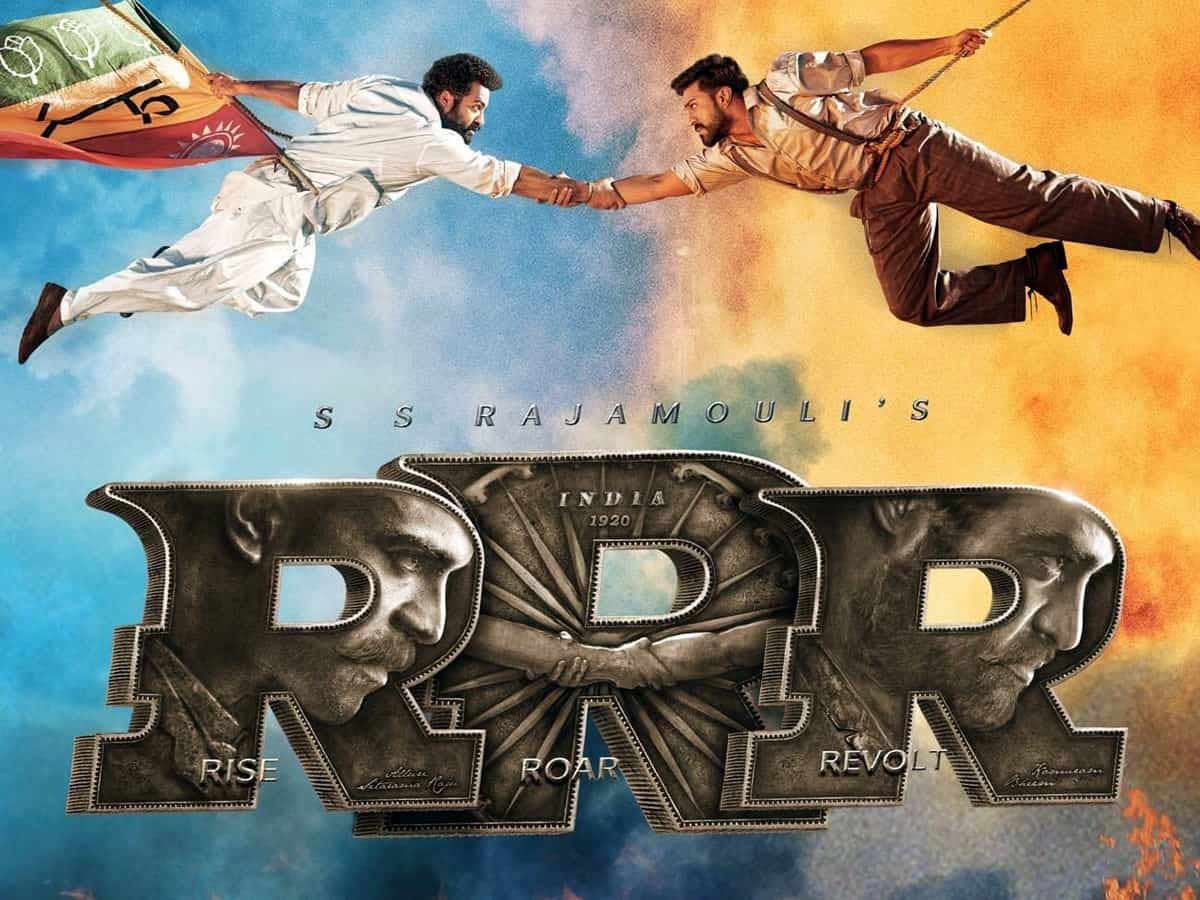 RRR, directed by Rajamouli and starring Ram Charan and Jr NTR, has opened in theatres today. The picture was released to much acclaim and expectation. Please continue reading for our review of RRR.

Set in the 1920s, RRR follows the fictitious story of two of India’s finest and most underappreciated independence warriors, Alluri Seetharama Raju and Komaram Bheem. Can Rama Raju and Bheem rise as a united front and conduct an unyielding struggle against the British? Will they be able to complete the process?

Malli is abducted by Britishers for her exquisite singing in the Adilabad area of pre-independence India in the 1920s. Bheem (Jr NTR) is tasked with bringing her back, while Raam (Ram Charan) accepts the bounty to apprehend him.

Raam, did you capture Bheem? The primary assumption of RRR is whether or not he realized his foolishness and assisted Bheem in his endeavor.

After producing epics like Magadheera, Eega, Bahubali: The Beginning, and Bahubali: The Conclusion, among others, SS Rajamouli returns with another huge budget extravaganza, RRR, starring Jr. NTR and Ram Charan, as well as Alia Bhatt and Ajay Devgn. RRR is set in the pre-Independence era, with basic problems produced by the British Empire’s demons. The filmmaker pulls a thread from two real-life people, Alluri Sitarama Raju (Ram Charan) and Komaram Bheem (Jr. NTR), and weaves a fiction story around their lives.

As promised, he paints the globe with a new brush in this historical drama from the 1900s. In terms of Indian film, he generates pictures never seen on the big screen before. He creates drama that takes a little influence from the worlds of Manmohan Desai, Ramesh Sippy, and Kader Khan and turns it around with his larger-than-life vision, giving it a distinct character. Rajamouli and his writer father, KV Vijayendra Prasad, don’t waste time getting to the central tension. You’ll find yourself hooked in the plot minutes into it. Despite a run of 1 hour 45 minutes, the first half flies quickly.

The narrative is established in the opening frame of RRR, followed by extravagant introductions of the two heroes – Ram Charan and Jr. NTR. Rajamouli establishes his narrative and the mindsets of two characters in the opening 25 minutes. From then, the story is laden with dramatic, humorous, and action situations, one after the other, padded with some breath-taking cinematography that doesn’t allow you to take your gaze away from the screen for even a single second. Every shot exudes grandeur, and the intermission segment is undoubtedly the greatest seen on the big screen in Indian film.

The extended intermission block is flawless in every way, from the build-up to that moment, to the camera work and the wonderfully planned stunt design. While it is common to see references to action scenes in Indian films, every shot and stunt choreographed in RRR appears to have been created in Rajamouli’s imagination and accomplished by his action squad. The first half is a suspenseful drama, laying the groundwork for the notion to erupt in the post-interval moments.

However, this is when things tend to slow down a little. While the aspect of huge frames and unfathomable shot-taking remains, the tempo slows as the plot proceeds. The problem is that the RRR disagreement may be summarised in a single sentence. And if it hadn’t been for Rajamouli’s directing and his father’s talent to reach the dramatic highs, RRR would have been an average affair, a below-par product. The comparatively mild conflict begins to show in the second half, and even the moments get monotonous.

They slow down a touch in the second half, after a first-half filled with many moments to celebrate that even elicit chills. While the post-interval scene begins on a positive note with Ajay Devgn’s chapter, it gradually deteriorates in the episodes that follow. But, as they say, just as you begin to underestimate the master, he appears to astonish you.

SS Rajamouli, a superb storyteller, directs RRR. It is a character drama set in the pre-Independence era. The story revolves around the characters Bheem and Raam.

There is a formulaic approach from the start when seen superficially, like in the predictable rhythms. However, Rajamouli, the great storyteller, effortlessly overcomes it with high-octane introductions for his actors. Such a problem never occurs to us.

Both stars are presented in a fan-pleasing manner and are equally important to the plot. Bheem, on the other hand, excels because he is free of the narrative’s constraints. It is cinematically staged, whereas Raam’s introduction is conceptually done. The latter introduces a character while also moving the plot along.

RRR has a fantastic first half and a somewhat mediocre but fascinating second half. If you like any of the stars, it’s a no-brainer to see RRR. If you aren’t, the grandeur, larger-than-life nature of RRR makes it a must-see.

Also Read, King Richard: The Story of a Determined Father who Aims Glory

What about RRR actors’ on-screen performances?

The principal actors’ stunning performances propel RRR. Jr NTR and Ram Charan both performed admirably in their roles as Bheem and Ram, respectively. These two powerhouses work together to drive the machine, i.e., RRR, providing towering performances. NTR’s portrayal of the film’s rustic character Bheem, who represents the water element, is unearthly. Charan is in the same boat. He oozes anger and brutality throughout the film, elevating the fire aspect. Both heroes have delivered career-best performances. The director’s use of fire and water to represent the main characters is unconvincing.

Alia Bhatt has a brief but significant part. She is the epitome of elegance. Whenever she appears, she illuminates the screen. Ajay Devgan also has a minor but significant part. He is performing admirably. In their supporting parts, Samuthirakani and Shriya perform what is asked of them. Olivia Morris, Bheem’s love interest, is stunning and emotes well.

What about non-actors of RRR?

SS Rajamouli, the ship’s captain, is one of the best Indian filmmakers of his period. His vision, execution, and tenacity are all of the highest calibers. It isn’t easy to execute a project as large as RRR, and Rajamouli just manages to meet fan expectations. RRR’s emotional level is not on par with the Bhaubali series.

NTR’s entering block outperforms Charan’s. The song Naatu Naatu is excellently delivered. It has a great plot, and both heroes light up the dance floor. The pre-interval segment is well-presented and powerful. However, there is some latency in the first half’s beginning moments.

The story’s major focus is always on the brotherly relationship between the two central protagonists and their interests rather than the freedom struggle. The second half begins on a sour tone but gradually improves as it approaches the conclusion. The audience experiences an emotional high in the scenario where Ram is forced to chastise Bheem. The climax is broken into three battle situations, each with a high moment for the audience. The film concludes on a positive note.

Senthil Kumar, the guy behind the lens, deserves special attention for his outstanding effort in capturing captivating sights. The production design, VFX, and CGI are up to Indian standards.

RRR is a film that glorifies Indian cinema in all of its grandeur. SS Rajamouli adds his concept of creating vast canvas drama with all the larger-than-life action centered on a mundane story of friendship. And it is his passion and capacity to dream large propels the universe of RRR to new heights, despite certain screenplay constraints in terms of a basic central conflict.

Nonetheless, RRR features the finest action moments in an Indian film, with an inconceivable intermission and a rousing conclusion. Be confident that, despite some shortcomings in the second half, you will be immersed in Rajamouli’s large canvas universe in the days when India was a “Sone Ki Chidiya.” It is rightly referred to as India’s biggest action drama.

The ensemble delivers great performances, while Rajamouli’s storytelling, grandeur, and glittering vistas power the picture. Despite taking certain cinematic liberties, Rajamouli manages to play to the gallery. Keeravani’s BGM enhanced a few key scenes. Despite the occasional slowness in both parts, the picture is worth seeing in theatres. It has the potential to blow up the box office.