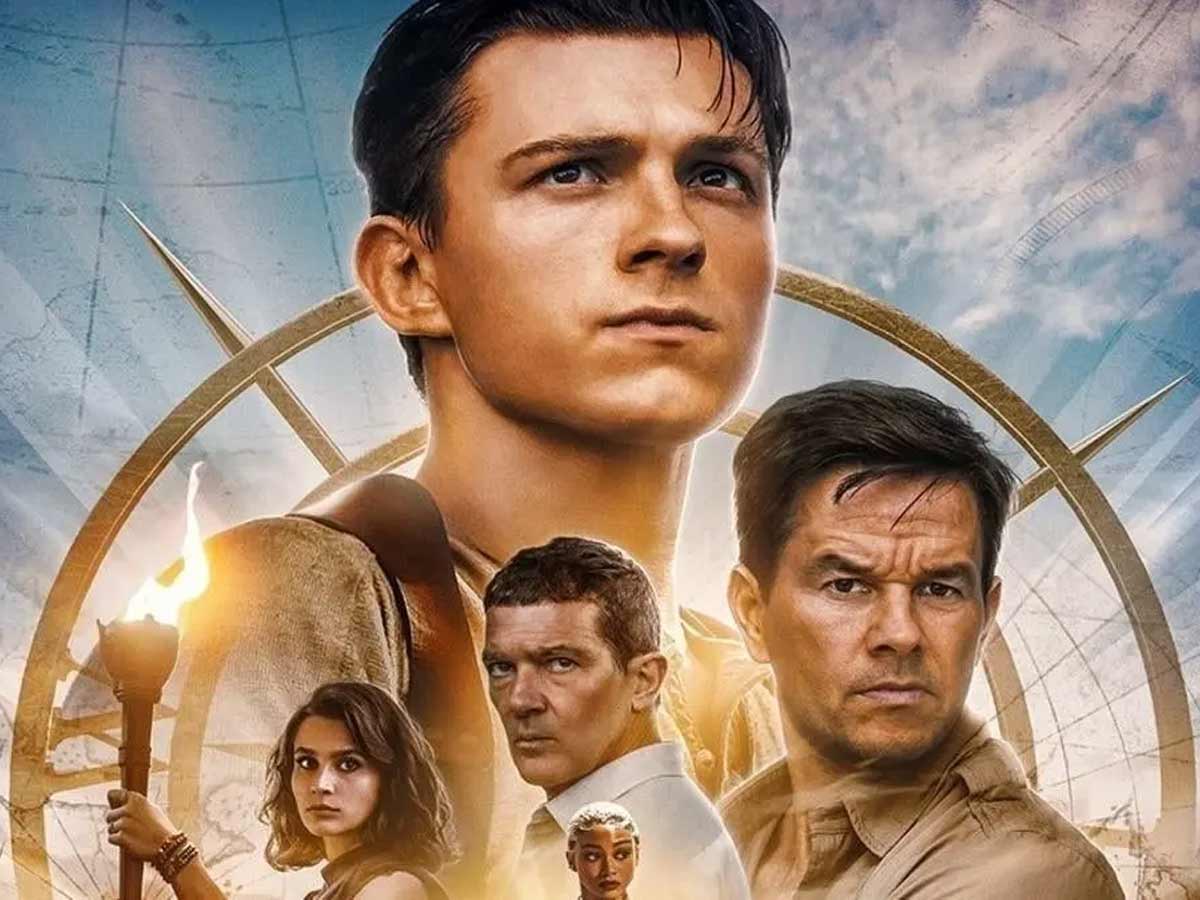 Tom Holland and Mark Wahlberg play Nathan Drake and Sully in the Uncharted Movie with no stakes.

In the vein of “Raiders of the Lost Ark,” “The Mummy,” “National Treasure,” and “Jumanji,” “Uncharted” draws into a familiar heritage of globe-trotting, roguish adventure, and conceals the influence of those previous films far better than you might anticipate.

The Uncharted movie is a straightforward, safe, but satisfying debut to treasure hunter Nathan Drake. Fans of the beloved PlayStation games may be surprised at how much has changed to fit an Uncharted movie story into a single film’s runtime – it crams in a new origin story while reenacting action sequences from multiple games – but it all adds up to a decently fun sampling of what Nate and Sully have to offer on the big screen.

The Uncharted games have never been about real action. Still, certain scenes in the film adaptation push the fantasy a little too far. (There’s some business with a sports automobile that would humiliate Dominic Toretto.) It’s as if no one thought about how cartoonish mayhem would play out in the setting of a two-hour film that alternates between serious and funny.

There’s no place for any spectacle to stand out or for the characters to naturally create a relationship. Various battle scenarios are spliced together quickly and choppily, surrounded by evident green screens. That’s especially disappointing, given that the four primary Uncharted games regularly pushed the visual boundaries of what the PlayStation 3 and PlayStation 4 were capable of.

The Uncharted video game series protagonist, Nathan Drake, possesses a ring that he says belonged to his forefather, Sir Francis Drake. It is inscribed “Sic Parvis Magna,” which means “Greatness from tiny beginnings.” That philosophy was reflected in the game series. The modest initial installment produced three direct successors, each better than the previous.

What makes a film based on a video game more soulless than the game itself? The gaming industry has often been chastised for lacking a human aspect. Still, Ruben Fleischer’s “Uncharted” feels even more devoid of humanity than the award-winning game on which it is based. “Uncharted movie,” dominated by green screen spectacular effects and weak treasure-hunt storyline, inherently lacks the feeling of adventure that made the Sony games some of the most cherished of all time. Most surprising is how much more cinematic the games themselves feel about world creation, character, and plot than the real movie.

However, Uncharted’s grandeur is not mirrored in the movie adaptation. It’s a modest start for a potential Sony cinematic franchise, but it’s yet another flop of a video game adaptation. A glimmer of sequel potential is hidden in a second post-credits scene, where a sudden burst of chemistry in the riffraff banter between treasure-hunting pals Nathan Drake (Tom Holland) and Victor Sullivan (Mark Wahlberg) is sure to make people wonder where such lively line deliveries have been for the previous two hours. Everything about the characters feels correct for a split second, but it comes much too late.

Throughout the film, director Ruben Fleischer and screenwriters Rafe Judkins, Art Marcum, and Matt Holloway ping-pong between as many gaming franchise characters and new additions as they can fit into one origin narrative. Characterization in the game series is more concise and robust. In the first chapter, the Drake-and-Sully combo serves as the thieving core before the designers extend their lineup and flesh out their narrative in the following installments.

The series’ antagonists have never been very intriguing. However, there is some personality behind motivations, such as pursuing the Tree of Life to obtain perpetual youth or magicians aiming to sever Nathan and Sully’s strong bond. That vivacity is also lacking in the cinematic adaptation.

The cinematic adaptation appears to have been given numerous components of adopting the Uncharted formula, such as puzzle-solving, sneaking around, parkour, and larger-than-life action. The broken tale makes introducing and alternating between so many distinct people even more challenging. Even without the burden of introducing so many individuals, the decisions powering Uncharted movies are devoid of stakes, meaningful threat, compelling historical twists, or adrenaline-pumping adventure.

Nathan Drake (Tom Holland) was created to nod to Indiana Jones and the serial adventure films that influenced him. He should be a smooth-talking treasure hunter, operating in a morally ambiguous zone where taking precious items is justified since no one can truly appreciate them like Drake. Holland possesses the agility required for a character like Drake. He was raised in an orphanage and is prepared to steal to make ends meet. Suppose Indiana was always the smartest person in the room. In that case, Drake needs to be the one with the sharpest instincts, someone who views history’s riddles with skill and fearlessness.

Holland is a talented actor, but he’s miscast here, appearing like a child dressed up as his favorite video game character.

While working at a bar and stealing jewelry from his customers, Drake is contacted by Victor Sullivan, aka Sully (Mark Wahlberg), who informs him that he and Nathan’s brother Sam came dangerously close to discovering one of history’s most renowned lost riches. They took the great explorer Juan Sebastian Elcano’s notebook, which would lead them to the wealth concealed by the Magellan expedition.

They soon meet Santiago Moncada (an underused Antonio Banderas), the heir to the family that supported the previous expedition. The fierce Jo Braddock enforced Moncada’s will (Tati Gabrielle). The guys meet with Sully’s former colleague Chloe Frazier in Barcelona (Sophia Ali, who pretty much steals the movie).

The Uncharted movie bounces these individuals off each other on a voyage through Spain and the Philippines, but nothing seems substantial. It’s green screen acting that ignores how important a setting can be in a film like this. Whether Nathan and Chloe are going down a drab cave to bury treasure or Sully is getting into one of the few fight sequences at a real Papa John’s, design is never a factor.

We must embark on the adventure rather than simply watching actors pretend to jump out of aircraft. The “Uncharted” games transport players all over the world. This chilly, distant adventure picture will never give you that sense.

The relative attractiveness of the ensemble is what saves the Uncharted movie from the depths of the worst video game adaptations. Holland may be miscast, but he’s an enormously appealing movie star, and I hope he can find roles that make greater use of his charms. Wahlberg strikes a wonderful mix between his charm and the tired tone of a treasure hunter who has seen and done enough and is looking for that one last job that will put him up for life.

Banderas is wasted, and Gabrielle is unreliable. Still, Ali is likely the only performer who understands that the Uncharted movie is supposed to be entertaining. She adds much-needed excitement and unpredictability to the film when she’s on-screen.

Nathan Drake wishes to be Indiana Jones’s next-generation equivalent four decades after being dragged behind a truck, which is why only being pulled behind an airplane would do. That doesn’t make the Uncharted movie fantastic. Still, for better or worse, you can probably get the same kind of joy from watching Nathan complete just one or two of its single-serving obstacles as you would from attempting to lose yourself in the overall superficiality of the voyage.

The Uncharted movie is another project that has gone through so many different development teams over the years that it has lost its uniqueness.

When a project goes through so many versions over time, it may sometimes result in a final film that feels like a compromise. This watered-down version takes the most common, most basic components of everything recommended over time. The Uncharted movie ticks all the boxes for enthusiasts and newcomers alike. Still, it does it predictably that it lacks any edge or flare. I’ve played several “Uncharted” games from start to finish numerous times, which is a multi-hour commitment. It may only take two people to watch it, but I doubt I’ll ever see it again.

Overall, it’s no surprise that Sony’s Uncharted movie sat dormant for nearly a decade due to a rough route to production. It’s not a horrible picture, per. Still, it delivers nothing in terms of new value. It contradicts itself with a too-familiar tale that contradicts its ostensibly reinvented characters.

Also Read, Ubisoft Insider Says Map Would Be Larger Than Valhalla. The Next Assassin’s Creed Game Might Be Set in India

Despite their best efforts, Uncharted’s primary actors will drive off returning fans, and the film’s lack of character – save for some well-choreographed battle scenes – reduces it to mindless, useless entertainment.

Instead of looking for wealth, Nathan Drake should look for some innovation in the inevitable sequel.