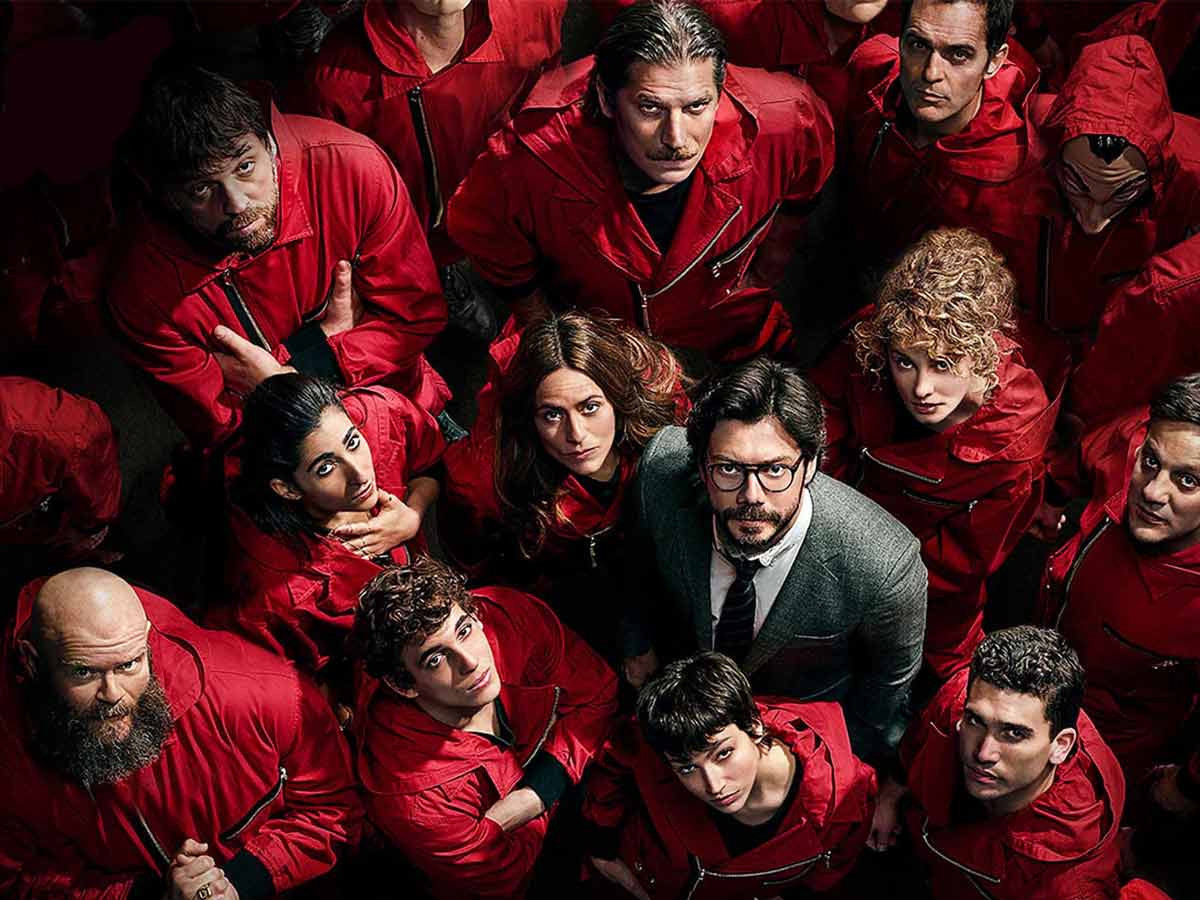 Money heist season 5 is now set on fire on September 3rd. Heist fans have been anticipating Season 5’s suspense for more than 1.5 years. However, according to recent announcements, Money Heist Season 5 will be divided into two volumes. Vol. 1 is now available, and Vol. 2 will be available on December 3rd. The Vol 1 chapter ended with yet more suspense. To discover more about the plot, read the article below.

The plot of Money Heist Season 5: 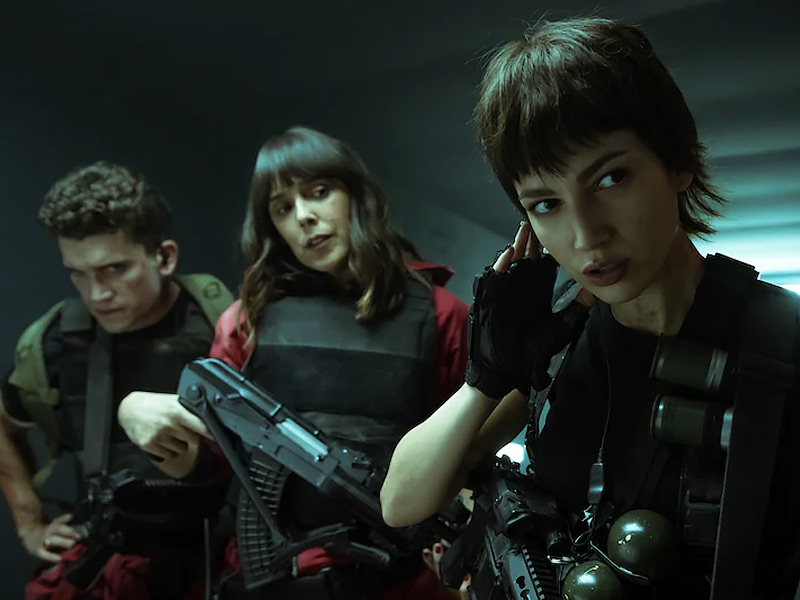 For four seasons in the Spanish crime thriller Money Heist, The Professor has developed creative solutions to get out of sticky situations. However, when Netflix’s enormously popular series (also known as La Casa de Papel) returned Friday with the first half of its highly anticipated Season 5, everyone’s favorite mastermind appeared to be at a loss.

If his perplexity is to be believed, the Professor never expected disgraced inspector Alicia Sierra to have the start on him. He also had no idea the ruthless pregnant woman would lock him up, torture him, and shoot him in the left foot – but she did. Sierra even had the Professor radio his staff, who had been locked up at the Bank of Spain for more than 100 hours, to apologize and effectively say farewell.

The defeat was tangible and plausible — but this is the Professor we’re writing about. At the end of Season 4, the same man not only helped his girlfriend Lisbon escape police prison but also dropped her off at the Bank of Spain to join the other Dali-mask warriors wearing wildlings in their team.

The crew members had begun to fracture under the pressure even before the Professor declared he didn’t have a Plan B, and Lisbon confirmed it. To begin with, they are all still in grief for terrible Nairobi. Furthermore, Bogota informed Palermo that melting down less gold and removing it too soon felt like a wonderful way to get killed or arrested.

And now that Manila has revealed herself to be a robber disguised as a hostage, Stockholm is losing her cool because Manila was meant to be her and Denver’s Plan B for Cincinnati’s parental guardianship if the couple does not survive. But that’s all for now.

In Plan Bs, the flashback featuring Berlin and his adopted son Rafael gave the sense that the Professor’s nephew could be his backup plan. After all, he’s an MIT graduate with degrees in electrical engineering and cybersecurity. He’s not going to abandon his uncle, is he? 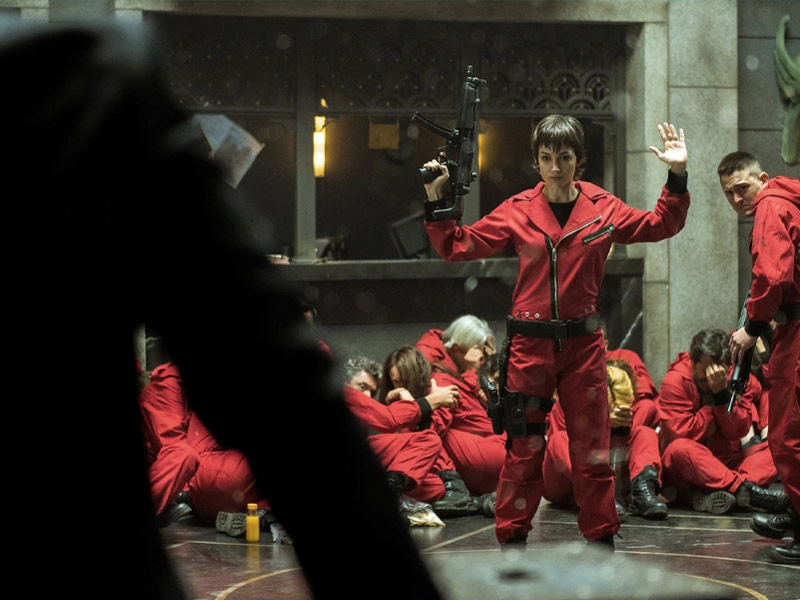 Despite the episode’s sad finish and the potential that the “Bella Ciao” bandits are doomed, the Season 5 premiere had some bright spots. Among these was Marseille’s escape from the military helicopter without being apprehended.

The lamb “farmers” who assisted were a particularly impressive touch. That being said, you have to feel sorry for the poor man who was forced to drive that red Volvo against his will to assist them in escaping. Isn’t it awful enough that the gang kidnapped this man’s wife from the beauty salon? Guys, come on. Have a good heart.

The heart is all that remains of our favorite robbers at this point. Still, with any luck and potential and much-needed assistance from Rafael, things can only get better. The Professor also needs to get away from Sierra.

What occurs in the money heist season 5? (Major Spoilers ahead)?

The last season closed with Colonel Tamayo promising Sierra that she will be held fully accountable for everything on the police side. She went on her own to take down The Professor after losing her job (Alvaro Morte). Sierra, on the other hand, turned against them and joined Professor. She disclosed email conversations about the Algerian events, according to forensic investigation.

The professor is unsurprised by Sierra’s activities and informs her that all the evidence has been fabricated. Tamayo also informs the media that Alicia utilized underground servers to leak sensitive material to the Professor. Furthermore, Tamayo claimed that the heist’s mastermind paid him 8 million euros.

Sierra is now a traitor to the government, and she is attempting to clear her name while working. Meanwhile, the group inside the bank has taken heart because Professor is not being held by the police. They come up with a plan for dealing with the troops. Sierra, on the other hand, is experiencing labor pains and requires assistance. The professor cautions her that she would lose the baby if she refuses to let them help her. As the episode concludes, Professor assists Sierra in delivering the baby at the warehouse. The audience realizes the army has begun firing at the bank. 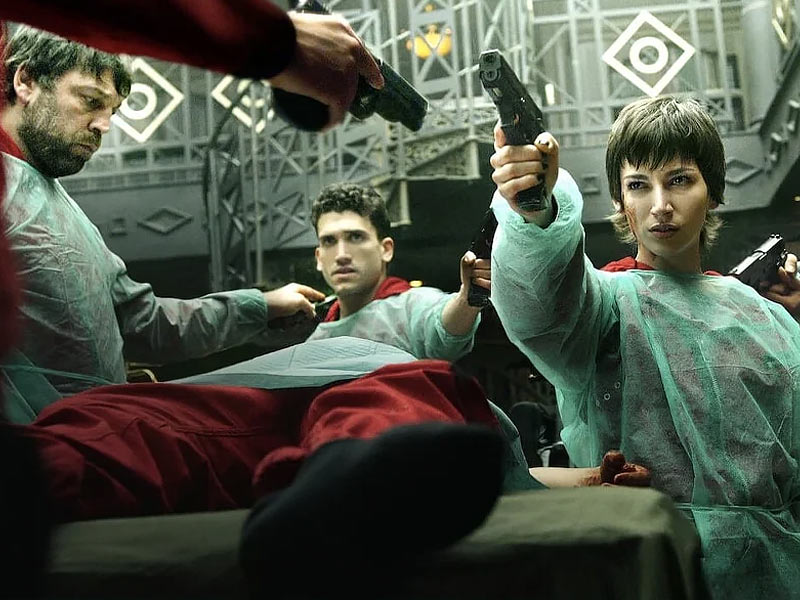 On the other side, the Military force, with its 12 soldiers, including Gandia, entered the bank of Spain by clearing the rooftop of the bank with explosives.

Military man Sagasta and his squad have pinned Tokyo, Denver, and Manila into the Bank of Spain’s kitchen, bracing the doorway with a heavy-duty stove countertop flipped on its side. The lump of metal shelters them from incoming fire as well as a decent angle from which to aim at their pursuers, putting Sagasta at an immediate disadvantage.

He chooses to create a second access point into the kitchen through the pantry, which Gandia objects to since it will take too long and allow the burglars another chance to flee. Sagasta dismisses his fears, but Tokyo overhears the conversation and uses it to provoke Ganda into breaking orders by throwing a grenade into the kitchen.

She throws the explosive bomb back out before it gets a chance to ignite, wounding Sagasta’s team and destroying Ganda’s reputation.

Sagasta follows through on his first plan, digging holes in the pantry wall to install explosives to allow them entry to the kitchen. Meanwhile, he directs snipers outside the building to zero in on the kitchen windows and waits for instructions to fire.

Tokyo detects a noise coming from the kitchen and goes to explore with Denver. She is frightened to see the squad bursting through the wall and shoots two members of Sagasta’s squad in the legs to disable them.

This, however, notifies the team of their location, and Sagasta directs the snipers to focus their fire on the pantry. Denver narrowly avoids being shot by a spray of bullets, while Tokyo takes numerous strikes to the body. Her wounds are non-lethal due to her bulletproof vest shielding her critical organs, but they make it difficult to use her arms.

That becomes a dilemma when Stockholm advises Denver that the only route out of the kitchen is by a service lift shaft, which will necessitate carefully lowering themselves down wires for six entire levels. Tokyo just cannot accomplish that in her current condition. Still, she instructs Denver and Manila to continue without her and to layer the bottom of the shaft with soft objects (e.g., cushions, etc.) as she will have to jump down to the ground.

Rio shatters and smashes the floor with his jackhammer. He keeps on trying to produce a hole close to the side of Tokyo’s hiding spot. The two cry as they hold hands through the opening between floors, but it is far too narrow for Tokyo to escape through.

The military team detonates its bombs in the pantry wall and storms into the kitchen. In hiding behind cover, Tokyo fires at them to buy some time but soon realizes she is severely outgunned and has nowhere to flee. She kisses her lover Rio goodbye and tells The Professor over the air that it’s time for her to be his guardian angel.

Tokyo could not bear the army and was hit by several more bullets from the squad and fell to death. When the squad checks on her, they discover that she has unpinned the four grenades strapped to her chest. They explode, killing Tokyo instantaneously and potentially taking the entire military team with her. 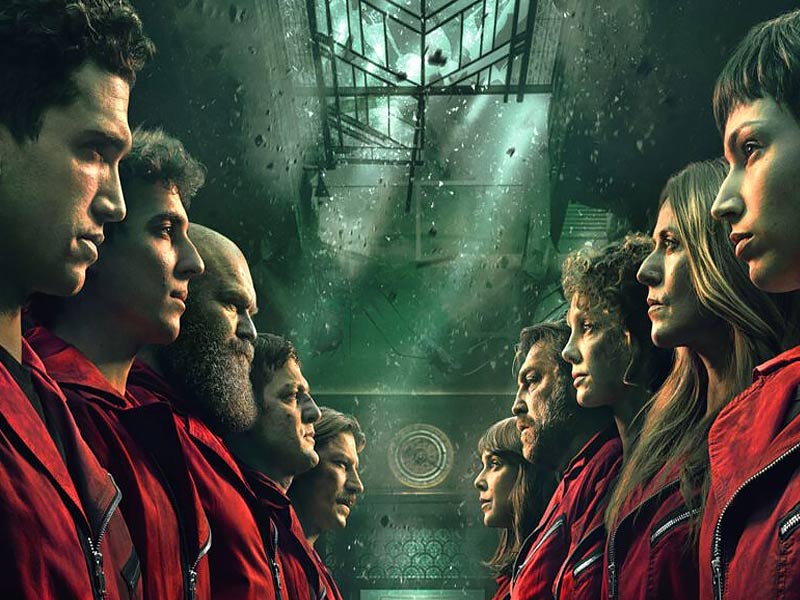 The season concludes with the remainder of the gang attempting to come to terms with Tokyo’s death before cutting to the release date of the final episodes: Friday, December 3rd, 2021. Please mark your calendars!

The fifth and final season has ten episodes in total. Money Heist Season 5 Volume 1 will include the following five episodes: The first episode is titled The End of the Road. Episode 2 is titled Do You Believe in Reincarnation? Here comes Episode 3: the Show of Life. The fourth episode is titled “Your Place in Heaven.” Finally, Episode 5 is titled Live Many Lives. Volume 2 will also include five episodes, though the titles have yet to be released.