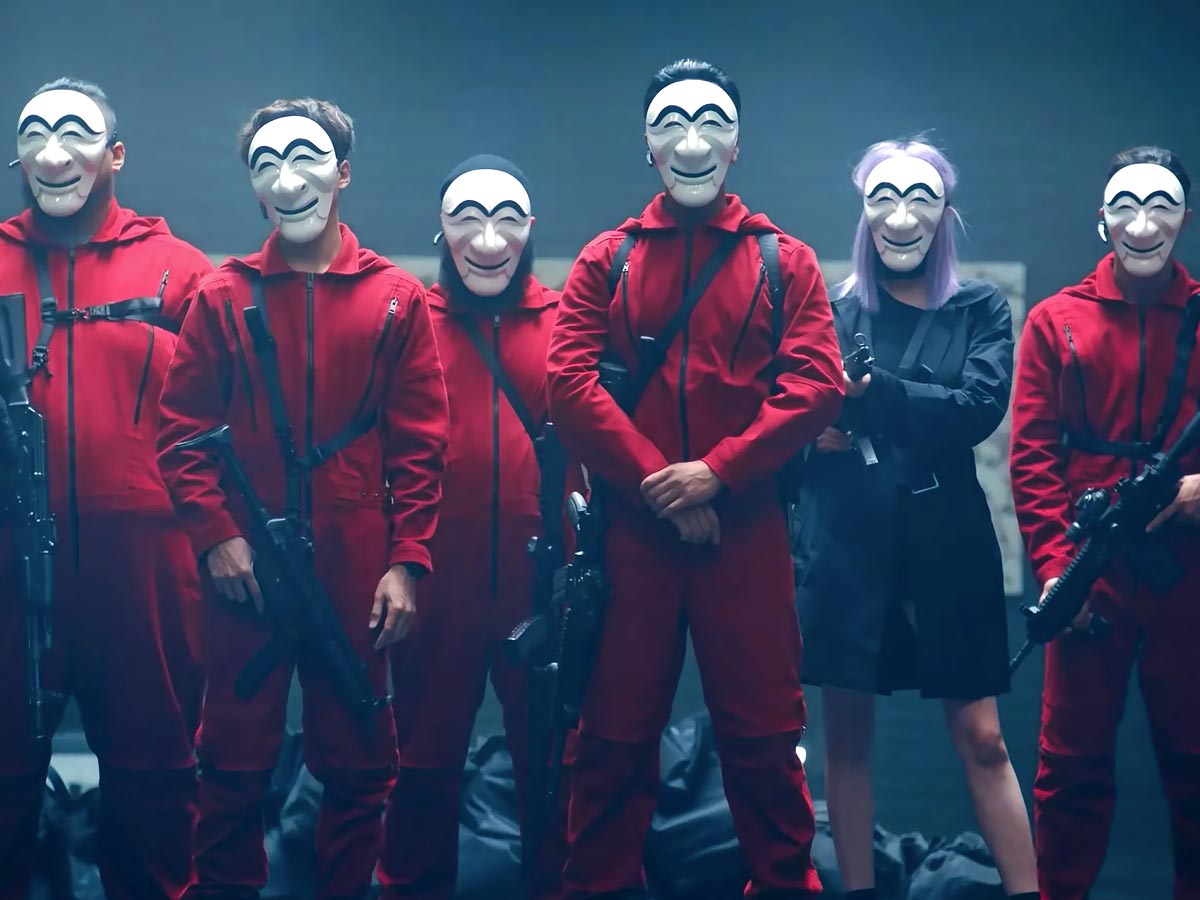 The Korean adaptation of the Spanish film “Money Heist” has finally been released as Money Heist Korea, and as was to be expected, the first episode included plenty of action, explosions, and stellar acting. Check out some of the best specifics below :

Tokyo (Jeon Jong Seo) is shown dancing to the song in North Korea as the episode opens to the thrilling music of BTS’ “DNA.” She modifies her personality when she joins the army, but everything changes when the unexpected news of North and South Korea’s reunification breaks.

She packs her bags and heads to Seoul intending to pursue the “Korean Dream,” but when she discovers the ugly truth of her choice, she loses everything and turns into a female Robin Hood to exact revenge on loan sharks. It’s at this point that she meets Professor (Yoo Ji Tae), an alluring man with a scheme.

The heist’s start and the professor’s squad :

Tokyo encounters the gang Professor assembled; each member has unique skills and peculiarities that make them the ideal team to steal 3 trillion won from the Mint.

The most sought-after man in North Korea is Berlin, the professor’s right-hand man (Park Hae Soo). The rest of the crew chooses names for their cities from all across the world and works assiduously to carry out the nearly ideal design.

Five months have passed, and we are now at the Mint where we see Jo Yeong Min, the opportunistic director (Park Myung Hun), and Yoo Mi Seon, the secretary who is having an affair and may be pregnant by the director (Lee Joo Bin). One of the schoolchildren who go to the Mint is the daughter of the director of the US Embassy.

The crew pulls together a complex ruse to get inside the Mint, where they hold all the inmates’ hostage. They bind their eyes and make them stand in rows as they open the safe. After accepting the money, they stage an escape by pretending to leave the area and calling the police so they can re-enter, which is when their true motives are revealed.

In this situation, the negotiators—police inspector Seon Woo Jin (Kim Yoon Jin) and North Korean police official Cha Mu Hyeok (Kim Sung Oh)—appear. Seon Woo Jin and Cha Mu Hyeok are at a crossroads regarding the approach, but Cha Mu Hyeok gains the upper hand and takes advantage of the situation to send in his troops. However, he soon realizes that the situation is worse than he had originally thought.

The episode comes to a close with the Professor and his team revealing their true motives for breaking into the Mint and pulling off numerous ruses: they planned to create money with untraceable serial numbers and vanish covertly. The shock factor increases when it is revealed that Seon Woo Jin’s date is the professor, and that is when things start to get really intriguing from the outside.

You become engrossed in the first episode just by the twists and turns, cinematography, acting, and other factors. The underlying story, the use of masks, and the supporting stories that bind the drama together give this series when compared to the Spanish counterpart, a slightly distinct vibe with a touch of Korean flavor. From the very first frame, it was clear that the writer and director had a good working relationship.

Also read: Money Heist Season 5: The Grand Finale | An End or is It?

K-Dramas may feature less-than-stellar actors, but that’s not a problem here because the core cast includes seasoned actors like Yoo Ji Tae, Park Hae Soo, Kim Yoon Jin, and more! The characters have also benefited from the addition of newer actors like Jeon Jong Seo, Kim Ji Hoon, Lee Hyun Woo, and others. Following the Korean tradition, the actors gave the characters such life that the audience felt a part of it as well. Everything was brought to life, including rage, desperation, passion, and more!

The tale was extremely effectively condensed into 6 episodes, and the timing of the turns and twists was excellent! The drama had it all, from the professor coming up with his scheme to falling for Police Inspector Seo Woo Jin to the squad dissolving and then coming back together in the end. Even the portrayal of the tension between North and South Koreans was put on hold, but they did an excellent job of gently displaying it.

The developing connections inside and beyond the Mint were nevertheless heart-fluttering, despite the lack of a strong romantic element! It was nice to observe how these couples developed, from Professor and Seo Woo-Jin through Yoon Mi Sun and Denver and Tokyo and Rio. The otherwise compelling plotline is slightly relieved by these plots.

Noteworthy for their chemistry is Denver and Moscow :

We hold a particular place in our hearts for the father-son team because of the incredible chemistry they exhibited throughout the drama. Despite their own struggles, these two’s love for one another knows no bounds as they risk their lives for one another. Their friendship is undoubtedly one of the reasons to binge the series, from their debut sequence to casual interactions.

Park Hae Soo, who had a reputation for playing sneaky characters in “Squid Games,” didn’t hold back when playing Berlin in “Money Heist,” and at times it made us dislike the character.

Berlin is misunderstood, self-centered, and cruel, and these traits are evident in the way he treats the captives because it is the only method he is familiar with. Although it is clear that he doesn’t understand the concepts of teamwork, brotherhood, etc., his character development was equally impressive.

Yoo Ji Tae, who played Professor and was the man of the moment, did a fantastic job of controlling and erecting new barriers for the police and other strong individuals. Although his past was not fully revealed, it appeared that he was out for the strong politician who had been Seo Woo Jin’s ex-husband. Although his emotional issues were impeding him, he remained focused on his goal.