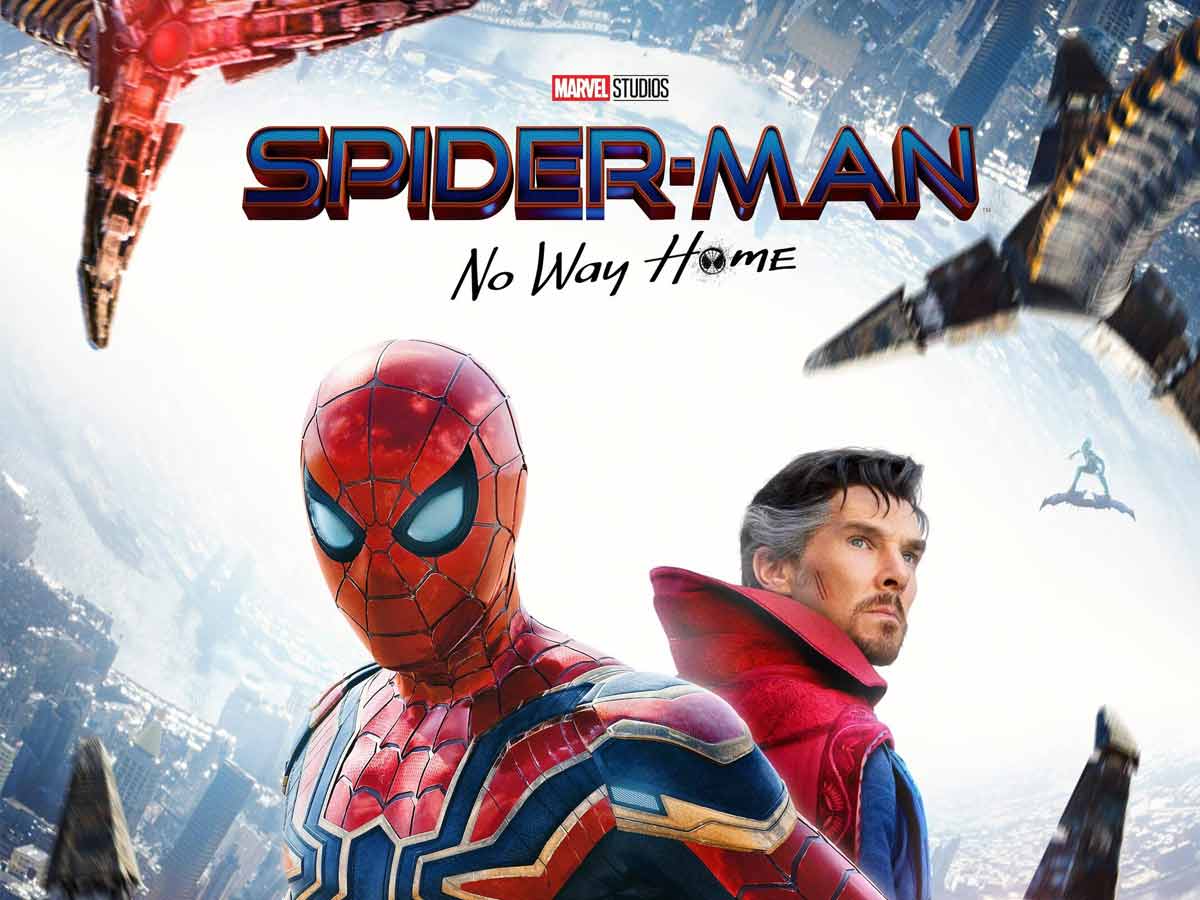 If only there were instances of a ‘Spiderman No way home ‘ movie with too many enemies in history.

What happens when a Saturday morning cartoon meets heavy MCU drama? Please, more of this.

For most studios, once-in-a-lifetime blockbusters are pipe fantasies, but here’s Marvel showing once again that they have us all in the palm of their hands. Spiderman No Way Home strikes a delicate balance between a Saturday morning cartoon and the serious drama we expect from these epics. There are no spoilers here, but this movie will remind you again and again that there are many reasons Sony and Marvel held this one as close to the vest as possible.

Although there is so much we can’t cover here, there are plenty of details to explore, since Spiderman No Way Home is certainly never dull. This is because of outstanding results across the board. For casting, the MCU as a whole has never been a slouch. Some of the world’s top performers now play their own Marvel characters. But, whether it’s the pandemic or Spiderman No Way Home’s lack of buildup from previous MCU chapters, the performances here feel unique.

Willem Dafoe is fantastic in everything he does, but his portrayal of Norman Osborn is one for the MCU record books. His character, like the rest of the villains that make their way into Peter’s reality, is given fresh complexity that previous Spiderman films never explored.

That groundbreaking series addressed several apparent issues. In contrast, one might wonder what problems are being addressed in Jon Watts’ Spiderman No Way Home, in which Spidey and Doctor Strange open a rift between parallel dimensions, forcing Tom Holland’s Spiderman to face villains who appeared in films opposite Tobey Maguire and Andrew Garfield’s versions of the character.

Was the problem of “not enough fan service in Marvel movies”? This film is a perfect illustration of that tendency, in which brief moments of pandering make inside jokes, throw in unnecessary cameos, or bring back intergalactic bounty hunters because there aren’t enough Star Wars things on the market for Disney to sell.

The plot opens with the incident from the last film, in which Spidey is perched outside Penn Station when J. Jonah Jameson reveals his secret identity. Soon, the entire world realises that the man behind the mask is Peter Parker, and multitudes believe Jameson’s odd allegation that Spiderman is a war criminal.

Life becomes difficult for our hero and his friends Ned and MJ, who must deal with frequent media attention and awkward incidents at school. This renown somehow hinders the three geniuses from being accepted into any of the universities to which they apply. So Peter Parker travels to Greenwich Village hoping Doctor Strange may cast a spell that will conceal his identity once more. We don’t want to say more…

Attempting to write a spoiler-free review of Spiderman No Way Home is akin to attempting to write a restaurant review while being prohibited from discussing any ingredient other than salt. The flavour of Tom Holland’s third solo outing as the MCU’s Peter Parker lives and dies on its surprises; it’s less a “movie” than a series of capital-letter moments, designed from the ground up to be freed for years to come in those hidden-cell phone YouTube clips of audiences losing their minds in the aisles of an AMC. The trailer-promised Moments are present, as are a few additional Moments you might expect, as well as a dozen really surprise Moments nobody could have predicted.

It’s all exhilarating in the same way that a quick drop on a roller-coaster makes your stomach flutter, fleeting and weightless, because Marvel Studios is unrivalled at creating that special type of shared Spiderman No Way Home theatre pleasure after 13 years and 26 feature films. The MCU is still unbeaten in creating moments. Is it, however, capable of producing films? Spiderman No Way Home takes that idea even farther, especially with a cast this skilled and the core of a classic Spiderman narrative, this emotional being tugged in every imaginable direction by the multiverse.

That’s right, the Multiverse. Perhaps even one of insanity. It’s not fair to suggest that the setup in this picture is unimportant, but it feels like the Spiderman No Way Home is bored with the processes it needs to go through to get to when Alfred Molina’s Doctor Octopus clanks his way back into the Marvel Universe. The scene in which Peter is accused of murdering Quentin Beck (Jake Gyllenhaal)? Basically, he waved his hand away faster than anyone could have expected. Peter requesting that Doctor Strange (Benedict Cumberbatch) cast a spell on the whole human species in order to make them forget Spider-true Man’s identity?

Sure, he’ll do it; Strange and Spiderman have had at least two major on-screen encounters. What matters is that the spell fails, and reality is ripped open just enough to let in characters from earlier Spiderman films, including Molina’s Doc Ock, Willem Dafoe’s Green Goblin, Jamie Foxx’s Electro, Rhys Ifan’s Lizard, and Thomas Haden Church’s Sandman.

I will not lie: it’s a riot just to see these performers reprise their roles in the year of our Lord 2021. I’m a human being with a soul who, like the rest of you, has sentimental recollections of Chad Kroeger’s “Hero” dancing about in my brain. Sometimes Alfred Molina hurling many automobiles at Tom Holland is all that is required. If the one thing you’re hoping for from Spiderman No Way Home is a journey down memory lane, it’ll be nearly difficult to dampen your enthusiasm.

Dafoe, in particular, makes the most of his retaliation. It certainly helps that Willem Dafoe, face as terrifyingly rubbery as ever, is one of our greatest living actors; director Jon Watts really lets the actor play around in the murky Jekyll & Hyde layers between “Green Goblin” and the “Norman Osborn” still stuck inside that pointy gemstone head in ways that even the Sam Raimi films wouldn’t allow, and the result is a flavorful bit of comic book camp.

However, the threads that connect all of those extensive set-pieces and unexpected cameos—as thrilling as they are, and as loud as the in-theater boom will be—are so thin that you notice the table-setting to a disconcerting degree. Almost none of the returning villains seem like live-in characters anymore; they’re merely avatars who exist just to be identifiable until it’s time to perform their next Big Loud Thing.

This is especially true for Lizard, 99 percent a personality-free CGI presence indistinguishable from every other CGI comic book monster, and Electro, who Jamie Foxx has opted to strip of all identifiable character traits save the fact that he is played by Jamie Foxx. Even nostalgia fades, and you realize the multiverse is simply too crowded to breathe.

“With great power comes great responsibility,” but only if Peter sees the other side of the equation, how easily his power may be perverted. Holland gets to sell wrath in a manner we’ve never seen from him before, almost entirely justifying the MCU’s decision to portray Spiderman as more childishly stupid than bookishly brilliant.

It’s actually startling to witness the character both break down and grow up in this scene. Even when new people are introduced, Peter, Ned, and MJ remain the Spiderman No Way Home’s pounding heart, and all the extra bells and whistles mainly drown them out.

Again, the facts omitted from this assessment may fill their own Multiverse. Surprises, call-backs, small character beats that pack an emotional wallop, and one significant ehhhhhhhhhh story decision that evokes the worst aspects of comic book storytelling. It’s all there, the good, the bad, and everything in between. However, Spiderman No Way Home is rather clear on one point: Getting precisely what you want might be a shoddy bargain.